For the second year in a row, Detroit, Michigan, was named the most stressed city in America.

In an annual report, compiled by Wallethub, the Motor City was determined as the worst when it came to work, family and finances.

Detroit had the worst credit scores, the highest poverty rate and the lowest percentage of adults getting adequate sleep each night.

The bottom five cities all fell in the eastern half of the US: Cleveland, Ohio; Newark, New Jersey; Baltimore, Maryland; and Philadelphia, Pennsylvania.

Meanwhile, Fremont, California – a city that lies about halfway between San Francisco and San Jose – was once again crowned the least stressed city in the country.

It was followed by cities that mostly fell in Middle America: Bismarck, North Dakota; Sioux Falls, South Dakota; and Overland Park, Kansas – as well as Irvine, California, on the West Coast.

RANKED: THE MOST STRESSED CITIES IN AMERICA FROM 1 TO 182

THE TOP 10 MOST STRESSED CITIES…

…AND THE 10 LEAST STRESSED CITIES…

After assessing each city, the researchers provided grades out of 100, with the least amount of points indicating a better score.

Residents of Anchorage, Alaska, were found to work the most average hours per week, while those in Burlington, Vermont, work the fewest

Anchorage, Alaska, came in first as the city with the highest amount of working hours every week.

Researchers have found that working long hours increases the risk of smoking, drinking and weight gain.

And a French study, published last month, found the regularly working 10 hours or more a day raises the risk of stroke by almost 30 percent.

Meanwhile, east coast cities – aside from Missoula, Montana – had the lowest average of weekly work hours.

Interestingly, Bismarck, North Dakota – which was the second-least stressed city – was named the city with the least job security.

Reno, Nevada – which ranked 99 out 182 – came out on top as the city with the highest job security. 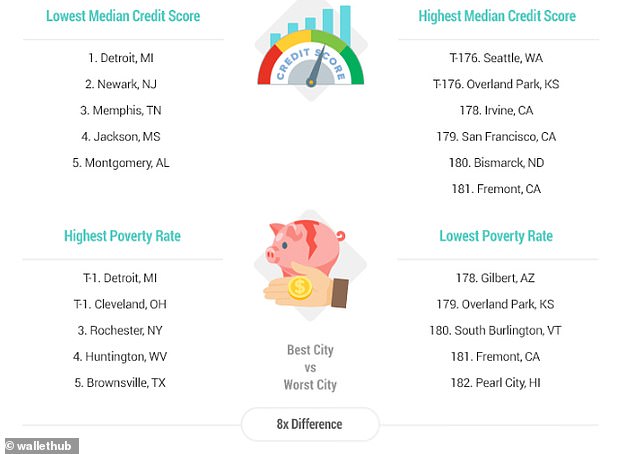 Detroit came first in both the lowest median credit score the highest poverty rate, the latter of which was tied with Cleveland

Detroit and Cleveland, the top two ‘most stressed cities’, tied for first when it came to the highest poverty rates.

Fremont, the ‘least stressed city’ came in second for the lowest poverty rate while Pearl City, Hawaii was first.

US census data showed that just 4.9 percent of persons in Fremont live in poverty, with the percentage dropping to 4.6 in Pearl City. 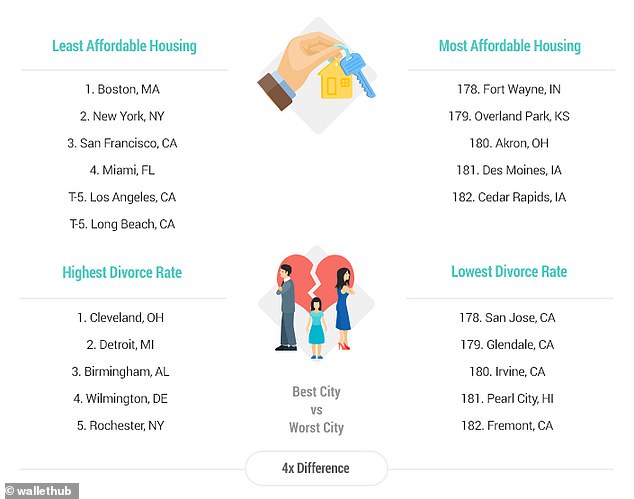 Boston, Massachusetts had the least affordable housing while Cedar Rapids, Iowa, had the least – a 77 percent difference between the two

California cities most dominated the list of cities with the least affordable housing but, in a somewhat surprising twist, Boston, Massachusetts, came in first.

Meanwhile cities in mainly Middle America had the most affordable housing with Cedar Rapids – rankled 174 out of 182 – taking the top spot.

According to real estate website Zillow, the median home price in Boston is nearly $600,000 – with home prices rising more than three percent in the last year.

Zillow named the median home price in Cedar Rapids to be about $134,000 – a 77 percent difference from Boston.

Divorce rates also added to family stress were divorce rates. Cleveland was ranked as the city with the highest divorce rate while Fremont came in last, along with a number of other California cities – aside from Pearl City, Hawaii. 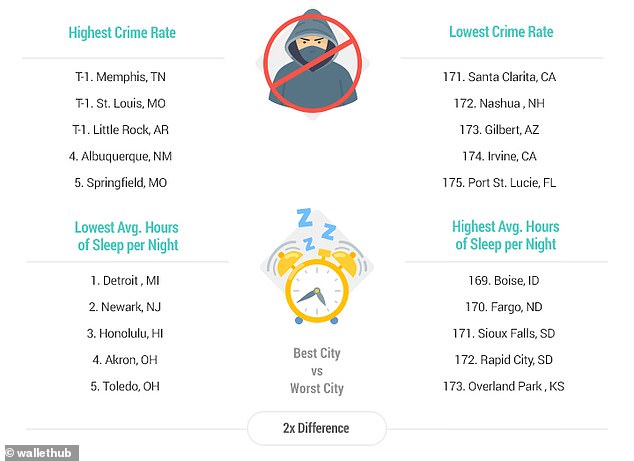 Memphis, Tennessee, was named the city with the highest crime rate and Port St Lucie, Florida had the lowest crime rate

This means that the chance of becoming the victim of either a violent or property crime in the Home of the Blues is one in 12.

It is well known that those who get less than the recommended eight hours of sleep each night have higher levels of stress.

This can the risk of – or worsen – diseases such as diabetes, high blood pressure, asthma and arthritis.