A food service employee at the Detroit Tigers’ baseball stadium has been arrested after he was allegedly caught on video spitting on a customer’s pizza.

The disturbing video that shows a man shooting a massive string of saliva at the pizza before mixing it in with the sauce went viral on social media over the weekend.

A suspect – who was initially identified but later had his name redacted – was said to be scheduled for an arraignment on unspecified charges Monday morning.

A disturbing video shows a food service employee spitting into a customer’s pizza at Comerica Park, home of the Detroit Tigers baseball team

The person who originally posted the video to Instagram, Quinelle May, claimed the worker was ‘mad and having a bad day’ when he spat on the pizza – but also said he had done it in the past.

In the video caption, May described how he reported the video to management but was shut down and set home.

‘Every time I tried to talk, they told me to shut up,’ he said.

May claimed he was threatened with prosecution if he didn’t take the video down.

Officials later confirmed the employee is no longer employed by Comerica Park following the incident on Friday.

‘As soon as we became aware through social media of potential food tampering Friday night, we immediately closed that food stand and disposed of all the product,’ ballpark representatives said in a statement.

‘Food safety is our top priority and we will take any appropriate action necessary to protect our guests.’

One Tigers fan, John Schiffeneder, had a particularly bleak reaction to the video, telling WXYZ: ‘The unfortunate part is, it’s not uncommon. People don’t realize how many different places do things like that. 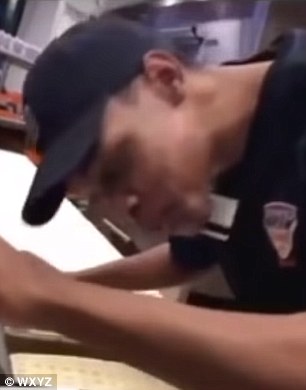 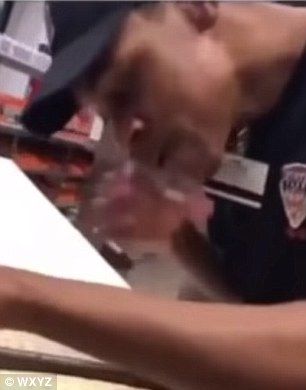 The person who originally posted the video claimed the worker was ‘mad and having a bad day’ when he decided to spit into the food, however they also said he had done it before