Deutsche Bank only cut ties with Jeffrey Epstein 2 MONTHS AGO

Deutsche Bank only cut ties with Jeffrey Epstein a few MONTHS AGO after an extensive relationship, lending him money and providing trading services, despite being warned he was a ‘reputational risk’ because he was such a lucrative client

Deutsche Bank continued to do business with Jeffrey Epstein after his 2008 conviction for soliciting prostitution and only severed ties with him a few months ago ahead of his latest arrest on child sex trafficking, it has been revealed.

The New York Times reports that until earlier this year, Epstein was being given loans by the bank and was considered a ‘lucrative’ client within its private-banking division.

It is unclear what prompted the bank to suddenly end their years-long relationship several months ago.

Epstein was arrested dramatically on the tarmac at Teterboro airport last Saturday while getting off his private jet.

Whether Deutsche Bank knew ahead of time that he was facing legal woes remains uncertain.

Sources who were familiar with his accounts told the Times that compliance officers once raised concerns that he was a reputational risk to them because of his past but managers overruled them.

How much money Epstein actually has has also come into question since his arrest.

Prosecutors described him as having ‘infinite means’ and he is routinely described as a billionaire.

His property portfolio alone accounts for staggering wealth – around $200million – and he is said to have more money in investment accounts from his company.

According to the Times, he was a math teacher until the 1970s when he went to work for the father of one of his students at Bear Sterns.

He built his wealth upwards from there, largely thanks to his connection to two men; Leslie H. Wexner and Steven J. Hoffenberg.

Epstein was publicly admonished after 2008 when details of his plead deal, arranged by now Secretary of Labor Alex Acosta, became public.

But privately, he was welcomed back into the trappings of privilege.

Despite admitting to soliciting prostitution (a lesser charge than what he had been accused of), Epstein was welcomed back into society by celebrity friends and acquaintances.

He flitted between Palm Beach, where his first crimes took place and where some of the new allegations are set, New Mexico, the Caribbean, Paris and New York, staying in his many homes and flying on one of two planes he owns. 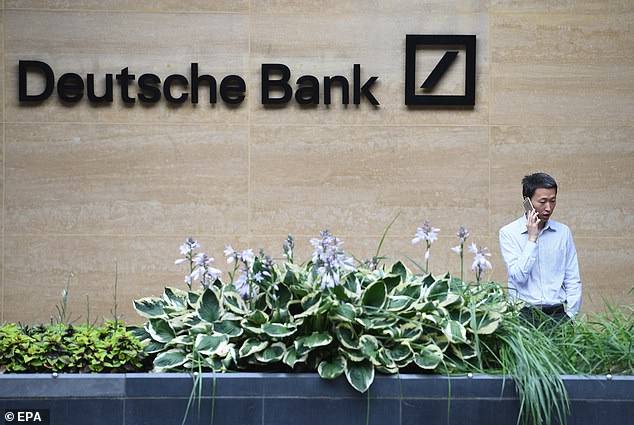 Deutsche Bank was told by compliance officials that he posed a ‘reputational’ risk but they decided to keep him on because he was so lucrative, it has been reported

Even during his time in custody in Florida, he was allowed to leave the detention center where he was being held to go to his office and work for 12 hours a day.

Epstein made his name as a financial wizard and advisor to the super rich and wealthy.

His infamous black book of contacts – which a former assistant tried to sell years ago – laid bare his extraordinary reach around the world.

He used it, it has been alleged, not only to serve prominent people in business but to also provide some of them with the underage girls he is charged with trafficking.

Now that he is facing 45 years behind bars on two charges of sex trafficking, talk has turned to how he was able to keep up those relationships and whether he will now try to drag down any of the famous associates he spent years gathering to try to save himself.

Since Epstein’s arrest, more women have come forward to allege that he preyed on them when they were underage.

He pleaded not guilty to the two charges of sex trafficking that he has been charged with earlier this week, and is due back in court on Monday for a bail hearing.

Prosecutors are asking that he be denied bail because they say he is a flight risk.