When a baby is stillborn or lost during pregnancy, in the flurry of activity that naturally centres around mother and child, another broken heart in the room can sometimes be overlooked.

Fathers play such an important supporting role during pregnancy and labour but while the loss may not be physically happening to them, they feel it all too keenly and often don’t voice their grief as easily.

‘As a dad you’re expected to continue that supporting role – this happened to mum, I need to take care of mum – rather than this happened to both of us,’ says Benn Lockyer, whose son James died during labour in 2017.

‘It’s so important for dads to speak out, reach out for help because we need it too.’

Benn and his wife Sarah were elated when she reached full term in her ‘perfectly healthy’ pregnancy and prepared to welcome their baby home. 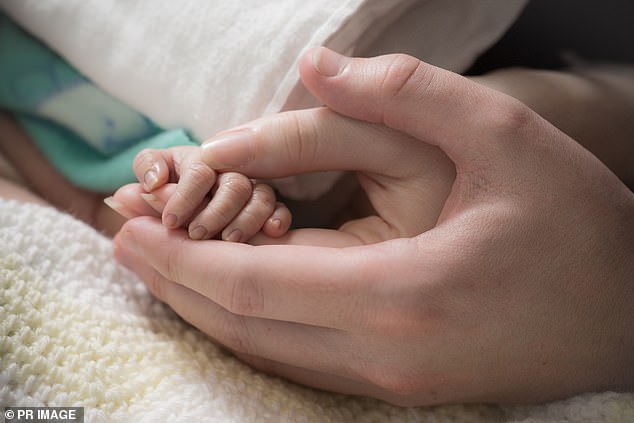 ‘We had heaps of friends and family buying gifts and knitting things and making things,’ he tells AAP from their home in Gisborne, Victoria (pictured is Benn holding James’ hand)

‘We had heaps of friends and family buying gifts and knitting things and making things,’ he tells AAP from their home in Gisborne, Victoria.

‘His room was all set up – we were really ready for him to come home. But that just never happened.’

Doctors suspected a blood clot formed on the umbilical cord during labour and cut off his oxygen supply, giving him an injury that would eventually cost him his life.

‘He was with us for three days,’ Benn says.

When the couple spoke to their friends about their loss, they had very different experiences.

‘Sarah would just sit down with a friend and they’d just openly talk about it for hours,’ Benn says.

‘Guys just don’t want to talk about things. If we just sat in a room together with a few beers (it was like) it never happened.

‘When those conversations did happen a few times they’ve been extremely helpful but they’re few and far between and I’ve had to push the topic really hard before the conversation really gets going. 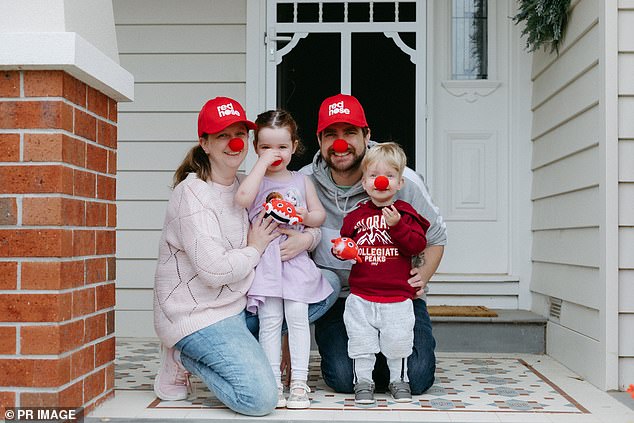 When the couple spoke to their friends about their loss, they had very different experiences

When friends did reach out, they often said things that – while well-intentioned – just seemed to make things worse.

‘Things like “he’s in a better place” or “at least you can try again” – and it’s like, we don’t want to just try again, we want James,’ Benn says.

Fellow bereaved dad Hugh Thorneycroft says he lost contact with his entire group of friends after the men – none of whom were fathers – kept saying the wrong thing.

A standard scan at the halfway point of his wife Danni’s pregnancy in late 2019 revealed their baby Hamish – who had been identified as having early onset severe growth restriction – no longer had a heartbeat.

‘Everyone was really upset but no one knew what to say – they either said nothing or the complete wrong thing,’ says Hugh, who comes from the small town of Metcalfe near Castlemaine in Victoria.

‘It’s been a trigger ever since – whenever someone starts a sentence with “at least” then you know it’s not going to be helpful at all.

‘Or they’ll start a sentence with “oh well, you know” and then go on and say something inappropriate or that shouldn’t have been said.’ 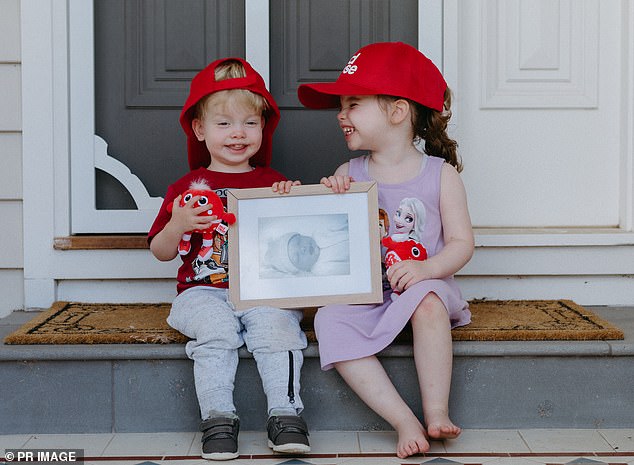 One such utterance was so bad, Hugh made his friend leave the house and hasn’t seen him since.

‘You find out who your real friends are – but unfortunately for myself it wasn’t any of them,’ he says.

Both dads say the best thing anyone can do is just acknowledge how awful the situation is without trying to fix anything.

‘You don’t want to lose friends over things like this but at the end of the day you need to be around people who are going to support you,’ Benn says.

Both men turned to Red Nose’s 24/7 counselling and support services to help them through their grief.

‘It just helps you live with it a little bit easier when you can openly talk about it,’ says Benn, who has also joined a number of Facebook groups for bereaved dads.

‘I’ve made some connections that have been really helpful.

‘Even a conversation with a stranger can have a huge impact on your day and how you’re feeling.’

Red Nose Day is on Friday August 12 and this year aims to raise $800,000 for more research towards a goal of zero babies dying unexpectedly in Australia and education and initiatives like Red Nose Fathers of Loss.