Devastated mother reveals she thought son, 9, had a cold – but he died two days later of leukaemia

The mother of a nine-year-old boy who died just 48 hours after a shock Leukaemia diagnosis has revealed how she thought he was suffering from a cold just two days before.

Danielle Harber, 36, thought Josh Harber had caught the same bug as his brother when he complained of a headache and was sick.

After he started experiencing pain in his ribs the mother took her son to William Harvey Hospital on July 5, believing Josh had hurt himself falling over days earlier – he was sent home and told to rest.

The next day Josh was diagnosed with an unusual and aggressive form of acute myeloid leukaemia (AML) and just 48 hours later on July 9 the ‘smiley’ youngster passed away.

Speaking about Josh’s shock diagnosis his mother Danielle told Kent Online: ‘A week before he was absolutely fine. He was playing football in a football match.

‘There was nothing that said he was that poorly at all. Then during that week he literally just had cold symptoms.

‘He had a bit of a temperature, he was sick once but his brother had a sick bug the week before, so I just put it down to that. There was nothing that said he was that poorly.’ 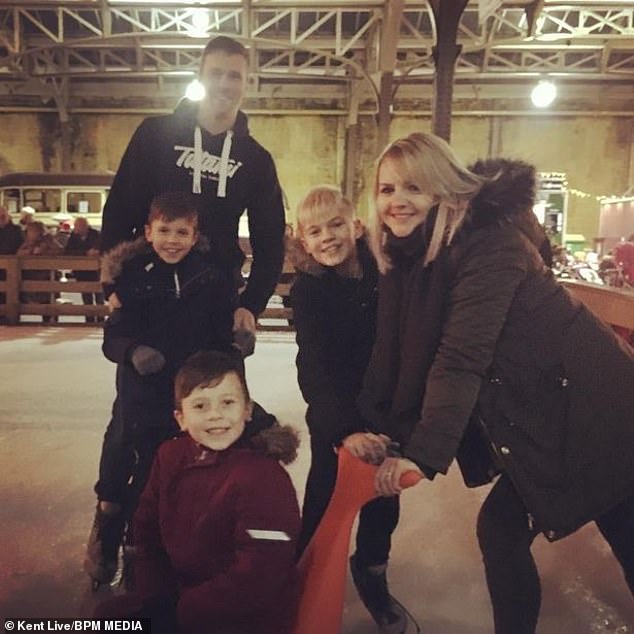 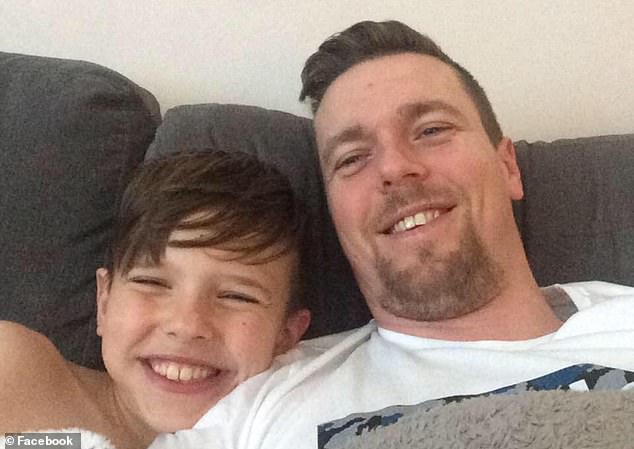 Josh (pictured above with his father Dean) died on July 9, four days after displaying cold symptoms

Writing on a fund raising group for childhood leukaemia his mother detailed the events that lead up to Josh’s untimely death. 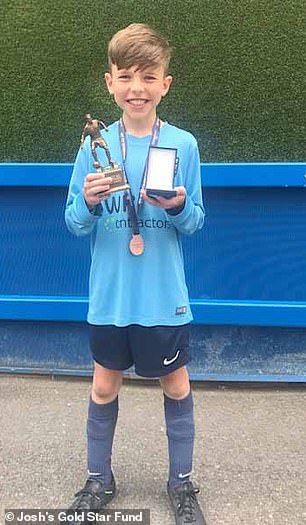 She wrote: ‘On the morning of Friday 5th July I was on the phone to the GP and as I was talking to the doctor, Josh’s fingernails and toenails went blue.

‘As I said this, the GP said ‘hang up and dial 999!’ so I did. The ambulance and paramedics arrived, they checked him over and they asked if he had fallen over recently.

‘I then remembered that Josh had fallen and hurt his ribs while at school on the 1st July. We were sent to the William Harvey Hospital for an x-ray which came back clear and we were told he had muscular skeletal damage and slight whiplash to his neck.

‘We were told that Josh would need a few days to recover and were sent home.

‘The next day Josh started being sick again. I knew something wasn’t right, he hadn’t eaten for a couple of days and was drinking but not going to the toilet, and suddenly he couldn’t stand on his right leg as it was too painful.

‘We took him back to A&E where they took his bloods and at 3am on the 7th July we got the devastating news that Josh had an acute form of leukaemia.’ 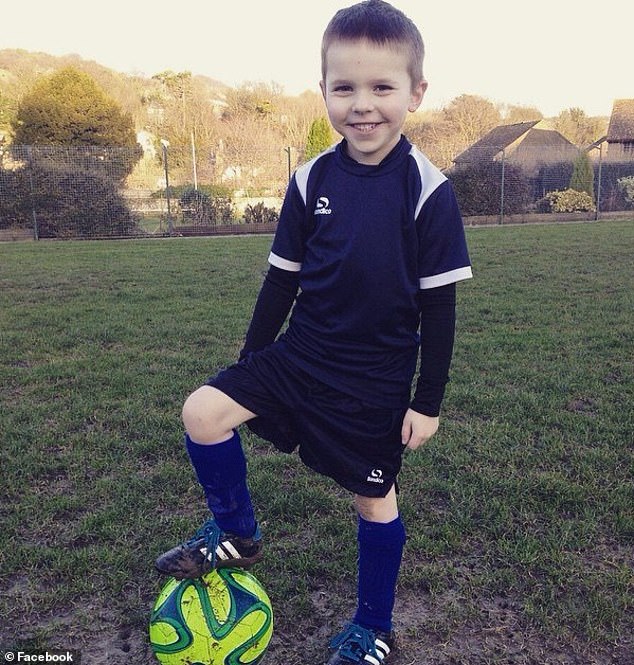 Little Josh who lived with his parents Danielle, 36, and Dean, 35, along with his two brothers Jack, eight, and Lewis Gaffney, 13.

The family say losing their middle brother changed the home dynamics ‘completely’ as the sporty youngster would often entertain his younger brother doing LEGO and Minecraft and then play football for hours with the eldest one, Lewis.

His mother told Kent Online: ‘Josh was the middle one, he was like the jam in the sandwich.’

He was rushed to A&E at William Harvey Hospital in Ashford, and later transferred to St George’s Hospital in London for treatment when the results of a blood test revealed just how ill he really was – he died just 48 hours later. 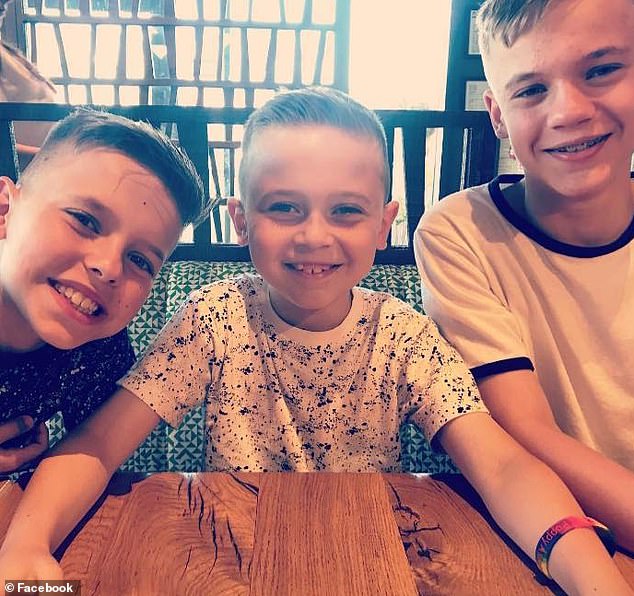 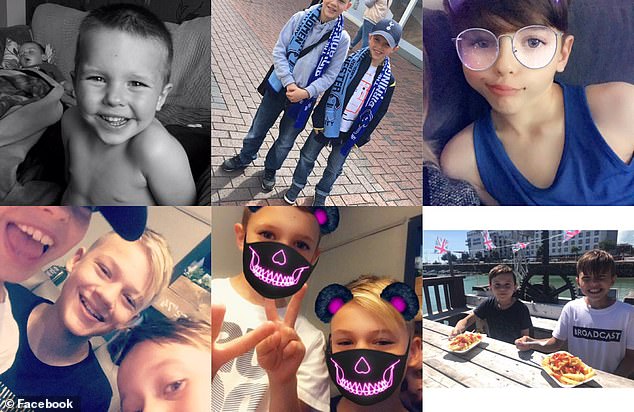 AML is an uncommon type of cancer, with only 3,100 people diagnosed each year in the UK.

And the form of AML Josh had was particularly rare and very aggressive, his family said.

The disease usually affects people older than 75 and in most cases, there’s no identifiable cause.

Danielle’s close friend Shannon Humphrey, 24, said the family now want to raise as much awareness for childhood leukaemia as possible.

She said Josh, who played for Dover Rangers under-nines team, was ‘the loveliest boy who looked out for everyone’.

Shannon said: ‘He lived and breathed football and just recently got managers player of the year from his coach Andy.

‘This was the happiest moment of his life and his face in the picture tells it all. He loved watching YouTube videos mainly of Daniel Cutting the football freestyler.

‘He also loved Nerf wars with his brothers and dad. He had so many friends and everyone talked about Josh’s smile, and how it would literally light up a room.’

Sharing the picture of Josh in his football kit on social media, his father Dean thanked members of Grassroots Football UK for their support and paid tribute to his son.

Dean said: ‘Thank you all for your wonderful words, love, support and kind donations.

‘We wanted to share this photo of Josh at his happiest when he was awarded managers player of the year last season.

‘Josh was well known for his love of football and his amazing smile, which is how he got his nickname Smiler.

‘We all love and miss him so much, but he will forever be with us.’

Grassroots Football UK also paid tribute to Josh and said he had been ‘taken away at such a young age’.

A spokesperson added: ‘He always played with a smile on his face.’

Danielle said the family is now hoping to raise funds for research into childhood leukaemia with Josh’s Gold Star Fund, a Fund at Children’s Cancer and Leukaemia Group.