With tears streaming down her face, surrounded by her devastated family, Samantha Rowlands did something no parent should ever have to do.

After a tragic accident earlier this month, where her one-year-old son Jone Dagese Radaniva was found dead inside a hot car in her driveway, on Saturday Ms Rowlands, her partner, and her five other children farewelled the ‘cheeky little boy’ who had brought laughter to their full household.

Jone had been in the car with Ms Rowlands, his twin Esala and his grandmother on February 3. Ms Rowlands said it was a simple miscommunication that meant he was left behind in the 35-degree heat, and only found outside their home in Chester Hill, in Sydney’s west, two hours later.

‘My daughter told me she thought Jone was in bed with my mum, and my mum thought he was out the back playing, until my daughter came inside looking for him and they realised he was missing,’ an emotional Ms Rowlands explained to Daily Mail Australia last week.

Jone was beloved by his siblings, and by his devoted mother and grandmother. In an emotional service at Rookwood Crematorium on Saturday morning, dozens of mourners heard how Jone was always first to the door when guests arrived, and how Esala, the twin he left behind, was his partner in crime.

His eight-year-old sister Sapphire, who made the heartbreaking discovery earlier this month, treated him as though he were her own child, and his grandmother would remark that the toddler’s fascination with powerpoints could lead to a successful future as an electrician.

Celebrant Carolyn Wilson was keen to remind mourners that Jone’s death was nothing but a tragic accident, with Ms Rowlands, who had been at a rugby game when the tragedy unfolded, also keen to ensure nobody felt blame for the heartbreaking death of her son.

‘The most important thing you must remember is that no-one is to blame,’ Ms Wilson told the congregation.

‘Although we can not change what has unfolded, you must be grateful for the gift of knowing and loving Jone.’ 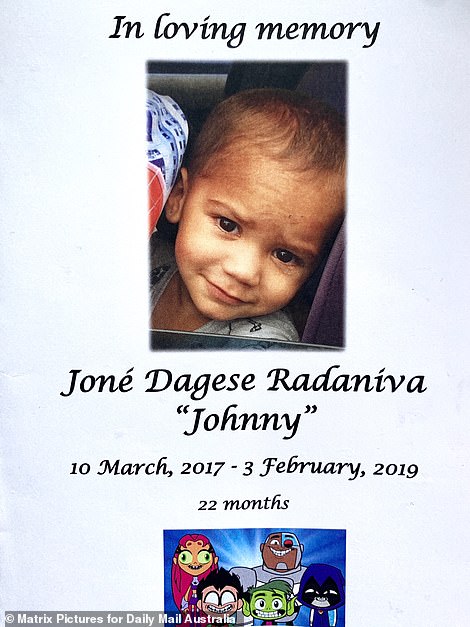 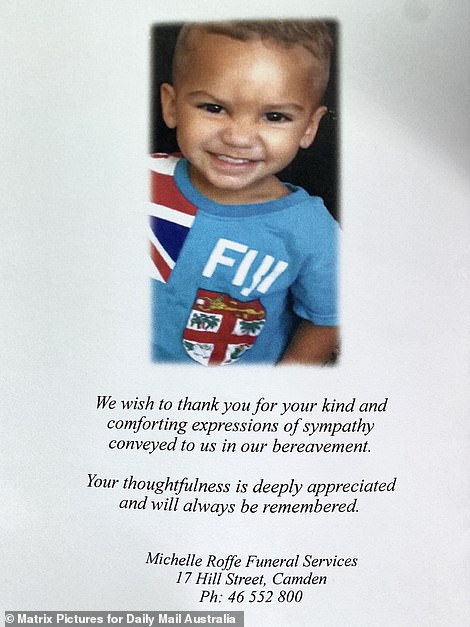 Jone Dagese Radaniva, 22 months, died inside a hot car outside his family home in Chester Hill, western Sydney, on February 3 after a simple but tragic miscommunication 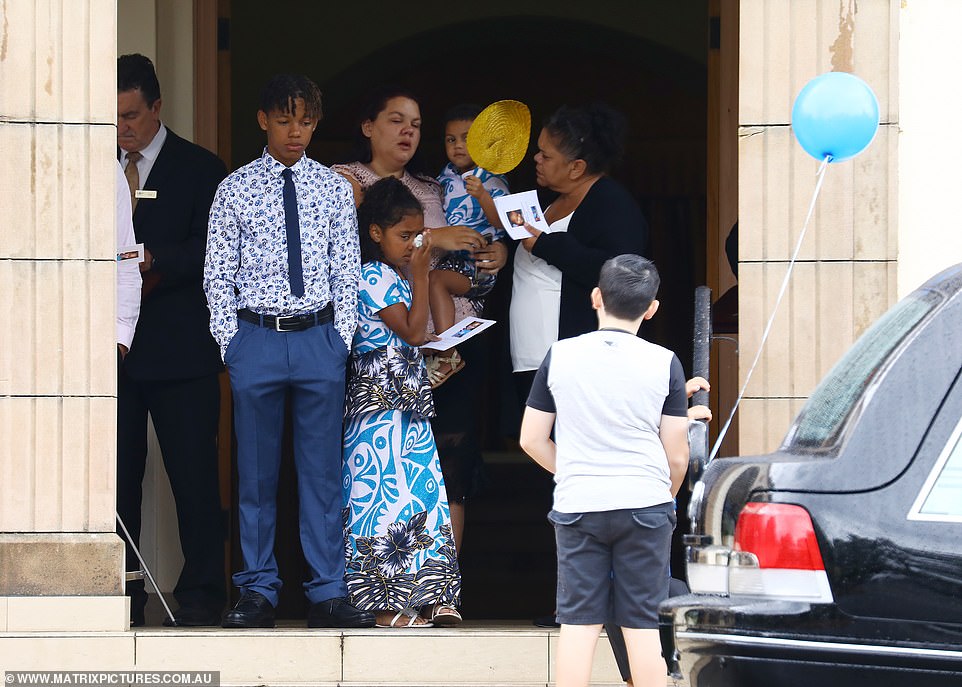 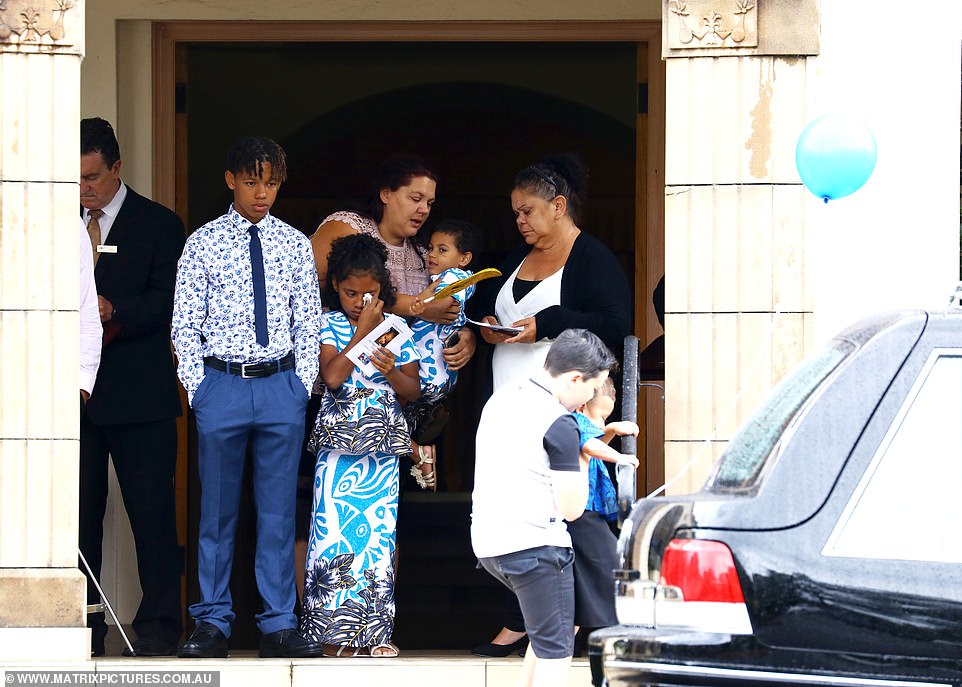 Ms Rowlands, who has five other children, was visibly distraught through the service, but was seen comforting her children through their own grief 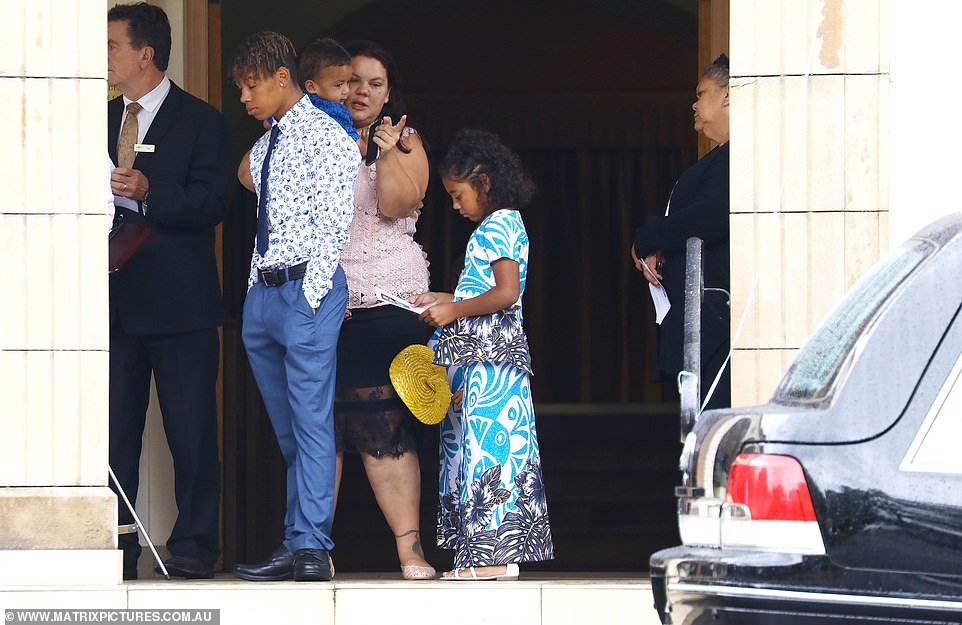 In one heartbreaking moment, she was seen holding Jone’s twin, Esala, and pointing to the toddler’s coffin as it laid on blue tulle, surrounded by teddy bears, inside the hearse 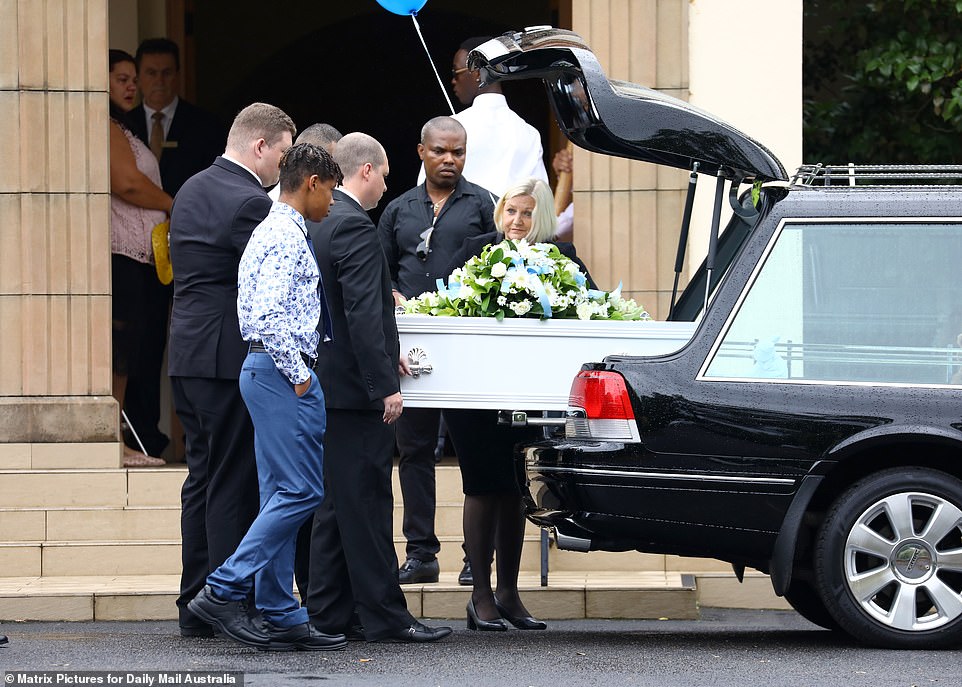 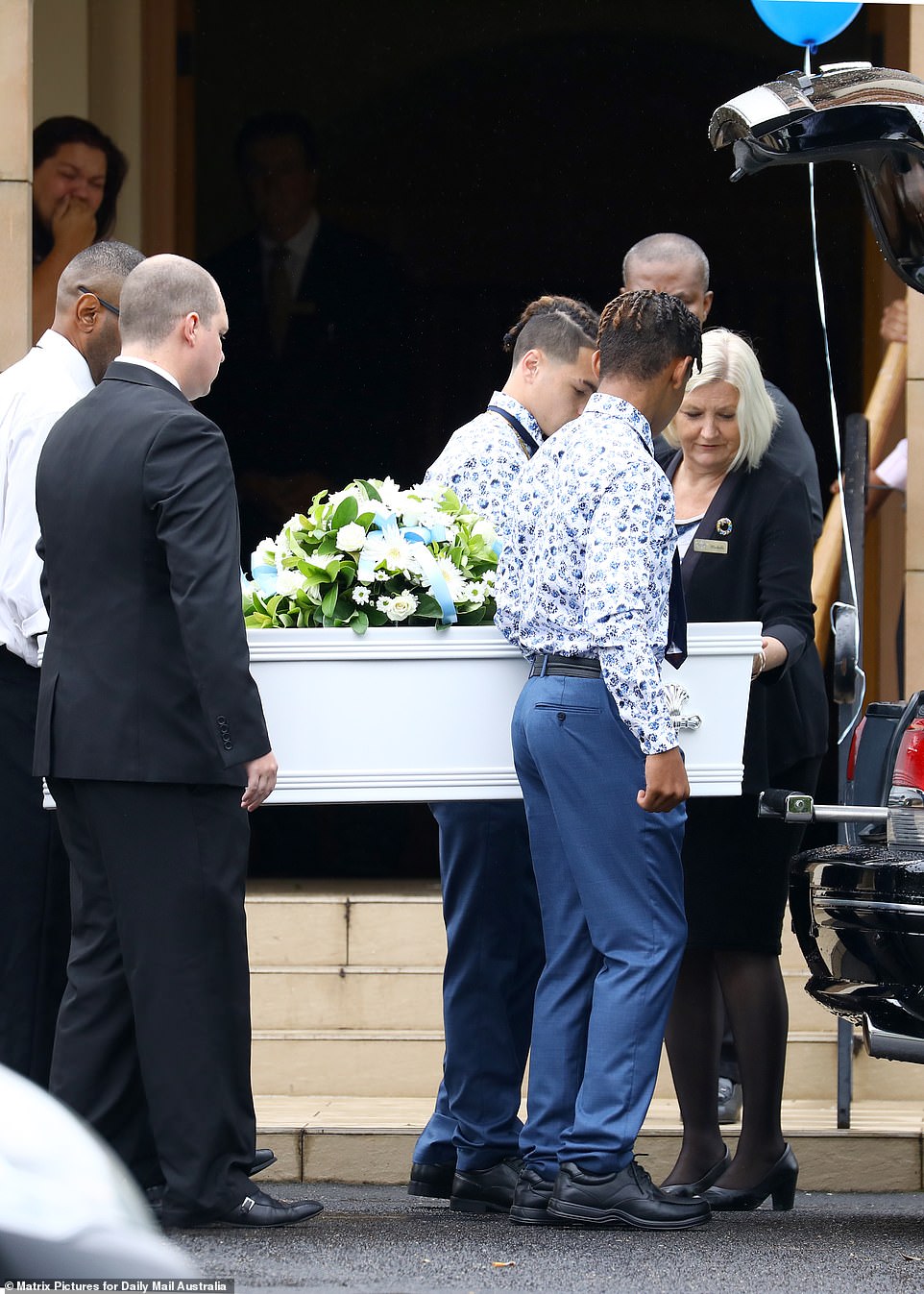 Ms Rowlands walked inside with her son for the final time, before taking her seat in the front row for the moving service

Ms Rowlands sat in the front row of the chapel after heading inside with her son’s pallbearers as a didgeridoo played out the front.

She was comforted by family members earlier in the day, and at one point was seen holding Esala, while pointing to his twin’s coffin, as though she was explaining what was happening.

At all times, the devastated mother was flanked by family members, as each took turns holding Esala.

Family members made their own tributes, using poems to express their despair and heartbreak.

Grandmother Valerie, who had been inside the house when little Jone died, said she would ‘never be complete again’, in a moving poem read out by Ms Wilson.

‘To no longer see your face, breaks me every day,’ the poem began.

‘I’ll never be complete again, I never will be free, from this grief deep inside of me. I wear a mask of coping, but am in complete despair. I cannot mend what’s broken, my heart’s beyond repair.

‘I’ll smile if I have to, but that is just a mask, and I’ll say that I’m okay, if you kindly ask. But I cannot be happy, it is something that I lack, never will I be whole again, because I cannot get you back.’ 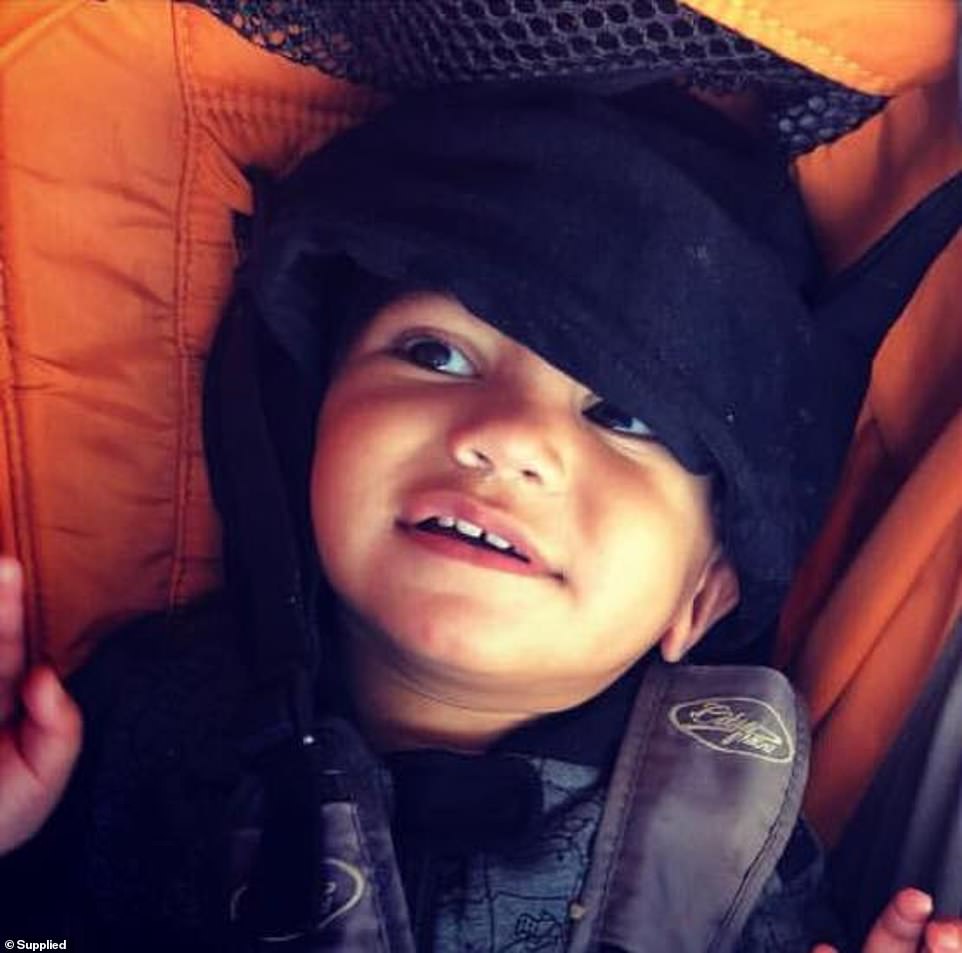 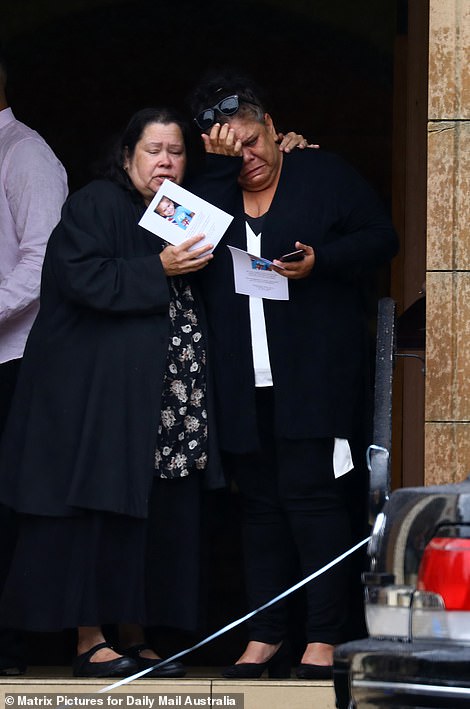 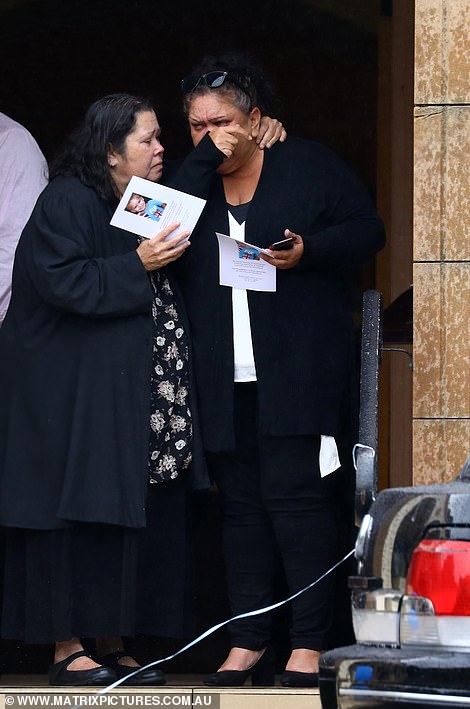 Grandmother Valerie (pictured right) was also visibly distraught ahead of the service, and a moving poem explaining her deep heartache was read out by celebrant Carolyn Wilson

Like Valerie, Ms Rowlands was too emotional to address the crowd, with her devastated cries filling the chapel throughout the service. She chose a moving verse to be read on her behalf by Ms Wilson.

‘I don’t need a special day to bring you to mind, the days I do not think of you are very hard to find,’ the poem read.

‘Each morning when I awake, I know that you are gone. No one knows the heartache as I try to carry on.

‘My heart still aches with sadness, and secret tears still flow. What it meant to lose you no-one will ever know.

‘My thoughts are always with you, in a place no one can fill. In life I loved you dearly, in death I love you still.’

Jone’s eldest brother, Bryan, had been unable to deliver his own tribute during his allotted time in the service, relying on a friend to read it out for him as he stood alongside him.

But as mourners were invited to pay a quiet tribute or say a prayer themselves, the teenage boy summoned up the courage to talk about his brother.

Urging mourners to take their grief and turn it into something more loving and powerful, he said Jone’s death was a lesson in the importance of showing, not just feeling, love.

‘The best thing he did was show us love, and that’s why he came here,’ he said. ‘He showed us what it was like to lose someone that was very important, and showed us we should all stay together and love each other.

‘I know that I can’t bring him back so the best I can do is make him proud.’ 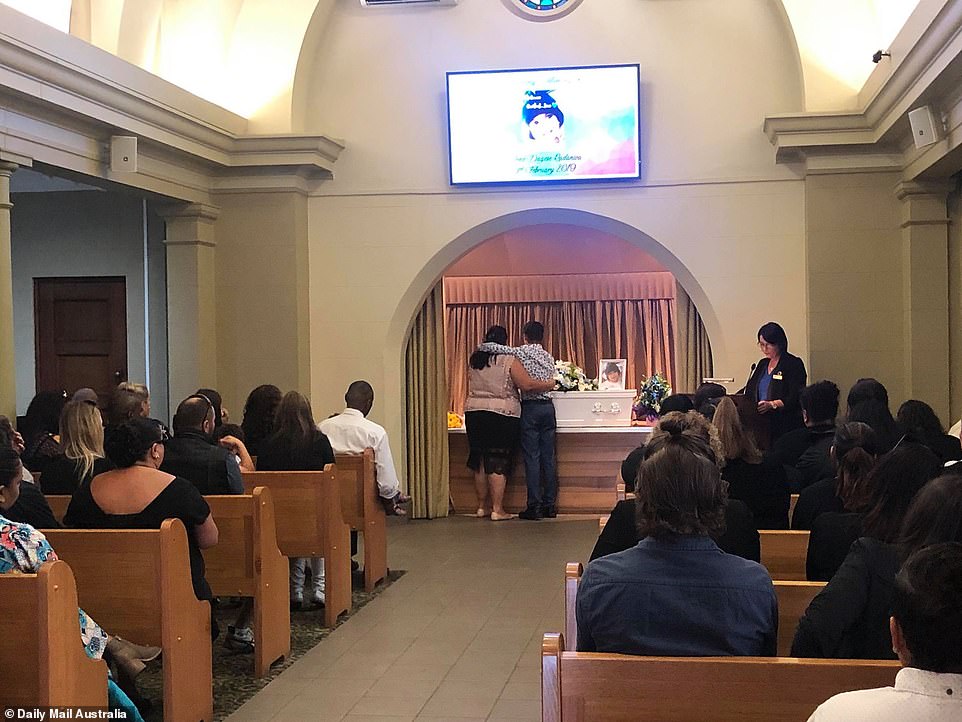 Ms Rowland’s distraught sobs filled the chapel, as she said a quiet goodbye to her young son, supported by her eldest child Bryan 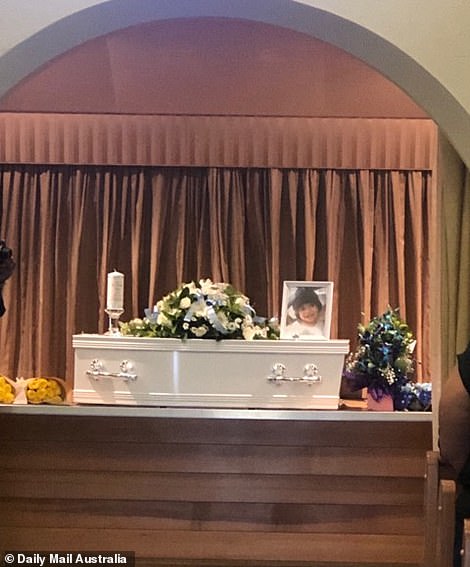 Jone’s white coffin was topped with a casket spray of white flowers, and mourners left colourful bouquets to the side

Following the service, guests left to the tune of Jone’s favourite song; Cool Clear Water, which plays at the beginning of his favourite movie, The Ballad of Buster Scruggs.

One man buckled over in grief, while others wiped tears from their eyes as they headed to the front of the chapel to release balloons and doves.

Two white doves were taken from a white cage with a teddy bear sat on top, and Jone’s siblings were seen petting the birds before the crowd said ‘goodbye Johnny’ and they were released.

Soon after, blue helium balloons were handed out to mourners, and flew into the air, contrasting brightly against the otherwise grey sky.

After Jone’s body was found, Ms Rowland’s family fell into a state of disrepair, even though police ruled his death a tragic accident.

Ms Rowlands said Jone’s twin Esala was ‘lost’ without his brother, as were his older siblings.

‘He and his twin brother Esala were inseparable,’ she told Daily Mail Australia. ‘I don’t ever remember a day they weren’t together. Jone would always be climbing on the table, dancing with his brother and other siblings.’

Since his death, Ms Rowlands said his twin hasn’t stopped asking where he is, and his eight-year-old sister, who loved him as if he were her own, has been left devastated.

‘Jone was always with her,’ Ms Rowlands said. ‘She was so attached to him – every chance she had she was with him. Everyone would always call her little mum because she would always try to play mummy to him.’ 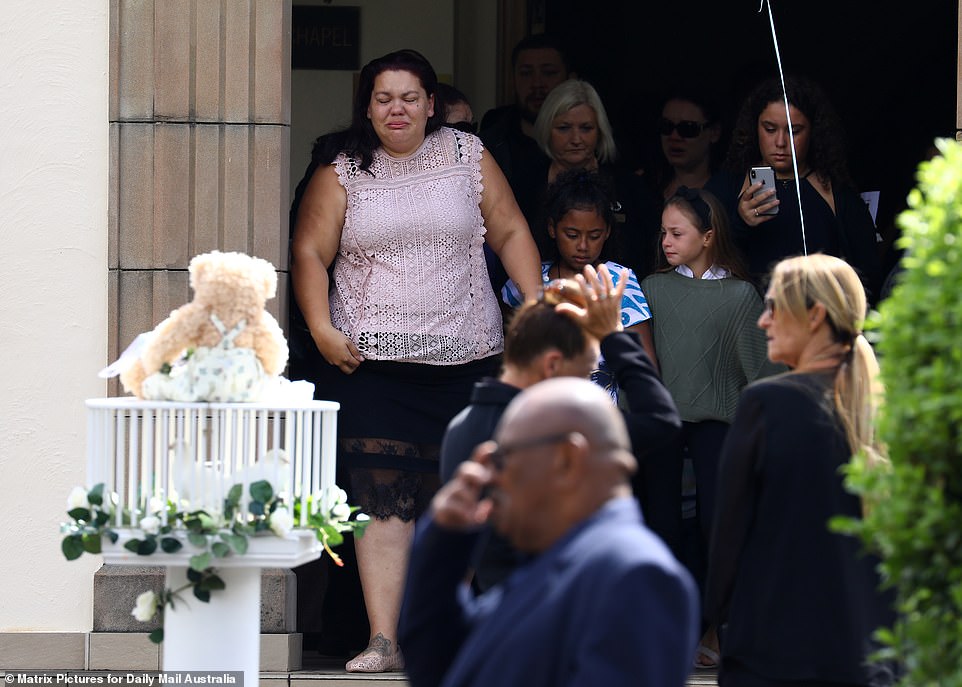 Ms Rowlands and her family were the last to leave the chapel, the raw grief evident on their faces 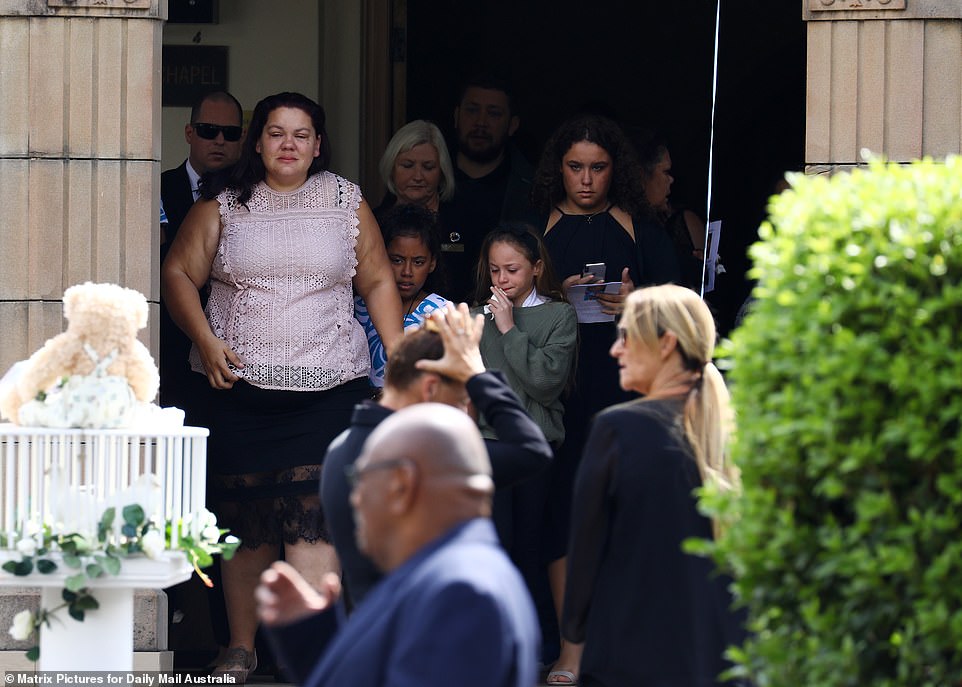 The Sydney mother earlier told Daily Mail Australia her son’s death was the most tragic accident, and she said she did not blame anyone for the death. When the tragedy unfolded, Ms Rowlands was at a rugby game, and her children were at the house with family 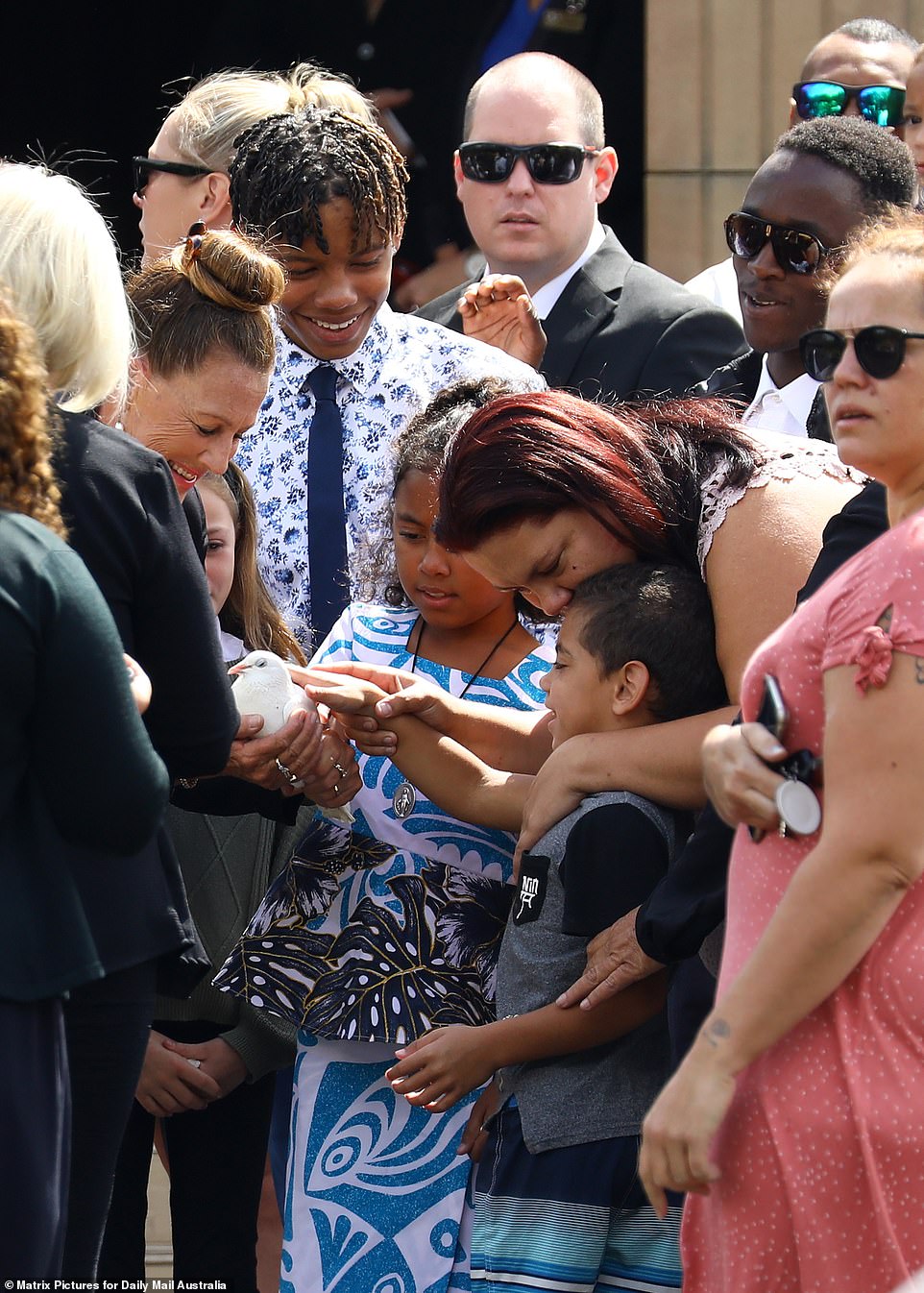 Two doves were released in Jone’s memory, with handlers allowing children at the service to pat the birds before they flew away 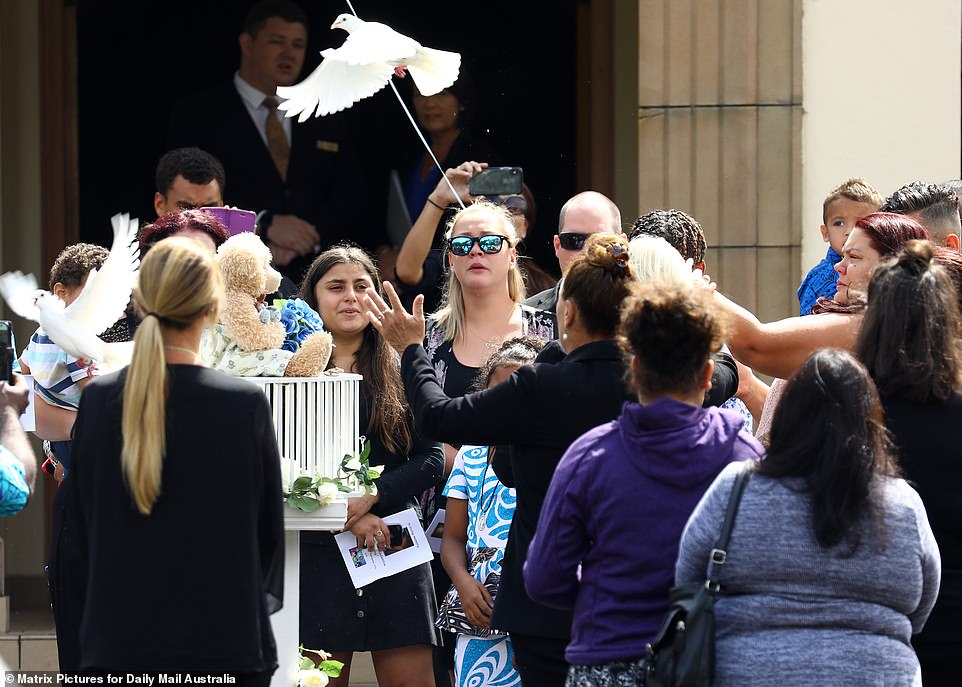 The large group of mourners were all clearly touched by the heartfelt service, with not a dry eye seen in the room

Ms Rowlands said she had been overwhelmed with grief in the last few weeks, and that the family were planning to move out of the home once Jone had been given a proper farewell, as they could not bear the daily reminder of the most painful moment of their lives.

A GoFundMe has been set up for the Sydney family, to help cover the unforeseen expenses such a sudden death can bring, and to help with moving costs.

Ms Rowlands said the tragic accident had torn her family apart, but there was no way she could lay blame on anyone for what had happened.

‘What I would like to say to everyone, is to cherish your children because tomorrow isn’t guaranteed,’ she said.

‘My heart is shattered into a million pieces and nothing anyone says or does will take away the pain and heartache I feel after losing my baby boy.

‘What happened was a very tragic accident. I don’t blame anyone – what happened could happen to anyone.’ 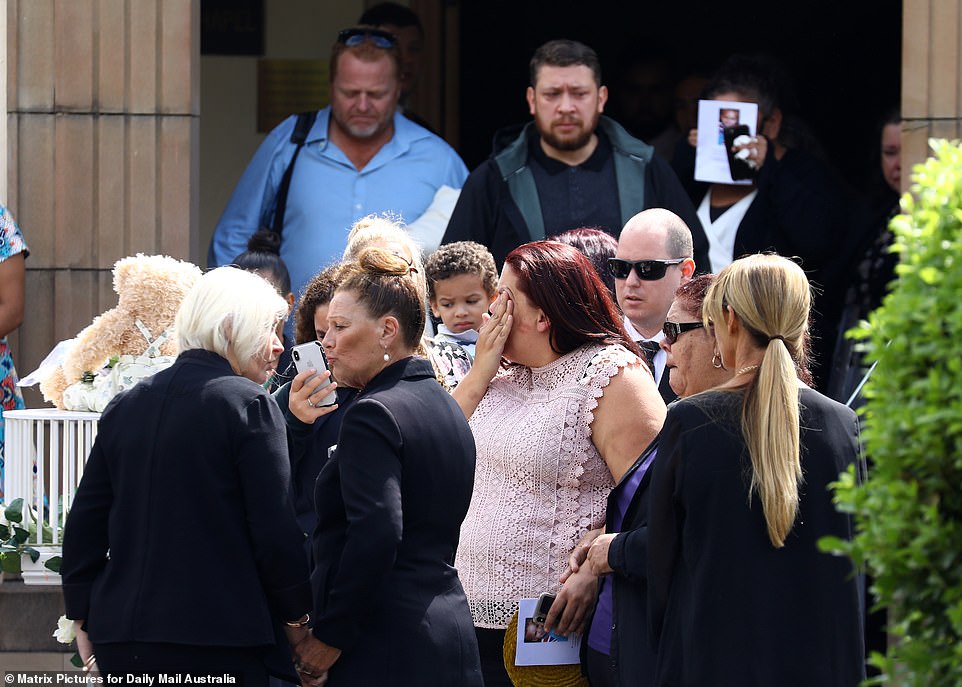 As the doves were released, mourners said their final goodbye to Jone, affectionately known as ‘Johnny’ 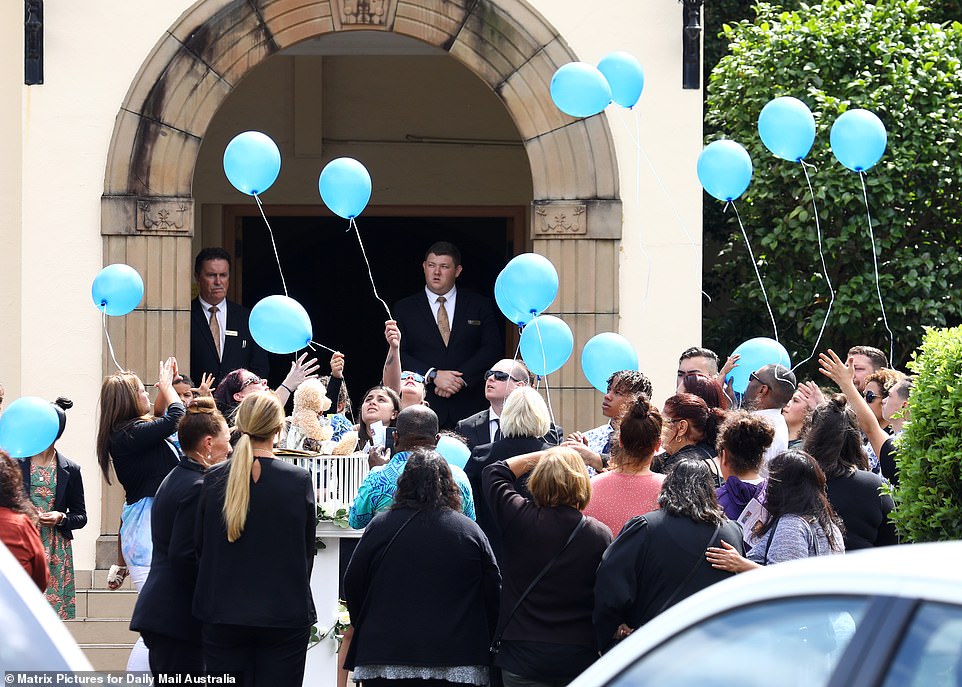 Balloons were released at the conclusion of the service, the touching moment leaving even funeral directors looking forlorn