Devastated Neymar watches on as his World Cup dream slips away!

Devastated Neymar watches on as his World Cup dream slips away! Footage shows the Brazilian star’s penalty heartbreak unfold in defeat by Croatia before he’s left in tears on the pitch

Footage has emerged of an agonised Neymar watching on as his and Brazil’s World Cup dreams flittered away at the hands of the enduring Croatians.

Brazil made four quarter-final exits in their last five World Cups as they were eliminated in the most dramatic of circumstances by Croatia – despite taking the lead in extra-time through Neymar.

Bruno Petkovic grabbed Croatia what seemed the most unlikely of equalisers to punish Brazil’s inability to put the game away after taking the lead. When they levelled with just minutes left, there appeared an inevitability over the penalty shootout that followed.

Croatia emerged through their last-16 tie on penalties against Japan and on their march to the final in 2018 won both their first knockout tie and their quarter-final on penalties.

Stepping up first for Brazil was Rodrygo – after on-loan West Ham man Nikola Vlasic gave Croatia the perfect start. Neymar watched with his head arched, through the top of his eyes.

The Real Madrid player’s penalty was poor and Neymar grimaced as Dominik Livakovic got down to it to his left. In a further sign of his nerves, Neymar then spat on the ground. 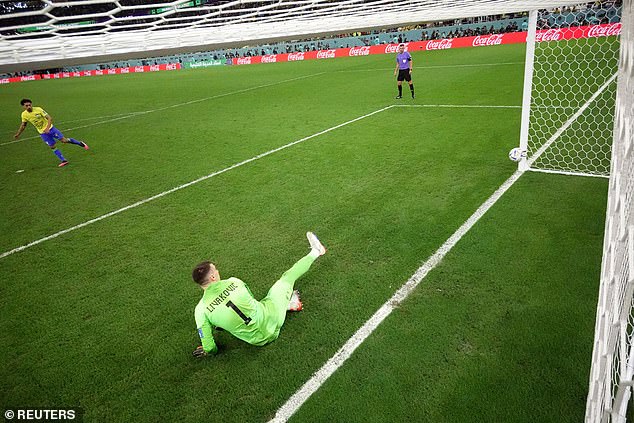 Successful penalties then followed from Casemiro and Pedro, though the nerveless Croatians – through Lovro Majer and the ageless Luka Modric – did not budge.

Brazil remained in touch, with Neymar marked down as their fifth and final taker – though he did not get the opportunity at glory that he went to bed last night dreaming of.

Mislav Orsic’s arrowed penalty into the left hand corner meant Marquinhos had to score. By this point, Neymar was on his knees with Pedro and Rodrygo on their haunches next to him.

As his PSG team-mate’s penalty came cannoning back off the left-hand upright, Neymar collapsed to the floor with his chance at claiming Brazil’s first World Cup since 2002 extinguished. Questions are now abound about his legacy.

Presumably knowing the cameras would be on him, Neymar appeared to hold it together for a period of time but there often comes a moment when the dam can no longer stop the flood and he was pictured – and filmed – balling his eyes out while Dani Alves, reportedly selected by Tite initially to keep the team’s mercurial superstar on a tight leash, consoled him. 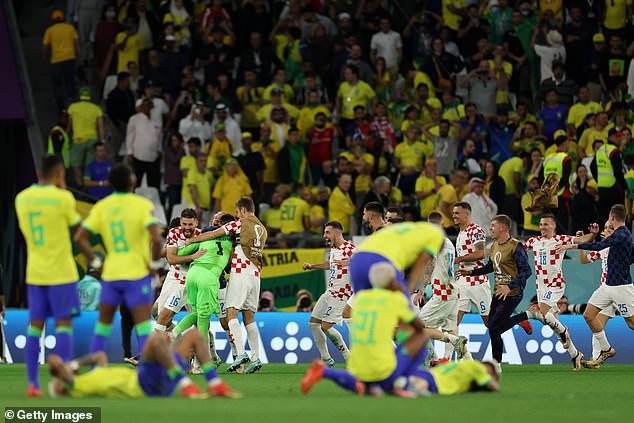 Having scored an incredible solo effort, Neymar’s celebration was wild and felt as if it was a coming of age moment for a player who divides opinion like few else.

Brazil were forced to take the hard route to the semi-finals by the persistence of Croatia. As they stepped up for the penalty shootout to begin, he was filmed with his eyes shut muttering a prayer. Neither his, nor Brazil’s, prayers will be answered for at least four more years.

After the game, Micah Richards, doing punditry work for the BBC, said he felt sorry for Neymar.

‘It is heartbreak. I thought he [Marquinhos] was a shoo-in to score with his experience, the player he is,’ he said. ‘It wasn’t meant to be. I feel so sorry for Neymar. He wasn’t at his best today, he got his goal, but it wasn’t enough.’