Devastating before and after pictures show Harvey’s impact

As Hurricane Harvey ravaged Houston on Monday, the extent of the devastation it has caused started to become clear.

Huge swathes of the city now sit underwater as flood water continues to rush through its streets. Thousands are without homes, even more have lost power and five people are feared dead across the entire state as a result of the storm.

There is no respite on the horizon, with another 50 inches of rain scheduled to land over the course of the week.

Emergency services have been pushed to the limit. 911 operators are having to choose between life-fearing callers and panicked residents are clambering to their roofs to wave towels in the hope that someone will rescue them.

Here, in a collection of photographs taken around the city before and after the storm hit, the scope of the damage is laid bare.

More than 2,000 people have been rescued from the flood water and at any given time, there is a 15 person backlog for 911 calls. 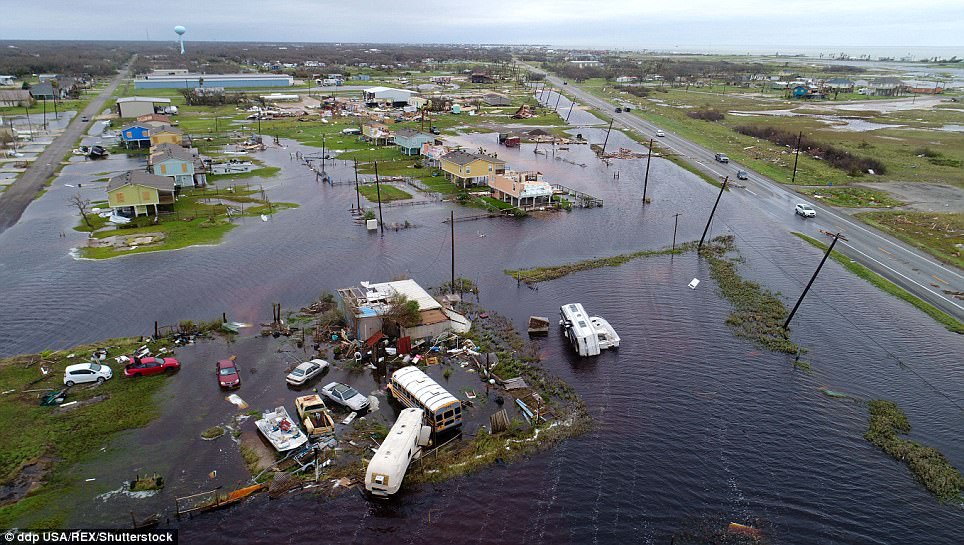 Aerial footage shows the floods in Rockport, Texas, after Hurricane Harvey on Sunday (right) and before (left) 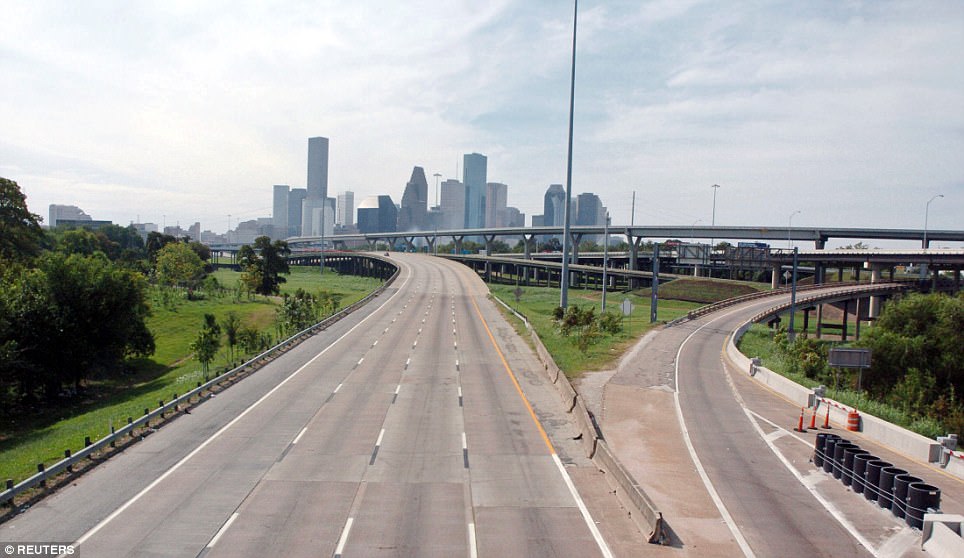 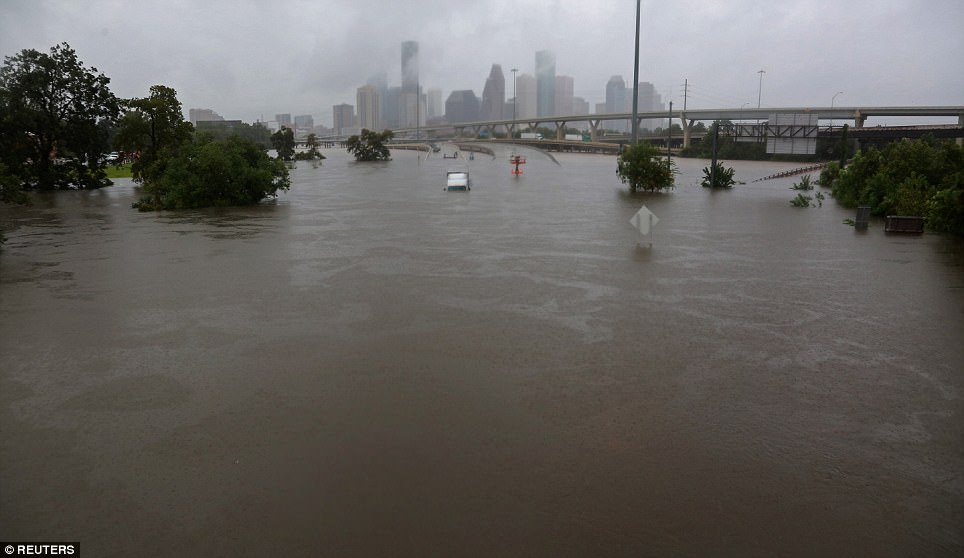 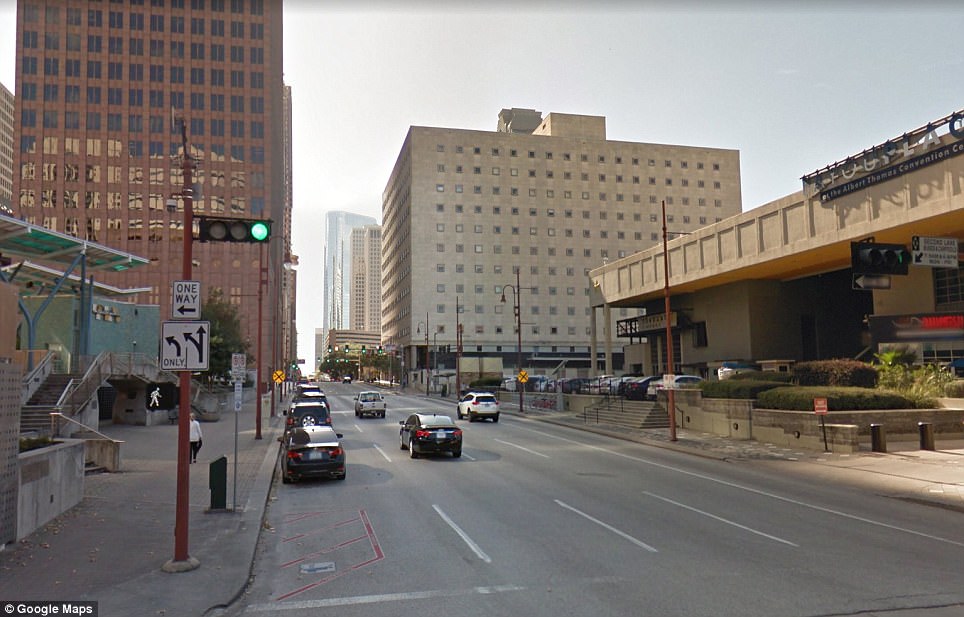 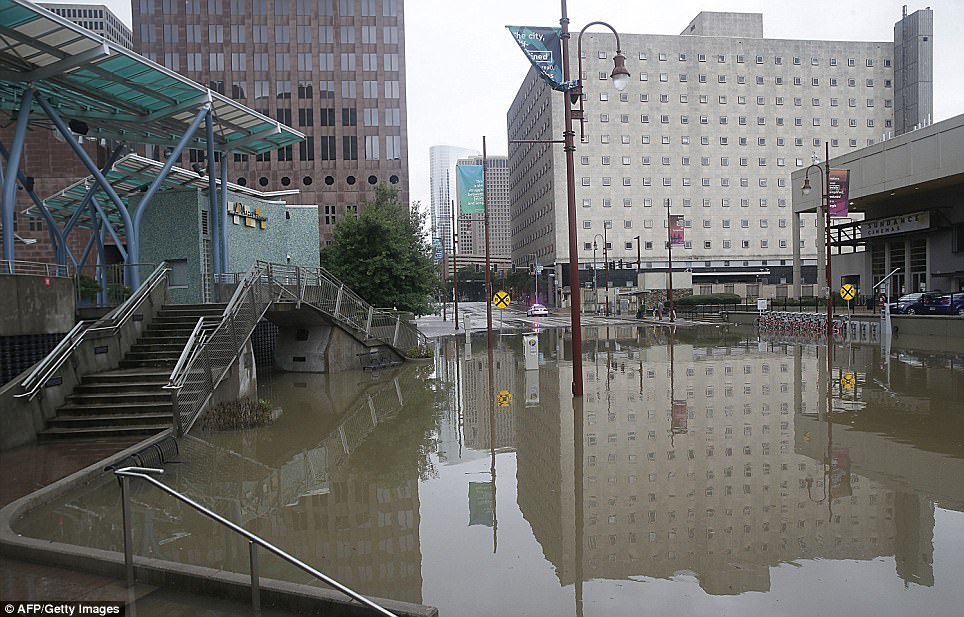 The theater district is shown above in ordinary conditions (left) and on Sunday (right). The total damage of Hurricane Harvey has been estimated as $40billion 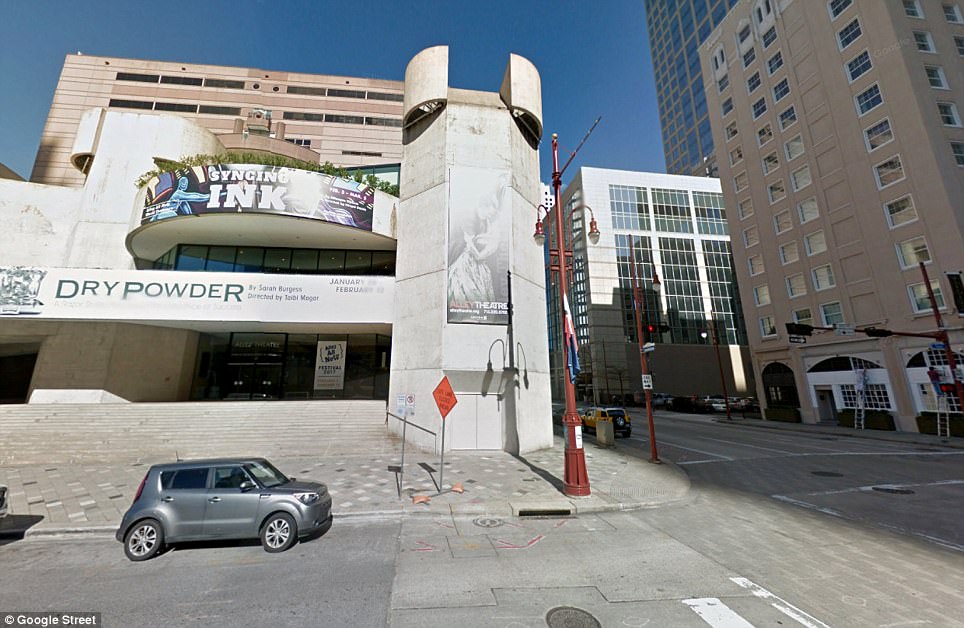 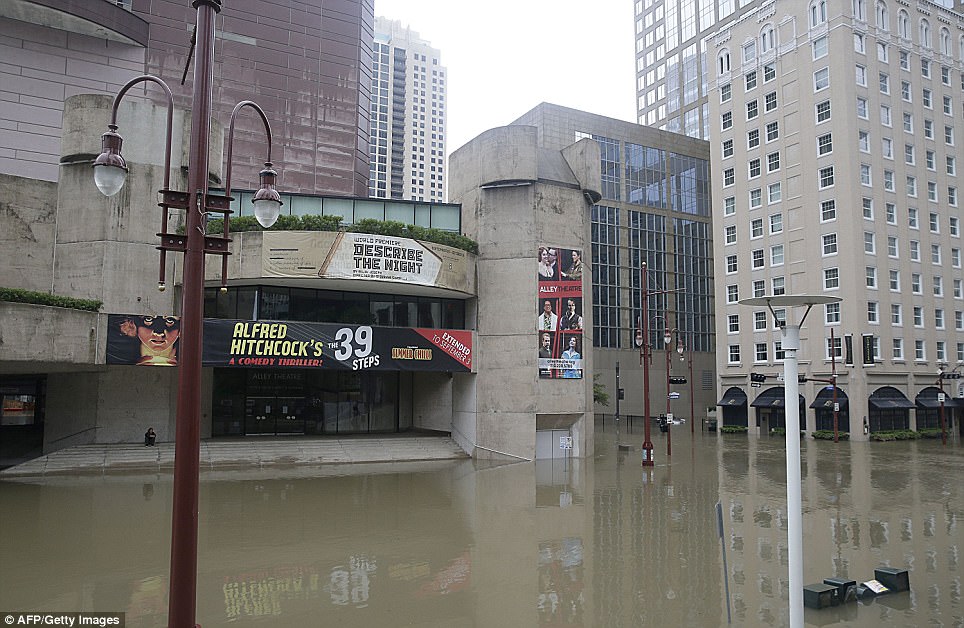 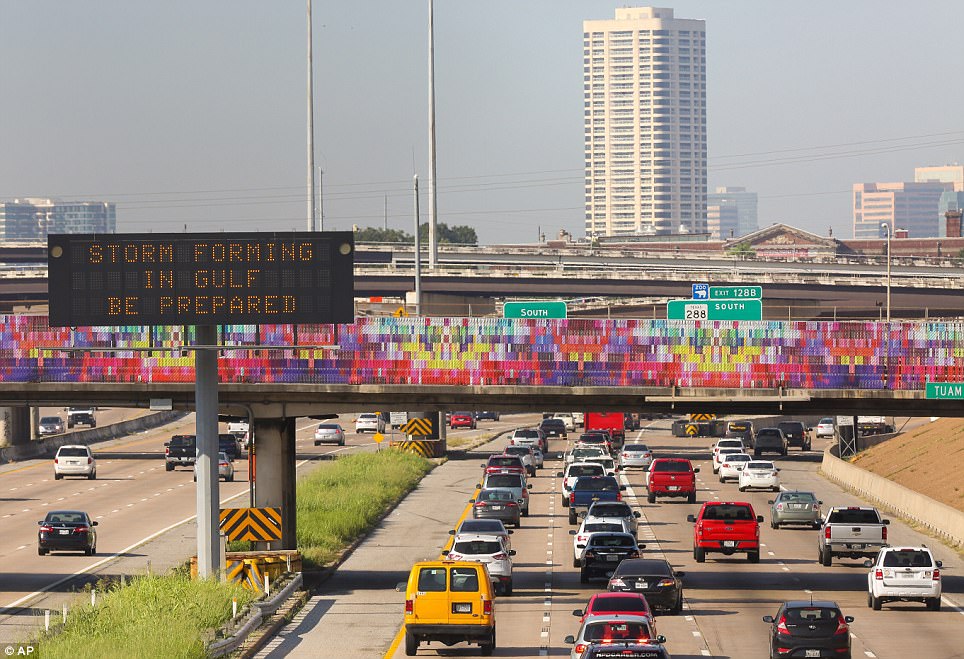 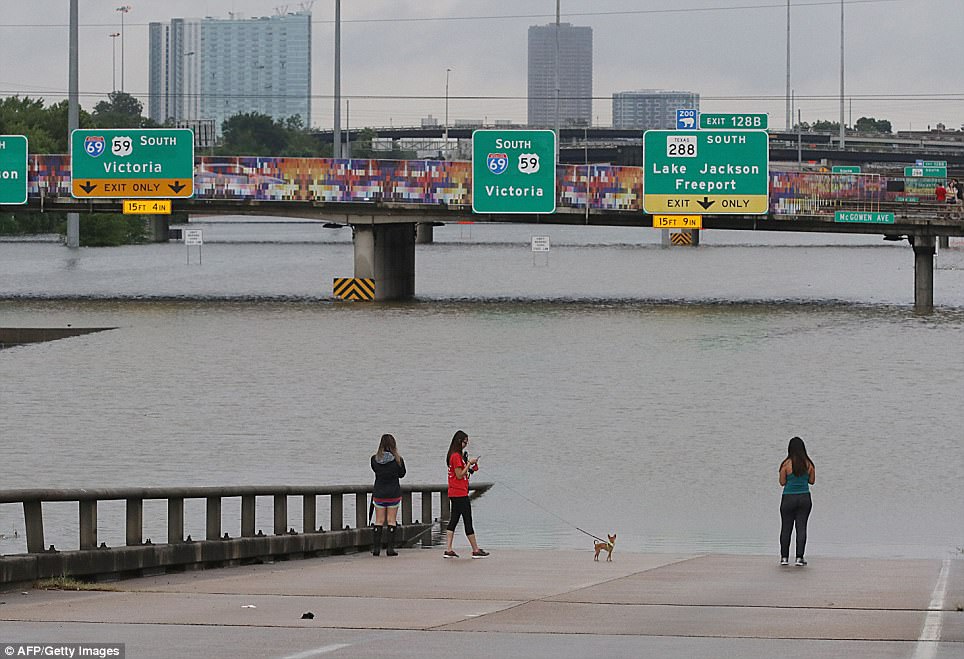 The colorful bridges above highway 59 towered over a bleak scene on Sunday (right), with large portions of the road under water

At a press conference mid-morning, Mayor Sylvester Turner pleaded for help from other cities and plugged charity relief funds to care for the thousands of Houston residents in crisis.

Two major dams which sit to the east of the city are being gradually drained by the army to stop them from overflowing.

The Addicks and Barker Reservoirs are both dangerously close to their capacities. With more rain on the way, US Army experts are racing the storm to release water from each dam.

The controlled release will send more water cascading in to the area of Buffalo Bayou, where freeways are entirely underwater.

It will stop an uncontrollable wave of water from rushing through homes.

The total cost of the damage has been put at $40 billion and FEMA, the Federal Emergency Management Agency, has warned it will be take years for the city and coastal towns to recover.

There has been criticism of Mayor Turner’s decision not to evacuate the city. 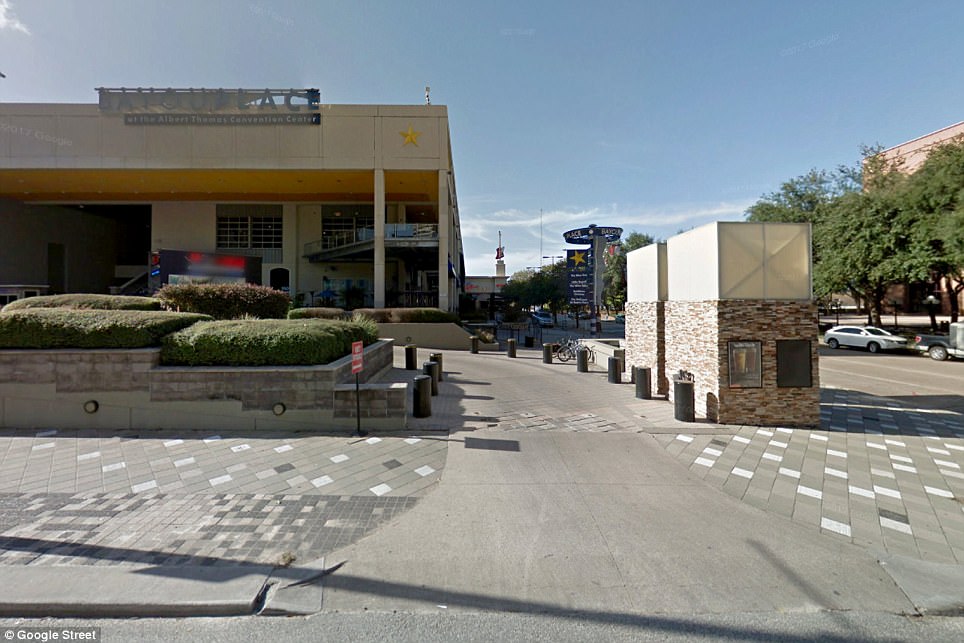 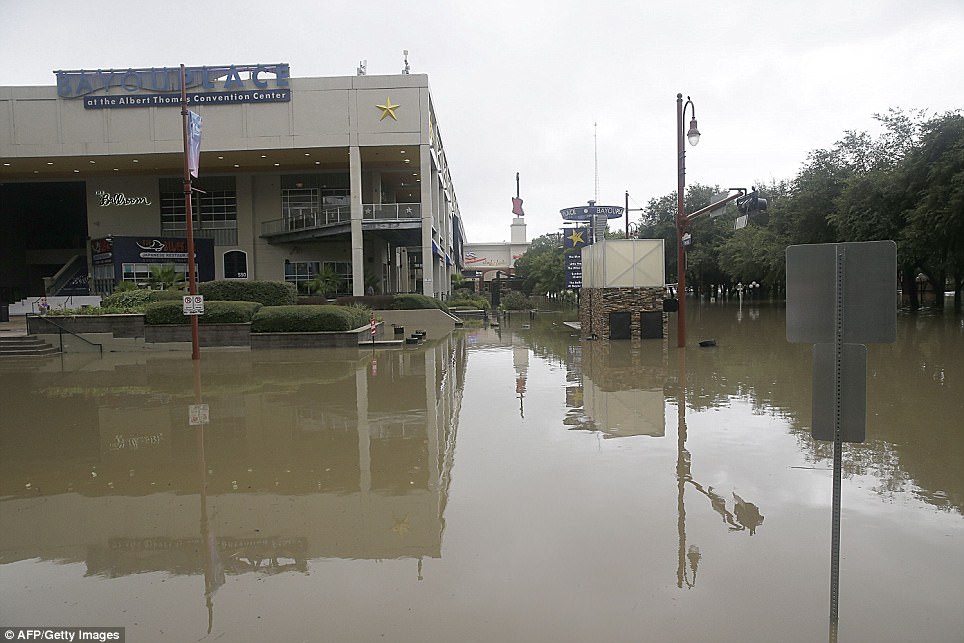 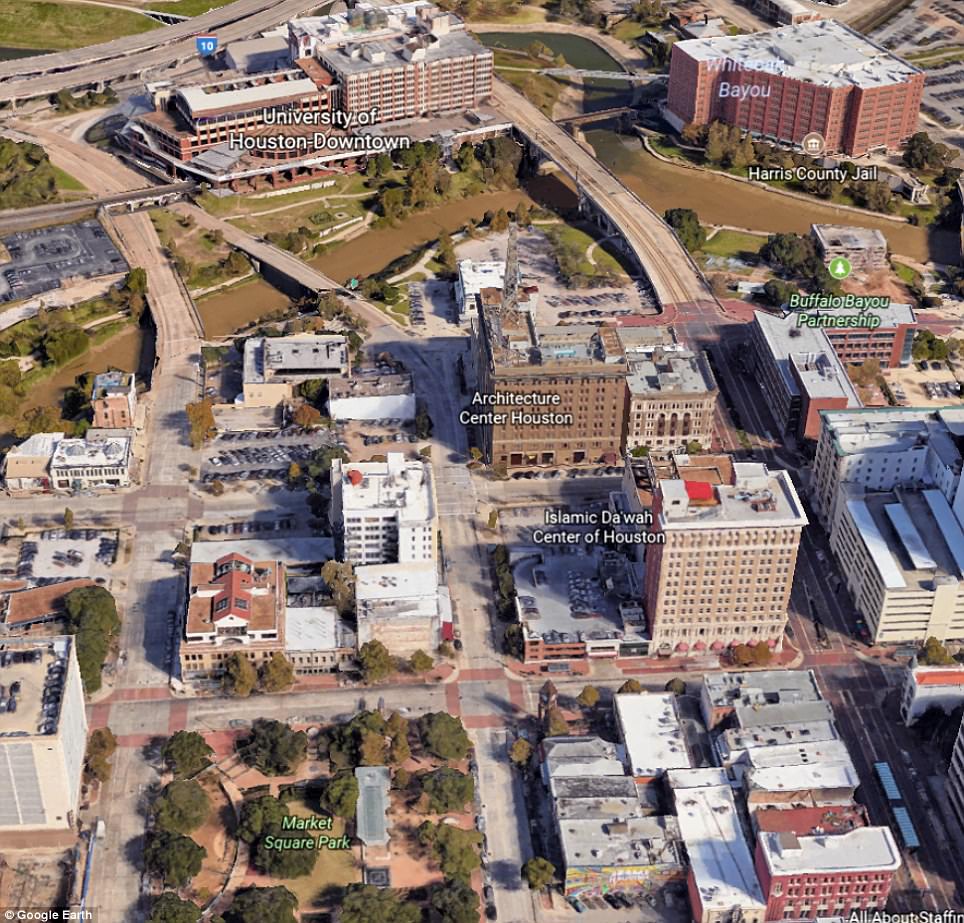 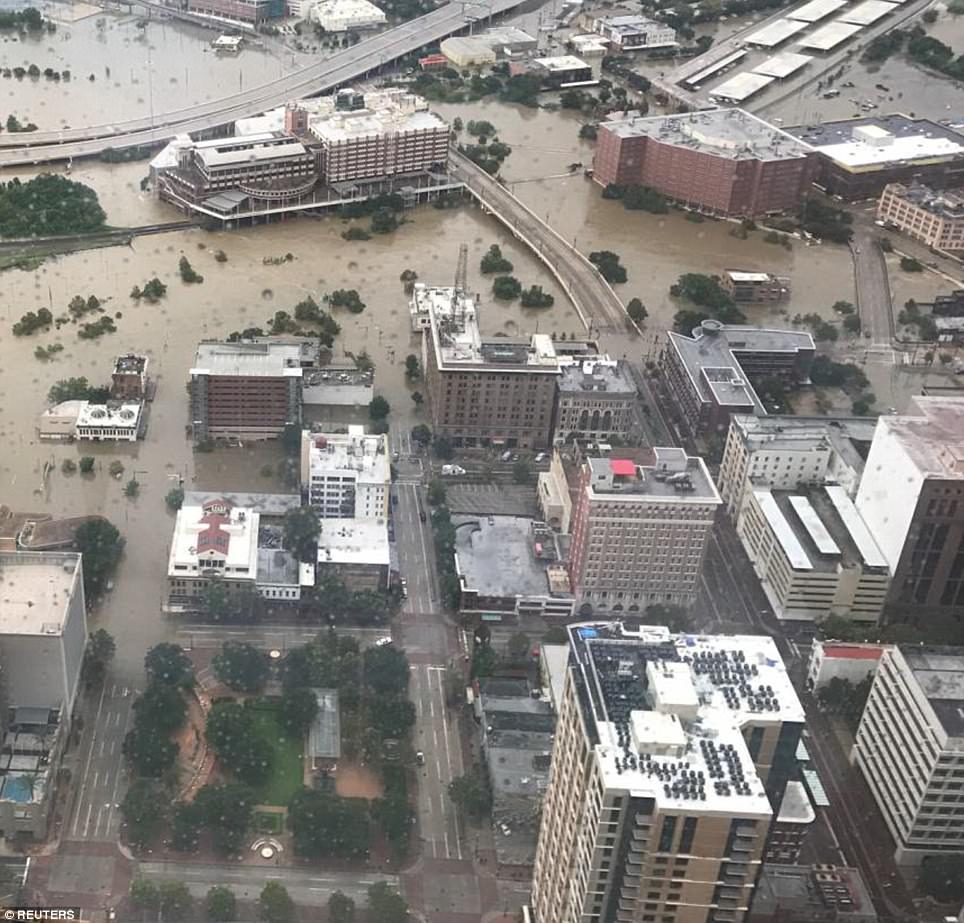 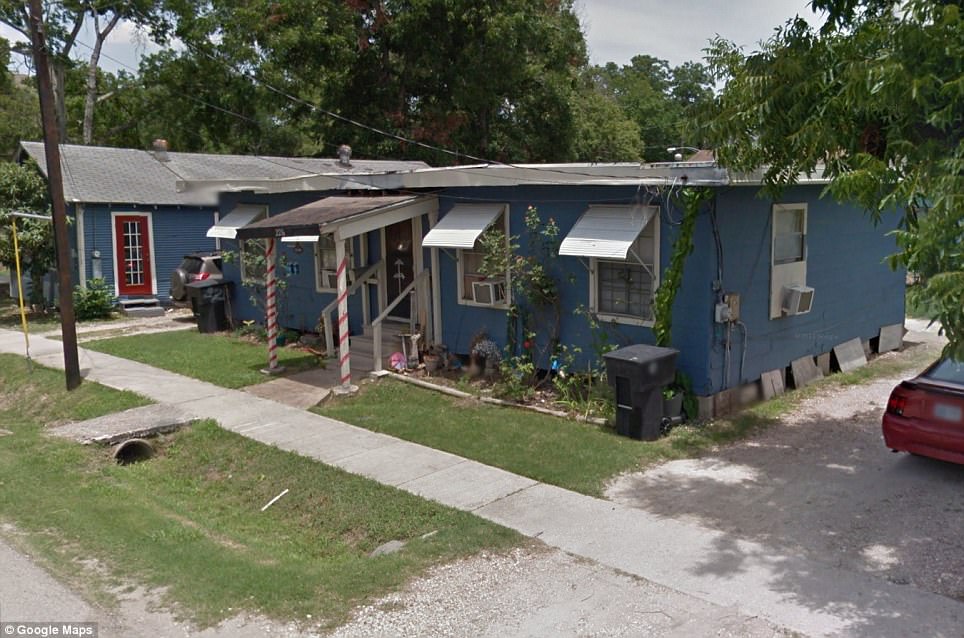 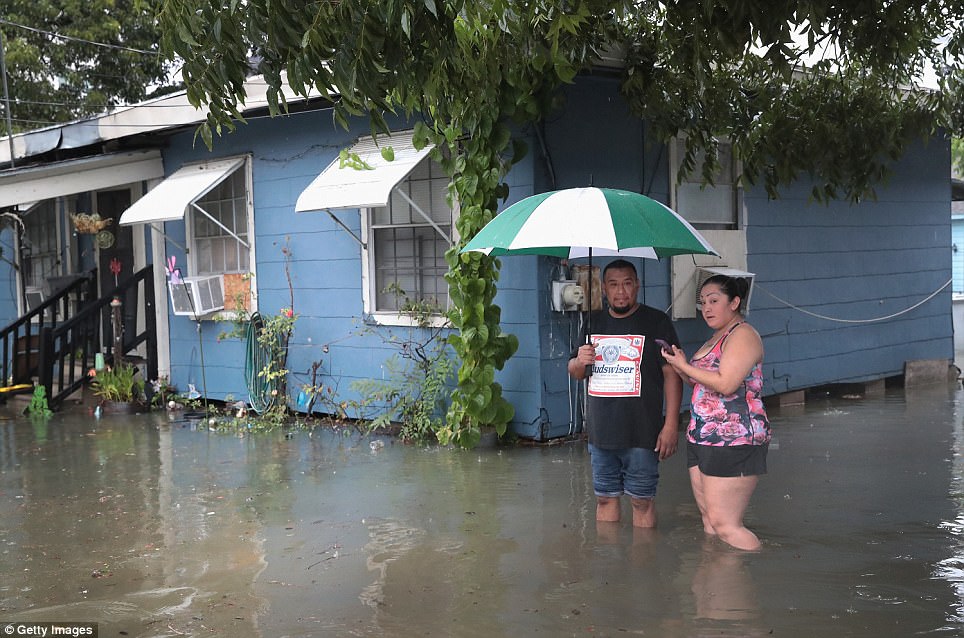 A home in the area of Cottage Grove, Houston, before and after the Hurricane Harvey floods swept through on Saturday 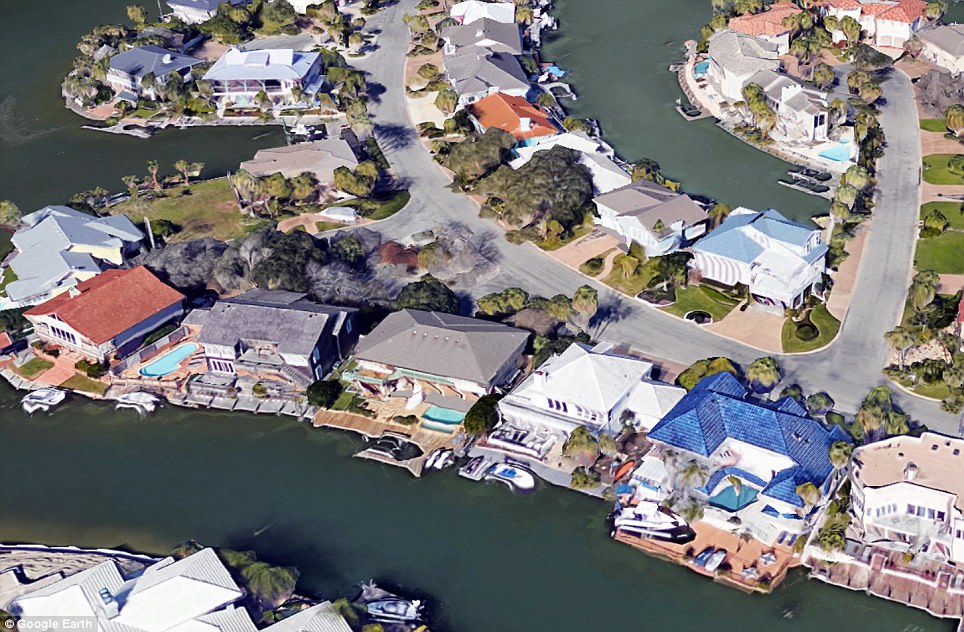 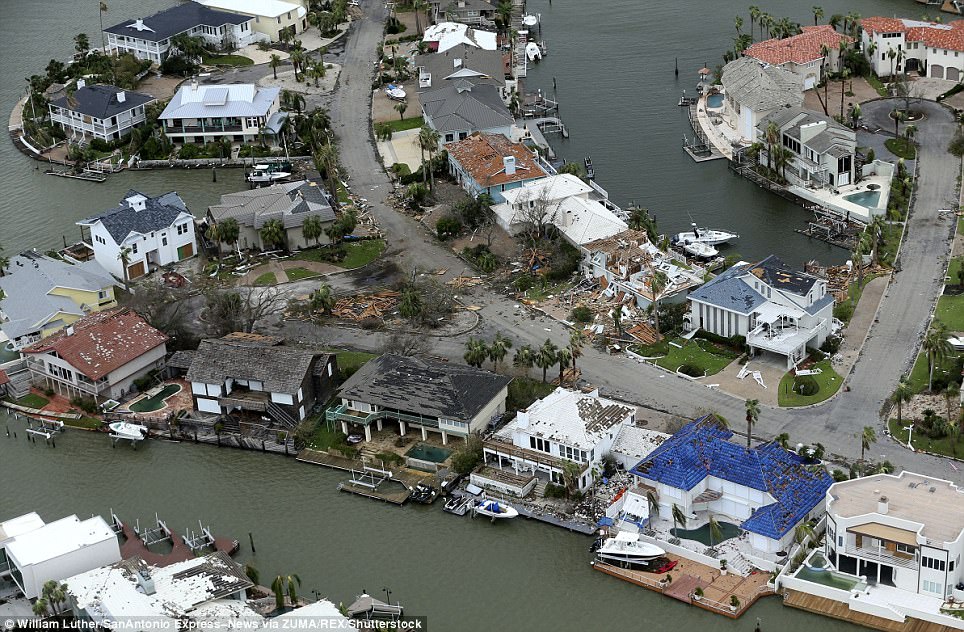 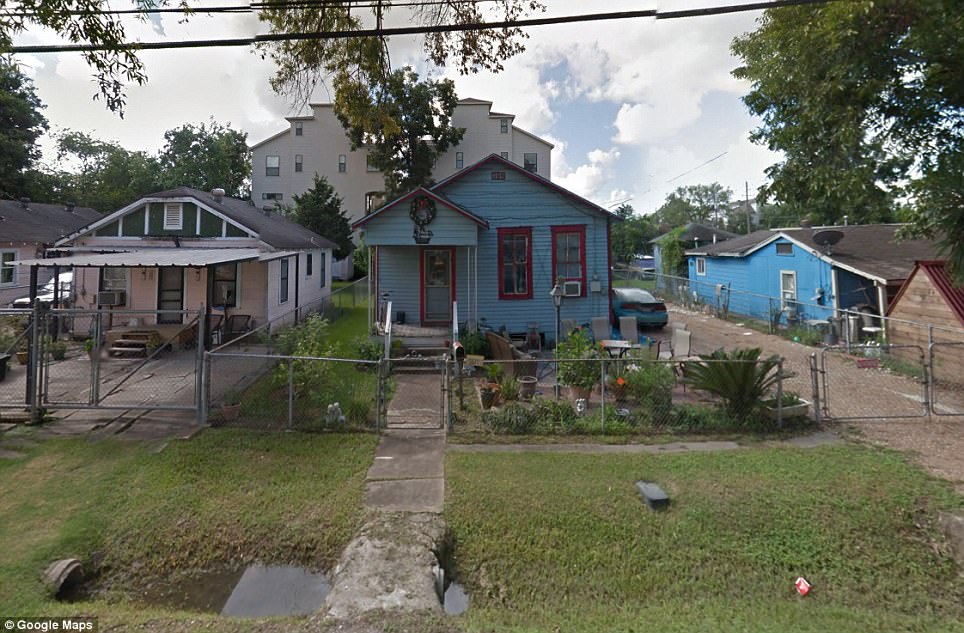 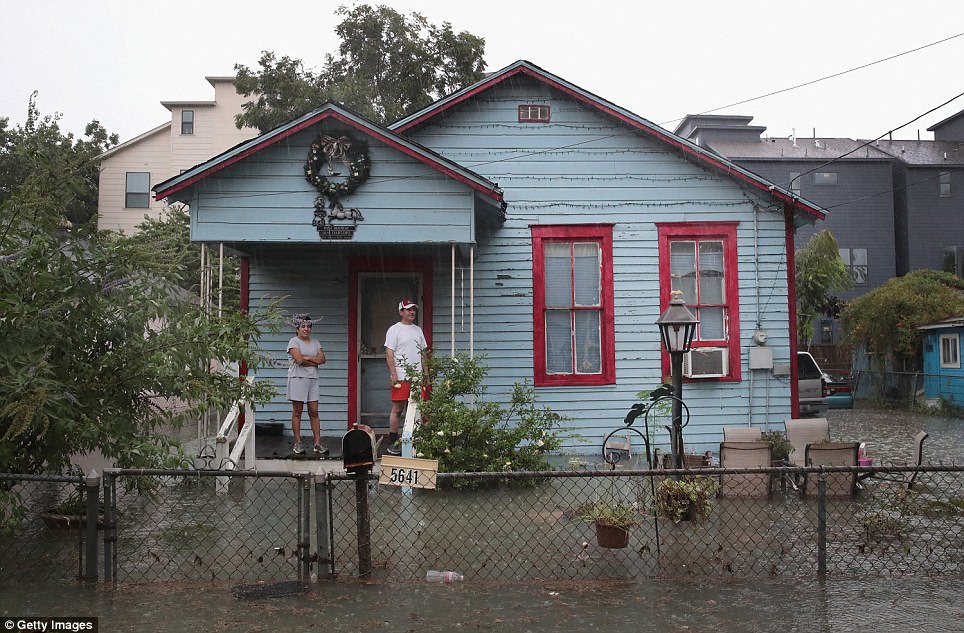 A home in Cottage Grove which is among flooded areas in Houston before (left) and after (right). There is still no mandatory evacuation order in place for the city 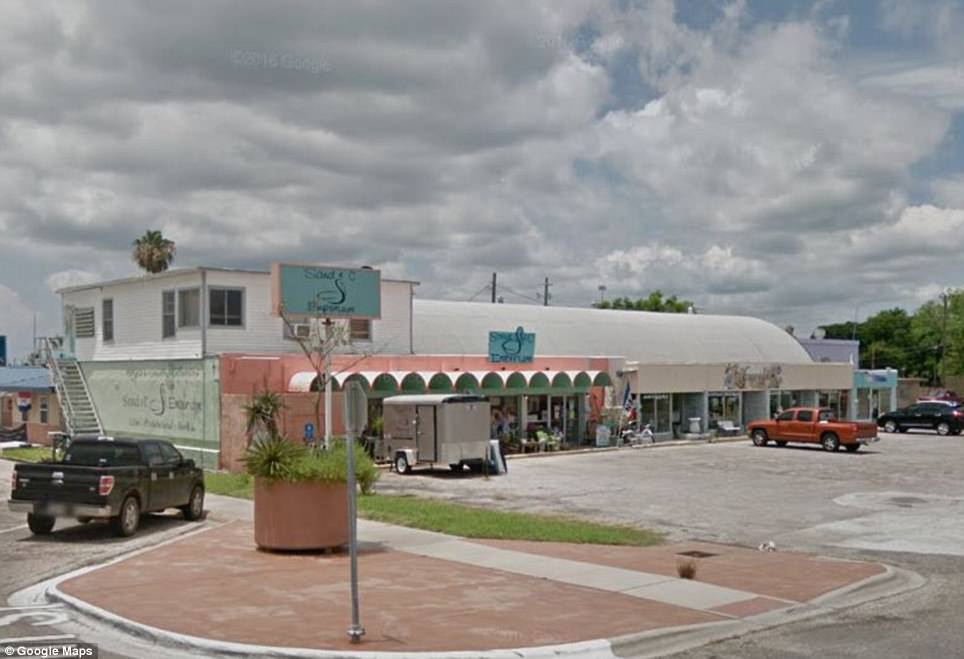 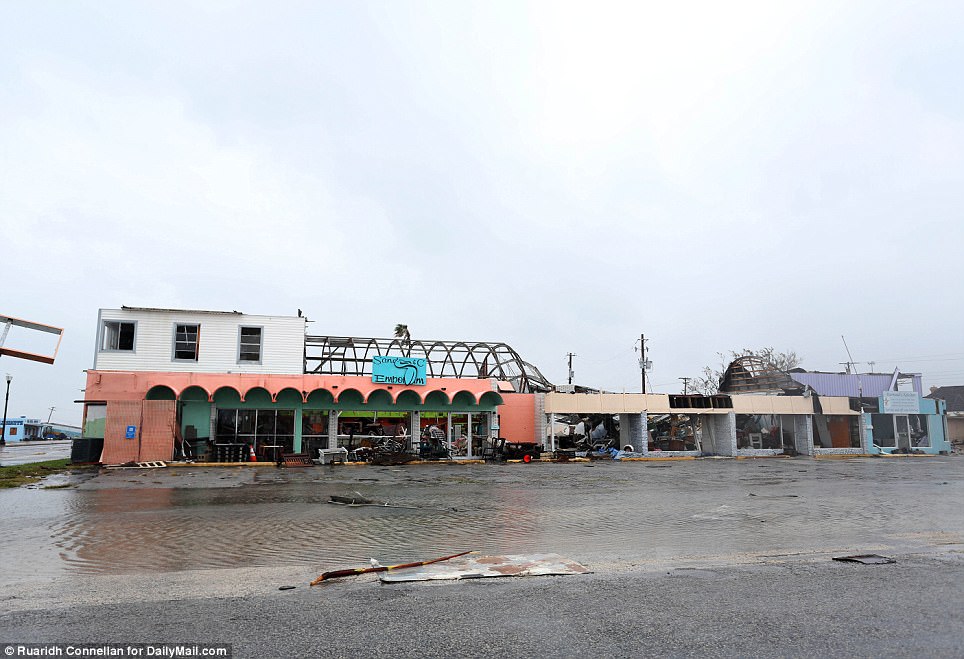 In Rockport, Texas, 130mph winds removed the dome roof of this building and battered the rest of its shell

When the storm began on Friday, Houston was not immediately hit. It was safe from the battering winds which tore apart towns on the coast and many felt confident enough to remain in their homes.

However as the storm moved further inland on Saturday and Saturday, floods – the likes of which the city has never before seen – swept through.

The city woke up to a water world and many, with no alternative, swam to safety or climbed in to rescue boats.

Mayor Turner is now asking anyone with a boat to help with the rescue efforts. Many Texans responded bravely to his call to arms and were out in force on Saturday saving vulnerable neighbors and strangers from the floods.

‘The goal is rescue. That’s the major focus for the day. We want to focus on getting them out of their homes or whatever their stressful situation may be,’ he said.

With 911 operation centers inundated, panicked residents turned to social media to be saved.

They shared pictures of frightened children cowering on kitchen work tops as water covered the floors of their homes.

Heartbreaking photographs from nursing homes showed elderly residents floating around in their wheelchairs and hospital beds. President Trump is scheduled to visit Texas on Tuesday.

As the devastation continues to unfold, authorities are now turning their attention to fundraising efforts.

The Red Cross has launched a designated relief fund (which can be found here) and there will be a Hurricane Harvey Relief Fund organized by the City of Houston.

Celebrities shared their thoughts and prayers for the city’s residents en masse but were taken to task by actor Kevin Hart who, after pledging $25,000 to relief funds, called on a number of stars including Jay Z, Beyonce, Jerry Seinfeld and Justin Timberlake, to make donations.