As deaths stemming from opioid overdoses reached a record high of 93,331 in the US last year, researchers at the University of Washington have developed a new wearable device capable of detecting and reversing an opioid overdose.

The device, which sits on the stomach, injects naloxone when it senses the wearer has stopped breathing or moving in a bid to save lives.

Naloxone, a Food and Drug Administration approved medication, is used to quickly reverse an opioid overdose by binding to the drug’s receptors to block its effects.

During testing, the wearable was successful in detecting that a subject had not moved in 15 seconds and injecting them with naloxone.

Opioids are a class of drugs that are found in the opium poppy plant and have been used to treat pain, according to Johns Hopkins Medicine.

Although the drug has been prescribed by doctors to treat pain it can be found in ‘street drugs’ like heroin and synthetic opioids such as fentanyl.

More than 760,000 people have died since 1999 from a drug overdose and two out of three overdose deaths in 2018 involved opioids.

The Centers for Disease Control and Prevention published data at the end of December 2020 that found opioid deaths rose sharply in the early months of the coronavirus pandemic. 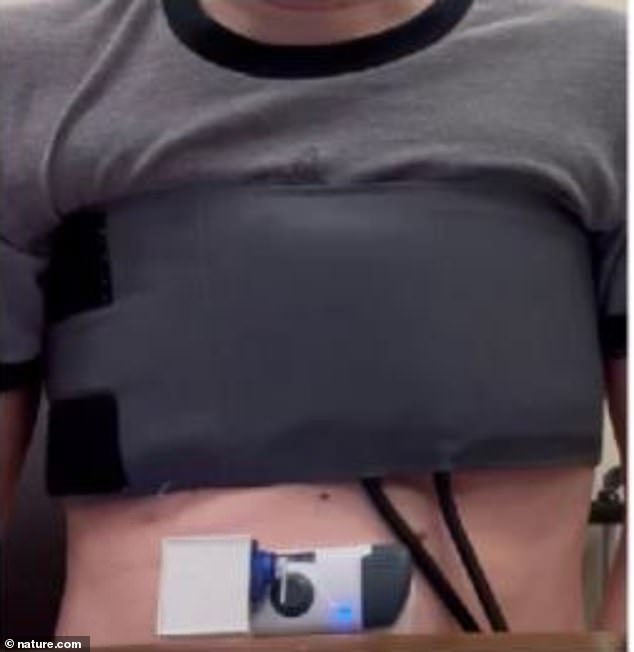 The device, which sits on the stomach, is a wearable naloxone injector system that administers medication when it senses the wearer has stopped breathing or moving 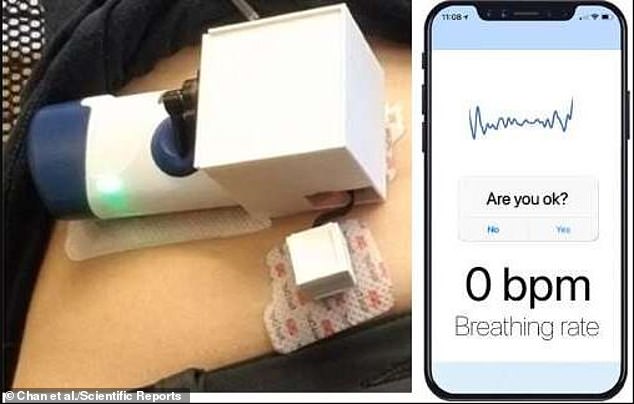 During testing, the wearable proved successful in detecting a subject had not moved in 15 seconds and injected them with naloxone

The agency estimates that about 38 percent more people died of opioid overdoses each month from June 2019 to May 2020, compared to the previous year.

Lead author of the study Justin Chan, a UW doctoral student in the Paul G. Allen School of Computer Science & Engineering, said in a statement: ‘The opioid epidemic has become worse during the pandemic and has continued to be a major public health crisis.

‘We have created algorithms that run on a wearable injector to detect when the wearer stops breathing and automatically inject naloxone.’

Chan and his colleagues designed a three-part solution consisting of a detector, which is on-body accelerometers, a wearable injection system and an actuator to activate the injector system when the user stops moving.

‘To create a closed-loop system, we create an accelerometer-based sensor patch and an actuator,’ researchers shared in the study published in Scientific Reports.

‘Accelerometers are commonly used in smartphones, fitness trackers and many other consumer devices to measure gross motion. 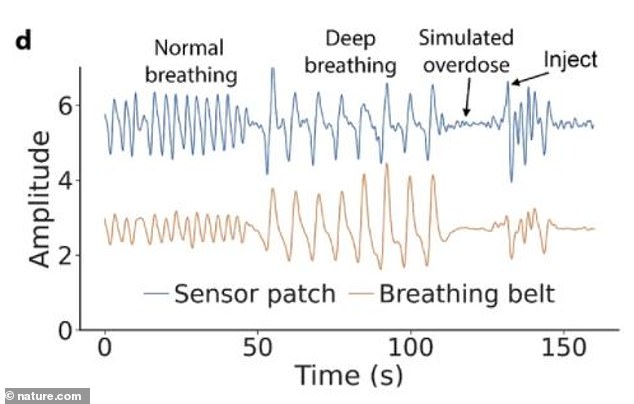 The team began their work by developing a respiratory algorithm that could detect breathing patterns associated with a fatal overdose. This was done with 25 participants at a supervised injection facility in Vancouver, Canada. And then came testing to see if the technology is capable of saving lives

‘These sensors are available in small form factor, low cost, and low-power packages.

‘We designed algorithms to measure both gross body motion and respiration patterns using accelerometers when placed on the body.’

The team began their work by developing a respiratory algorithm that could detect breathing patterns associated with a fatal overdose.

This was done with 25 participants at a supervised injection facility in Vancouver, Canada.

And then came testing to see if the technology is capable of saving lives.

In the second study, 20 participants simulated overdose events in a hospital setting by breathing normally, then performing a breath hold for 15 seconds to mimic an overdose event.

The system activated and injected the study subject with naloxone  15 seconds after detecting the specific breathing pattern.

Blood was also taken from subjects, which showed the wearable injected the medication into the circulatory system, ‘showing its potential to reverse opioid overdoses,’ according to the researchers.