A woman who suffers from a debilitating condition that sees her break out in painful hives every day has told how she has finally found love.

Queenie Sweet, 19, of Exeter, Devon, cannot take a hot shower or drink alcohol without suffering an allergic reaction which causes her skin to burn and itch.

The condition, chronic spontaneous urticaria, saw her bullied at school so severely, she was forced to leave her home in Wales and relocate with her mum, Natalie Sweet, 43.

Since her diagnosis in November 2016, Queenie struggled to date, being labelled as ‘boring’ by men, as she is unable to drink alcohol. 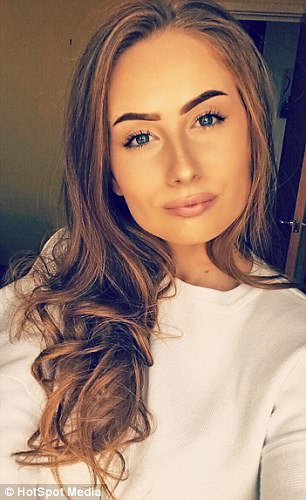 Thankfully she has found love with 20-year-old mechanic, Liam Allen, and is hoping to find a cure for her condition.

The car mechanic was 16 when she suffered her first reaction in May 2015, but it took over a year for doctors to finally diagnose her after she underwent multiple skin tests.

Queenie’s condition was labelled by doctors as life-threatening, so she was bumped up the four-year waiting list to The Eden Unit at Plymouth Hospital, to undergo allergy tests after only a year.

Queenie, who compares the reactions to being bitten by hundreds of mosquitos, says: ‘The first time I had a reaction it was terrifying. After years struggling on the dating scene with men dubbing her ‘boring’ for being unable to drink, Queenie has finally found love with Liam Allen (pictured) 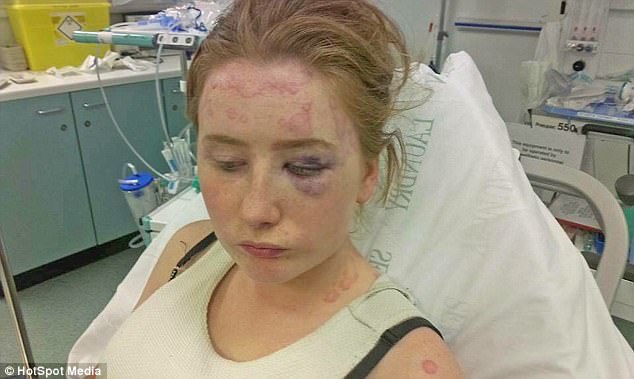 ‘I was already at Withybush General Hospital in Haverfordwest, Wales, getting a black eye checked out, after a girl attacked me the night before.

‘Suddenly I went into anaphylactic shock and could have died. I had to use an oxygen mask because I was struggling to breathe.

‘Doctors couldn’t figure out what was wrong with me. They kept asking me what I was allergic to, but I had never had any allergies before.’

Afterwards, Queenie was targeted by bullies whenever she suffered a reaction.

She says: ‘Some girls would make fun of me and say that it looked like someone had drawn all over my face in red pen that wouldn’t wash off. 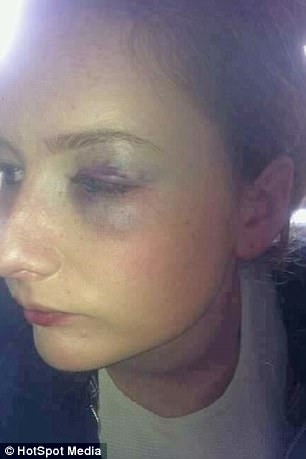 Queenie says that her condition caused her to be bullied and when she cried her tears would cause her condition to flair up. Pictured in hospital (left and right) 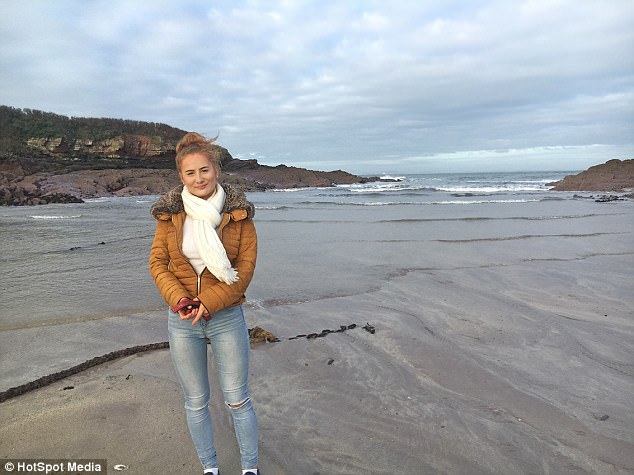 ‘The bullying caused me severe stress, which in turn made my reactions ten times worse.

‘Every time I cried I’d have a reaction, which would cause my face to break out in a red rash. It was so painful and embarrassing.’

Eventually, Queenie and her mum Natalie, a cook, moved from their home in Wales to Exeter, Devon for a fresh start.

The teenager now has an allergic reaction every single day – and carries an EpiPen with her at all times.

She says: ‘I take antihistamines eight times a day, and sometimes the reactions are really scary.

‘If I have a shower that is anything but ice cold, I will break out in hives. If any warm water touches me it feels as though my skin is on fire.

‘Once after I had been swimming at the local pool I had a really bad reaction to the chlorine, a film grew over my eyes, and I thought I was going blind. 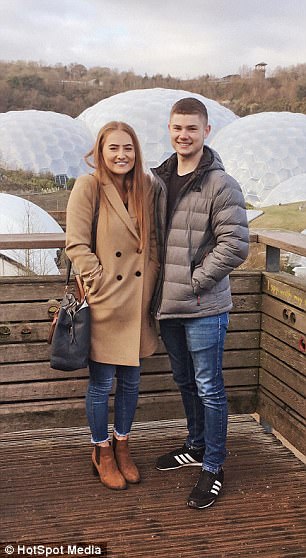 Queenie says that Liam is supportive and sensative of her condition

‘My mum had to carry me into the bathroom and wash it off for me so that I could see again. It was terrifying.’

Queenie is incredibly self-conscious about her skin, and is sometimes left housebound when she suffers a severe painful reaction.

Thankfully, her first boyfriend of three months, Liam, is understanding and supportive of her condition.

She says: ‘Liam knows when I’m feeling insecure, and he makes a conscious effort not to make any comments about my skin.

‘He reminds me all the time that I’m beautiful, even when I’ve just had a shower and I’m literally covered in horrible hives.

‘He’s amazing, and the only person outside of my family that I’ve felt comfortable being around when my condition flares up.’

Queenie adds: ‘Boys I’ve dated in the past would say that it was really boring that I couldn’t drink alcohol and go on nights out with them, and would find it weird that I wanted to cover my skin up. It meant that I could never really get close to or intimate with anyone.

‘I’m lucky to have Liam who loves me no matter what.’

Urticaria is a symptom of anaphylaxis, a severe and potentially fatal allergic reaction.

Queenie says: ‘I’m hopeful that they might find a cure in the future, or that my chronic urticaria might go away as spontaneously as when it first happened.

‘I would love to at least find a treatment that means I can have a shower without so much pain, and live a normal life again.’

WHAT IS CHRONIC URTICARIA?

Chronic Urticaria or hives are a skin reaction that causes red or white itchy welts.

The welts vary in size and appear and fade repeatedly as the reaction runs its course.

Chronic hives are a condition in which the welts last more than six weeks or recur over months or years.

But the condition can be very uncomfortable and interfere with sleep and daily activities.

Often, the cause of chronic hives is not clear.

In some cases, chronic hives are a sign of an underlying health problem, such as thyroid disease or lupus.