By John Mcentee for the Daily Mail

Packed to the gunwales, the pleasure boat Dart Voyager raced upstream, passing the heritage steam train to Paignton and on to Greenway House — once the home of Agatha Christie.

Turning to port, the captain pointed out the Devon holiday home shared by the broadcasting brothers David and Jonathan Dimbleby.

Our jaunt, docking beside Brunel’s rail station at Dartmouth, was one of the highlights of a weekend in this Devonshire spot.

I worried that younger members of our party (four older adults and five offspring, aged between 22 and 26) might be bored by the soporific joys of this beautiful county.

But both young and old fell in love with Court Lodge, our accommodation — a modern, five-bedroom house in Hillfield Village, a luxury development two miles from Dartmouth.

The youngsters played tennis, swam in the outdoor pool or took to the hot tub.

Coming to Devon and not indulging in a cream tea is akin to a trip to Paris without sight of the Eiffel Tower. 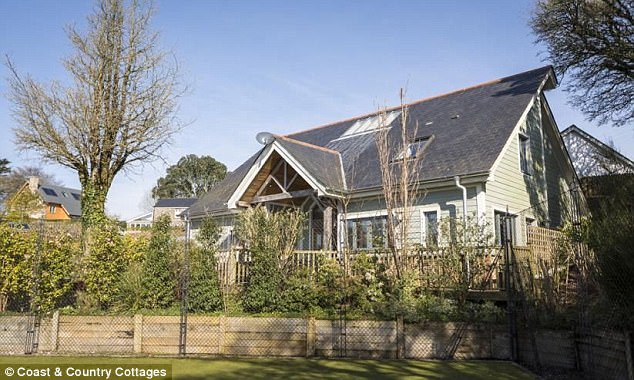 His piece de resistance is a Devonshire cream tea, which we devoured while cruising from Dartmouth Castle.

The next day, at Dartmouth quayside, we joined the queue at Rockfish (motto: ‘Tomorrow’s fish are still in the sea’) for the finest cod, chips and mushy peas.

Food is a serious business here: woe betide anyone who gets their scones in a muddle.

Kevin insisted that his cream tea was superior to the Cornish version. Why so?

‘In Devon, we put the cream on the scone first and the jam after,’ he explained. ‘In Cornwall, they do the opposite.’