Devotees of South African philosophy say it’s the path to happiness… So how Ubuntu is your life?

You’d be forgiven for never having heard of it — but since Meghan spoke of ‘ubuntu’ during the royal visit to South Africa, it’s fair to say that more than a little interest has been sparked in this African philosophy.

During their first engagement just outside Cape Town, Meghan told the crowd: ‘I thank you so much for showing my husband and I the spirit of ubuntu,’ as the world raised a quizzical eyebrow.

Later, after having tea with Archbishop Desmond Tutu, she and baby Archie posed for a photo in which Harry was brandishing a book titled Everyday Ubuntu.

Written by Tutu’s granddaughter, Mungi Ngomane (who has the word tattooed on her wrist), the book came out in the UK last week. Her publishers couldn’t have got a more high-profile endorsement.

Prince Harry and Meghan Markle endorsed a book by Desmond Tutu’s granddaughter entitled ‘Everyday Ubuntu’… so what is this African philosophy?

SO WHAT EXACTLY IS UBUNTU?

Ubuntu is a philosophy that believes in a universal human bond, summed up by the words ‘I am only because you are’.

If you are able to see everyone as fully human, connected to you by their humanity, you will never be able to treat others as disposable or without worth. In other words, very similar to the Bible’s ‘Do unto others as you would have them do unto you’.

In today’s chaotic world, its proponents say the core values of kindness, forgiveness, tolerance and the power of listening have never been more relevant. The message being, if we join together we can overcome our differences and our problems. 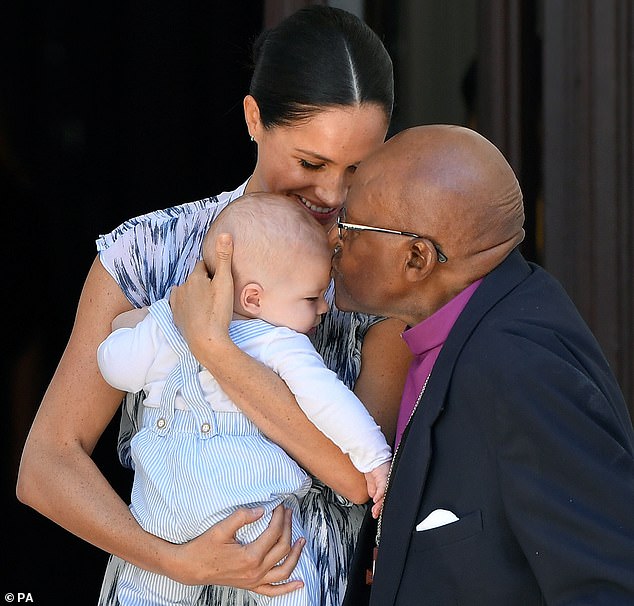 The South African philosophy, Ubuntu, which stems from the apartheid period, teaches that all of mankind is united. (Pictured: Desmond Tutu with Meghan Markle and baby Archie in Cape Town, South Africa)

But ubuntu is more than just the new hygge (the Danish craze for cosiness): its principles stem from South Africa’s anti-apartheid struggles.

Nor is Meghan the first A-lister to endorse ubuntu. In Barack Obama’s eulogy to Nelson Mandela in 2013, he referred to how the former president ‘embodied ubuntu’; and Madonna used the English translation of the philosophy for the title of her 2008 documentary, I Am Because We Are, about Malawian orphans.

Desmond Tutu, who saw some of the darkest days of the apartheid regime, has certainly embraced the philosophy in his life and work. And his influence on his granddaughter is evident. Not only is her book based on his abiding philosophy, it includes the following key lessons built on ubuntu . . .

Go into any bookshop and you’ll find shelves heaving with self-help manuals. But ubuntu is about looking beyond ourselves.

‘We are told to meditate and reflect; to look inside ourselves for answers,’ Mungi writes. But while there’s a place for ‘self-examination’, ubuntu ‘teaches to also look outside ourselves to find answers. It’s about seeing the bigger picture; the other side of the story.’

She adds that while we’re taught to value competition and solo achievements, comparing ourselves to others often leads to a ‘sense of not being enough’. 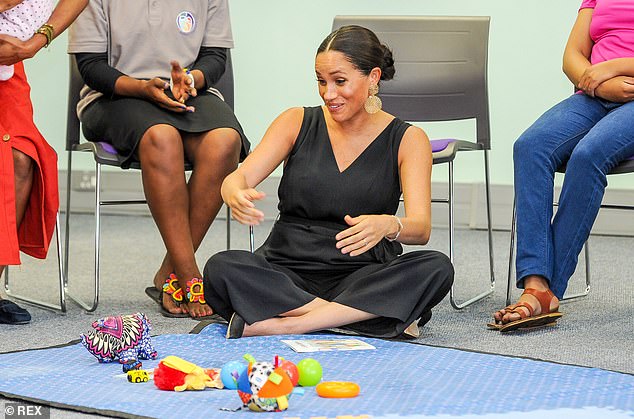 The Duchess of Sussex sits on the floor as she visits the mothers2mothers (m2m) charity in Cape Town, South Africa, on Wednesday. Ubuntu as a philosophy also teaches us not to compare ourselves to others too much

Focusing on the fact we are only who we are thanks to others — parents, teachers, friends, lovers — helps diffuse this competitiveness. ‘Every interaction will have brought us to where we are today.’And once we embrace our connection to others, there’s nothing we can’t do. As an African proverb says: ‘If you think you’re too small to make a difference, you haven’t spent the night with a mosquito.’

Will recycling one piece of rubbish have that much of an impact when you see so much other litter strewn in the street? How about turning out to vote? Someone else will do it, right?

‘Sometimes it’s easy to think our input won’t have any bearing on a situation, but such an outlook can lead us to feel pointless and lost,’ writes Mungi. ‘When it comes to ubuntu, we all count and so does everything we do.’

LEARN TO PUT YOURSELF IN OTHERS’ SHOES

Mungi says one of many lessons passed down from her grandparents was always to consider the other side of the argument. ‘For my mother, it meant being able to see the position of people living on the other side of one of the most oppressive regimes in the world,’ she writes. In Soweto in Johannesburg, Mungi’s mother witnessed first-hand the oppression of black people. ‘Instead of condemning white people, Mum asked herself: “Would I stand up against apartheid if I were white?”

‘She saw white privilege for what it was — unjust and inhumane — but also understood how easy it must be to accept it as the norm if you’d been socialised constantly to believe in white supremacy.

‘In the same situation, most of us wouldn’t want to give up our privilege or question it, because it simply wouldn’t be in our interest to do so.

‘The most important question is always this: In the same circumstances, what would you do?’ 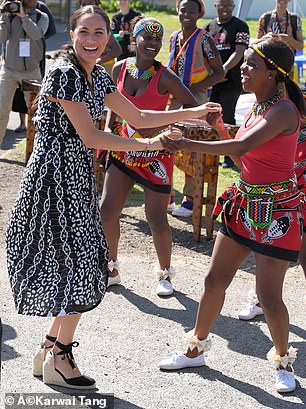 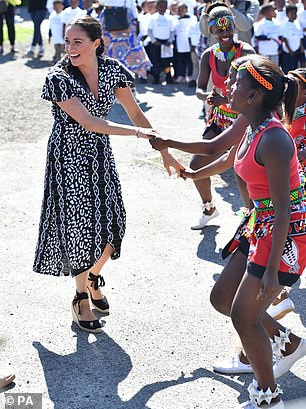 Having a whale of a time! Meghan beamed as she danced with local girls in Nyanga, Cape Town on Monday. Ubuntu also teaches that forgiveness can give back our dignity

THE POWER OF THE F-WORD

It’s hard to forgive — but ubuntu teaches that forgiveness can give us back our dignity. Desmond Tutu once said: ‘If you want peace, you don’t talk to your friends, you talk to your enemies.’ Talking to those with opposing views is what the Tutu Foundation, launched in the UK in 2007, encourages people to do, and the concept is even being employed by the Metropolitan Police in the fight against knife crime. The Ubuntu Round Tables Project brings disenfranchised young people and local police together to foster trust on both sides.

Much has been said of the ills of social media, but Mungi writes that it can serve a positive purpose. While ‘the digital revolution has reduced our capacity to see and speak to other human beings in the flesh’, it has broadened the definition of ‘community’.

‘We are more connected and able to share information faster than ever before in human history. Millions have posted photos online to show solidarity with cities, such as Paris, which have been hit by terror campaigns,’ says Mungi. ‘Most importantly, it says loud and clear, “We are one.”’

…AND FINALLY, LEARN TO LAUGH!

Mungi says there is no better way to feel ubuntu than through the power of laughter. ‘Learning to laugh in the face of the difficulties we all experience is a secret strength of every human being.’