A party-filled long weekend has come to an end for the two daughters of Melbourne underworld figure Roberta Williams and their new pal, Sydney bikie boss Moudi Tajjour.

Tajjour, 34, hosted Williams’ glamorous daughters Dhakota, 17, and Breanne, 25, for the Australia Day weekend in his expansive and flashy new apartment on Sydney Harbour.

But the trio’s 72 hours of celebrations – which included regular Instagram updates and even topless selfies by the sisters – came to an end on Tuesday afternoon.

The trio were seen leaving Tajjour’s inner-city apartment and stepping into a new  black Range Rover, with the bikie boss at the wheel. 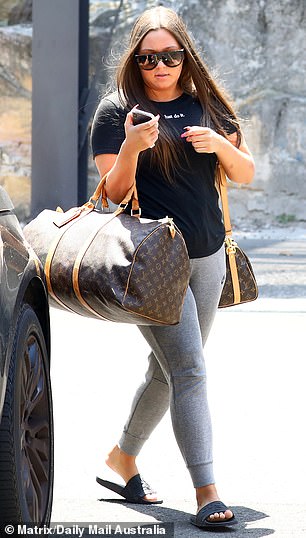 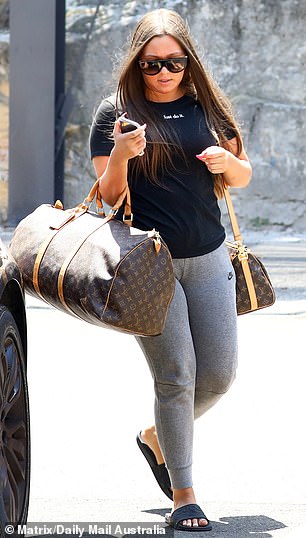 Dhakota (pictured), who is the daughter of Carl and Roberta Williams, carried a Louis Vuitton bag out of Tajjour’s apartment before placing it in the boot of his luxury black Range Rover 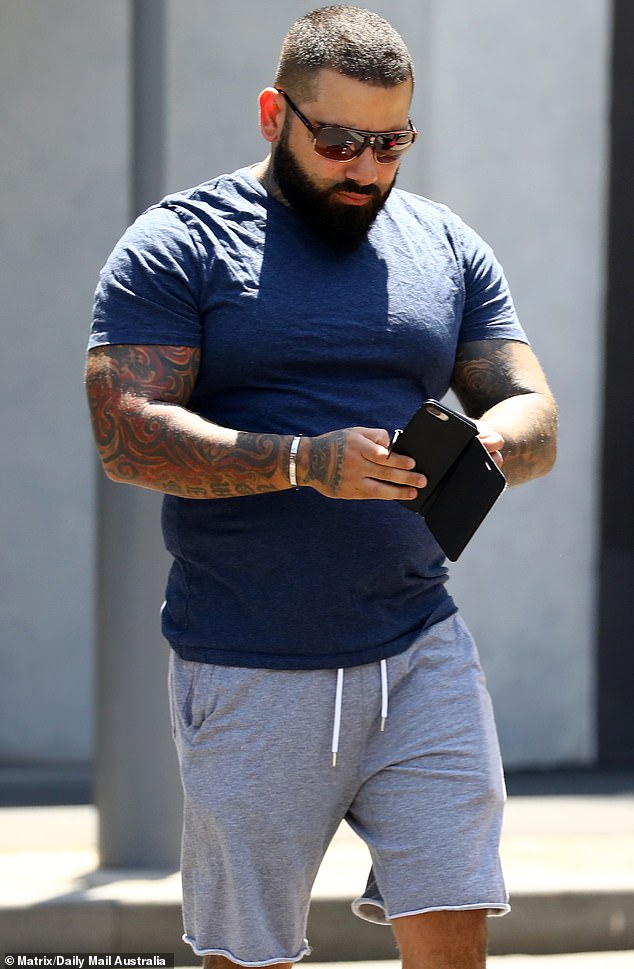 Tajjour (pictured), a leading member of the Nomads OMCG, drove the two Williams sisters to Sydney Airport on Tuesday

Carrying Louis Vuitton bags on their arms and phones in their hands, the sisters looked to have picked up the Sydney fashion vibe with active wear and large sunglasses.

After packing their luggage into the car, Tajjour took the two sisters to Sydney Airport for their flight home to Melbourne.

A day earlier Dhakota and her adult sister posed topless on the balcony of Tajjour’s apartment, with the Sydney Harbour Bridge visible in the background.

During their stay with the Nomads OMCG boss, the Williams sisters regularly posted updates to their Instagram story.

In one video the Williams sisters relaxed with a friend in Tajjour’s plush apartment as the bikie boss lay shirtless on the couch watching TV.

Another showed Dhakota and Breanna laughing in the background as Tajjour jokes with a friend on the phone.

Tajjour was jailed in 2006 over the manslaughter of Robin Nassour, the brother of Fat Pizza star George Nassour. 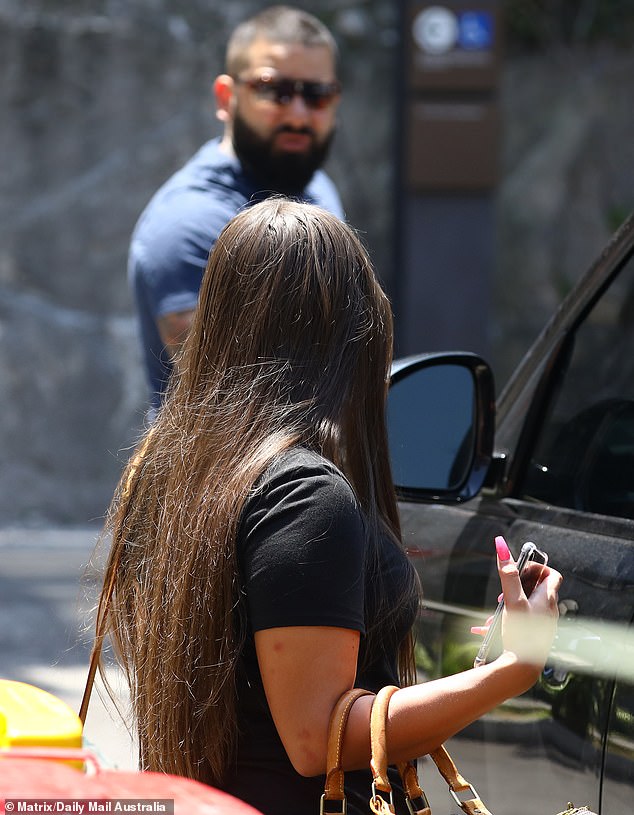 At one point, Tajjour and Dhakota appeared to have a conversation about where the teenager should load her bags 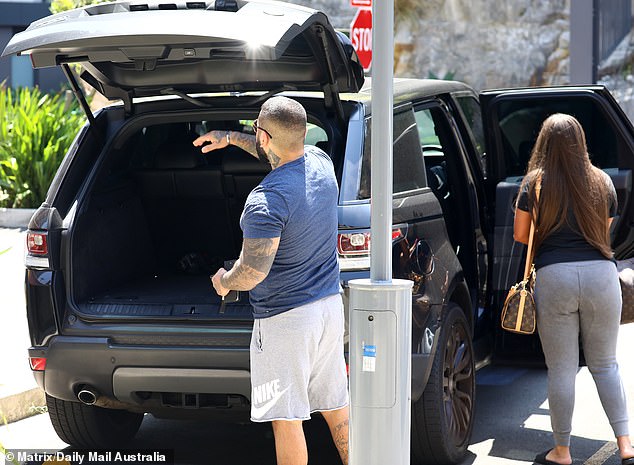 Tajjour (pictured), 34, drove Dhakota (right) and Breanne to the airport in his black Range Rover 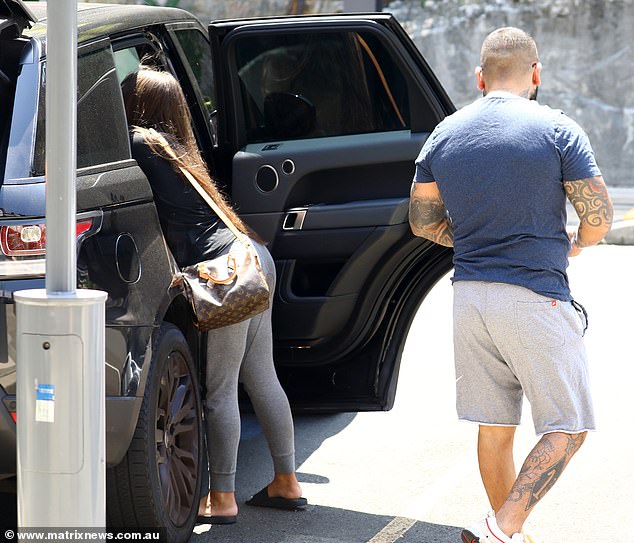 The link between Tajjour and the Williams family is understood to have started with Carl’s ex-wife, and the girls’ mother, Roberta

Moudi’s older brother Sleiman was also convicted over Nassour’s death, and remains in jail having since also been convicted for his role in a drug syndicate.

The Williams family have had their own fair share of experience with relatives in jail, following the bloody Melbourne Underworld War at the turn of the millennium.

Dhakota’s father Carl was sentenced to life in prison in 2006 after being convicted of masterminding four murders during the deadly war.

Carl was convicted over the murders of Jason Moran, his father Lewis, Mark Mallia and Michael Marshall between 2003 and 2004.

But unlike Tajjour, the underworld heavyweight did not make it out of prison alive, being beaten to death with the seat of an exercise bike by a fellow prisoner in 2010. 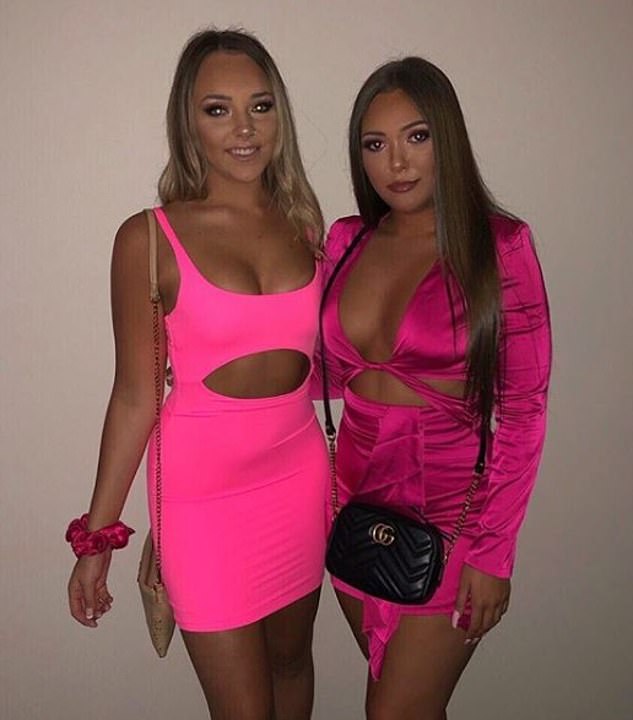 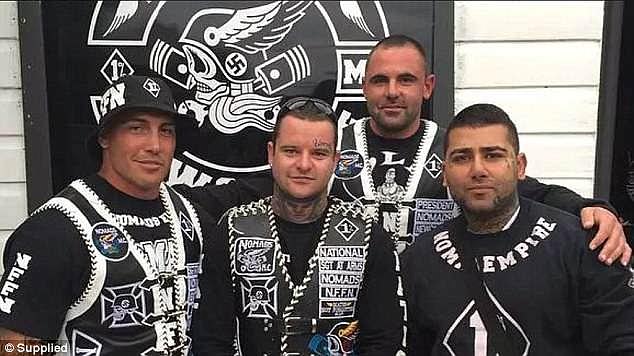 Tajjour (front right) recently took over the role of the Nomads OMCG president, which was once held by his older brother Sleiman

At the time of his death Dhakota was just nine.

The link between Tajjour and the Williams family is understood to have started with Carl’s ex-wife, and the girls’ mother, Roberta.

She has previously spoken of her plans for a reality TV show about her family and has asked Tajjour to be a financial investor and potential star.

Tajjour rose to prominence following his brief marriage to Sanaa Mehajer, the sister of disgraced businessman Salim Mehajer, in late-2017.