Diabetic, 33, with erectile dysfunction hopes a ‘vampire penis injection’ will allow him to conceive

A man whose diabetes has left him with erectile dysfunction can finally try and have a baby after having a ‘vampire penis’ jab.

Jimmy Croxton, 33, feared his condition would mean him and his girlfriend of three years, Natalie Wilshaw, also 33, would never raise a child in their home in Newcastle-under-Lyme, Staffordshire.

But his hopes have been restored, thanks to a P-shot which costs £1,200, a variation of the anti-ageing ‘vampire facial’ used by Kim Kardashian.

Mr Croxton, a sales executive, has already seen an improvement since his first jab last month, after years of embarrassing sexual encounters in his ‘bachelor years’.

Jimmy Croxton, 33, has struggle dot conceive naturally with his girlfriend, Natalie Wilshaw, 33, for three years because his diabetes has left him impotent 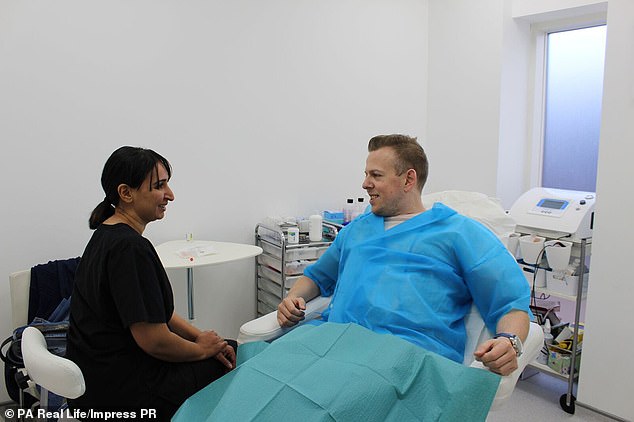 Mr Croxton had a P-shot last month, and will have another in January, which costs £1,200 each time. It is a variation of the anti-ageing ‘vampire facial’ used by Kim Kardashian. 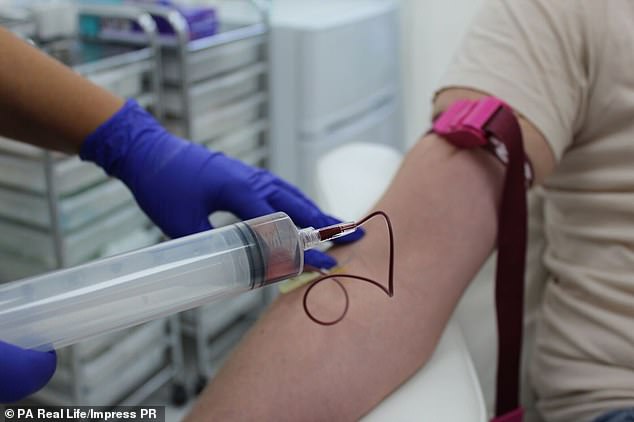 The P-Shot takes plasma – the element of the blood that stimulates tissue growth – from the blood and injects it into the penis. This aims to repair the nerve endings for Mr Croxton

The P-Shot takes plasma – the element of the blood that stimulates tissue growth – from the blood and injects it into the penis, with the aim of repairing his wasted nerve endings.

Within a few days, Mr Croxton’s erections were lasting longer and Ms Wilshaw said his penis was looking plumper.

‘It has really given me a confidence boost,’ Mr Croxton said.

Mr Croxton was diagnosed with type 1 diabetes at 18, a condition where the body can’t produce enough of a hormone called insulin.

Mr Croxton was told he would need to inject himself with insulin four times a day for the rest of his life after experiencing symptoms – he lost five stone of weight within just a few months and noticed a dramatic increase in his need to pass urine,

But he experienced no adverse side effects from the condition until 2010, at roughly the age of 25, when he was living a single life.

Without a serious partner, he began to experience difficulties with his sexual performance. 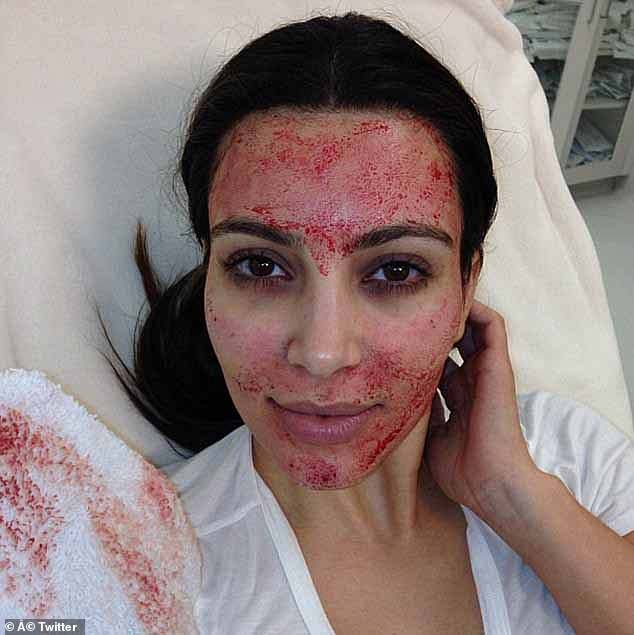 The P-shot, which is a variation on the so-called Vampire Facial, which Kim Kardashian posted a now infamous snap of herself undergoing in 2013 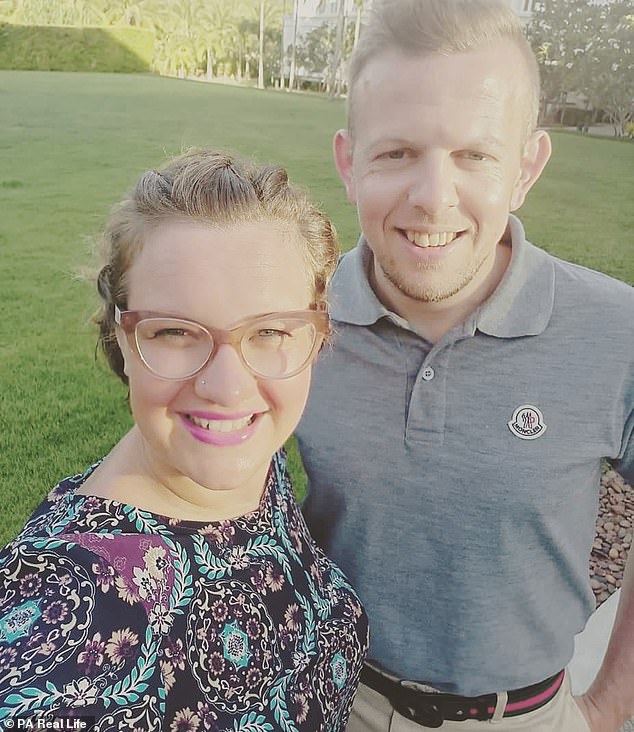 Mr Croxton, pictured with Ms Wilshaw, began experiencing difficulties with his sexual performance when he was around 25 years old, eight years after his diagnosis 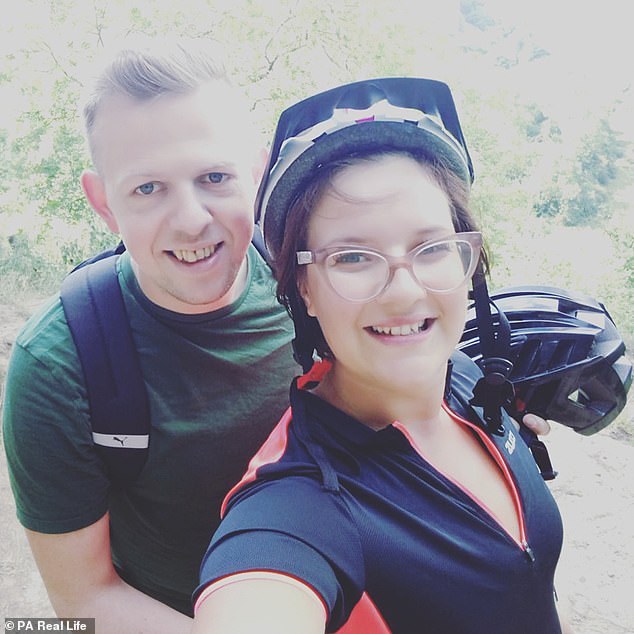 Ms Croxton fell in love with Ms Wilshaw, who he said he still has an active love life with, and hopes the procedure will help him be able to ejaculate again, and have a baby

WHAT IS TYPE 1 DIABETES?

Type 1 diabetes afflicts some 400,000 people in the UK, one of the highest rates in the world. Around 1.25 million Americans are also affected.

It starts when the body mistakenly targets insulin-producing cells in the pancreas that maintain blood sugar levels.

As a result, it can drastically affect the body’s major organs and sufferers are forced to inject themselves regularly with insulin.

Erectile dysfunction has been linked with diabetes in research.

The study, published in International Journal of Impotence Research, looked at 151 men ages 18–35 with Type 1 diabetes and 66 men of the same age without diabetes.

They found that 37 per cent of the subjects with type 1 diabetes had erectile dysfunction, compared to only six per cent of those without diabetes.

He said: ‘I wasn’t a huge womaniser, going out on the town each night looking to pick up girls.

‘But when I did spend the night with a woman I would sometimes have problems keeping an erection which, when you’re a young man, can be very tough.’

Mr Croxton was told by his GP that his diabetes was behind his difficulties.

Over the next few months, Mr Croxton’s problem became worse – with around half his sexual encounters resulting in a failure.

Mortified, he started warning potential sexual partners that his condition often made intimacy a challenge.

Mr Croxton said: ‘It’s very difficult explaining it to girls, because there is still so much stigma about erectile dysfunction.’

‘People think it’s some big joke, making it very embarrassing to explain, especially if you don’t know the person that well.’

But they had little effect and his relationships with women ceased to exist at all.

He said: ‘When I was about 26 I was going out with a 19-year-old and, I think because she was so young, she just didn’t understand why our lovemaking wasn’t working.

‘The relationship fell apart for several reasons, but that was definitely a big one.’

Mr Croxton’s problem took a turn for the worse when he was 27 – the nerve damage resulting from his diabetes meant he stopped being able to ejaculate.

Retrograde ejaculation can occur as a consequence of nerve damage – autonomic neuropathy – in diabetic males, as well as after prior prostate or urethral surgery.

Instead of coming out of the urethra during ejaculation, the semen enters into the bladder instead. 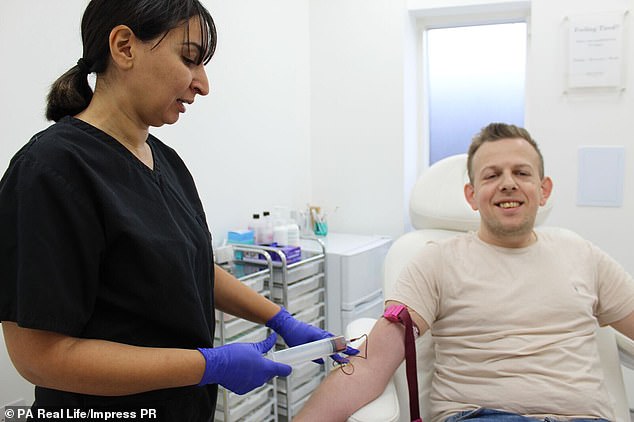 Mr Croxton, pictured receiving the P-shot from Dr Shirin Lakhani, was keen to try the possibly life-changing treatment after hearing about it from a friend 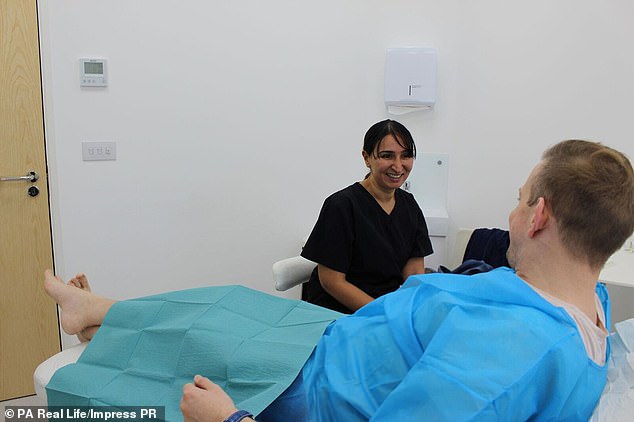 WHAT IS THE P-SHOT?

The P Shot is a pioneering treatment which claims to improve erectile issues such as impotence or the inability to maintain an erection, while also offering increased size and girth.

The method involves injecting the penis with your body’s own Platelet Rich Plasma (PRP), which ‘helps to improve the health and vitality of the penis’.

The P Shot is also claimed to rejuvenatinate by promoting increased blood flow to the penis, which ultimately strengthens the erection and enhances the appearance.

Men have claimed the shot boosts their sexual performance and gave them 10 to 20 per cent increase in length and girth.

He said: ‘I would have the sensation of the orgasm without releasing any sperm.

‘It was very unnerving and I knew immediately that this could be a big problem if I ever wanted to have kids.’

Just as he began to look into how to tackle the problem, he suddenly fell madly in love with Ms Wishaw, a team leader at a mental health facility.

He quickly realised he wanted her to be the mother of his children – but they quickly found it would be nearly impossible for them to conceive naturally.

The couple began looking into adoption: ‘It was quite upsetting for us both,’ recalled Mr Croxton, who still enjoys an active sex life with his partner, despite his difficulties.

He said: ‘Natalie and I have wanted to have children for some time, so I leapt at the chance of trying it.

‘There is a lot of stigma surrounding erectile dysfunction and it’s something that people often treat quite flippantly.

‘But it’s stopped us from having kids and that’s no laughing matter.’

Then, a friend told Mr Croxton about a radical new treatment for men, designed to restore erectile function.

The P-shot is a variation on the so-called Vampire Facial, which Kim Kardashian posted a now infamous snap of herself undergoing in 2013.

After a consultation in London at the Elite Aesthetics clinic, he booked in for his first jab, which claims to provide ‘firmer, stronger and larger more powerful erections.’

Results are reportedly seen after one treatment, but can be ‘topped up’.

Mr Croxton, who hopes a further shot in January will help him to ejaculate normally, said: ‘If Natalie and I can then conceive, it will mean the world to us both to have a child together.’

Speaking out to encourage more men with erectile problems like him to seek help, rather than suffering in silence, Mr Croxton said the cutting-edge procedure works by stimulating the growth of new tissue and rejuvenating the sexual organ.

He added: ‘Having the procedure has also opened my eyes to the damage I was doing to myself by not maintaining my sugar levels better, so I have gone on a strict diet now, cutting out fruits and weighing every meal I eat, so I know how much insulin to inject myself with.’

‘Natalie is the love of my life, but I feel this has held us back from what we really want – which is to have kids together.

‘Getting back to my old self would be a dream come true.’

Dr Shirin Lakhani, who will administer Jimmy with the P-Shot at Elite Aesthetics, said: ‘The P-Shot is an effective treatment for erectile dysfunction due to local causes, including nerve damage or vascular issues and diseases such as diabetes.

‘By improving the blood supply and triggering tissue regeneration patients do notice an improvement in their ability to achieve and maintain firmness of erections which, in Jimmy’s case has had a huge impact on his life.’

Erectile dysfunction has been linked with diabetes in research.