Diamond and Silk accused of lying under oath to Congress

Two of President Trump’s most visible supporters made multiple false statements in front of the House Judiciary Committee on Thursday.

Social media personalities Lynnette Hardaway and Rochelle Richardson, better known as Diamond and Silk, were called to Capitol Hill in order to deliver testimony during the Filtering Practices of Social Media Platforms hearing.

That hearing descended into spectacle by the end however, with almost every member of the committee walking out during the pair’s testimony.

Those false statements included their claim that they had never been paid by the Trump campaign and that Facebook had never reached out to them after they accused the company of censoring their content.

An FEC filing from November 22, 2016 shows that DONALD J. TRUMP FOR PRESIDENT, INC. paid Diamond and Silk $1,274.94 for fieldwork, while Facebook has released multiple letters the company wrote to the two women that were sent to both their private and public accounts.

Big business: Lynnette Hardaway and Rochelle Richardson, better known as Diamond and Silk, testified on Capitol Hill after claiming their content was censored by Facebook (pair arriving on Thursday above)

Little attention was paid to the claim that Facebook had been censoring Diamond and Silk until earlier this month, when they received a notice stating that their content was ‘unsafe.’

That suddenly provided some weight to their claims, which Facebook in turn blamed on an ‘enforcement error.’

As a result, the two women were asked to give testimony to Congress.

‘Ms. Hardaway have you ever been paid by the Trump campaign?’ asked Rep. Sheila Jackson-Lee (D-Texas) at one point in the hearing.

‘No, we’ve never been paid by the Trump campaign,’ replied Hardaway (aka Diamond).

‘Not $5? Not $100? What about $1,274.94?’ asked Jackson-Lee, who was in possession of FEC filings which very clearly stated how much money the two women had received from the campaign.

Hardaway did not budge however, responding: ‘We have never been paid.’

This later led to a far more heated exchange between the women and Rep. Hakeem Jeffries (D-NY)

‘I think you stated on the record today, at least three times, quote, we were not paid by the Trump campaign? Is that correct?’ Jeffries asked. 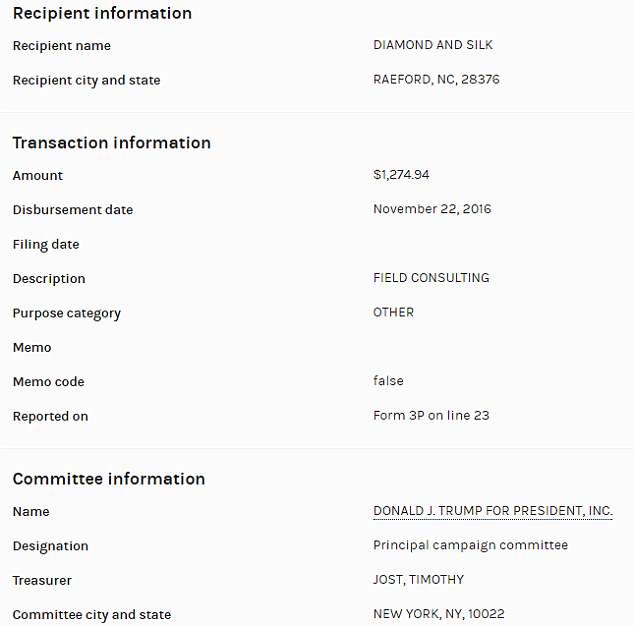 That is when Richardson (aka Silk) stated: ‘We’re familiar with that particular lie; we can see that you do look at fake news.’

An incredulous Jeffries then asked: ‘Are you calling this FEC document fake?’

Richardson explained that she and the filing were both true.

‘Nobody is lying. However, there may have been a mistake from the Trump campaign whenever they wrote what the $1,274.94 was for,’ she told Jeffries.

‘Actually, this was for, we were asked to join the Women for Trump tour back in 2016. And Ms Lara Trump asked that our airline tickets be refunded back to us because we paid for those tickets when we went from New York to Ohio.’

The claim that Facebook was censoring the pair is also difficult to back up, as engagement on their page has been relatively steady throughout 2018, despite their allegations of censorship.

‘Shame on the people who don’t see we’ve been censored. But when the Black Lives Matter people do it, everyone is up in arms!’ declared Hardaway at one point.

‘Let me just say this right here. If the shoe was on the other foot and Mark Zuckerberg was a conservative, and we were liberals, all fences and all chains would’ve broke loose, you know it and I know it!’

It was all too much for Rep. Ted Lieu, who walked out before the hearing was over, but not before using his time to state: ‘This is a stupid and ridiculous hearing.’

He then said that he remained in the room so that he could ‘enter some facts into the record to at least try to salvage some of this hearing’ for the committee.