Princess Diana’s biographer Andrew Morton has revealed that the late Princess would be ‘devastated’ to see that Princes William and Harry had fallen out.

The claim comes after extracts from Finding Freedom: Harry, Meghan and the Making of a Modern Royal Family, a biography of Prince Harry and Meghan Markle, unearthed revelations about the relationship between brothers Harry and William.

Writing for the Mirror, Andrew Morton said that, through the revelations in the book, Prince Harry has not just burnt his bridges with the Royal Family but buried the ashes too.

The book strikes comparisons between Harry and his mother Princess Diana as it talks about Buckingham Palace’s ‘vipers’, similar to the ‘men in grey’ that Diana talked about.

Morton wrote: ‘Diana, who doted on both of her sons, would be devastated to witness the breakdown of Harry’s relationship with William.’

He said that Diana took comfort knowing that Prince William, who was always destined for the throne, would be able to lean on his brother for support while carrying out his duties.

Morton said: ‘They had a unique relationship. No one else can understand the pain of losing your mum at such a young age, then having to walk behind her coffin with the world watching. No matter how much Harry and William love their wives, neither woman can truly know what this felt like.’ 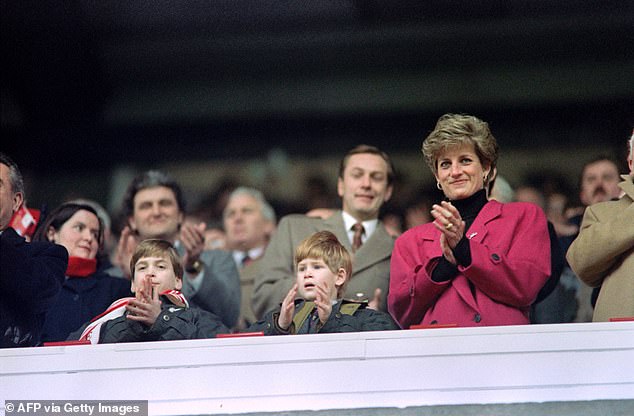 The claim comes after extracts from a biography of Prince Harry and Meghan Markle, unearthed revelations about the relationship between brothers Harry and William (pictured in 1992)

Despite this, Morton claims that Harry’s actions have made him appear even more like his mother.

Using a football analogy, Morton said that the Royal Family viewed Prince Harry, Meghan Markle and Princess Diana as Championship players, when they believed themselves to be deserving of the Champions League.

Because of this, despite her disappointment, Diana would have understood Harry’s desire to split from the Royal Family, Morton said.

He also described Meghan as Kate’s worst nightmare in the fight for the spotlight.

Other claims made in the Finding Freedom biography include Prince Harry branding his brother a ‘snob’ after William warned him to take things slow with Meghan Markle.

The Duke of Cambridge told Harry not to ‘rush this’ and ‘take as much time as you need to get to know this girl’ amid fears the younger brother was being ‘blindsided by lust’ for the American actress.