Diane Abbott’s favourite canned cocktails are ‘too cheap and too strong’, warn experts

Diane Abbott’s favourite canned cocktails are ‘dangerous’ because they are too cheap and too strong, warn experts

People drinking cans of pre-mixed cocktails may be getting more than they bargained for and putting their health at risk, experts have claimed.

Cans of gin and tonic, whiskey and coke, or mojito – like the kind Labour MP Diane Abbott was caught drinking on the London Overground last week – could be stronger than many drinkers realise.

The drinks have even been called ‘dangerous’ because they are so cheap and strong but are marketed in small, colourful packaging.

Social media users last week claimed Marks & Spencer branches had sold out of its £2 mojito cans after the Shadow Home Secretary was snapped drinking one.

And the supermarket also said its sales of G&T cans had risen 24 per cent after the main character drank them in the BBC comedy, Fleabag.

Diane Abbot MP, Labour’s Shadow Home Secretary, was snapped drinking a mojito in a can on a train in London – she later apologised because drinking alcohol is banned on Transport for London services

Containing an eight per cent alcohol content, the drinks ‘pack quite a punch’, one expert said in a warning about the popular cans.

Pre-mixed drinks are available from most supermarkets, with Asda selling Jack Daniels’ and cola 330ml cans, with five per cent alcohol, for £1.80 each.

A Sainsbury’s own-brand gin and tonic 250ml can costs just £1 and contains five per cent alcohol.

And Tesco sells its own-brand Woo Woo cocktail in a 250ml can for the same price of £1 – it contains four per cent alcohol.

Addiction therapist Eileen Kelly told The Times: ‘Research shows that teenagers and young drinkers are attracted to convenient cheap drinks such as these.

‘Because of their packaging and small size, people may not realise that these drinks pack quite a punch.

‘Those who market and sell these drinks do carry a public health responsibility and pricing at the right amount is critical.’

Popularity of M&S’s canned mojito reportedly shot up after a photo of Ms Abbott drinking one on a London Overground train was posted on Twitter.

Drinking alcohol is banned on Transport for London services and Ms Abbott later tweeted an apology.

She said: ‘A photo of me drinking from a can of M&S mojito on the Overground has been circulated. I’m sincerely sorry for drinking on TFL.’ 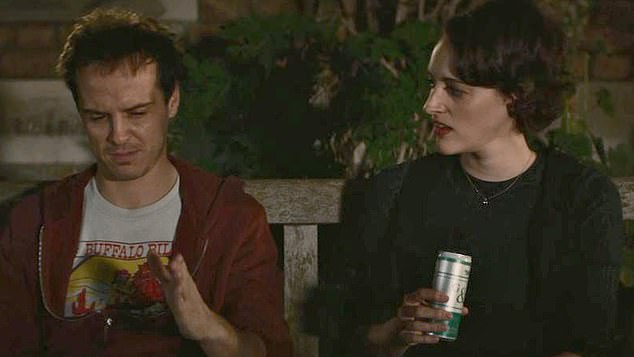 Sales of gin and tonic cans reportedly shot up by 24 per cent at Marks and Spencer after the main characters in the BBC’s comedy, Fleabag, drank them on a park bench

Sales of gin and tonic cans also rose at M&S after the main character in BBC comedy Fleabag drank them in a park with her priest friend, the company said.

The colourful packaging of the drinks makes them look weaker than they really are, according to Steve Clarke, of the Priory Life Works Hospital rehab in Surrey.

He told The Times: ‘I don’t think people fully appreciate that they are, in some cases, higher volume and quite dangerous.’