A mother who endured 18 months of a debilitating shoulder pain has been given the devastating diagnosis of stage four lung cancer – despite never having smoked in her life.

Diane Codd, from New Zealand, started suffering discomfort in her right shoulder in mid-2017 – but she was referred to a physiotherapist after seeing a doctor.

Over the months, the 45-year-old said she began experiencing tiredness, nausea and a loss of appetite but she just put it down to having a ‘busy life’.

As the pain worsened, the mother – who works as a beauty lecturer – met with different specialists but no one could figure out the cause of the crippling discomfort.

But by the time she was diagnosed with advanced cancer in December 2018, the disease had already spread beyond the lungs into her chest, hips and brain.

Diane Codd (pictured with son Ethan, 14, and husband Adam) has been given the devastating diagnosis of stage four lung cancer – despite never having smoked in her life 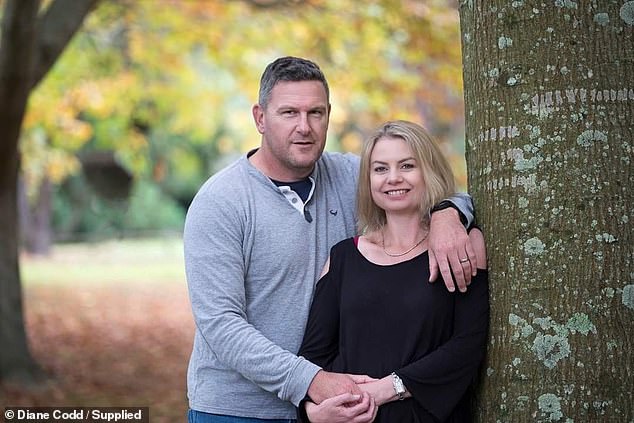 The 45-year-old (pictured with her husband Adam) said she began experiencing tiredness, nausea and a loss of appetite but she just put it down to having a ‘busy life’. Just 18 months later, she was told she has incurable cancer

What are the symptoms of lung cancer?

The warning signs of lung cancer are:

Anyone who’s diagnosed with lung cancer may also have experienced symptoms such as fatigue, weight loss, hoarse voice, wheezing, difficulty swallowing, and abdominal or joint pain

‘I felt angry that it had got to this point without being identified sooner,’ Ms Codd told Daily Mail Australia.

‘It was a huge shock, horror and disbelief. I have no cancer in my family, I am young, healthy and a non-smoker.

‘I didn’t know anything about lung cancer and didn’t know how I could possibly have it. It truly shattered us and we still feel utter disbelief on many days.

‘But I was desperately sad for my husband and son, I never wanted them to have to go through something like this.’

Like any health-conscious woman, the mother said she was very ‘fit, active and healthy’ before the shock diagnosis.

‘I have never had any health issues and I hadn’t even suffered from the normal winter colds or flu,’ she said.

‘I attended regular boot camp sessions and walked our dogs daily. I don’t even drink alcohol apart from the odd glass when celebrating a special occasion.

‘I work within the beauty field as a programme leader and lecturer, so health and wellbeing is really important.’ 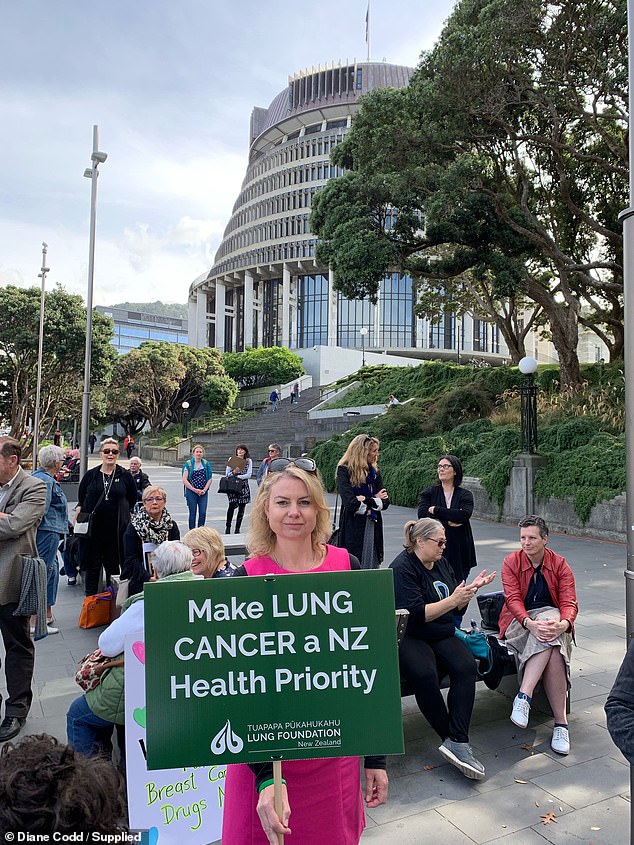 Far from getting better, the mother returned to see a doctor after she developed a ‘nagging, irritating cough’ that wouldn’t go away

In mid-2017, her right shoulder started causing her discomfort.

‘If there was any area where I felt “stress” ever, it was my shoulder and I have always been a fan of holistic treatments – massage, chiropractic treatment but these began to feel ineffective,’ she said.

She said she started to struggle with doing the simple daily tasks.

‘I went to see my GP to see what could be done as every little thing seemed to aggravate my shoulder – vacuuming the house, lifting and holding things,’ she said.

If there was any area where I felt “stress” ever, it was my shoulder

‘I just couldn’t seem to ever feel comfortable. I was always aware of my uncomfortable shoulder whether standing, sitting at my desk or trying to sleep at night.

‘Housework became challenging, with my husband doing more that he used to, lifting heavier items and playing games with my son.

‘All slowly but surely became more challenging. And the less I used the right shoulder, the more the muscles in this area weakened.’

Far from getting better, the mother returned to see a doctor after she developed a ‘nagging, irritating cough’ that wouldn’t go away. 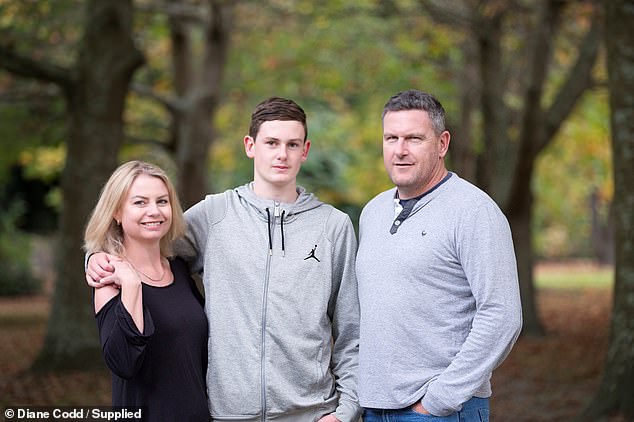 By telling her story, Ms Codd said she wanted to share the warning signs of lung cancer as she believed a simple chest X-ray could have prevent her from getting stage four of the disease

But after getting an X-ray, Ms Codd was left distraught after being was told she had incurable cancer.

‘If I hadn’t developed the cough, I would not have been diagnosed,’ she said.

‘I experienced tiredness, nausea and a loss of appetite but I put it down to having a busy life. I did raise these concerns with the doctor but they weren’t linked to be able to think that it could have been due to the lung cancer.

‘I only had the eventual cough but the shoulder pain was the one constant for me.’

If I could go back in time, I would have pushed for answers. I would have believed in myself and followed my gut instinct in realising the pain was real, not just in my head… a simple chest X-ray could have saved my life

Ms Codd said if she could turn back the clock, she would have ‘pushed for answers’.

‘My pain eventually spread to my right side and into my chest with deep breathing. I would have insisted on having a chest X-ray due to the chest pain,’ she said.

‘If someone had even hinted at a lung problem, I would have investigated further. I would have believed in myself and followed my gut instinct in realising the pain was real, not just in my head.’

The cancer-stricken mother has started undergoing a new targeted therapy drug called Tagrisso – but the treatment will set her back NZD$11,000 per month.

‘I’m being really optimistic that this is going to work and bring about incredible results. I’ll possibly get brain radiation if the Tagrisso doesn’t shrink the tumours. Hip radiation is planned for next month,’ she said. 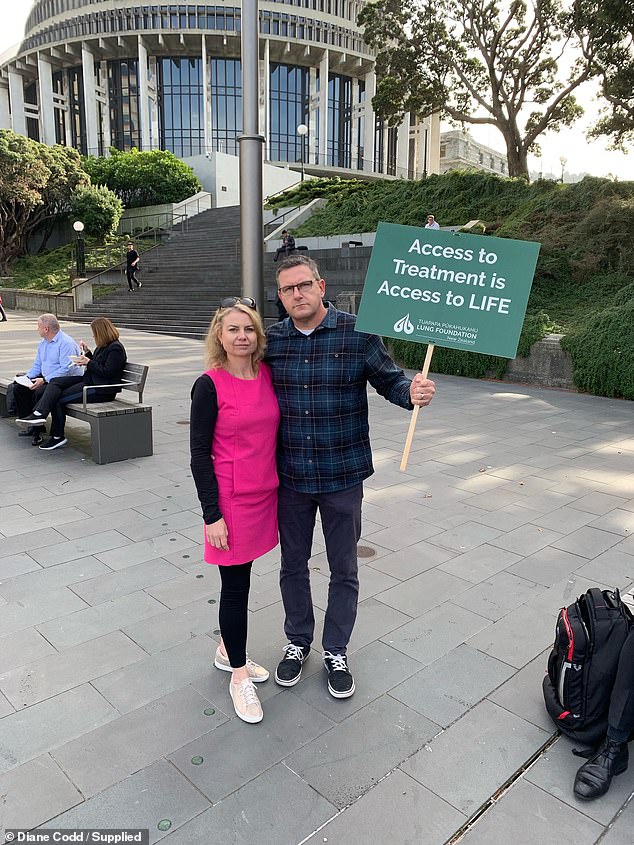 In May this year, Ms Codd and her husband Adam marched to Parliament to present petitions for the funding of cancer treatments

Kind family, friends and strangers have rallied behind the mother to set up a GiveALittle fundraising page to help her raise money for her medical expenses.

‘People have been absolutely amazing and we have been overwhelmed with the support and generosity,’ she said.

‘As it is, I am still working full-time and have been fortunate enough to have a very understanding workplace but I don’t know how long I can sustain this for.’

By telling her story, Ms Codd said she wanted to share the warning signs as she believed a ‘simple chest X-ray’ could have prevented her from getting stage four lung cancer.

‘If diagnosed at stage one, a surgery to remove the cancer can be done and a full recovery could have been possible,’ Ms Codd – who’s now the advocate for the Lung Foundation NZ – said.

I just want the opportunity to see my 14-year-old son grow up and share his life – and if life permits, I want to grow old with my husband

‘I have been astounded by the number of people I have come into contact with who are my age and younger and have never smoked. It is truly heartbreaking.

‘Lung cancer doesn’t receive as much exposure or funding as other types and this means that people are unaware of the signs and symptoms.

‘Always listen to your body and trust your gut instinct and don’t back down if you believe something is wrong. I was too nice and a pushover. It didn’t get me anywhere.

‘I am remaining positive and I feel blessed every minute of every day by the wonderful people around us who have shown us their love and support in so many different ways. This alone makes me feel like the luckiest person.

‘Now I just want the opportunity to see my 14-year-old son grow up and share his life – and if life permits, I want to grow old with my husband.’