Leonardo DiCaprio revealed discussions during a meeting with Donald Trump about climate change.

The actor and activist expressed his disappointment after the president didn’t appear to follow through on their discussions of potential courses of action during Yale’s Climate Conference at the school’s New Haven campus.

‘We presented him with a comprehensive plan to tackle climate change, while also simultaneously harnessing the economic potential of green jobs,’ DiCaprio recalled Wednesday.

‘We talked about how the United States has the potential to lead the world in clean-energy manufacturing and research and development,’ he noted according to the Hartford Courant. 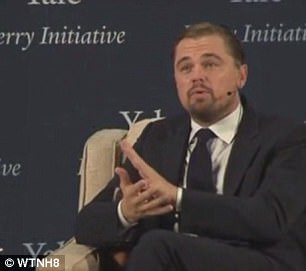 However, DiCaprio’s efforts appear to have fallen on deaf ears.

Since Trump took office he has taken regressive actions on climate change and the environment, including pulling the United States out of the Paris Climate Agreement which focuses on reducing greenhouse gas emissions.

DiCaprio lashed out pointedly at the administration. ‘This utter lack of leadership by officials who prefer to preserve their short-term political power rather than ensuring the livable future on our planet means that we all must do more now than any other time in human history.’

DiCaprio also drew the correlation to global warming and the recent hurricanes that have struck the US with devastating effects.

‘Yet with all this evidence, this clear evidence from the scientific community and the mounting economic price tag, there is still an astounding level of willful ignorance and inaction from the people who should be doing the most to protect us and every other living thing on this planet,’ he said.

DiCaprio has been heavily involved in climate change activism since 1998, directing most of his philanthropy toward that cause.

The speech was part of a two day conference put on by the Kerry Initiative hosted with the former Secretary of State host John Kerry.

DiCaprio was on stage in a talk back style presentation with Kerry.

Kerry cracked the Titanic star was an appropriate host for the event.  ‘Who better to talk about climate change,’ he asked, ‘than a man who has witnessed an iceberg breaking apart in the middle of the ocean?’

‘I still believe that the United States has the potential to lead the world on this issue,’ he added. ‘We can only hope that the president begins to see it to, before it is too late for all of us,’ DiCaprio concluded.