Dick and Angel Strawbridge have spent the past five years transforming the imposing Chateau-de-la-Motte Husson in the Pays de la Loire region of France from a dilapidated pile into a family home and a thriving wedding and holiday venue – a journey that’s captivated viewers in Channel 4’s Escape To The Chateau series.

Now they’ve detailed the rollercoaster ride in a new book – A Year At The Chateau – which describes how they moved into the 45-room 18th-century building with their children Dorothy and Arthur, then one and two, and the monumental effort that went into readying the place in just nine months for their own wedding the following autumn.

‘We decided to write about our first extraordinary year here,’ says Dick, 61. ‘It was very special. It was just the two of us sitting down, talking and writing. But we couldn’t agree on a lot of things that had happened, so we ended up going back to our emails of the time.

‘Getting an electrician was like extracting teeth, and we didn’t have proper lights for two and a half years, let alone proper heating. The first night I spent in the chateau it was -7°. I don’t think I ever saw Angel without her coat on for the first couple of months.’

‘Woolly socks and jumpers aren’t stylish enough for me,’ laughs Angel, 42. ‘But the priority was getting the lights done in the honeymoon suite, because that was going to bring us money in from the weddings. So, honestly, when we got our first light switch two and a half years later, just turning it on was brilliant.

‘Writing the book together brought up a lot of emotions and surprises for both of us. For example, it was good to read that Dick admitted my idea to create a hole in the wall to make the honeymoon suite bigger was a good thing. And it sounds funny, but we’d never even talked about the first time Dick saw me on our wedding day. So when I read what he wrote – about how beautiful I was and how lucky he was – I was just in pieces.’

As well as weddings, the couple also offer glamping holidays and pampering days, and now fans can read in dramatic detail how it all began. ‘I’ll never ever get tired of turning around at the end of the drive,’ says Angel. ‘That’s always the instant when I lose my breath a little bit and think, “Wow!” It was a love-at-first-sight moment – just like meeting Dick.’ 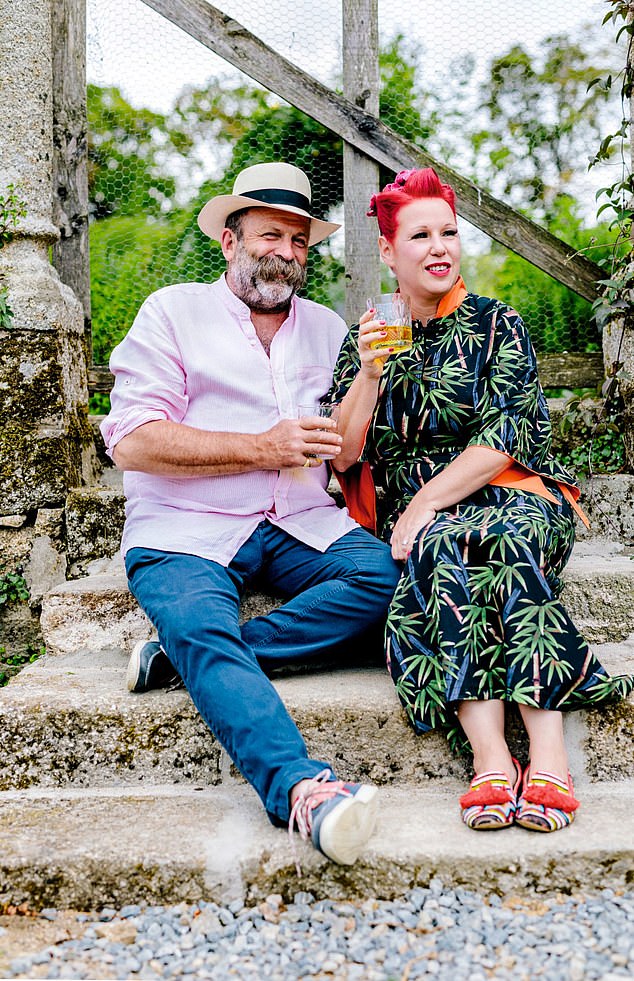 HOW OUR FABULOUS FRENCH ODYSSEY BEGAN…

Angel We were on holiday in the South of France in 2012, and we had been together two years. But Dick was living in Cornwall and I was in east London. Relationships are tricky at the best of times, and all the more with 300 miles between you, so we were on a mission to find somewhere we would both want to call home.

Dick We stayed in a gîte and, having stocked up on wine, foie gras, cheese and other delicacies, we cuddled up on the sofa in front of the fire watching A Good Year, a romantic comedy with Russell Crowe. It’s about a city worker who inherits a rundown chateau and ends up forsaking his busy life for an idyllic existence. It’s fair to say it got us thinking.

Angel Once we returned to Britain, our search for the perfect chateau to call home began to take up part of every day. Every day I would send Dick a list of ten possible properties, but in my heart I knew we hadn’t yet found the one that ticked all the boxes. There were many disappointments before we found ‘the one’.

Dick We were having breakfast in a hotel near Limoges when an email arrived that gave both of us goose pimples. An estate agent had sent us the details of a chateau that was about to go on the market. The pictures alone made us catch our breaths, it looked exactly what we had dreamt of. If not better. On 9 October, 2014, we met Chateau-de-la-Motte Husson, and it was love at first sight.

Angel The village definitely fell into the idyllic category. It was small and very friendly. Tick. There was a charming town hall with an abundance of flowers outside. Tick. A bakery, a convenience store, two hairdressers, two banks, a restaurant, a tobacconist’s, a primary school and rather grand church, a florist and a beauty salon. Tick, tick and tick.

And then came the unforgettable moment when we gasped in astonishment as we saw the Chateau-de-la-Motte Husson for the very first time. The forest of trees on the left and right of the driveway were gorgeous. The standalone 1920s orangery was as glorious as it was in the pictures. I remember thinking nothing is ever as good in real life, but this was better. Then we were there: the front door. And what a front door it was!

Dick We had to pause and breathe so we could take in the high ceilings, the stonework, the huge doors into the rooms and the amazing double staircase. It was dark and smelt musty and the peeling wallpaper was very busy but wonderfully original. We galloped around the rest of the chateau to confirm there were no walls missing or major disasters. We did it in a blur as we knew this was right and we had to get down to business. Within 20 minutes we had made an offer.

Angel Our plans had always revolved around finding a dream home that worked as a wedding venue. I love, love, love hosting weddings. I know I’m good at it, but who would not want to host an event that is full of joy? We stood together in that moment, holding hands in silence, and it felt like we were watching this house become our home. 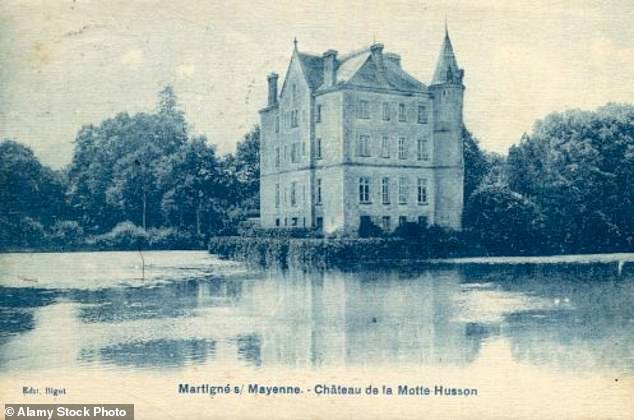 Dick For our heating to even think about working we needed to start by lining three of our chimneys with long, heavy, stainless steel flue liners. We called in a local builder who was recommended to us – Pascale, our whistling roofer. He came through the entrance hall with a lit Gauloise cigarette dangling from his mouth. Before we could say anything he had disappeared up the stairs, exited through a window in the roof and began walking along the apex of the roof, whistling. It was freezing and the roof still had ice on it but this didn’t bother Pascale – he just sat on a chimney stack, dropped down a weighted rope and then proceeded to pull up the liner as it was being pushed up by his colleague.

Angel At this stage, we hadn’t fully moved in. For one thing, we didn’t have a working bathroom – but we had lots of bits. In an outbuilding, we corralled the various bits of bathroom equipment we had found around the chateau, which included a lovely Art Deco sink. The glaze had sadly been stained but the taps were lovely, though we had no idea if they worked. On the evening of 28 February, 2015, we finally moved in. I was so happy to finally be in our forever home. The fun was about to begin.

Dick On the day we exchanged contracts, the previous owner Jacques was about to clear out the attic and the outbuildings, and make a big bonfire of everything left behind over the generations. He seemed quite happy when we told him we’d do it for him. Over the next few months it became clear that we had averted a disaster. Numerous items of furniture had migrated the five floors up to the attic: bed frames, day beds, huge wardrobes, a side saddle, collections of magazines and books, pictures, Victorian clothing, even the remains of French muskets that could have dated back to before the battle of Waterloo. There was also the most incredible vintage wallpaper collection that would later find a new life throughout the chateau.

Angel I am not the bravest when it comes to wild animals and spiders, and one particular hot day in August, as we removed one of the spongy parts of the panelling from the tower of the honeymoon suite, the room filled with a cloud of flapping bats. Dick says I screamed, and though I’d like to pretend I didn’t, it’s probably true. All I could think of was what if they got caught in my hair? Though I love him, Dick’s laughter did not help at all. We managed to film a bit of the magic on our phones and then, almost as quickly as it had happened, they all seemed to disappear out of the open windows. 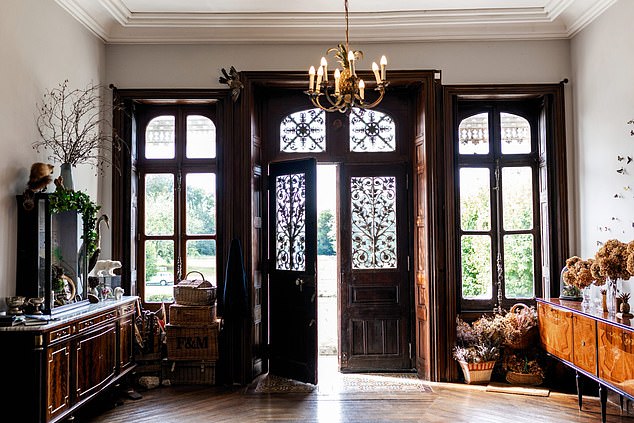 Dick Angel had stated categorically – and over several occasions, m’lud – that she did not want a big wedding, just something intimate with our parents followed by a glorious honeymoon. To coin a phrase from my youth, ‘You little fibber!’

Angel I’m just not a wedding dress sort of girl. I’d spent most of the last nine months in a denim boiler suit but I decided that was not a good look for the big day. So I took myself up to the old servants’ quarters, a room with lots of cupboards full of our posh clothes which we no longer wore. When I pulled out the 1940s wiggle dress that I was wearing when I met Dick for the first time, I got goosebumps. My idea was to have this dress remade in a white silk. It was perfect. I felt the weight falling off my shoulders.

Dick The best part of planning the big occasion was getting to fill our wine cellar. The cave was lined with the most robust and authentic racks with space for about 10,000 bottles. It would take some filling.

Angel We had 200 guests coming, but it was when Dick’s family arrived that I felt our wedding had really started. Linda, Deanna and Bunny, Dick’s sisters, all stood back and looked up. Then Dick’s mum Jenny put her hands on her hips and smiled. Dick and I watched them and then, for the first time in months, we properly looked up too. We were seeing the chateau through fresh eyes. 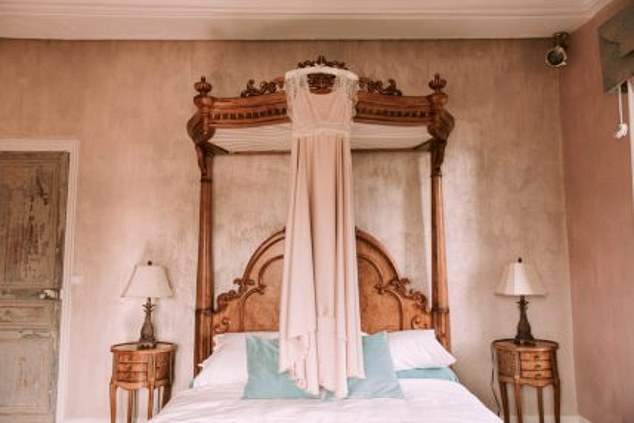 Dick Since we moved in, I had been worried about the entrance hall. It was in a seriously dodgy condition, flexing several inches when I walked on it. I did a temporary fix, but it was tested in a way I’d never anticipated.

Angel The band had set up on the landing of the staircase and our first dance was announced. Our family danced together, Dick with Dorothy and me with Arthur, then all of us together. It was perfect. After a couple of moments everyone was in the entrance hall dancing, singing.

Dick Our first dance was lovely but it wasn’t long before we had masses, and I mean masses, of people dancing on the ornate floor. It didn’t even occur to them that they might end up in the basement. There was definite movement in the planks. ‘What’s the worst thing that could happen?’ I asked myself. Sometimes you just have to throw caution to the wind… and keep dancing.