Boris has had a haircut. A half-hols chop. One of those twerpish ones which make you dread going back to school and facing your mates.

I’m not sure who his crimper is these days but, judging by the severity of his fringe, it’s possible Carrie simply placed a bowl over his head and attacked it with a pair of secateurs.

Andrew Marr charitably didn’t ask him about it while interviewing him yesterday, possibly because the Prime Minister might have quizzed him about his own peculiarly tinged locks.

Speaking of colour, there is a rather greyish hue here in Manchester. Grey skies, grey weather. Even Marr’s studio had a granite tinge to it. It felt like we were watching a flashback scene in a movie.

The PM was perched upright, palms on thighs as though posing for his rugger team photo. He was very keen to talk about the hospitals his government plans to build.

Not so fast, said Marr. First of all he wished to discuss those ‘humbug’ remarks Boris had made in the house last week to Labour MP Paula Sherriff when she accused him of using inflammatory language.

The Prime Minister said it had all been a big misunderstanding. The humbug, he explained, was aimed at Sherriff’s criticism of his use of the term ‘Surrender Bill’ which he uses to describe the so-called Benn Act, which forbids us leaving the EU without a deal on October 31.

He certainly wasn’t surrendering on the ‘Surrender Act’, by the way. He carried on repeating it half a dozen times.

Marr had certainly had his Ready Brek. He was on the edge of his seat, poised to dart, ferret-like, into any gap between the PM’s sentences. Past experience has taught him how important it is to keep Boris reined in. Give him any yardage and he charges off like a bronco bull.

Don’t you think, said Marr, it’s time you told everyone to just calm down?

‘I think I’ve been a model of restraint,’ Boris guffawed. 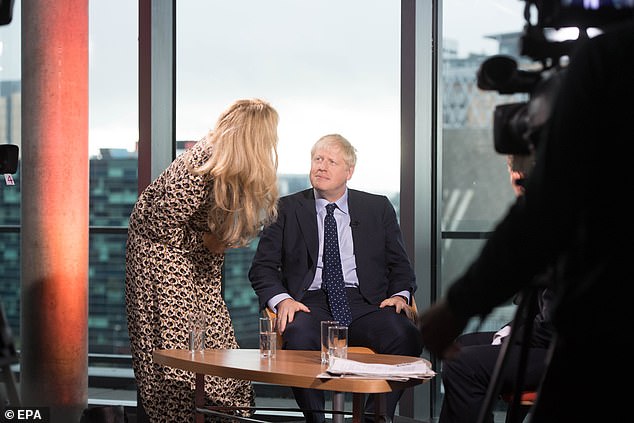 Marr suggested he had no chance of uniting the country. The PM huffily puffed his cheeks out. ‘We’re building 40 new hospitals!’ he yelled. The broadcaster promised they’d get to those eventually.

Boris took a swig of water. A flicker in his eyeballs suggested mild disappointment that it wasn’t a Stolichnaya and soda.

There would be no deal with Nigel Farage’s Brexit Party, he insisted. ‘The Conservatives don’t do deals with other parties.’

Marr might have asked what the recent coalition was all about, but let it slide.

‘We’re about to announce the biggest investment in…’ Hang on! Can we still leave the EU without a deal? ‘Of course we can!’ the PM harrumphed. He wasn’t telling us how, though.

Marr asked him if he’d spoken to any other EU heads of state to help him out by vetoing an extension. Boris wasn’t go to go into that. ‘Ah,’ said Marr coming across all Sherlock Holmesy. ‘So you might have done!’ Old lobby hack trick, that. Seizing upon a non-denial.

Again, Boris tried to drag the conversation into his investment plans for hospitals and ‘gigabit broadband’, whatever that is.

The way he kept saying ‘gigabit’ suggested he hadn’t a clue what it meant either. Perhaps he wasn’t concentrating in those technology lessons he was so fond of. 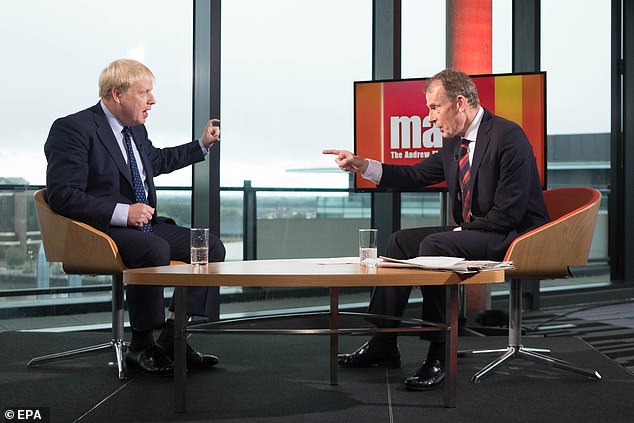 ‘Marr (right) had certainly had his Ready Brek. He was on the edge of his seat, poised to dart, ferret-like, into any gap between the PM’s sentences’

Which brings us to Jennifer Arcuri. Marr said he had to ask him about the honey blonde to whose business Boris gave a grant while Mayor of London. That I-have-to-ask framing suggested Marr was on uncomfy ground.

‘I’m not going to be prurient,’ he assured his guest. Bo-ring! Boris led his host up a blind alley and, somehow, managed to end up ridiculing his successor, Sadiq Khan.

By now we were short on time. And finally, we got to those hospitals.

Marr suggested the problem was NHS staffing numbers, not shiny new buildings. Boris, unable to stay focused, managed to divert this into a rant about Labour’s recent conference.

‘This is the Tory party conference!’ complained Marr, yanking the Bronco back in line. Indeed it is – and the PM desperately needs a good one.

At least this week couldn’t be any worse than the last one. Could it?