Covid testing did not cost No10 £2billion a month, health chiefs have admitted in a document sneaked out earlier this month.

Unveiling his blueprint for living with the virus, Boris Johnson told MPs in February that the Test and Trace programme cost that amount ‘in January alone’ at the height of the Omicron wave.

UK Health Security Agency (UKHSA) bosses now say the figure quoted by the Prime Minister was just a ‘volatile’ estimate and ‘may not reflect the true expenditure’.

Senior officials then wrongly portrayed the £2bn as the monthly cost, with Business Minister Paul Scully saying on LBC the day after the PM’s statement that the country could not bear the ongoing testing bill.

‘The PM was right when he said yesterday that we clearly can’t go on forever paying £2billion a month for the testing regime,’ he said.

‘You could only imagine what other things that money may be spent on.’

There were calls from business leaders, Tory MPs and experts for the Government to scale back its testing programme in the run-up to Mr Johnson’s ‘Freedom Day’ announcement.

Yet many scientists questioned the decision to scrap free mass testing from April 1, saying the move was premature and that swabbing was essential to keep tabs on any future flare-ups and help curb the spread of Covid.

MPs said the UKHSA document, published on March 3 during Russia’s invasion of Ukraine, raises questions about the Government’s decision to axe free swabs.

Liberal Democrat MP Layla Moran, who chairs the All-Party Parliamentary Group on Coronavirus, told MailOnline: ‘If the financial justification ministers have used for dropping free testing is inaccurate, it exposes this was an ideological decision driven by a PM desperate to change headlines.’

Scrapping free testing will ‘deepen the divide’ between those who can afford to self-isolate and pay for tests and those who couldn’t, she added.

A PCR test can cost upwards of £180 per person, with the swab needing to be processed in a lab.

The UK, on the other hand, favours faster tests which are not lab based and give a result within 15 minutes.

These rapid coronavirus tests, known as lateral flow tests, are ones that can be done on the spot using portable equipment.

They are faster and cheaper than lab-based PCR tests, which the government uses to diagnose people, but are less accurate.

Mr Johnson’s announcement on testing and dropping restrictions came as he faced intense pressure following a series of revelations about lockdown-busting parties in No10.

It was widely seen as a political move to appease libertarian backbench Tory MPs who opposed Covid restrictions in an attempt to avoid a flurry of no confidence votes.

Critics said scrapping free testing and scaling down other Covid surveillance programmes was like ‘turning off the headlights at the first sign of dawn’.

Professor Stephen Reicher, a psychologist at St Andrews University and Government adviser, told the Guardian: ‘You can’t see what’s coming and you don’t know when it makes sense to turn them on again.’

The UKHSA document emphasises the January cost figure was ‘an interim, unaudited forecast made in December 2021, based on internal Omicron assessments’.

‘The main drivers of this estimation were an increased demand for rapid lateral flow and PCR tests, with the associated logistics costs,’ it said.

It also highlights that since the estimate was made, the Government announced a number of changes that would impact financial forecasts.

These include the scrapping of confirmatory PCR tests for asymptomatic cases and reducing the period people need to self-isolate for, both of which would reduce test demand.

UKHSA bosses said the actual cost of Test and Trace operations for January will only be published at the start of 2023.

The forecast also said the estimate for the full 2021/22 yearly spend was £15.7billion, which would amount to the equivalent of around £1.3billion per month. 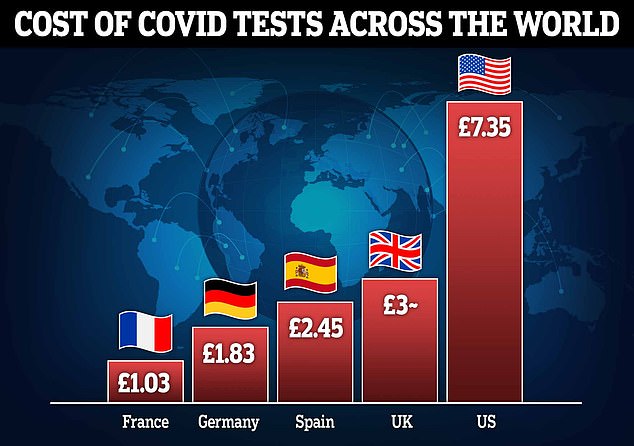 In France, people can pick up tests at a third of the UK price (around £3), for as little as £1, while in Germany they can cost just £1.80 and Spain’s Government has capped them at roughly £2.45. However, the tests – which experts say can cost just pennies to make – are not as cheap everywhere, with Americans paying $10 (£7.35)

Rise in Covid cases was EXPECTED after No10 dropped final restrictions in England, Sajid Javid says

A surge in Covid cases was always to be ‘expected’ following the easing of England’s final Covid restrictions, the Health Secretary insisted today as he urged caution over the rising statistics.

Sajid Javid said the UK remains in a ‘very good position’ — despite hospital admissions also starting to creep up in the last week — but he urged adults eligible for a booster vaccine to come forward and get the jab.

Mr Javid told Sky News: ‘Whilst the rate [of cases] has gone up modestly in the last few days, that’s to be expected as we are now open as a country and there’s more social mixing, but there’s nothing in the data at this point in time that gives us any cause for concern.’

He insisted that officials were continuing to monitor case numbers, hospital admissions and NHS capacity, telling Times Radio: ‘Taking all of that together, we remain in an overall very good position.’

But the Office for National Statistics (ONS) Covid Infection Survey estimates infections were starting to climb days before, suggesting the transition towards ‘living with Covid’ is not solely to blame for the latest surge.

The most up-to-date NHS data shows there were 1,459 virus admissions across the UK on March 7, the eighth day in a row they rose week-on-week. In a concerning sign, admissions in over-85s have jumped by a quarter in a week.

However, the Adam Smith think-tank told MailOnline that even the lower figure was not justifiable.

‘Free Covid testing is not free, but a significant burden on the taxpayer,’ said James Lawson, from the ASI.

‘Having protected our society with vaccines and better treatments, we need to return to normality, including reprioritising other health issues like cancer screenings.

‘Regardless of the precise testing bill, it needs to be put in perspective. We’re spending more on Covid tests than running the entire Ministry of Justice or Foreign Office.’

Last month a report by the research charity Collateral Global and academics at Oxford University concluded the UK’s testing programme was ‘chaotic and wasteful’.

This is not the first time questions have been raised about the £2billion per month figure, with SAGE scientists telling MPs earlier this month that scrapping free lateral flow tests for Britons was wrong.

They said the more accurate but expensive PCR tests, which need to be processed by a lab, are believed to account for a large portion of the testing bill.

Professor John Edmunds, who is also an infectious disease modelling expert from the London School of Hygiene and Tropical Medicine, said PCR testing at the height of the Omicron wave cost £20million per day.

PCR tests cost about £33 a head, and this before being potentially sequenced as part of Covid variant monitoring which can add an additional £60-£100.

In comparison quick and easy lateral flow tests, which can be done at home, cost about £3 per test.

Scientists have argued the Government should keep free lateral flow testing to help avoid Covid infectious people coming into the contact with the clinically vulnerable.

Cost has been cited as the main reason for scrapping free testing as Mr Johnson told MPs in the House of Commons in February.

‘The Testing, Tracing and Isolation budget in 2020-21 exceeded the entire budget of the Home Office,’ he said.

‘It cost a further £15.7billion in this financial year, and £2billion in January alone at the height of the Omicron wave. We must now scale this back.’

From April 1, most Brits will have to buy lateral flow tests from high street pharmacies where they will cost in the region of £2 per test.

The tests, which can cost pennies to produce, were a crucial component of how the UK battled through the Omicron wave, with experts and minsters urging people to take them before going out to meet other people.

Scrapping free testing next month is the final part of the Government’s ‘living with Covid’ transition that saw all legally binding virus restrictions dropped last month.

On February 24 even the most fundamental rules such as having to self-isolate after testing positive were abandoned.

But there are signs the outbreak across the country is starting to grow on the back of the move — with daily cases up 50 per cent on average since Freedom Day.

Hospital admissions have also started to creep up in the past week, with the rates in over-65s increasing by a quarter in that time.

But Health Secretary Sajid Javid today insisted that a surge in Covid cases was always to be ‘expected’ following the easing of restrictions.

Mr Javid told Sky News: ‘Whilst the rate [of cases] has gone up modestly in the last few days, that’s to be expected as we are now open as a country and there’s more social mixing, but there’s nothing in the data at this point in time that gives us any cause for concern.’

He insisted that officials were continuing to monitor case numbers, hospital admissions and NHS capacity, telling Times Radio: ‘Taking all of that together, we remain in an overall very good position.’