Did Elton John’s mother poison him against the father he loathed?

Rock stars and unhappy childhoods go together like cocaine and rolled-up £50 notes. It’s something most of my biographical subjects have had in common, from John Lennon to Eric Clapton and Jimi Hendrix.

So when I came to write Sir Elton John’s unauthorised biography, I didn’t question too hard his bleak back story of a sensitive only child, baptised Reginald Dwight, and a domineering dad serving as a flight lieutenant in the Royal Air Force, who – he believed – never really loved or understood him. That early misery and enduring insecurity, so the story goes, gave Elton his drive to succeed and the insatiable need to be loved by an audience. But it also left psychological scars that wealth and fame could never erase.

All this is laid bare in the trailer to his new eagerly awaited biopic, Rocketman, which has been co-produced by Sir Elton and his husband, David Furnish, and is said to be a ‘warts and all’ portrait of the complex, often troubled character whose record sales exceed 300 million and whose concerts still draw ecstatic crowds all over the world.

Elton with his mother Sheila and stepfather Fred in 1971. ‘Rock stars and unhappy childhoods go together like cocaine and rolled-up £50 notes,’ writes Philip Norman

In the film, the young Reg is seen describing himself as a ‘fat boy from nowhere’, before being advised by a black American musician: ‘You got to kill the person you were born to be in order to become the person you want to be.’

How much of glossy biopics are actually true has always been open to debate, but this is a lesson young Master Dwight clearly learned early and well. By Sir Elton’s own embittered account, his father Stanley Dwight’s coldness dated back to his birth in 1947, while Stanley was stationed overseas. ‘I was two years old when he came home. Mother said, “Do you want to see [Reggie]?” He said, “No, I’ll wait till morning.” He’d been in Aden or somewhere… not seeing me be born or anything.’

He later said: ‘My father was so stupid with me it was ridiculous. It was just pure hatred. You know, he never saw me for two years. I was two years old when he came home from the Air Force.’

Reggie’s parents soon divorced, with custody granted to his doting mother, Sheila. But Stanley remained a baleful presence into his teenage years, as he said, making him feel he could never do anything right.

‘When they [his parents] divorced, I did feel bitter because of the way my mum was treated. She had to bear all the costs.

‘Then he went away and five months later got married to this woman and had four kids in four years. My pride was really snipped, ’cause he was supposed to hate kids. I guess I was a mistake in the first place.’ 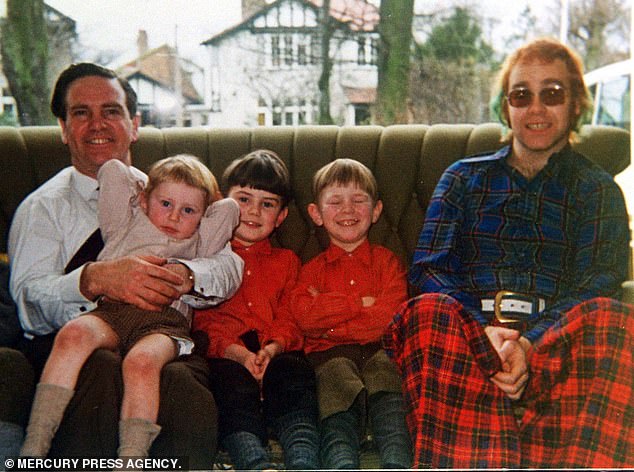 From left: Stanley Dwight with sons Michael, Robert, Geoff and Elton in 1973

One of his lasting grudges against his father was not being allowed a pair of Hush Puppies suede boots because they were ‘too way out’. It was in reaction to this that the Seventies megastar would wear five-inch-high platform heels, dye his hair fluorescent green or orange and pound his piano dragged up as Mae West, Mozart or Ronald McDonald.

It also supposedly explained why, for so many years, the megastar invested more love in inanimate objects than human beings, accumulating vast collections of records, clothes, houses, cars and artworks and never shopping at Cartier the jeweller without a supermarket trolley.

There’s only one problem with this compelling version of why Sir Elton John has always ranked so highly in the catalogue of superlative performers from broken or dysfunctional homes: it’s a fantastic work of fiction.

While I was researching my biography, Elton was undergoing multiple detoxification and so unavailable to be interviewed. However, I had the co-operation of his lyric-writer, Bernie Taupin, who provided delicious detail about their indecently effortless collaboration and (totally platonic) friendship.

As time went on, Bernie would relay a question to Sir Elton for me and an answer would come back, so in the end I felt kind of authorised. Then, a few days after the book was published, my office phone rang and a voice said, ‘Philip… this is Elton.’ I wish I’d had the nerve to reply, ‘Elton who?’ 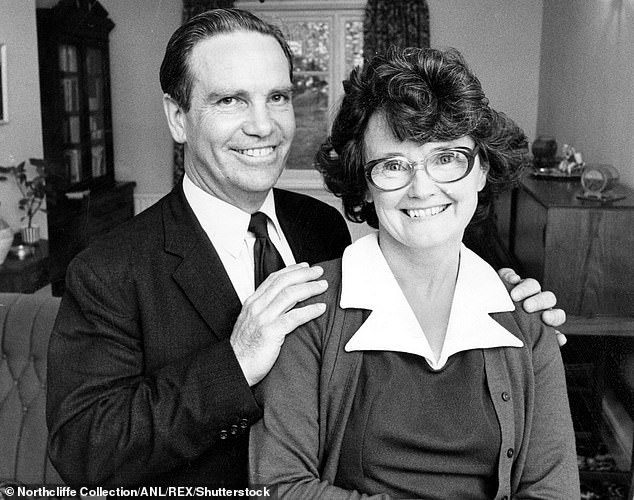 Stanley Dwight in 1976 with his second wife, Edna. ‘Despite his first-born’s many accusations of coldness and indifference, Stanley had always maintained a dignified silence’

He was reading the book, he told me, and considered it ‘pretty accurate’, so would I like to go to his west London home for tea the following afternoon?

When we met over Earl Grey and chocolate cake, he scarcely bothered with small talk, but instead virtually dictated a postscript chapter about his rehab for the paperback edition. Subsequently, in an interview with Sky News, he said my biography had got him ‘spot on’.

However, on the subject of Sir Elton’s father, Stanley Dwight, it hadn’t been spot on at all. A few months later, out of the blue, I received a letter from Stanley’s second wife Edna, with whom he’d gone on to have four more sons.

Despite his first-born’s many accusations of coldness and indifference, Stanley had always maintained a dignified silence. Now he had recently died, aged only 66, and Edna wanted me to set the record straight. In their modest Cheshire bungalow, she brought out letters, diaries and photographs contradicting every one of Sir Elton’s long-held beliefs about his father, clearly fostered by his mother, Sheila, in the bitterness following their divorce.

Stanley, it turned out, had not been serving abroad with the RAF when the former Reggie was born, so missing his babyhood. He’d been on a home posting at the time, and registered his son’s birth the day after it happened.

Sheila and little Reggie could have accompanied him overseas, but Sheila always refused because she found other officers’ wives ‘snobby’. Far from being indifferent to Reggie, Stanley missed him terribly, always kept a photograph of him beside his bed and wrote home asking for news about him nearly every day. Stanley himself had once been a musician – playing trumpet in various professional dance bands – and was immensely proud when Reggie won a scholarship to the Royal Academy of Music, seemingly destined for a career as a concert pianist. 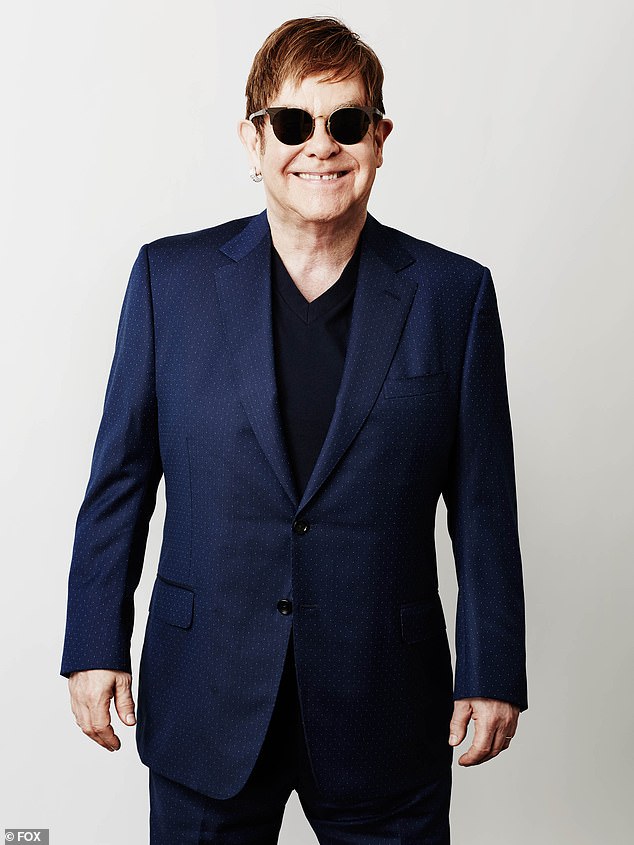 Last Christmas, the nation’s heart melted when John Lewis’s seasonal TV ad showed a child actor as Reggie, excitedly tearing the gift-wrappings from his very first piano, watched by his proud mum and grandma. In reality, it was his father who bought him the piano. Edna Dwight showed me the £68 receipt for the ‘second-hand upright pianoforte by Collingwood, walnut finish’.

And what of Stanley’s stuffy dress code that supposedly forbade the teenage Reggie even the mildly nonconformist suede boots that all his friends wore – and gave rise to the future Elton’s wild wardrobe? His stepmother showed me evidence that his father had opened an account at a London outfitter’s where he could buy himself whatever he wanted. And there in the family album was a snapshot of him wearing the Hush Puppies he always claimed to have been denied.

In the first flush of superstardom, he seemed to reach out to Stanley, Edna and his four young half-brothers, arranging front-row seats for them at his shows, playing football in the garden with the boys, even buying Stanley – who never asked anything from him – a new Peugeot to replace his beaten-up Mini. Then, with no explanation, the shutter came clanging down.

Now 72 and the father of two sons, Sir Elton is gearing up for a burst of attention rivalling any in his giant-spectacled glam rock heyday. Few music biopics have been more eagerly awaited than Rocketman, the story of his super-powered rise to fame, with the young Welsh actor Taron Egerton in the title role.

The stakes are high for a performer whose fame, wealth and honours somehow never seem enough. For it re-ignites a duel, fought on many stages during the Seventies and Eighties, over which British rock act was the more flamboyant and outrageous. Sir Elton will be only too keenly aware that Rocketman follows directly after the mammoth success of Bohemian Rhapsody, the Queen biopic that has grossed £700 million worldwide and won four Oscars. And there’s another, more personal reason why Sir Elton is willing Rocketman to soar even higher than Bohemian Rhapsody. His former manager and lover, John Reid – from whom he parted in 1998, accusing Reid of major financial irregularities – also used to manage Queen.

I have no such vested interest. The film’s makers purchased no rights in my biography nor enlisted my help in their background research. There’s little copyright protection for works of nonfiction, so I’m resigned to seeing – shall we say – a certain amount of my book up there on the screen. The trailer alone includes two moments that were revelations when I published them.

The first was how Sir Elton wrote Your Song in minutes at his mum’s maisonette in Pinner after Bernie Taupin had jotted down the words at the breakfast table; the second was how he once tried to drown himself in a swimming pool in front of his whole family, including his grandmother.

But one further revelation, evidently, is left out of the film: that Stanley Dwight was not the aloof, repressive parent his famous son has always portrayed, but the complete opposite. For Sir Elton, where his father is concerned, sorry really does seem to be the hardest word. 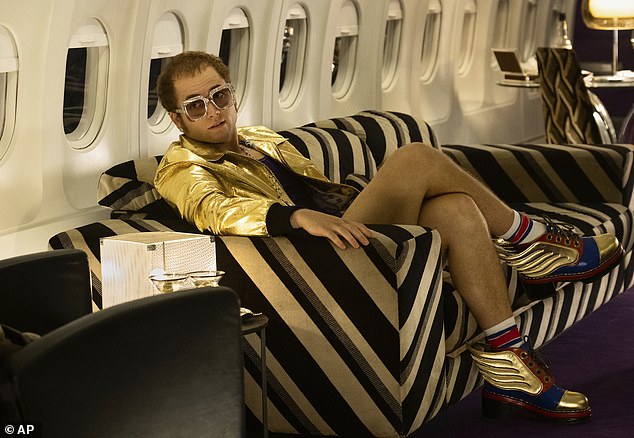 Taron Egerton as Elton John in a scene from the new biopic, Rocketman

Stanley died in 1991 after years of ill-health. Sir Elton said he’d made his peace with his father but declined to attend the funeral on the grounds that it would be ‘hypocritical’.

In the end, no one was to be exempt from that clanging shutter, not even his mother, Sheila, his tireless champion throughout the early years when he was struggling to make it as a session musician and back-up vocalist.

After he met David Furnish, a rift opened up between mother and son that apparently lasted until shortly before Sheila’s death in 2017. At her 90th birthday party, two years earlier, she was reduced to hiring an Elton John impersonator to take his place.

All this sits oddly with Sir Elton’s latter status as agony uncle to troubled younger popsters and the channel for a whole country’s grief after the death of Diana, Princess of Wales, when he played Candle In The Wind, recast as Goodbye England’s Rose, at her funeral in Westminster Abbey.

For me, the real story of the Rocketman bears out the wisdom of his first mentor, the music publisher Dick James, almost a surrogate father who invested huge amounts of money and effort to launch him.

‘The artiste on his way up lives with failure magnificently,’ James once observed. ‘I’ve never yet met one who could live with success.’

If Sir Elton goes on performing until he’s 100, I doubt he’ll ever acquire that knack.