Firefighters battling to save Notre Dame cathedral from last night’s deadly fire had a strict set of priorities dictated by an 18th century protocol, it has been claimed.

The nearly 900-year-old cathedral lost its iconic steeple and much of its roof in the inferno on Monday, but there were no human casualties and treasures including the altar, golden crucifix and priceless rose stained-glass windows miraculously remained intact.

But a theory has emerged that this was not a mere coincidence – and that the hundreds of firefighters who battled the blaze had followed a strict protocol dating back hundreds of years. 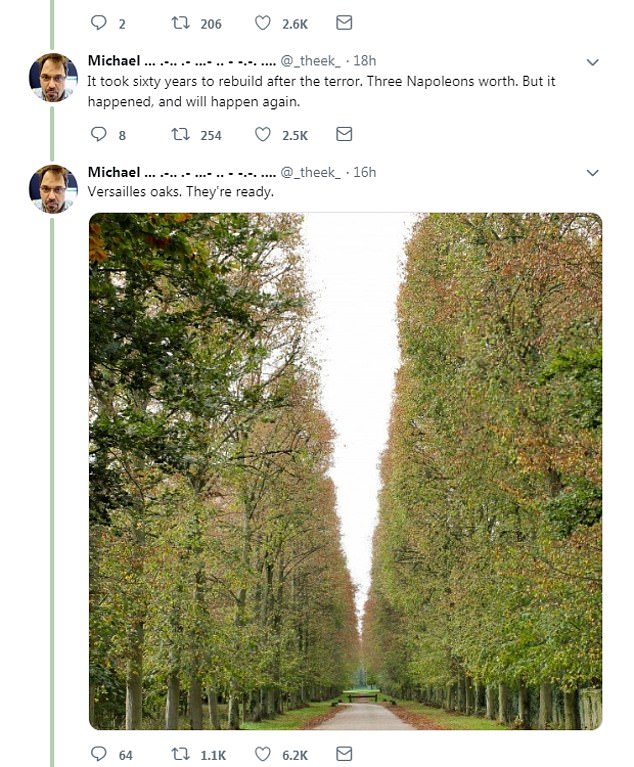 Michael claims the oaks from the Gardens of Versailles have been specially planted and maintained in case of a disaster such as the Notre Dame fire, and will be used to rebuilt the roof

The theory has been widely shared and liked thousands of times on Twitter after being aired under an account carrying the name ‘Michael’.

He claimed the some 400 Parisian firefighters, who battled for around eight hours to secure the blaze, were in fact following a 230-year-old protocol.

‘Michael’ claimed that there is a strict order of priority which the fire department in Paris followed, which is so ordered because ‘they know what can be rebuilt and what can’t.’

‘Save the people, save the art, save the altar, save what furniture you can, then focus on the structure, in that order,’ he wrote in a Twitter post which has been shared and liked nearly 30,000 times.

The theory suggests said that this protocol has been in place since the last disaster to befall the famous cathedral, when it was ransacked during the French Revolution in the 1790s. 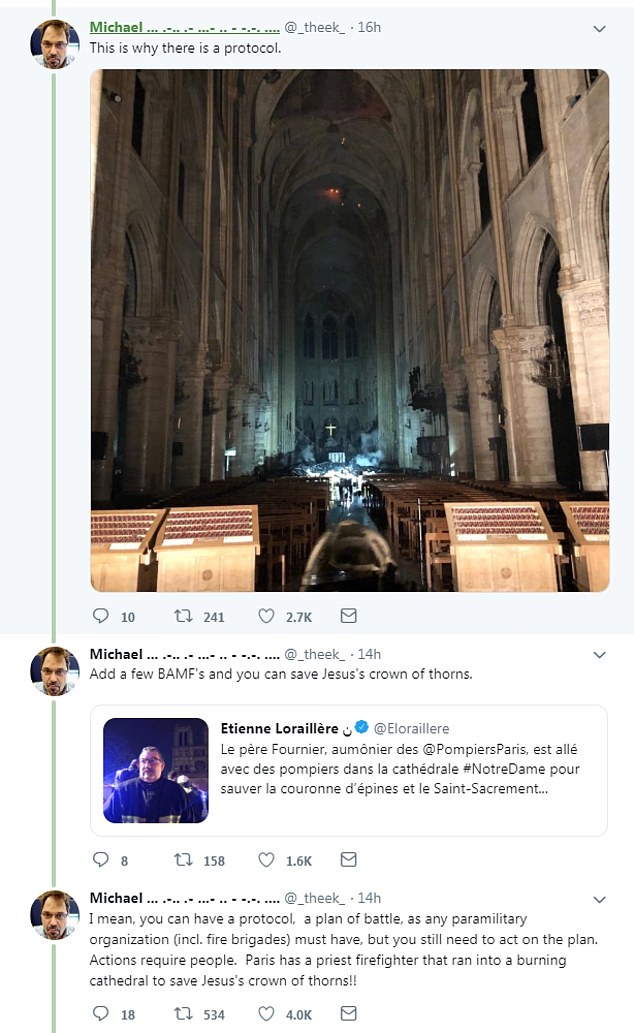 According to Michael, who said he is quoting a lecture at Versailles on long term city planning, there is a centuries-old protocol that outlines specific set of priorities, with human life ranking highest and the shell or structure of a building being considered least important

During that time, Notre Dame’s treasures were looted, her bells melted down to make cannon balls and 28 statues of biblical figures decapitated by the so-called ‘sans-culottes’, who mistook them for French kings.

The vandalised structure was then rededicated as a temple to the anti-religion and state-sanctioned Cult of Reason, with a new shrine to ‘Liberty’ replacing the Christian altar and the inscription ‘To Philosophy’ being carved in stone over the cathedral’s doors.

According to Michael’s theory, the loss of Notre Dame’s steeple and the beams supporting it, while still devastating, is still preferable to losing some of the irreplaceable items housed at the landmark. 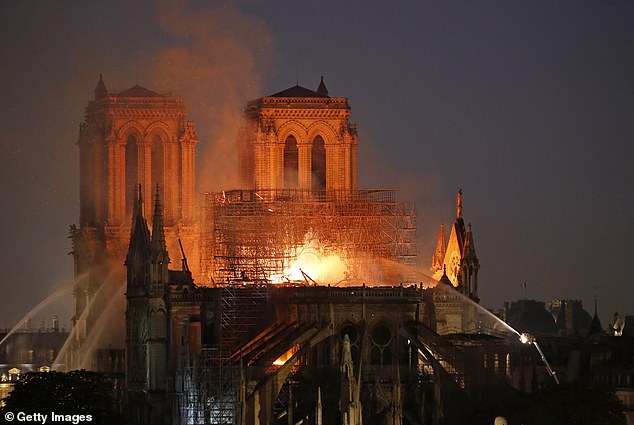 Flames and smoke are seen billowing from the roof at Notre-Dame Cathedral on April 15, 2019 in Paris, France

These include the altar featuring the 1723 statue Descent from the Cross, the Crown of Thorns – a relic purported to be worn by Jesus Christ on the cross, and a 13th-century linen tunic thought to have belonged to King Louis IX.

‘The steeple and the beams supporting it are 160 years old, and oaks for new beams awaits at Versailles, the grown replacements for oaks cut to rebuild after the revolution,’ the theory suggested.

‘This is The Long Now in action. It’s what happens when you maintain civilization.

‘It took sixty years to rebuild after the terror,’ he said, referring to the Reign of Terror period of the French Revolution – when Notre Dame was renamed ‘The Temple of Reason’, and church lands were expropriated while priests were killed or forced into exile.

‘Three Napoleons worth. But it happened, and will happen again.’ 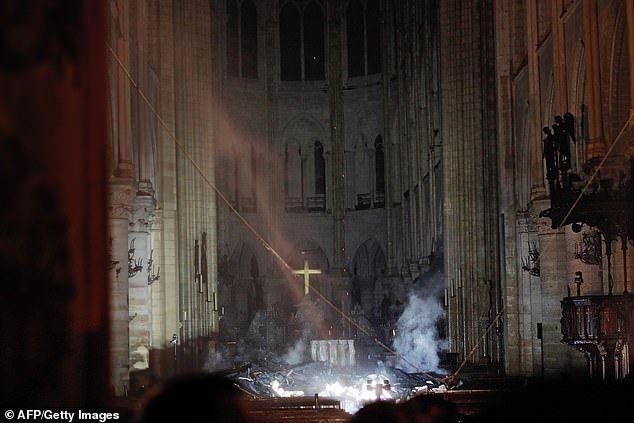 Smoke is seen around the alter inside Notre Dame cathedral on Monday evening. Miraculously the cross and altar have managed to survive the inferno 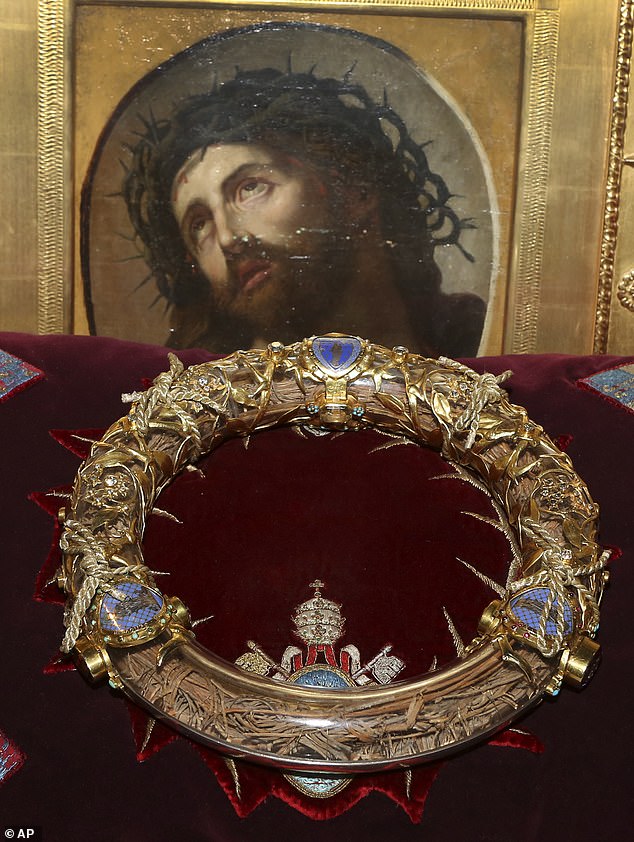 A crown of thorns which was believed to have been worn by Jesus Christ and which was bought by King Louis IX in 1239 is presented at Notre Dame Cathedral in Paris. Paris’ mayor, Anne Hidalgo, said a significant collection of art and holy objects inside the church had been safely ecovered from the fire at Notre Dame cathedral

The oaks that line the paths in the Gardens at Versailles will now be used to rebuild the beams at Notre Dame, Michael believes.

‘Those trees aren’t decorative,’ he wrote. ‘They’re farmed for just this purpose.’

However, a French cultural heritage expert this morning claimed that France no longer has trees big enough to replace ancient wooden beams that fell during the blaze.

Bertrand de Feydeau, vice president of preservation group Fondation du Patrimoine, told France Info radio that the wooden roof that went up in flames was built with beams more than 800 years ago from primal forests.

Speaking on Tuesday, he said the cathedral’s roof cannot be rebuilt exactly as it was before the fire because ‘we don’t, at the moment, have trees on our territory of the size that were cut in the 13th century.’ 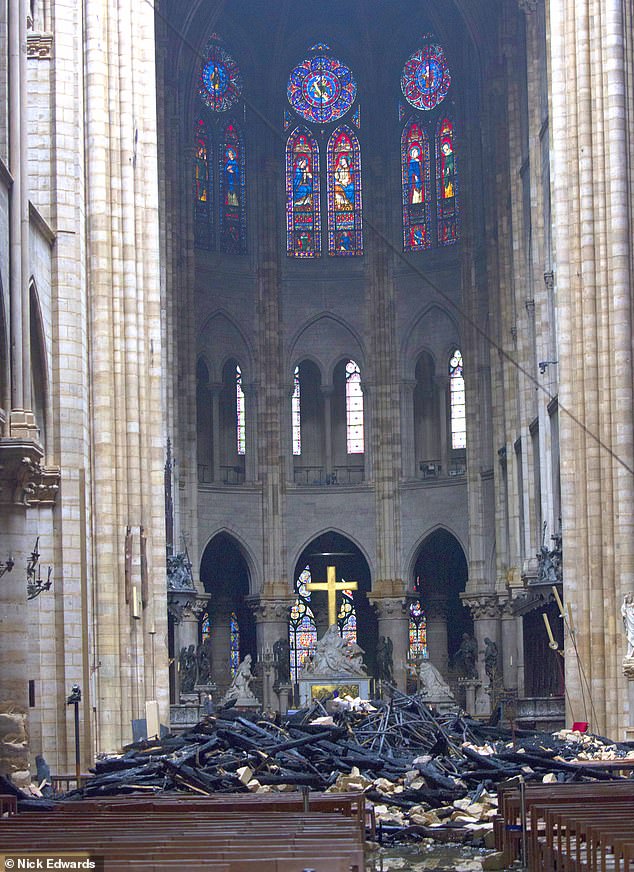 The Archbishop of Paris has said the three beautiful rose windows (pictured) on the north, west and south sides of the church had all survived intact. Fears had grown for the ‘really irreplaceable’ stained-glass windows, dating back to the 13th century, amid the heat of the fire last night

He said the restoration work will instead have to rely on new technologies to rebuild the roof.

Michael claims he was told about the protocol as part of a lecture at Versailles on disaster recovery and long term planning, but it is not certain who was conducting the talk.

He also concedes that any plan is subject to the specific and unforeseeable conditions that all organisations, including the Paris fire brigade, would have to consider.

‘You can have a protocol, a plan of battle, as any paramilitary organization must have, but you still need to act on the plan.

‘Actions require people… Imagine how heartbreaking it must have been to follow the protocol knowing it was all you could do,’ he added.