The Duchess of Cambridge broke ranks with her fellow Bafta attendees last night by not wearing a black dress in support of the Time’s Up movement, but it seems that Kate may have been showing her solidarity in a subtle but significant way.

Pregnant Kate, 36, teamed her dark green Jenny Packham gown with a dazzling emerald and diamond jewellery set, believed to have been a wedding present.

Last month, stars arrived en masse at the Golden Globes dressed in black to support Hollywood’s backlash against sexual harassment, with many also accessorising with emeralds because of the significance of the stone as a symbol of ‘hope, renewal and growth’.

Debra Messing, Zoe Kravitz and Catherine Zeta Jones were just some of the stars who wore the precious stone which was a talisman of Alexander the Great and Aristotle, who identified emeralds as a symbol of victory.

Although the Royal Family is meant to avoid political statements, royal watchers have also interpreted the black sash on Kate’s dress as well as her matching shoes and clutch as a subtle nod to her backing for the Time’s Up movement.

Of course, the Duchess made sure to pull out all the stops for her red carpet appearance with experts estimating her jewellery set cost at least a million.

Stephanie Lee of London-based jewellers Ntinga told Femail: ‘The Duchess of Cambridge wore a stunning Columbian Emerald and diamond suite made up of four approximately 20-25ct Emeralds surrounded by a what appears to be cluster of marquise and round cut diamonds in a triple row drop collar.

The Duchess of Cambridge appeared to show her support for the Time’s Up movement at last night’s Baftas in a £1M emerald jewellery set. The stone is a symbol of hope, as well as victory and has been worn by multiple A-listers on the red carpet 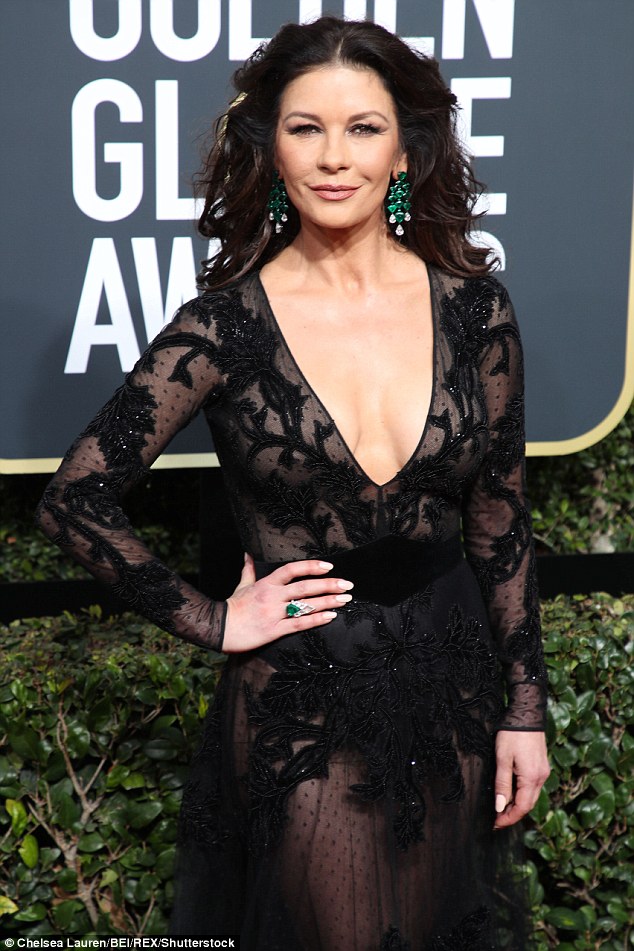 Catherine Zeta Jones, 48, added an incredible pair of statement emerald earrings to her all-black ensemble, worn to show support for the Time’s Up movement 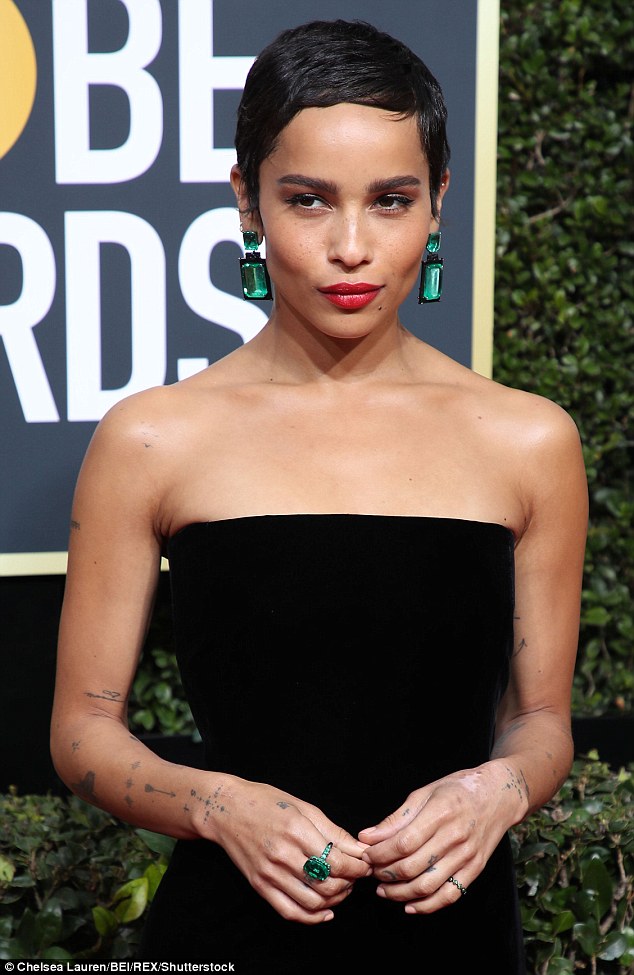 Zoe Kravitz, 29, wore emeralds a symbol of hope, growth and renewal to this year’s Golden Globes in support of Time’s Up

‘The matching earrings had been modified from a drop pair she had worn in 2014 to made a large cluster earring with an emerald set in the centre of diamonds and a matching cuff.

‘We would have thought this suite would be valued within the seven figured price bracket.’

The Duchess previously wore the stunning earrings during her official visit to New York in 2014, while pregnant with Princess Charlotte.

The earrings are adjustable and can either be worn as studs or drop earrings.

The emerald is also said to inspire ‘an ongoing search for meaning, justice, compassion, and harmony’ according to the experts at Crystal Vaults.

The meaning took on an extra poignancy at the 75th Golden Globes, where stars stood in solidarity against abuse and gender inequality in the workplace, in the light of the shocking sexual harassment scandal that has gripped Hollywood over the last few months.

Catherine, 48, Zoe, 29, and Debra, 49, all choosing to wear completely black ensembles that they then accessorized with large emerald earrings and rings. 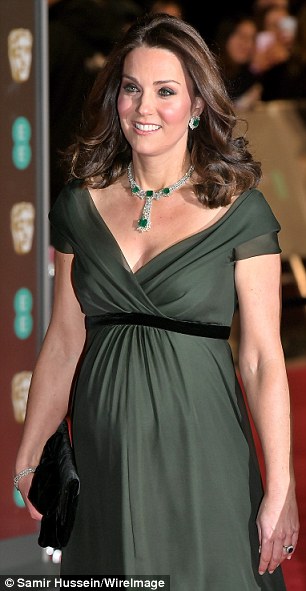 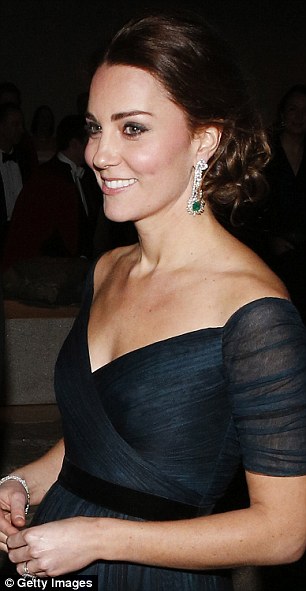 The Duchess wore a large cluster earring with an emerald set in the centre of diamonds to the Baftas last night (left). In New York in 2014, she sported the same pair converted into drop earrings 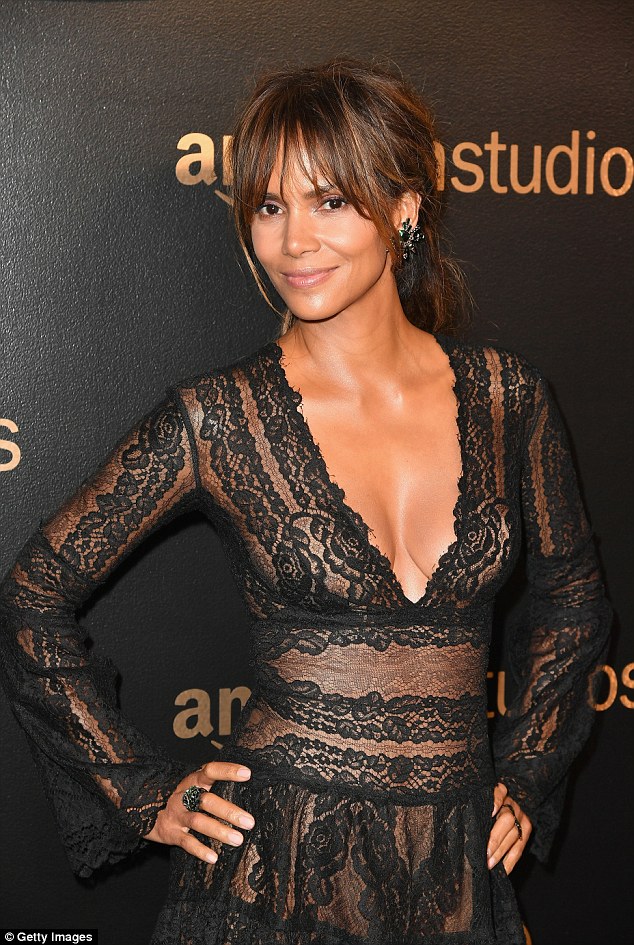 Halle Berry wore emeralds on her hand, while also donning a pair of emerald-colored crystal earrings from Swarovski 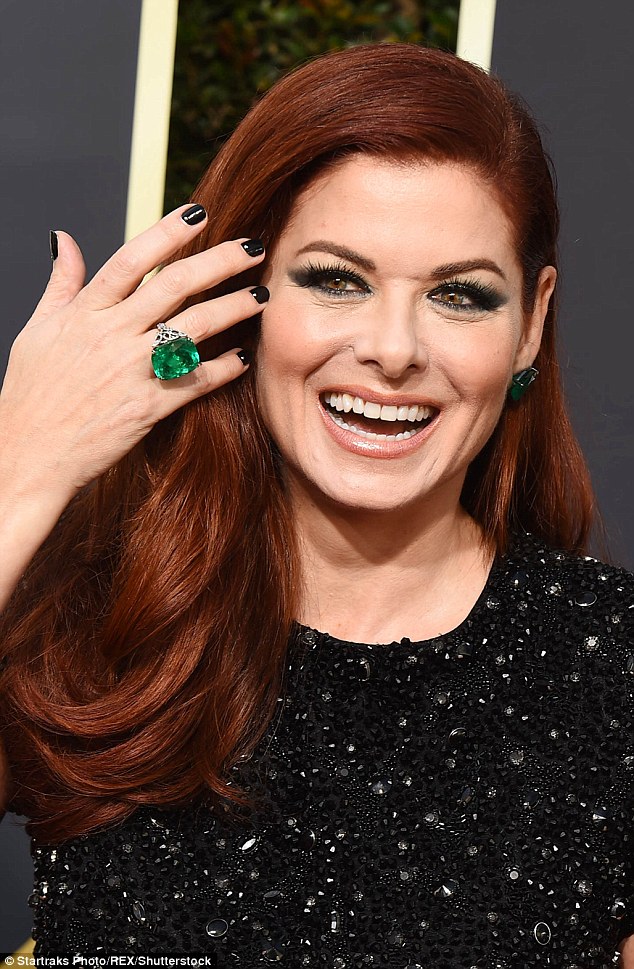 Will & Grace star Debra Messing, 49, who spoke out about gender pay inequality at the Golden Globes, wore matching emerald earrings and a ring, both by Lorraine Schwartz 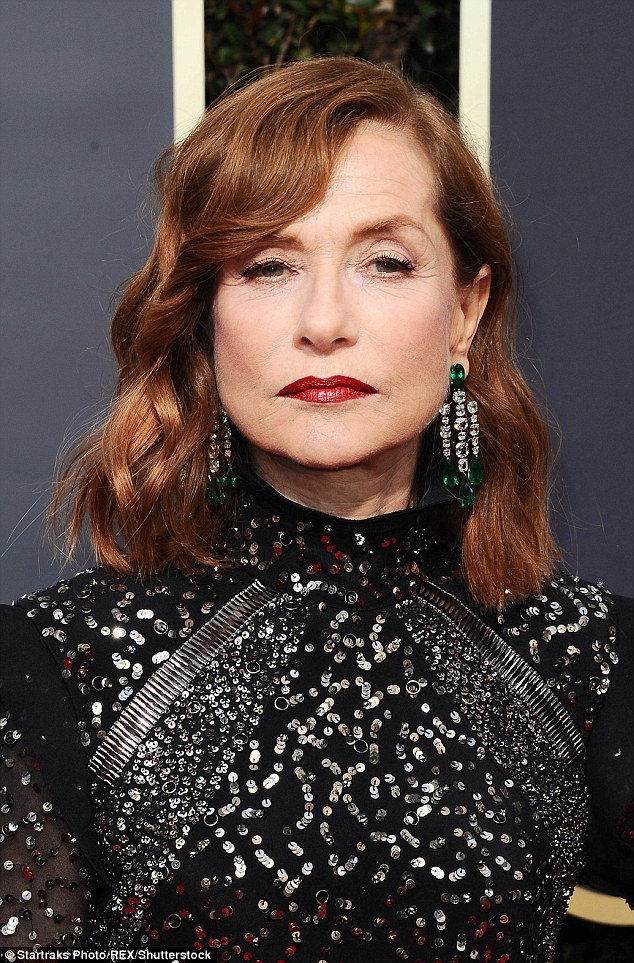 Each of the three women opted for jewelry by Lorraine Schwartz.

Halle Berry, meanwhile, opted for a slightly more subtle nod to the meaningful trend, adding an emerald ring to her hand – while also showing off some emerald-colored crystal earrings. The Oscar winner also wore all-black.

Nominee Isabelle Huppert, who received a nod for her role in Elle, donned a pair of large emerald and diamond earrings, which paired beautifully with her bedazzled black dress.

WHAT IS THE ‘TIME’S UP’ MOVEMENT?

The Time’s Up initiative is a movement against sexual harrassment.

It is backed by more than 300 women in Hollywood including Meryl Streep, Michelle Williams, Laura Dern and Oprah Winfrey.

The group banded together to advocate for gender parity in executive ranks and provide legal defense aid of $13m (£9m) for sexual harassment victims.

It was set up at the start of the 2018 in response to a wave of sexual harassment allegations in the industry, particularly in relation to mogul Harvey Weinstein.

The leaderless initiative includes a legal defense fund to help working-class women – like cleaners, nurses and workers at farms, factories, restaurants and hotels – protect themselves from sexual misconduct and the fallout from reporting it.

Legislation to penalise companies that tolerate persistent harassment, and to discourage the use of nondisclosure agreements to silence victims.

The Time’s Up movement was founded as the next step to the #MeToo movement which saw women across the globe share their stories of sexual harassment.