Did Kyle Sandilands accidentally reveal the gender of his baby? Radio star, 50, gives a telling hint


Kyle Sandilands appeared to accidentally let slip the gender of his unborn baby on Thursday when he appeared on KIIS FM’s 3pm Pickup.

Earlier this week, the shock jock revealed he was expecting his first child with fiancée Tegan Kynaston.

Did Kyle Sandilands accidentally reveal the gender of his baby? Radio star, 50, gave fans a VERY telling hint on the 3pm Pickup this week as he awaits the birth of his first child with fiancée Tegan Kynaston, 36

He made the slip as he spoke about some of the keepsake items from the pregnancy he and Tegan will be keeping in a baby book or photo album.

Kyle said that alongside with the umbilical chord and the positive pregnancy test, he’ll be keeping his baby’s foreskin once it gets circumsised.

‘We’ve kept the stick, I’ve got it in a photo album and the next thing to go in the album is the chord and the foreskin,’ he said.

He added: ‘I’m keeping it in the photo album!’ 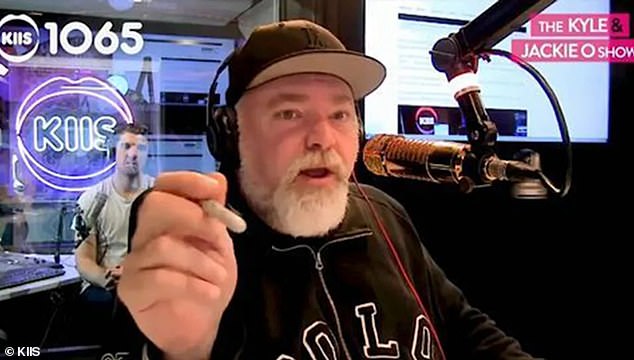 Spilling the beans: Speaking to the hosts, Kyle, 50, spoke about his excitement about becoming a father for the very first time and also hinted he’s having a boy with fiancée Tegan Kynaston, 36

He also spoke about the first time that Tegan revealed to him that she was pregnant.

‘I was overjoyed, picked her up, swung her around,’ Kyle sweetly recalled. ‘I was very happy.’

Earlier this week on The Kyle and Jackie O Show, Kyle said he wants to have a ‘little gay son’. 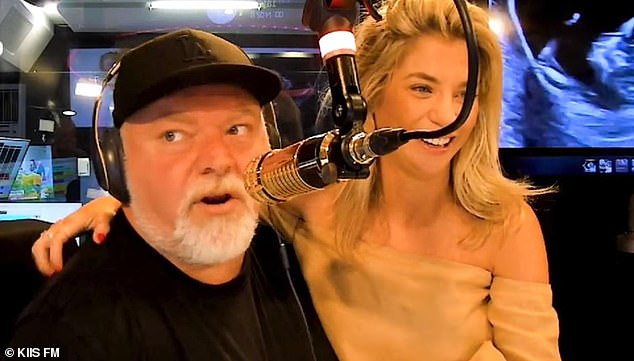 Hint hint! Kyle said that alongside items including the umbilical chord and the positive pregnancy test, he’ll be keeping his baby’s foreskin once it gets circumsised

He said he’s hoping for ‘either a girl… or a little gay son’, before praising his partner’s ‘beautiful, big, meaty t***ies’ since becoming pregnant.

‘We’re having a baby!’ Kyle declared on his radio show, as the entire KIIS FM studio cheered.

He then joked he plans to hire a ‘dozen Fijian nannies’ once the baby is born.

Tegan, who is three months pregnant, also revealed her fiancé had been busy preparing for their child’s arrival, even helping pick out cribs.

The couple, who got engaged in Queensland over the Christmas holidays, began trying for a baby last year. 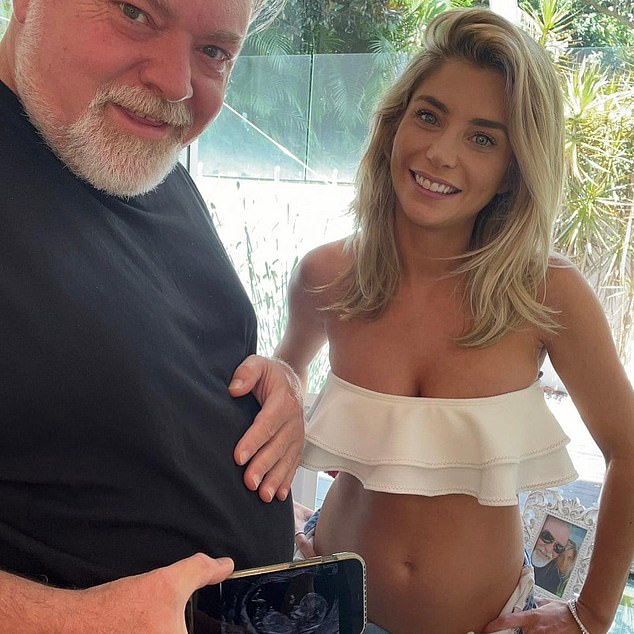 Baby joy: Sandilands and Kynaston, who got engaged in Queensland over the Christmas holidays, began trying for a baby last year