Did Notre Dame’s bees survive? Fate of 18,000 insects that lived in rooftop hive is still unknown

Did Notre Dame’s BEES survive the blaze? Hive that was home to 18,000 insects was undamaged… but fate of its tiny inhabitants is unknown

A beekeeper who kept three beehives – housing some 18,000 bees – on the roof of Notre Dame cathedral says he is still anxiously waiting for news of their fate.

An inferno raged through the cathedral in central Paris for more than 12 hours on Monday, destroying its spire and almost all of its ornate centuries-old roof.

Nicolas Géant, who has kept bees at Notre Dame since 2013, said he thinks and hopes the bees survived after spotting the apparently intact beehives in aerial photographs of Notre Dame taken by drones.

The three beehives on the rooftop of Notre Dame in Paris (circled) appear to have be intact since a fire destroyed the spire and much of the roof on Monday, but their keeper is still awaiting news and cannot reach the hives to check on them 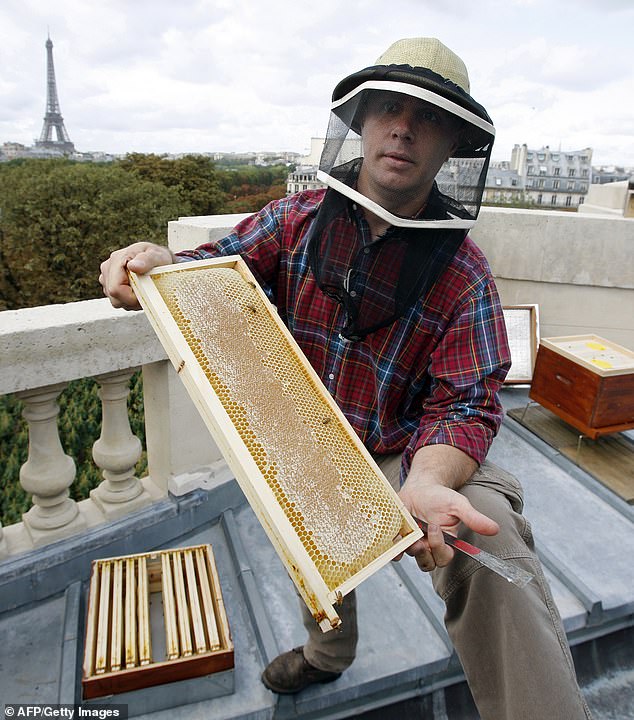 ‘If you look at the photos from the sky, you see that everything is burnt, there are holes in the roof, but you can still see the three beehives,’ Géant told NBC News.

Géant has been in limbo since Monday, unable to check on his colonies because firefighters say there is still a risk that the fragile structure could entirely collapse.

Sixty of them are still keeping a vigil at the world famous landmark to ensure no further fire erupts and monitoring ‘hot spots’ that might cause further damage.

‘The policemen and firemen won’t let me go up there,’ Géant said. ‘I will try again tomorrow.’ 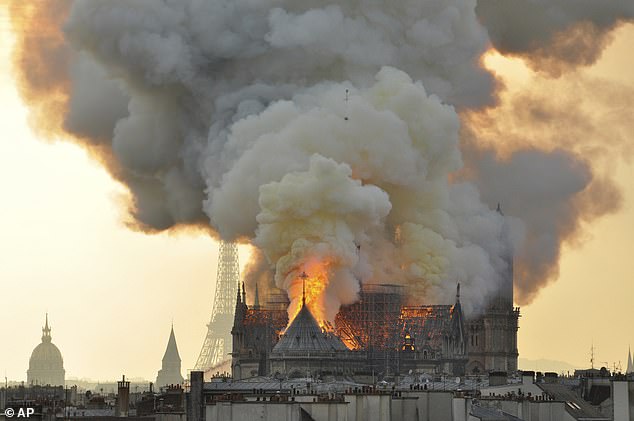 Flames and smoke rise from the blaze at Notre Dame cathedral in central Paris on Monday evening. The cathedral lost its iconic spire and around two-thirds of its roof in the devastating disaster 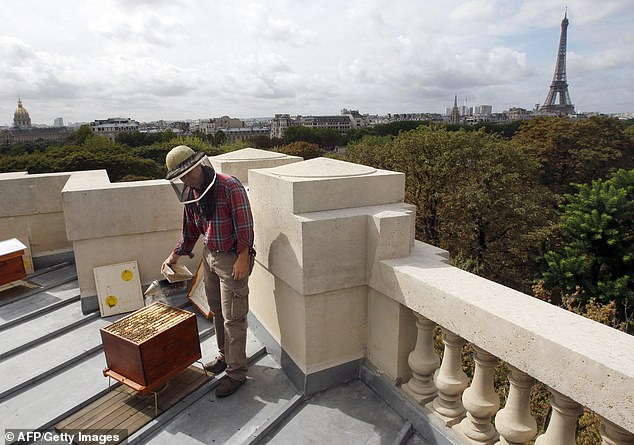 Nicolas Géant, 51, harvests honey for the first time from a beehive set up on the roof of the Grand Palais in Paris 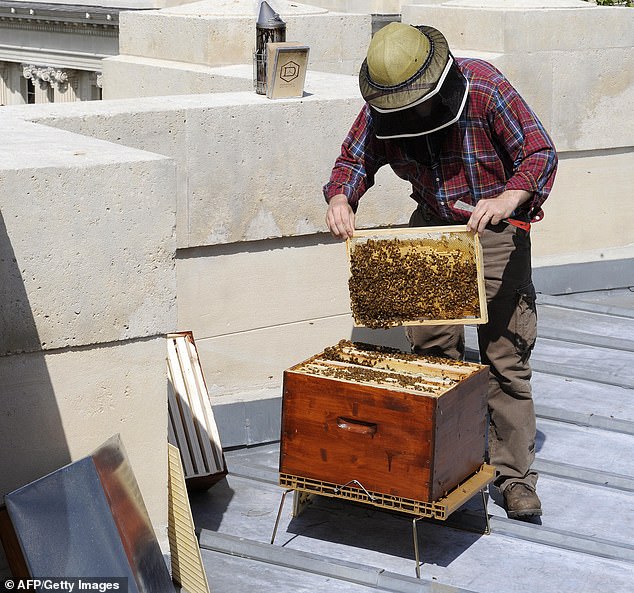 Géant (pictured) keeps three hives on the roof of Notre Dame, each housing some 60,000 bees

The beehives were installed on Notre Dame’s roof six years ago as part of a city-wide biodiversity project that placed colonies across Paris.

Beeopic, the company that maintains the hives, wrote on its Instagram page that the aerial photographs had provided an ‘ounce of hope’ for the insects.

‘The pictures taken by different drones show that the 3 hives are still in place… and obviously intact!,’ yesterday’s post reads.

‘As for the occupants, the mystery remains intact. Smoke, heat, water… we will see if our brave bees are still with us as soon as we have access to the site, which may take a lot of time.’

Géant told NBC he has received messages from all over the world from people concerned about whether the bees had survived the blaze.

The 51-year-old, who keeps the insects throughout France and in California, said it was his dream come true to be able to practice his passion on top of ‘the most beautiful church in the world’.

‘There is a historic relationship between bees and the church, for a long time they used the wax from the bees to make the candles,’ he told NBC.

The French maker of the blockbuster game ‘Assassin’s Creed Unity’, which takes place inside the Notre-Dame cathedral, said Thursday it was offering the title for free for a week to give players a peek inside the fire-scarred monument.

‘We want to give everyone the chance to experience the majesty and beauty of Notre-Dame,’ Ubisoft said in a statement, announcing that it would give the game away for free on PC between April 17 and April 25.

‘We stand in solidarity with our fellow Parisians and everyone around the world moved by the devastation the fire caused,’ the company said.

Ubisoft also pledged 500,000 euros ($563,012) towards the restoration and reconstruction of the cathedral, joining a long list of companies and business tycoons that have promised help totalling over 850 million euros so far.

Released in November 2014, ‘Assassin’s Creed Unity’ puts the player in the shoes of Arno Dorian, a young Assassin swept up in the French Revolution. 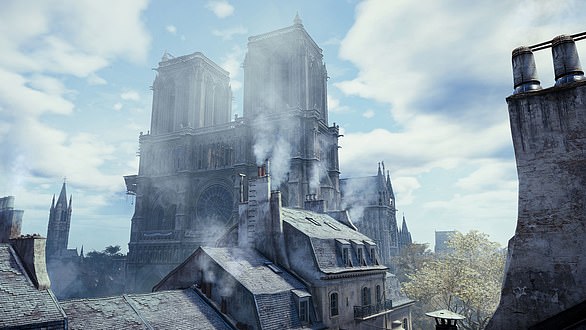 Notre Dame Cathedral in Paris, as it appears in their game Assassin’s Creed Unity

Players can also climb around a scale model of the cathedral.

In a 2014 interview with Geek Ireland, one of the game’s designers Caroline Miousse said reproducing Notre-Dame took Ubisoft teams 14 months of work, followed by a further three weeks ‘to dress its interior in accordance to the Revolution era.’

More than 100 million Assassin’s Creed games have been sold since the launch of the first title in 2007.