Did someone say LOCKDOWN? Panic-buyers form train of trolleys outside Sainsbury’s and Costco

Panic-buying hordes descended on supermarkets and shops today as the UK’s second national lockdown loomed on the horizon – snapping up clothes and even a snowman.

Hundreds of customers lined up to get into stores, including Sainsbury’s and wholesalers Costco, ahead of the shutdown coming in on Thursday.

And those hoping to stay at home were also dealt a blow as delivery slots became booked up for the entire month.

The chaos began to unfold after Prime Minister Boris Johnson stunned the nation by announcing a second national lockdown after weeks of insisting it would not happen.

One shopper got in early to buy a snowman ahead of the new strict restrictions, perhaps fearing it could be his last chance 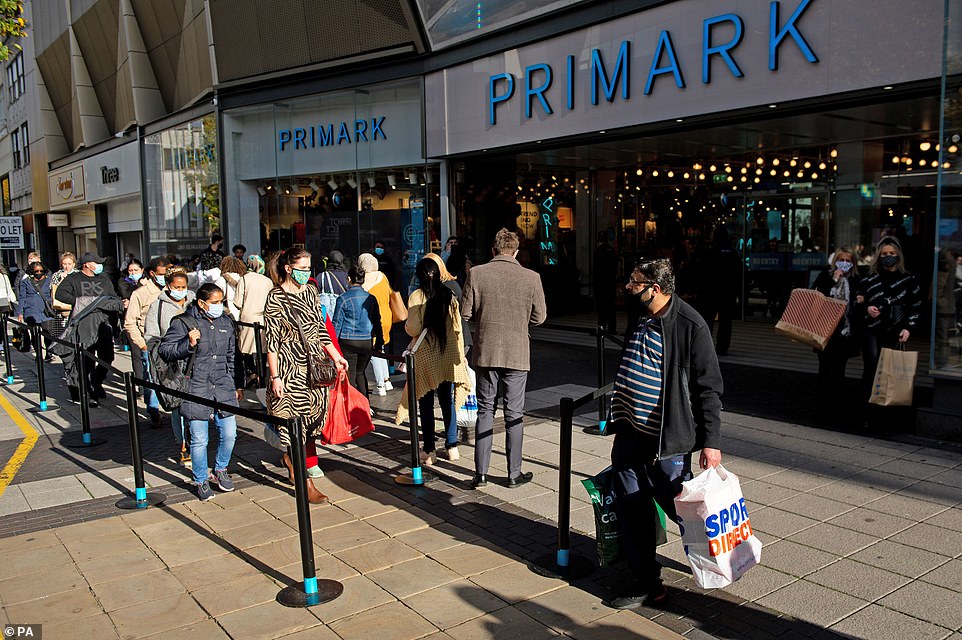 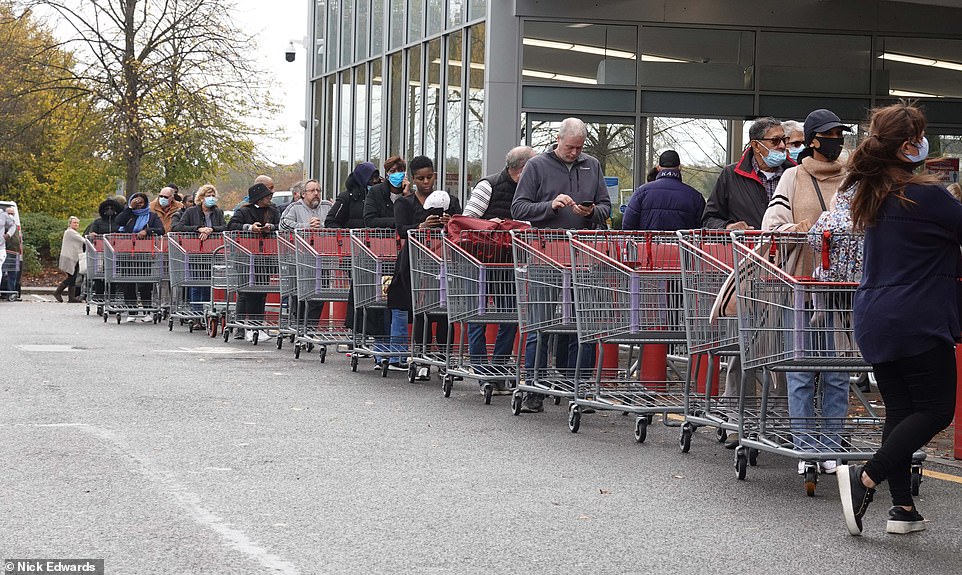 But shoppers descending on stores were met with bewilderment by onlookers – given that they will be allowed to stay open during the restrictions.

In Croydon outside Cosco there were lines of people queuing up to get inside this morning after the weekend’s announcement.

The story was sadly the same in other supermarkets, with some shelves picked clean by shoppers.

Primark – who will have to close after Thursday – was also popular with customers buying presents ahead of December 25. 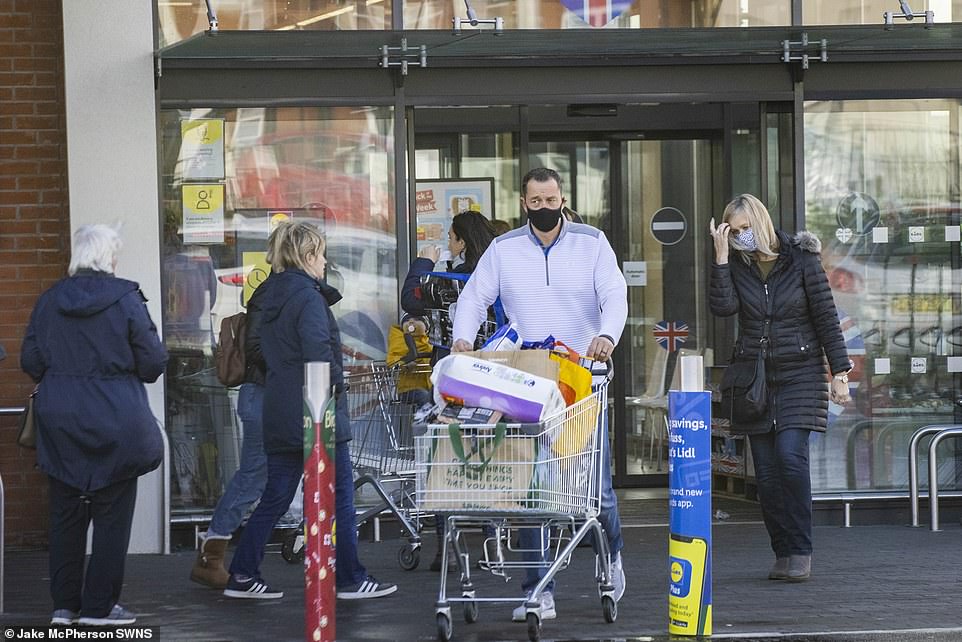 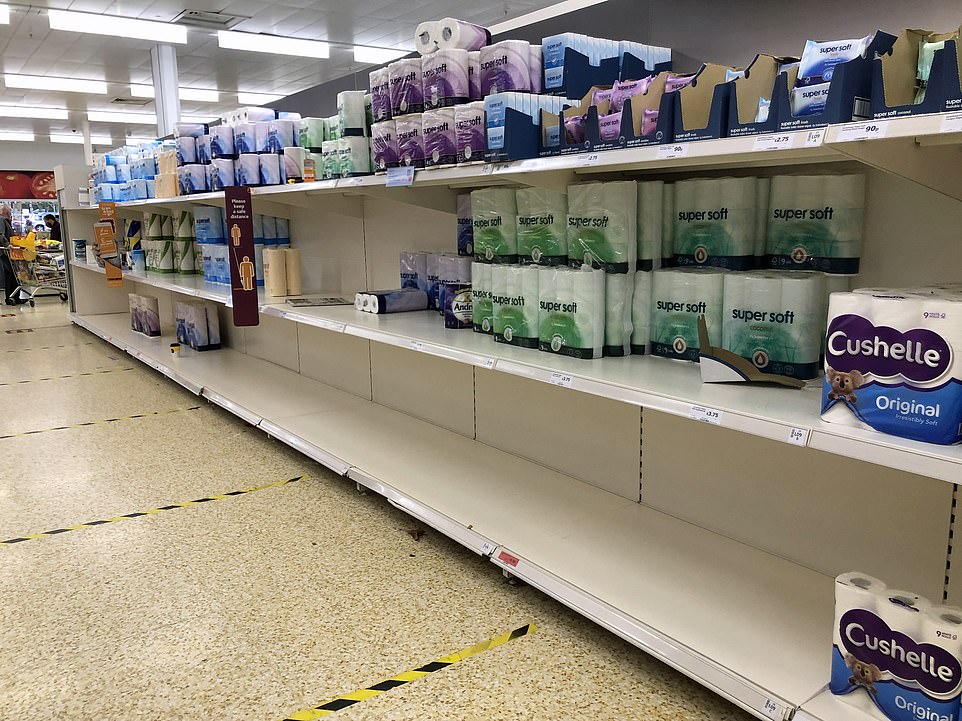 In Sainbury’s in Hedge End, Hampshire, many of the toilet roll shelves were very low on stock amid fears shops could run out 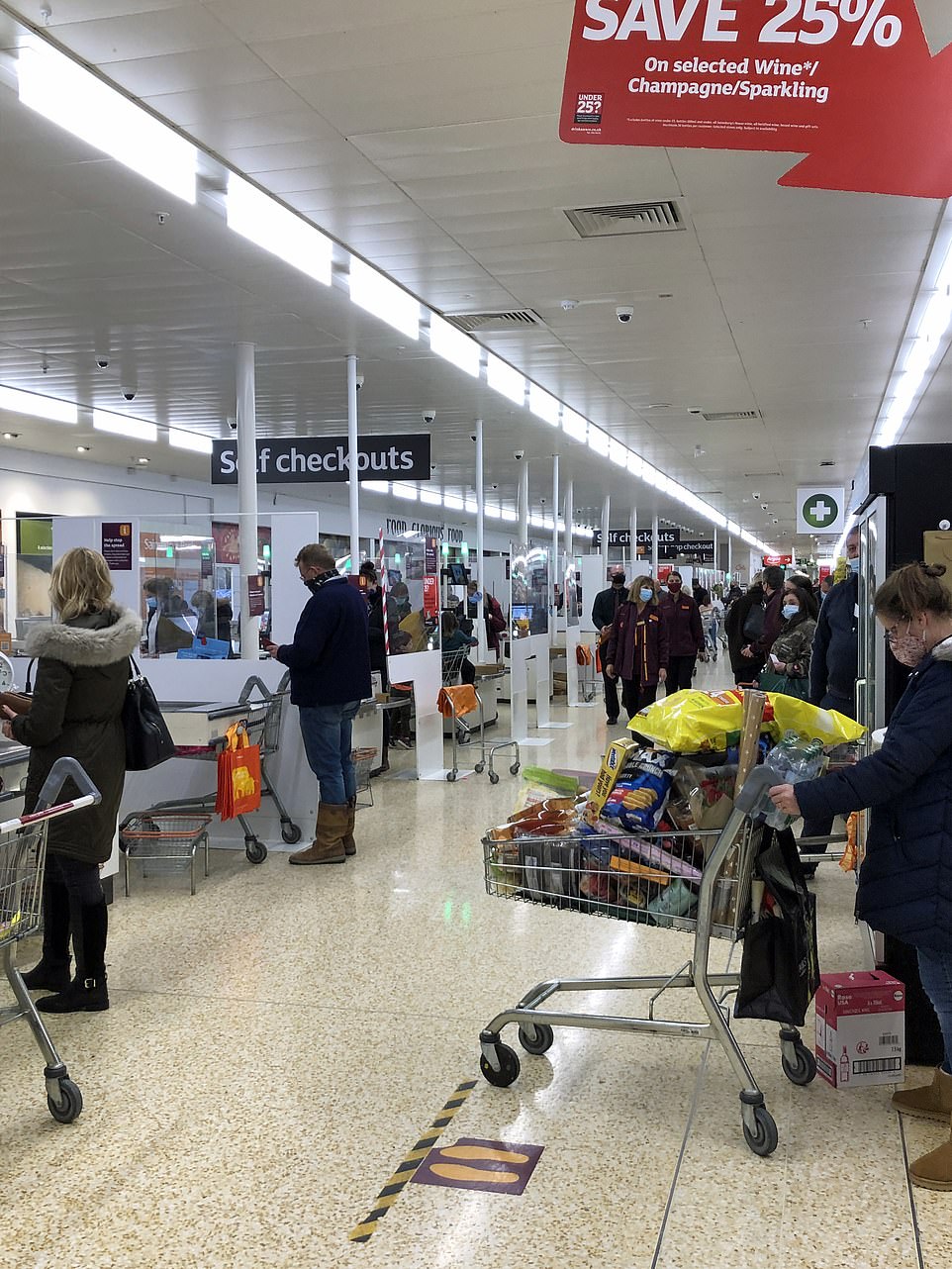 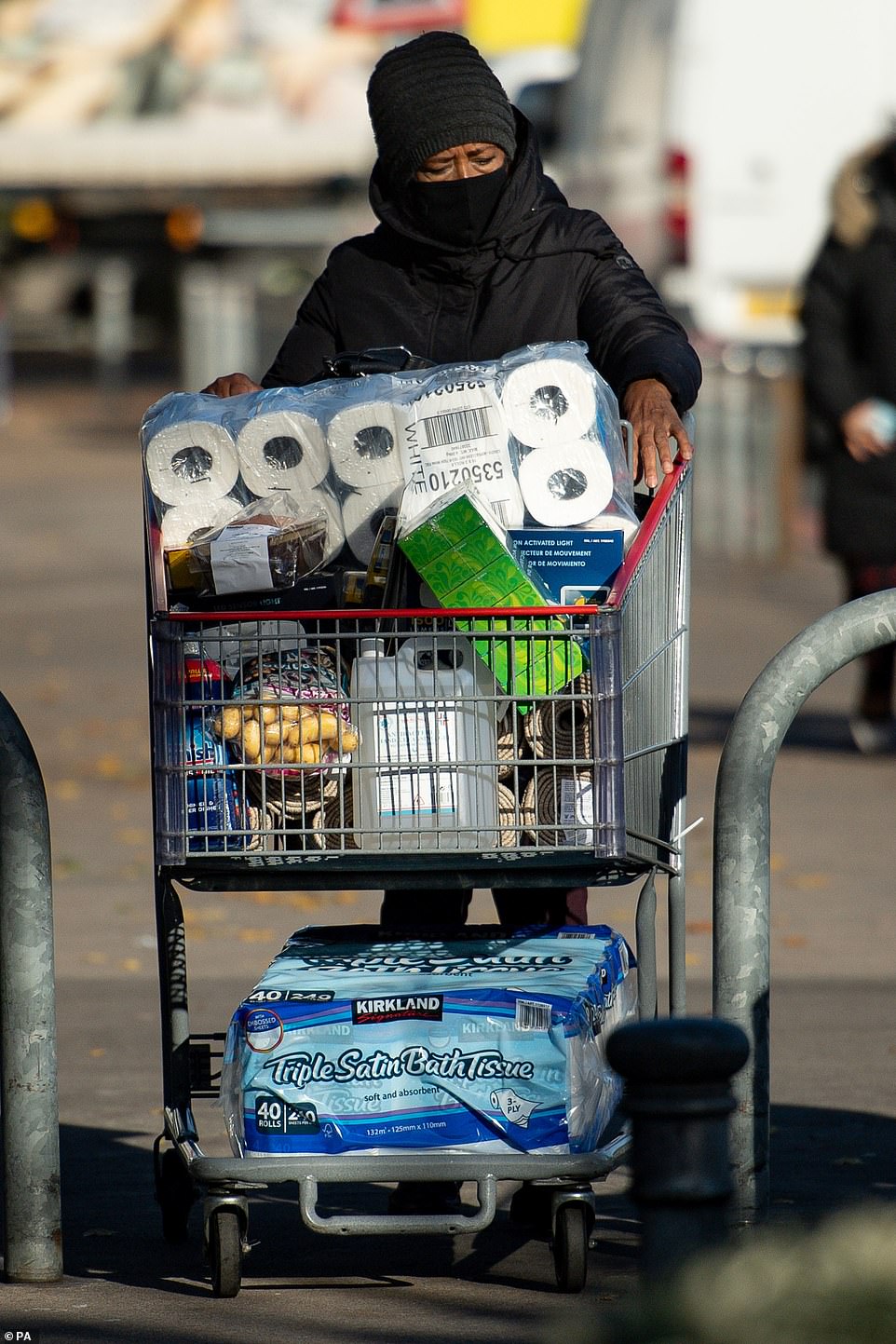 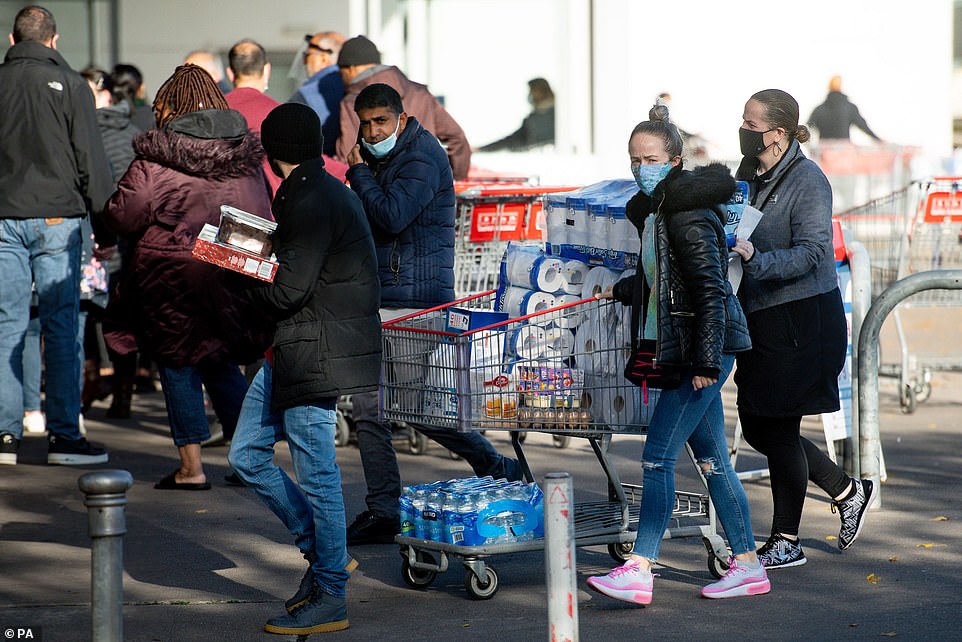 He said: ‘There is no need to panic buy.

‘The only way things will run out is if people insist on buying literally everything for no good reason.’ 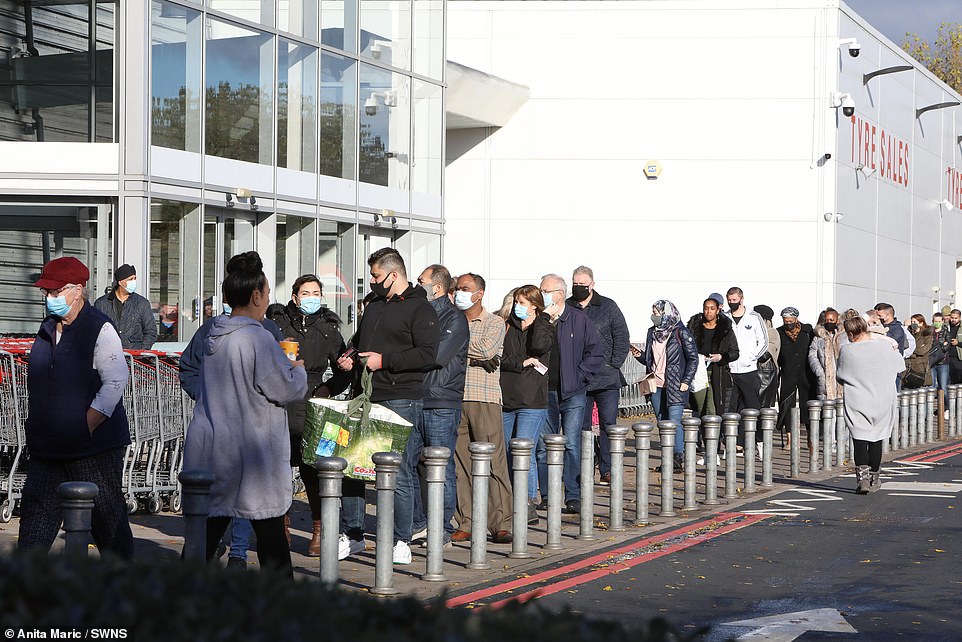 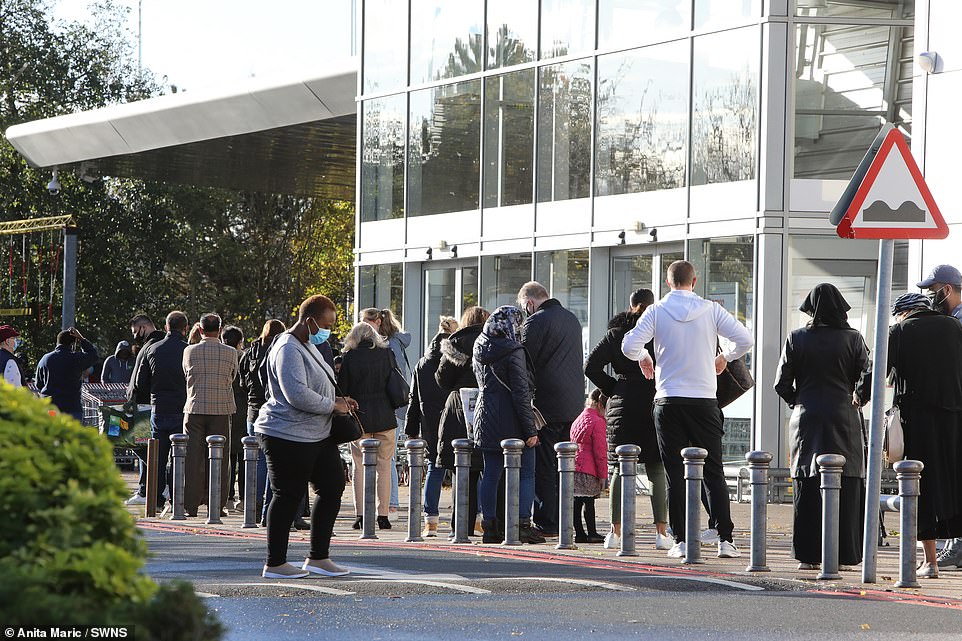 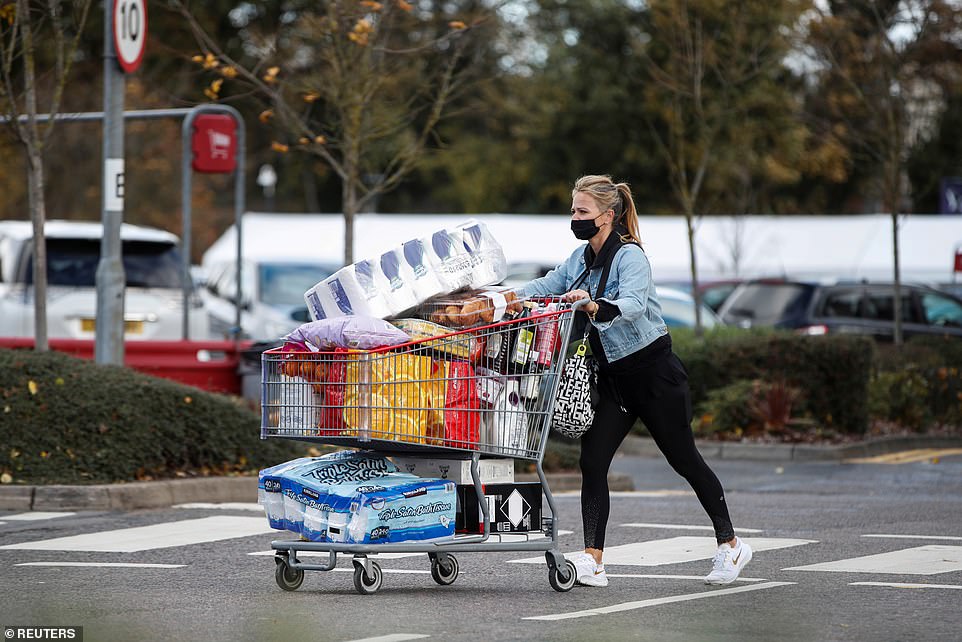 What are the rules for shops from Thursday?

Shops that can stay open:

Shops that must shut (including but not limited to):

On Twitter David Clayton describe apocalyptic scenes as he ventured out into London.

He said: ‘Just had to go into the city. Armageddon.

‘Like a scene from day of the dead. People with a look in their eyes that’s a mix of panic and desperation.

‘Quick buy stuff regardless of whether or not they need it. Horrible.’

There was also difficulties in trying to secure delivery slots to get food sent to homes.

In some parts of London, Morrisons had no availability for the whole of the month of November.

It came after the Covid Quad committee, which has taken all the key strategic decisions during the pandemic, met in the Cabinet Office on Friday amid doomsday predictions from the Government’s SAGE committee of scientific advisers.

Mr Johnson was forced to unveil the new lockdown  at a hurriedly-arranged press conference yesterday after plans from the meeting leaked.

The measures come into force from midnight on Thursday morning until December 2, and close all but essential shops, restaurants, pubs, hairdressers and leisure centres.

The furlough scheme that pays workers 80% of their wages will be extended for a month, and travel outside the UK will be allowed only for ‘work’.

Mr Johnson said it was the the only way to avert bleak Sage predictions of 85,000 deaths this winter, which would force doctors to choose between saving Covid sufferers and those with other illnesses.

He said: ‘No responsible PM can ignore the message of those figures. We’ve got to be humble in the face of nature.’