A UK-flagged oil tanker seized by Iranian special forces could have been sent off course by Russian spy technology which ‘spoofed’ its state-of-the-art navigation system, it is feared.

The Stena Impero was boarded by heavily-armed Iranian troops who fast-roped onto the deck of the 30,000-tonne tanker shortly after 4pm on Friday.

MarineTraffic monitored the Swedish-owned vessel and showed how it took a dramatic turn to the north while passing through the Strait of Hormuz.

The Stena Impero, pictured, was boarded by Iranian special forces around 4pm on Friday and ordered to turn north and away from the international shipping lanes 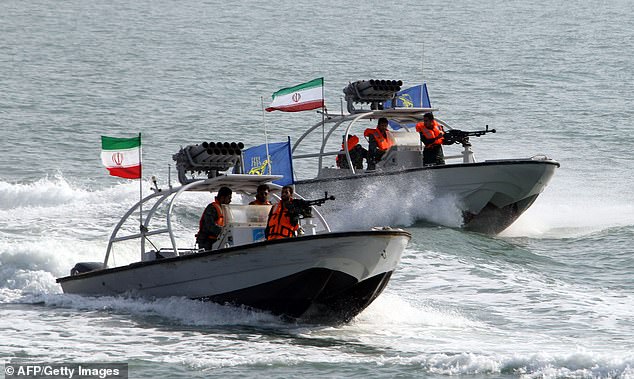 It is feared the Iranian Revolutionary Guard, pictured, has access to Russian spy GPS spoofing technology which can fool GPS units onboard aircraft and shipping

Iranian special forces targeted the tanker as it passed through the 21-mile wide choke point on Friday.

According to the Sunday Mirror, GCHQ and MI6 are currently investigating whether the Iranians deployed GPS spoofing technology which can fool modern navigation systems which rely on satellites to plot their course.

A source said: ‘Russia has the technology to spoof GPS and may have helped Iran in this venture as it was extremely brazen. It would make British shipping extremely vulnerable and will be of grave concern to Royal Navy warships in the region.

‘The Islamic Revolutionary Guard Corps and Russian intelligence have worked very closely in Syria, protecting and promoting their interests.’

Many of the 2,000 companies operating ships in the region have ordered their vessels to transit Hormuz only during the daylight hours and at high speed. But only a handful of the companies have halted bookings.