She was asked about the 10-month long relationship with Trump during which she said she developed feelings for the future president and fell for his ‘charm’ and ‘charisma.’

A month after they started their romance in June 2006, McDougal said Trump invited her to a celebrity golf tournament that he was participating in at Lake Tahoe. 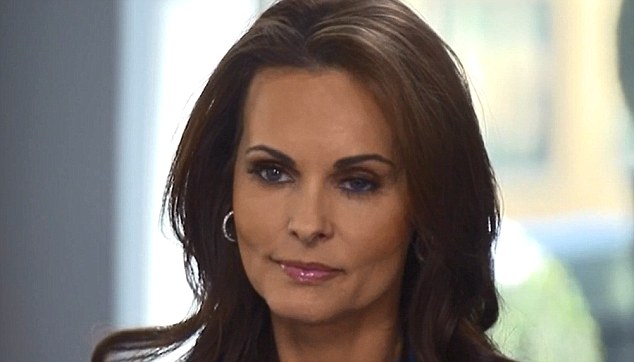 McDougal gave her first television interview Thursday night to Anderson Cooper of CNN. She said she was surprised to learn Trump may have been intimate with other women during their time together that weekend 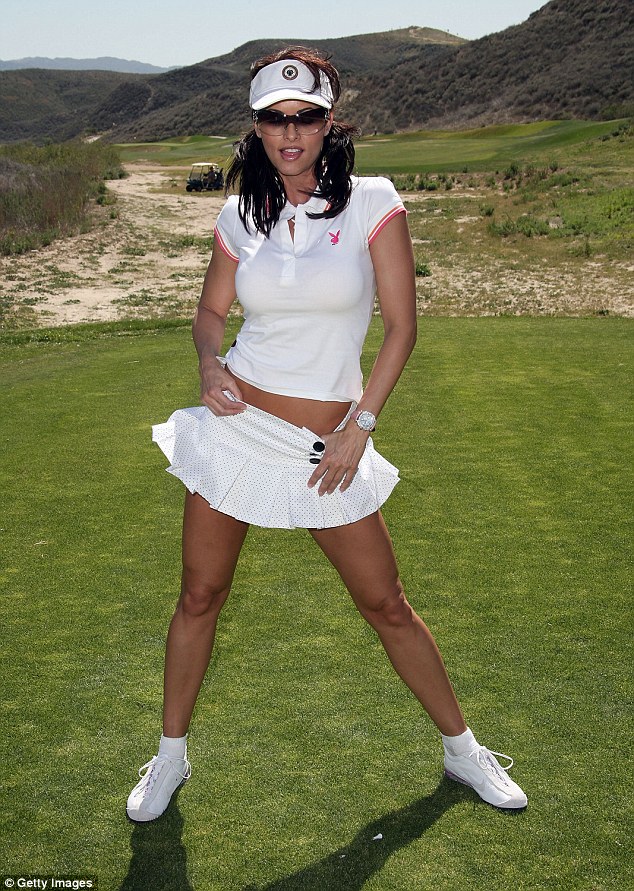 Trump and Daniels aka Stephanie Clifford pose together in 2006. McDougal said she could not understand how Trump found the time for a tryst with Daniels during that event

It was during that four-day weekend in Tahoe that Trump would bed both McDougal and Daniels, according to GQ.

During her sit-down with CNN, McDougal said she was surprised to learn that Trump had slept with another woman during that weekend.

‘I was with him a lot, so I didn’t see anything, but could he have stayed a day longer than me? Sure,’ McDougal said when asked about Trump’s alleged dalliances.

McDougal said she could not understand how Trump found the time for a tryst with Daniels during that event.

‘My first thought is how could she have been with him when I was with him?’ McDougal said of Daniels.

‘The only time [she and Trump] weren’t together on that particular trip was when he was on the golf course golfing. 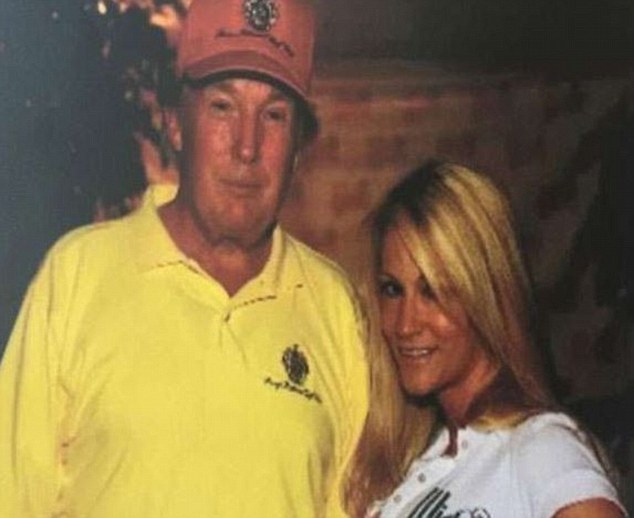 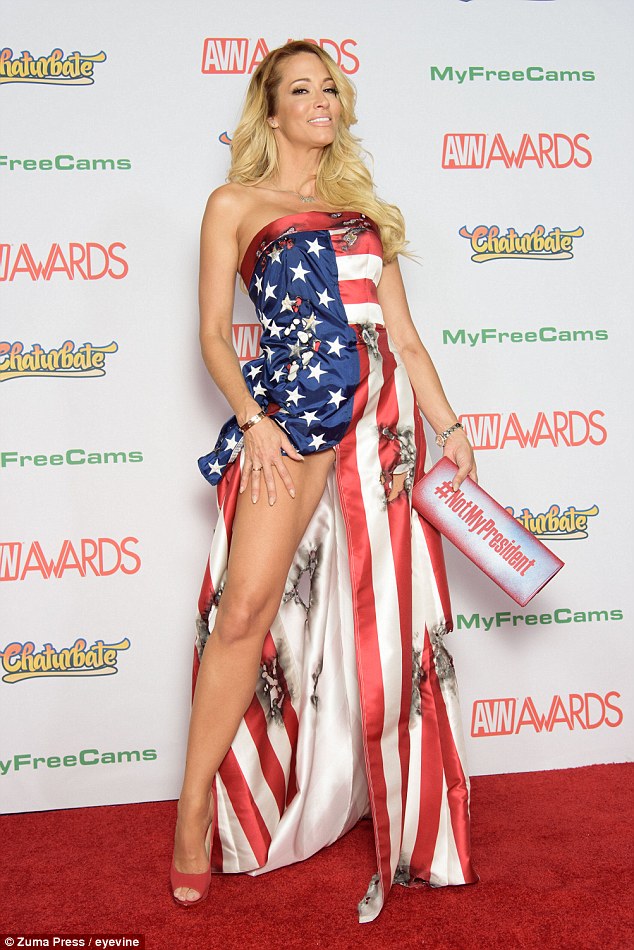 Drake says she and two other women went to his room where Trump, who was wearing pajamas and accompanied by a bodyguard, hugged and kissed them

‘I didn’t go, clearly, but I went to every event, every after thing, parties, daytime things, I was there. That’s why I can’t understand.’

Drake said she and two other women went to his room where Trump, who was wearing pajamas and accompanied by a bodyguard, hugged and kissed them.

She has alleged that Trump offered her $10,000 in cash and use of his private jet in exchange for sex. Trump has denied the allegations.

Both McDougal and Daniels are suing in order to free themselves from nondisclosure agreements which they signed barring them from speaking out about their alleged trysts with Trump.

Under the deal, she got a $150,00 payment – shared with her lawyers – and what she believed to be the promise of magazine cover stories and fitness columns.

However the agreement barred her from discussing any relationship with Trump.

Her suit argues that the agreement is ‘void due to both fraud and illegality,’ and seeks to restore her ability to talk about the alleged affair.

The nation will hear more from Daniels this Sunday, when her interview with Cooper, this time on CBS’ 60 Minutes, will air.

Daniels’ lawyer says she had an affair with Trump. 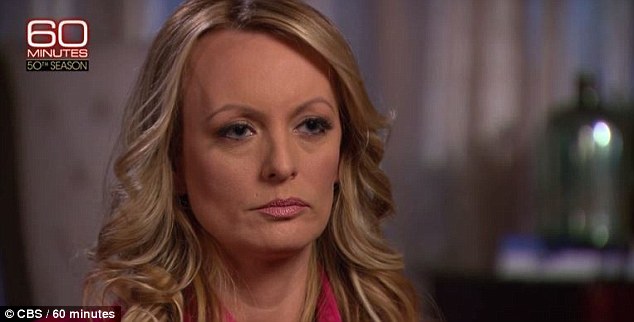 The anticipated Stormy Daniels interview with 60 Minutes will air this Sunday, CBS has announced 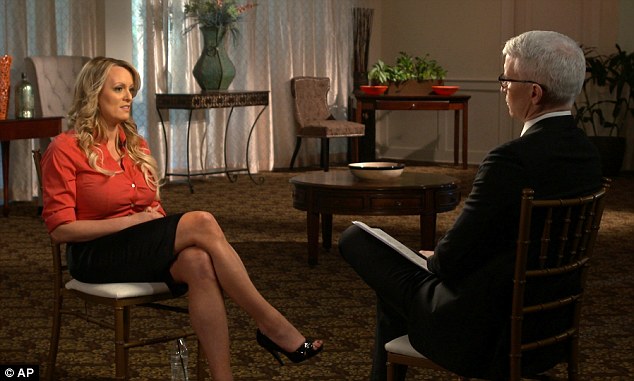 Trump has denied having an affair with Daniels and McDougal.

It was revealed this week that Trump’s personal attorney, Michael Cohen, obtained a secret restraining order in a private arbitration proceeding barring Daniels from disclosing ‘confidential information’ related to a nondisclosure agreement she signed in October 2016.

Her lawyer, Avenatti, revealed the text of the NDA when he filed a lawsuit in California arguing that the agreement was no longer operative because Trump never signed it and because, he argued, Cohen violated it by confirming its existence.

On social media, Daniels appeared to acknowledge an alleged affair with Trump.

She tweeted on Tuesday that the future president ‘lied’ and ‘broke the law’ to cover up their affair.

An online critic wrote that Daniels should ‘disappear’ because ‘[n]o one cares you were a slut and slept with POTUS 12 yrs ago.’

She responded: ‘Technically I didn’t sleep with the POTUS 12 years ago. There was no sleeping (hehe) and he was just a goofy reality TV star.’

‘But I digress…People DO care that he lied about it, had me bullied, broke laws to cover it up, etc.,’ she added.

‘And PS…I am NOT going anywhere. xoxoxo.’ 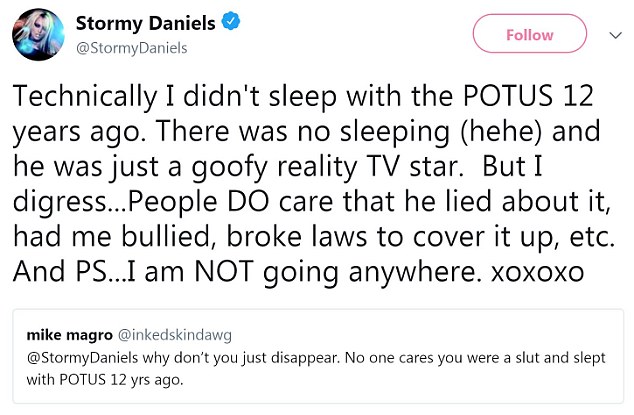 On social media, Daniels appeared to acknowledge an alleged affair with Trump. She continued her weeks-long needling of Trump, saying that she’s ‘NOT going anywhere’

Clifford’s lawyer claimed earlier in the day that she had passed a polygraph exam in May 2011 on the subject of whether she had bedded Trump.

Polygraphs, commonly called ‘lie detector’ tests, don’t measure the truth of what a subject says. Instead they track changes in heartbeat, breathing, perspiration, blood pressure and other indicators that proponents describe as evidence of deception.

NBC News reported Tuesday that Clifford was asked by ‘Life & Style’ magazine to submit to the test seven years ago when she offered to sell an exclusive story of her torrid affair with the future president.

The examiner who performed the test concluded that there was a 99 per cent chance she was telling the truth about having unprotected sex with the real estate tycoon.

The White House has said Trump denies every allegation of sexual misconduct against the president, including those lodged by Clifford.

Avenatti has argued that the NDA should be considered ‘null and void,’ and has blasted Cohen for ‘threats’ and intimidation of his client.