Sean ‘Diddy’ Combs delivered a heartfelt eulogy at his ex-girlfriend Kim Porter’s funeral, touching on how they first fell in love and revealing that she had helped him battle depression earlier this year.

Porter, 47, was laid to rest next to her mother after an emotional funeral in Columbus, Georgia on Saturday.

Diddy, 49, spoke for nearly 18 minutes as he paid tribute to the mother-of-four, crediting her with teaching him how to love.

‘Anybody who knows Kim, she’s just a person you vibe with, you know? I can’t put your relationship into a certain box,’ Diddy told the crowd, which included Usher, Mary J Blige, and Missy Elliot.

‘She always told me, she felt like God sent her here to help me out. I’d be like “Girl, what are you talking about,”‘ he continued as everyone laughed.

‘I didn’t really understand how to love, I mean. We went through some circumstances, we didn’t have a big family and all that and she just really started breaking down the exterior in me and the shell that I put up.’

Diddy then revealed that he was ‘really depressed’ at the beginning of the year, and that Porter helped him through the darkness.

Devastated rap superstar, Sean ‘Diddy’ Combs appeared deep in thought as he took a lone stroll at Evergreen Memorial Garden Cemetery on Saturday. The mother of his children Kim Porter, 47, who died after battling the flu, was being buried alongside her mother Sarah Porter who passed away in 2014 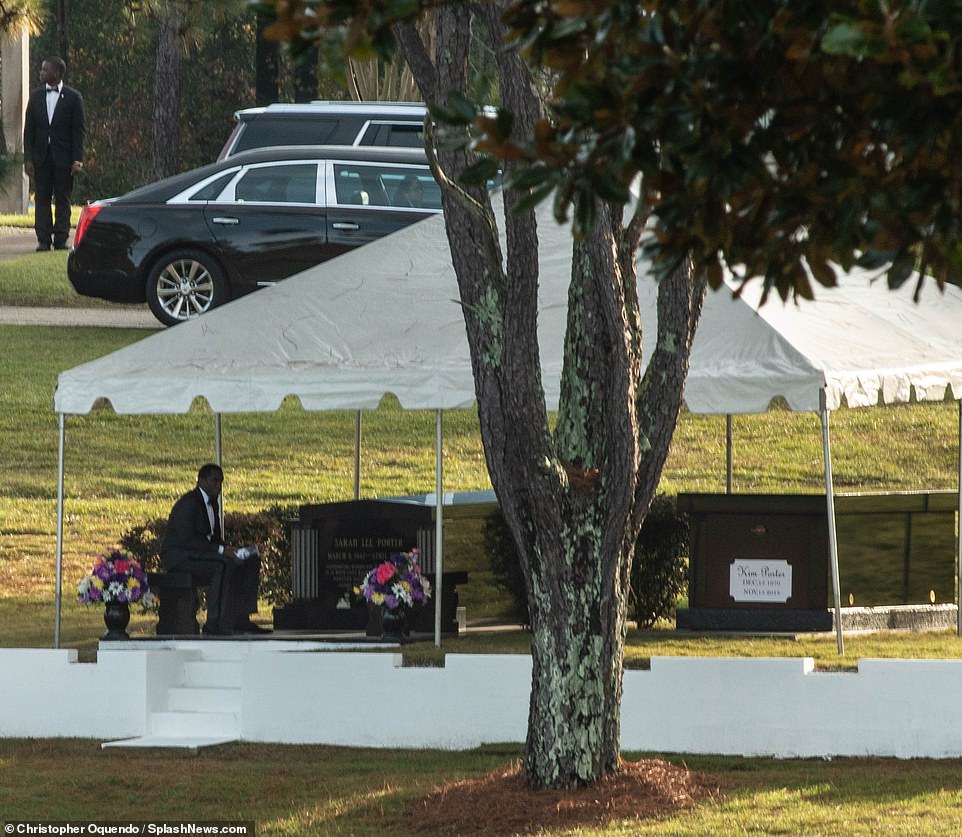 ‘I was getting older, and I just went through a dark, dark time,’ he said. ‘And even though we wasn’t together, she was that type of person.’

Diddy then asked the crowd to say ‘up’ with him.

The fashion mogul also told the crowd about the first time he saw Porter during a recording session at Uptown Records in the early 1990s.

‘God, I hope one day I get me a girl like that,’ Diddy recalled thinking to himself at the time.

‘I would come into the office every day and she worked at the front desk,’ he continued. ‘And I would be so excited to come up in the elevator. To know that I was going to see her.’

Diddy revealed that him and Porter started as friends, and that even from the beginning she was his ‘confidante’.

‘She was like my guidance, still is,’ he said. ‘I was just open. We fell in love and honestly, her love was too much for me to handle. It was a lot to handle, to take in.’

‘As time went on our relationship took so many changes from being boyfriend and girlfriend, to being lovers, to being best friends. To being just straight up homies, like, someone you know you can count on. Somebody that has your back, you have their back.’

While Diddy did not break down during the ceremony, at one moment he stopped and said: ‘We didn’t really plan for this’.

‘I definitely thought I was going to go first,’ he continued. ‘God didn’t have it be that way.’ 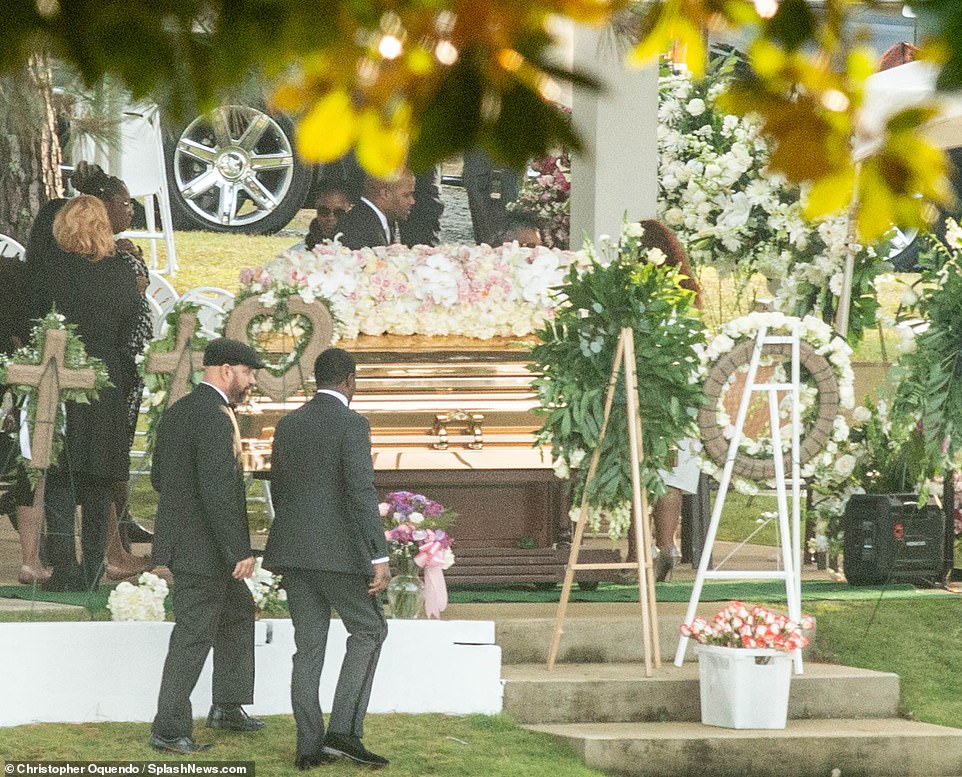 Kim Porter was laid to rest in a flashy golden casket Saturday. Sean ‘Diddy’ Combs was pictured as loved ones paid their respects

Diddy then addressed the three children he shared with Porter, Christian, 20, and 11-year-old twins Jessie James and D’Lila, as well as Porter’s firstborn Quincy Brown, 27.

‘Your mother instilled in me this, and I pledge in front of everyone now, I will always be there for y’all,’ he told his children.

Diddy then called Kim ‘irreplaceable’ but told the crowd he was sad – not scared.

‘I’m hurt,’ he said. ‘But I don’t feel she left. I’m not like, “Oh, she’s not here”. People leave in the physical. But their energy, their vibration, their frequency, it lives on forever.’

He then thanked the crowd for coming before addressing Porter herself.

‘I know you like to talk to me a lot once you get on those rants,’ he added as the crowd laughed.

‘I just want you to know, I’m going to be listening,’ Diddy continued. ‘We love you, we appreciate you, to all the words I’m forgetting, to everything I’m forgetting to say, we love you Kim. Thank you.’

Hours after the funeral, Diddy shared a touching tribute to Porter on Instagram.

Diddy called Porter the ‘truest definition of a mother’ as he shared a montage of videos and photos of her on the post, which has been viewed more than two million times. 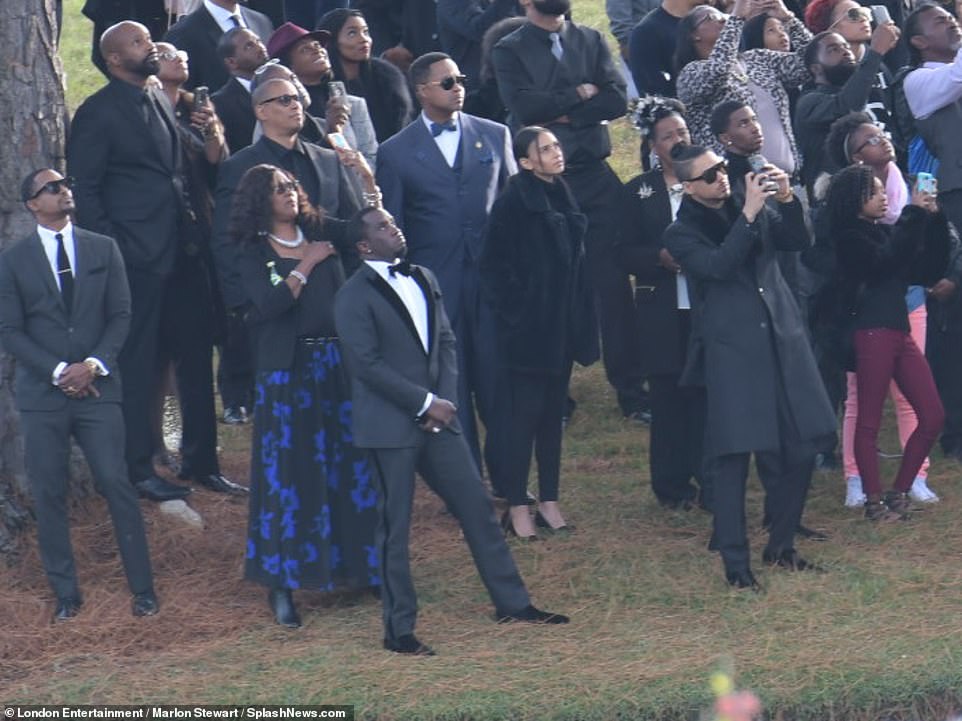 Attendees watched a fireworks display before Porter was put to rest. While some took out their cameras, Diddy somberly watched the display

The first clip showed Porter playing patty cake with her daughters in the ocean while the sun set behind them, sweetly giving one of them a kiss.

Another video shows her holding hands with her daughters before they all fall back into the sea together.

The montage also included pictures, which appeared to be from the same vacation, that showed Porter smiling and watching her two girls from the water, lying on a beach chair with a friend, and jumping in the air with her daughters by the beach.

Diddy’s immense heartbreak was clear as he laid Porter to rest in a gold casket on Saturday.

At several points Diddy had to take time out alone from the ceremony to collect himself and gather his thoughts.

One photo showed Diddy sitting by the headstone of Porter’s mother Sarah Lee Porter, who passed away in 2014, clutching a program for the service and wearing a somber expression on his face amid the proceedings.

Singer Usher Raymond gave Diddy a hug as they stood near where Porter was to be buried.

Quincy broke down as he spoke and was joined at the mic by his father Al B. Sure!, and Diddy. 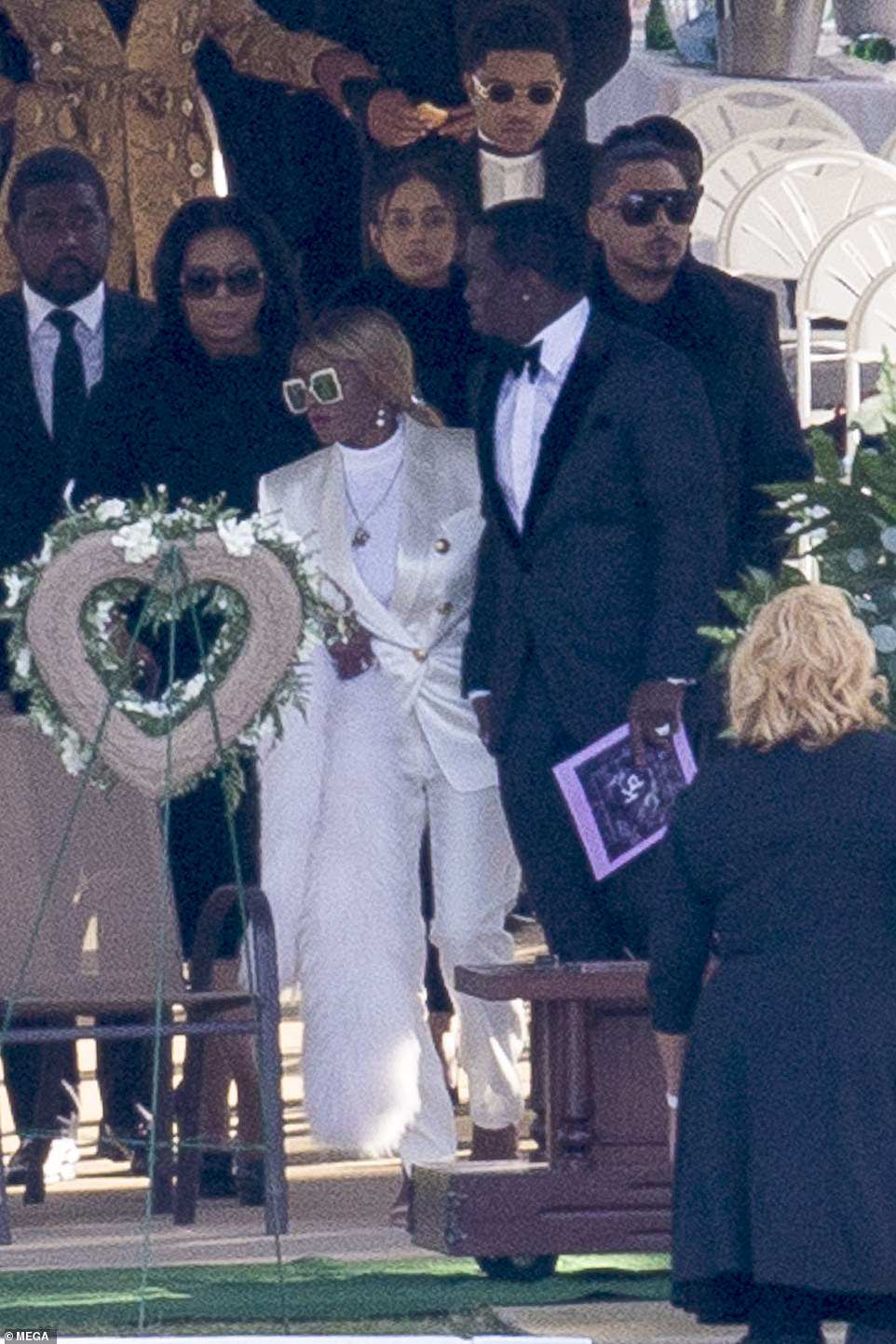 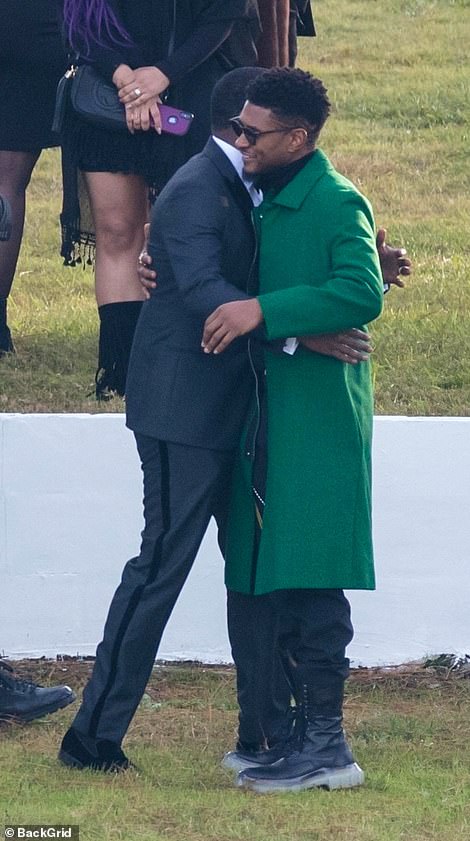 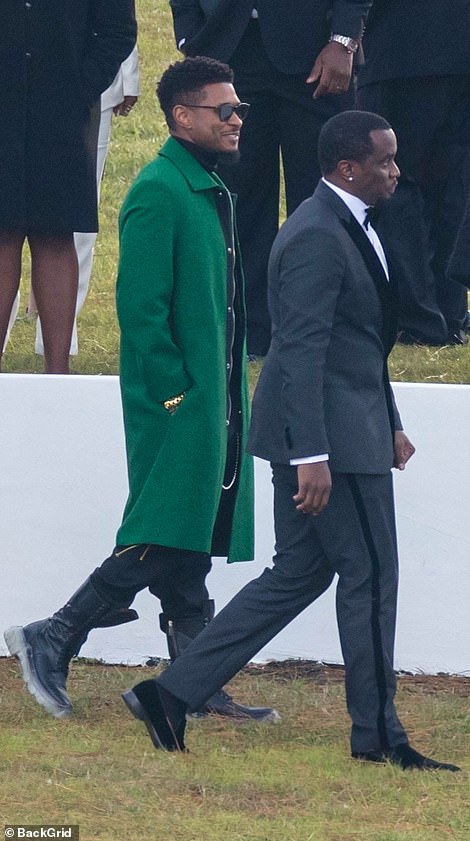 Diddy’s son Christian ‘King’ Combs – who has followed in his mother’s footsteps by becoming a model – was present.

The funeral for the 47-year-old started at 11am. The procession headed to Evergreen Memorial Park to lay Porter to rest and the tune What’s Going On, by Marvin Gaye, played as they left and fireworks were shot at the site. 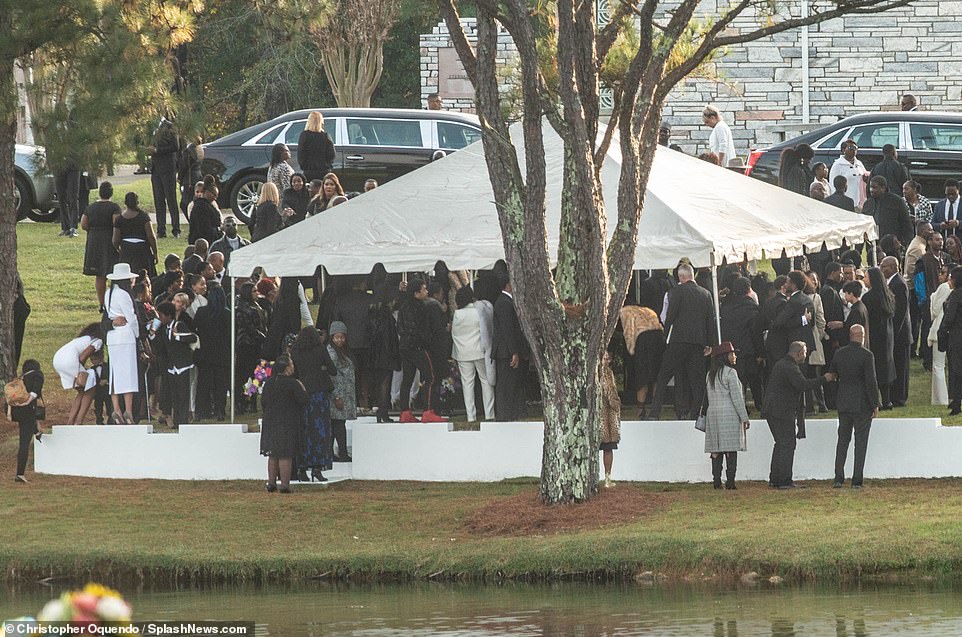 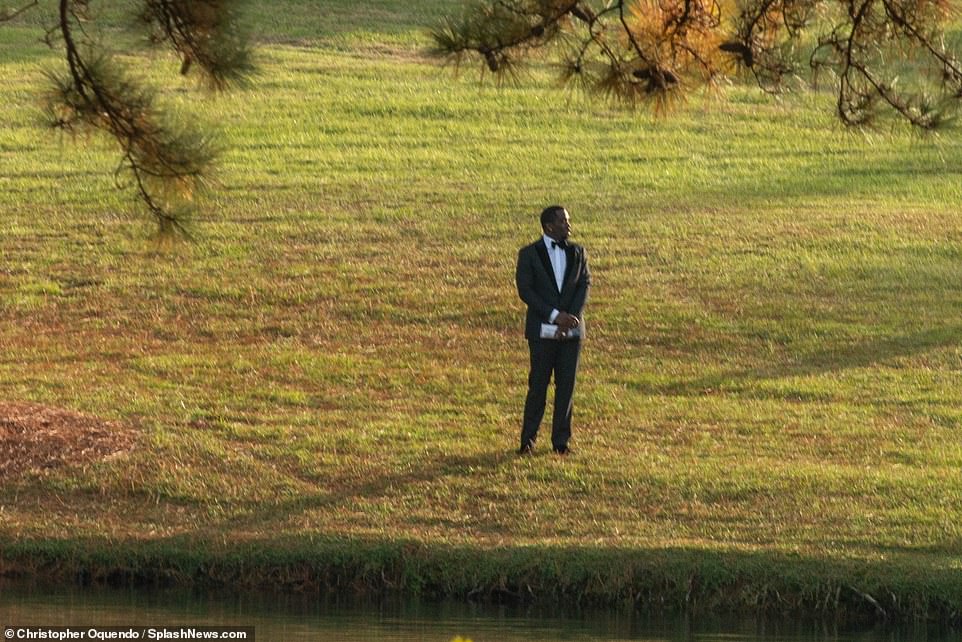 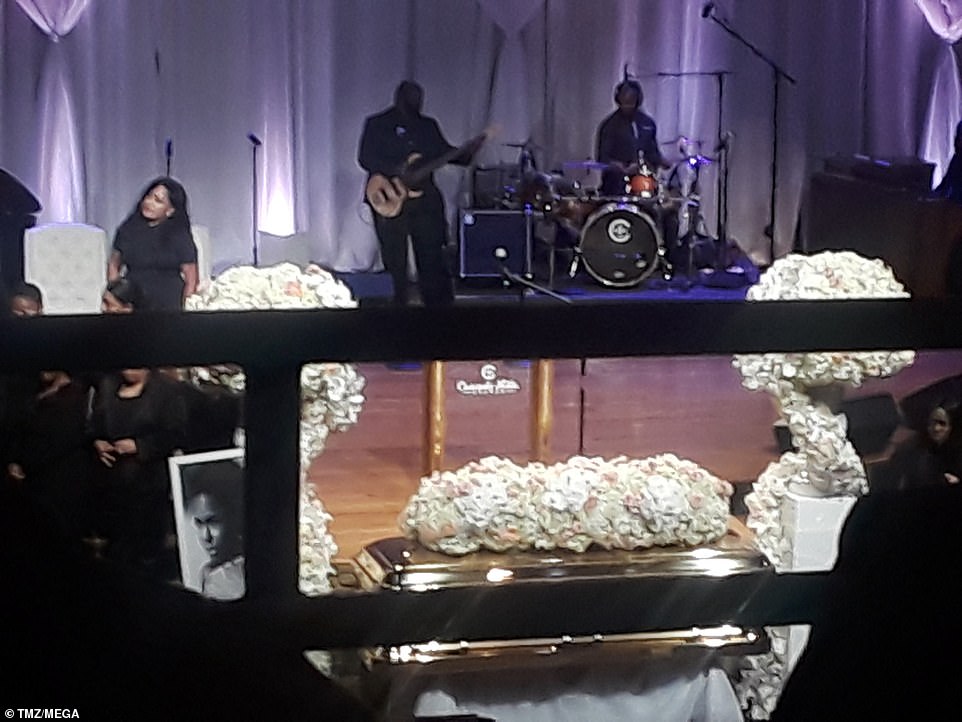 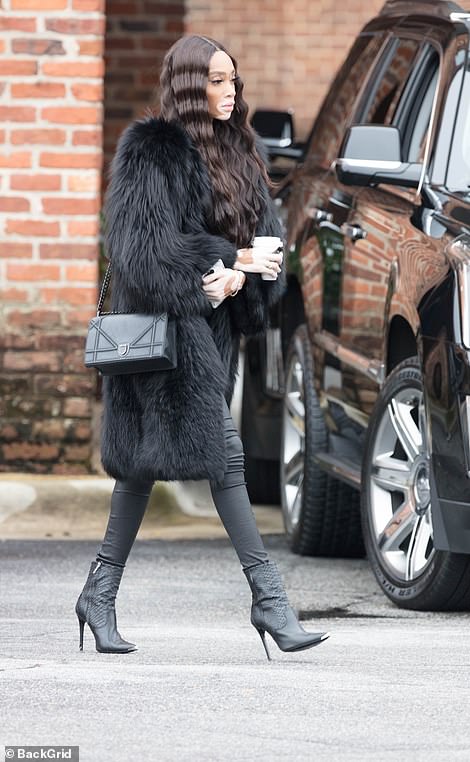 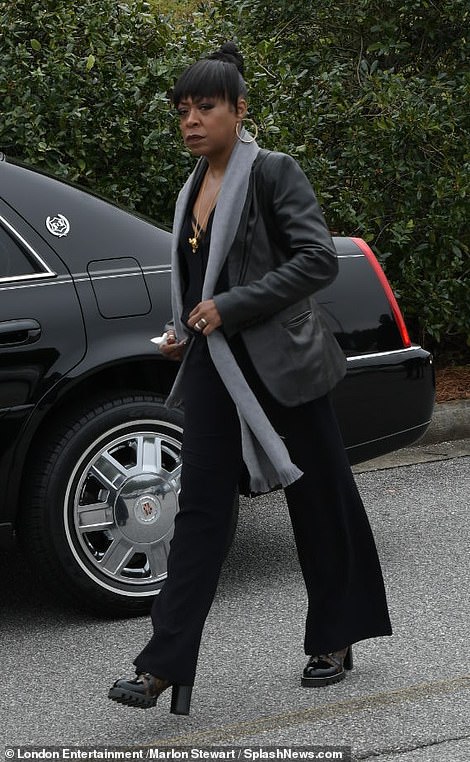 Porter’s casket was topped with beautiful bouquets of flowers. A black and white photo of her sat in the homegoing service and a band played behind the casket. Chairs and other accessories were all white.

Singer Faith Evans is said to have performed His Eye Is On The Sparrow while gospel legend Yolanda Adams sang Just A Prayer Away.

There had been speculation on whether Diddy would deliver the eulogy as he was said to be in a ‘fragile emotional state’.

Diddy took to his Twitter to share a heartfelt message about Porter an hour before the service.

‘Today we lay to rest our ANGEL,’ he wrote. ‘Her spirit lives on with us FOREVER!!! We thank you all for your prayers and support. You have no idea how much it means to us. We thank GOD for all of you. #KimPorter.’ 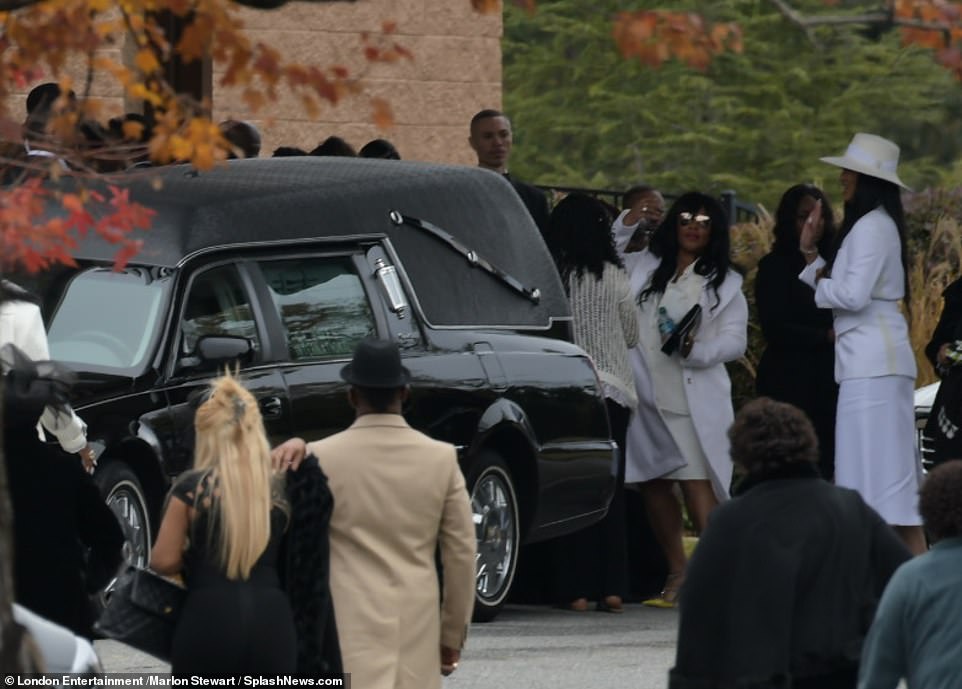 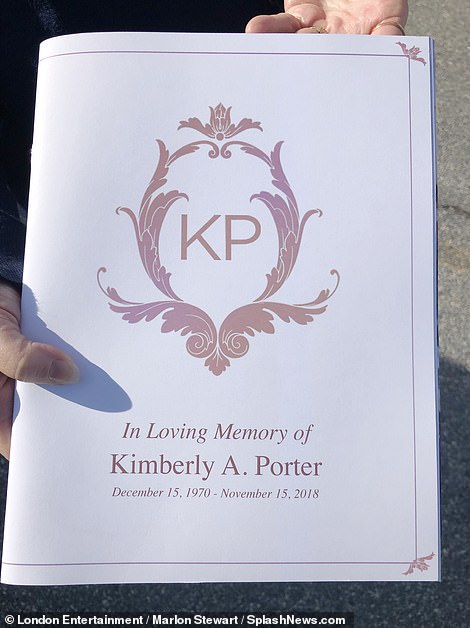 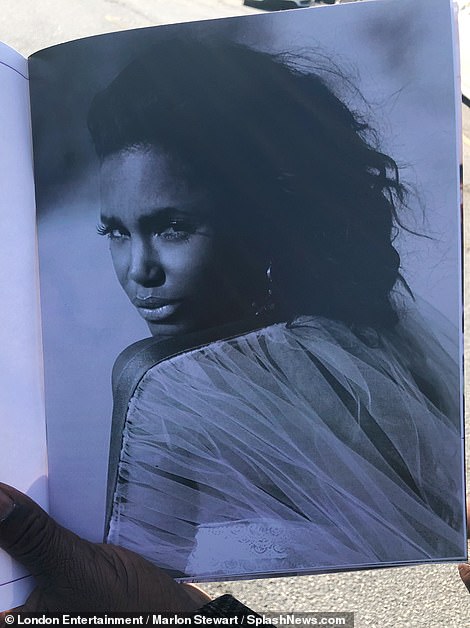 Kim Porter’s obituary was also white and adorned with rose finish. It included many glam shots of the formal model 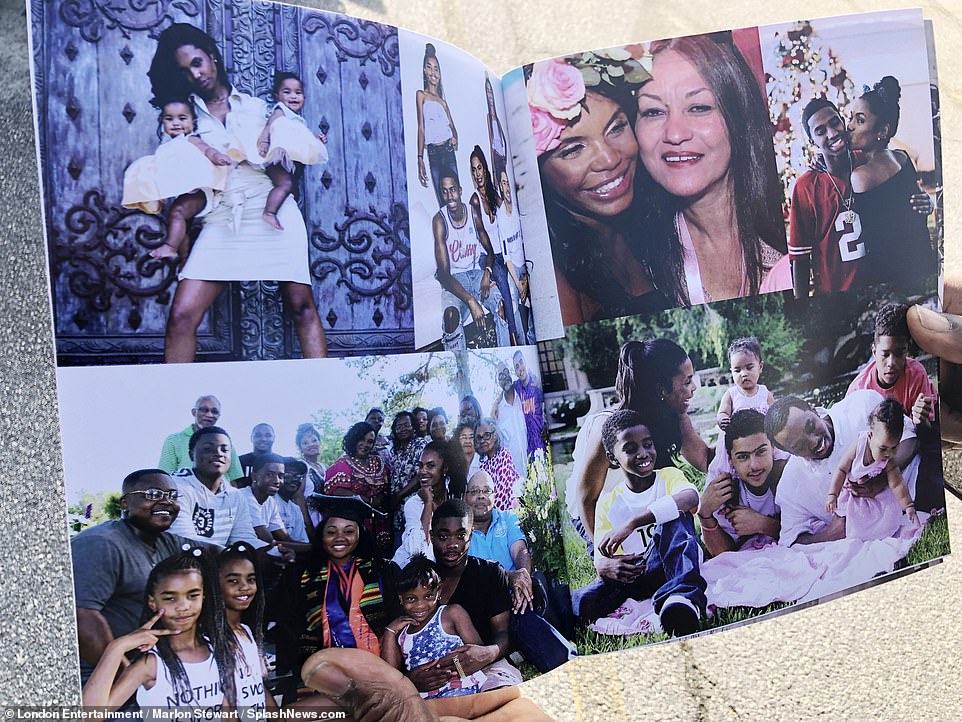 Sharing images of the model in her younger years she wrote: ‘Heaven couldn’t wait for you.’

TV Pastor T.D. Jakes also posted a tribute on Twitter: ‘I’d like to offer love & condolences to @Diddy and his entire family, as they traverse the tragic loss of Ms Kim Porter.’

‘The beauty of love is that it knows no limits; not even death can contain the love established during her life. May God’s grace guide you through this time.’

The number of mourners in attendance was estimated to be between 1,200 to 1,500 loved ones.

Porter died last Thursday after suffering from a bout of pneumonia but her exact cause of death is unknown. 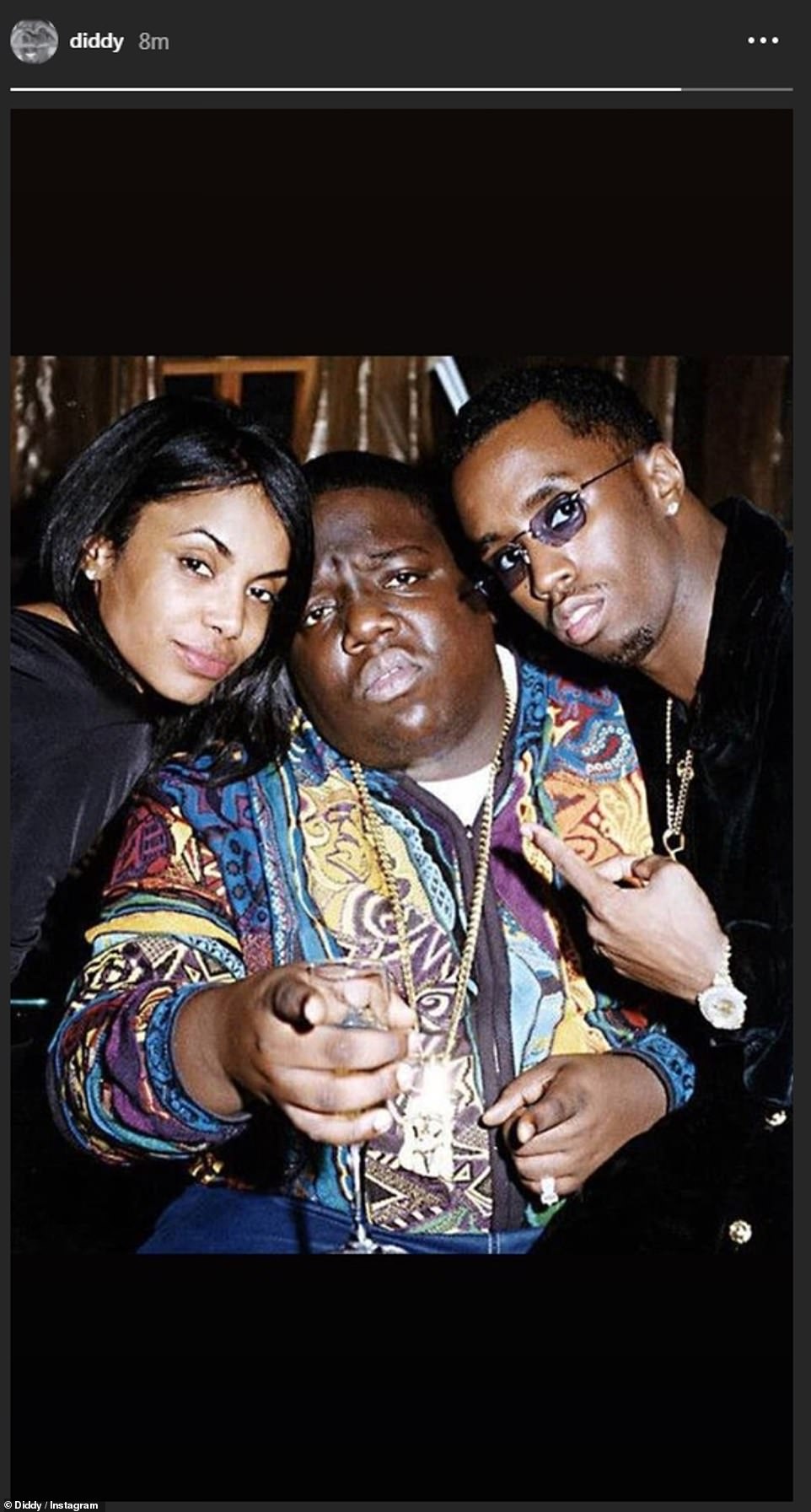 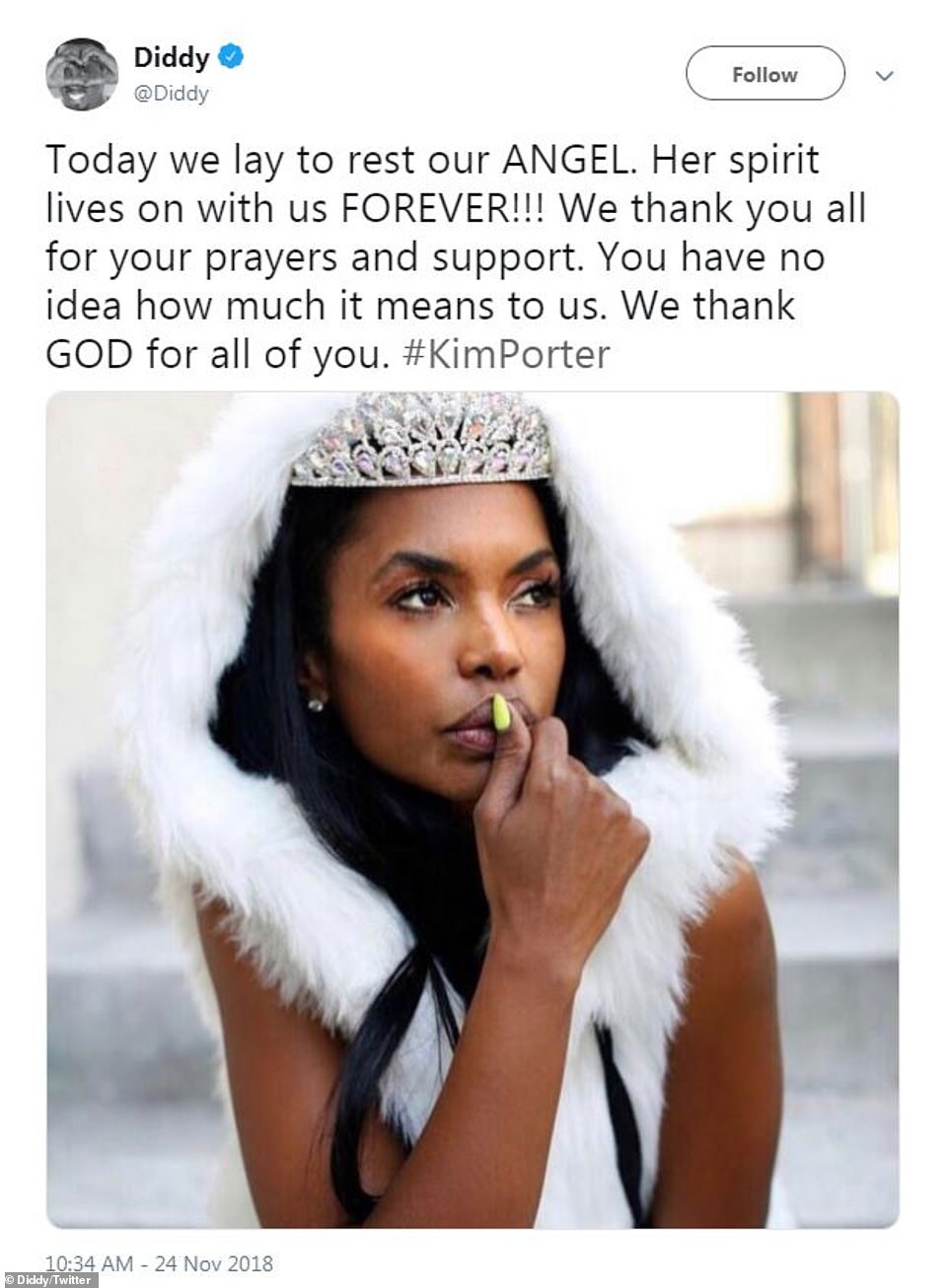 He said: ‘Today we lay to rest our ANGEL. Her spirit lives on with us FOREVER!!! We thank you all for your prayers and support. You have no idea how much it means to us. We thank GOD for all of you. #KimPorter’

Diddy – along with sons Quincy Brown and Christian Casey Combs – were seen leaving the service.

The couple had been on and off for 13 years and, following their split, continued to co-parent their children and remained like family with one another. 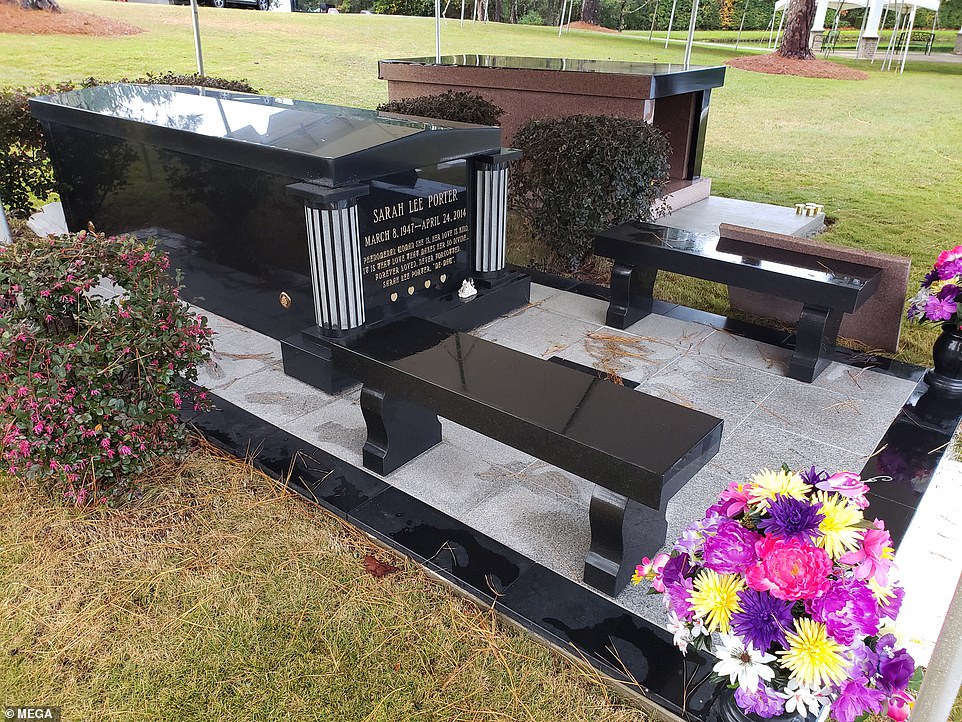 Kim Porter will be buried next to her mother, Sarah Lee Porter, who died in 2014

This weekend Diddy shared a statement on the mother of his children.

‘God broke the mold when he made Kim, there was truly no other woman like her,’ the statement said. ‘Although her time here on earth was far too short, she lived a life full of purpose and meaning. She was a loving mother and devoted friend.’

‘She was the epitome of kindness and grace. There wasn’t a person she met who’s soul she did not touch. Kim was the type of woman who changed lives for the better. Although we’ve lost our best friend, God has gained a special angel and we know she is watching over us.’