Dido is the superstar who vanished from sight. She has sold as many records as Adele, won countless awards and performed all over the globe to millions. But at the height of her fame, she slipped away to live a life as far removed from the camera lens as possible.

Now, after the release of her latest album, Still On My Mind, she is embarking on a world tour for the first time in 15 years – but she is evidently avoiding any fanfare. Even her entrance to a London recording studio is low key. She arrives on her own, clutching a Tupperware box of sliced vegetables and a flask of spinach and watercress soup.

‘I have no problem living a very ordinary life,’ she says, twisting open the lid of her soup. ‘Very occasionally someone will come up to me and say: “You look a bit like that singer called…” and she mimics a confused look and a click of the fingers. ‘And most times they don’t even remember the name, so I smile and get on with what I’m doing.’ Dido, who travels by public transport, hangs out unnoticed in London parks and cafes with her seven-year-old son Stanley, and has never seen the sharp end of a Botox needle, has perfected the art of the celebrity disappearing act.

This seems an extraordinary state of affairs – and not just because her name, Dido Florian Cloud de Bounevialle O’Malley Armstrong, is pretty unforgettable. She has sold more than 40 million records, won four Brit Awards and had several Grammy nominations. In 1999, her debut album, No Angel, was making her £1 million a month (her current bank balance stands at about £14 million). Even her hair was given its own Wikipedia page – Dido flip.

But it was her appearance on Eminem’s multi-platinum-selling song Stan in 2000 that really put Dido on the map. The juxtaposition of the quiet product of a British middle-class literary family with the controversial, tattooed rapper gave a radical new twist – and an even bigger audience – to her introspective folk music.

‘It happened by chance,’ she recalls. ‘Thank You had been used on the soundtrack of [the 1998 Gwyneth Paltrow movie] Sliding Doors and a producer in America heard it. He literally taped it off the telly and sent it to Eminem, who then put it into Stan without knowing who I was. We met later and he asked me to do the video, which was terrifying [it was banned as it features Dido being gagged and placed in the boot of a car] because I’d never acted before, as you can tell from watching it.’ 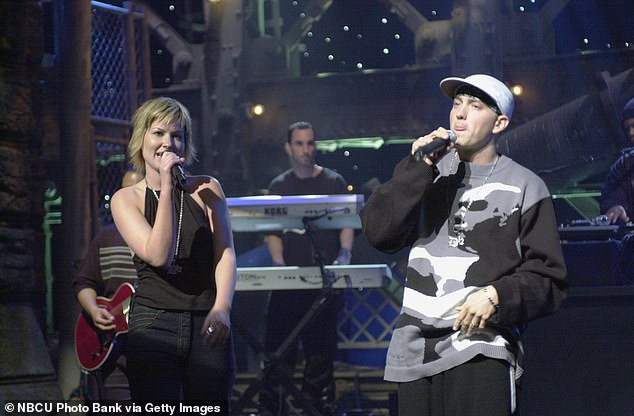 Dido with Eminem on Saturday Night Live, 2000. The juxtaposition of the quiet product of a British middle-class literary family with the controversial, tattooed rapper gave a radical new twist – and an even bigger audience – to her introspective folk music

By the end of 2003, Dido was the world’s best-selling female artist with a string of hits, including White Flag and Life For Rent. She toured the globe non-stop before dramatically putting the brakes on her career. To many it seemed like she had disappeared.

But her removal from fame was deliberate. ‘I needed to come home,’ she says. ‘My father was ill and there were more important issues going on than my career.’

‘I wanted to be home where I could go and see my dad every day. That was more important than anything. When you have lupus you know you are going to die, so we all had time to be with him, to say everything we wanted, but death still comes as a shock.’ She was singing one of his favourite Irish songs to him, Raglan Road, when he passed away in 2006 aged 69, just three days before Dido’s 34th birthday.

Her mother, Clare, is a poet, and Dido had a very unconventional upbringing in Islington, north London, as Armstrong didn’t allow her daughter, now 47, or her elder son Rollo, 52, to watch television or bring friends home. She would open her lunch box away from the eyes of the wealthier kids at the fee-paying Westminster School as they often contained leftovers from dinner the night before.

Both she and Rollo became obsessed with making music. ‘We were both very geeky. My brother wrote a novel when he was 14 so I had to match up to him. We read non-stop, and if he was reading War And Peace I’d read it too. We didn’t know any different because that was our life.’

It was the glitzy soap opera Dallas that started her rebellion. As a teenager she would cycle round to friends’ houses to gawp at it on TV, opening her eyes to a bright new world. At 15 she discovered gigs and clubs, and by 16 had left home and moved into a friend’s house.

‘It was my wild period of going out clubbing and dressing in Doc Martens and any outfit I could put together from the Oxfam shop. I dyed my hair every colour, ruined a lot of towels. I was obsessed with Spandau Ballet and Paul Young. I do everything to extremes, so that was my drinking phase, but within a few years I’d got it out of my system.’

After her father’s death, she flew to Los Angeles. ‘I went for a few weeks to give myself space to think about my dad and that turned into two years,’ she says. The only music she could write were songs about her father. ‘The songs were so personal. I performed them only once in Los Angeles and it was too hard.’

This music became the basis of her third album, 2008’s Safe Trip Home, which didn’t have the impact of her previous releases as ‘I couldn’t face touring to promote it’. One track, Grafton Street, is about her daily visits to watch the sunsets with her father, warming his hands with hers. Dido says it’s so poignant that ‘I could never perform it in public’.

While in Los Angeles she met and married her husband, the author Rohan Gavin, and in 2011 gave birth to their son Stanley (‘and no, he’s not named after Stan’). By the time of her fourth album, 2013’s Girl Who Got Away, she still wasn’t ready to promote her music. ‘The moment Stanley was born, I knew I just wanted to be with him.’

Surely there must have been intense pressure from her record company to go on tour to help lift the sales of these albums. ‘I couldn’t do anything if I was pressurised. That has never worked for me,’ she says, before stopping to tell a story that illustrates her attitude to money and pressure.

‘In the very early days, when I was just making music and performing in little places, I got signed by a management company. I’d had no money for most of my 20s, so I was used to living on next to nothing. Then I was given a cheque so I could focus on just writing music. It was for a few thousand pounds, which was not a huge deal to them but it was massive to me. I couldn’t bank it. It sat on the table by my bed and every time I looked at it I panicked. I had anxiety attacks, I got really down. I felt that cheque represented pressure and that it would turn my music into something different. Growing up, music had been my special place, a private place for me, my brother, my dad. I literally got myself into a complete state because of that cheque. I’ve always known money could never be a motivation for me.’ 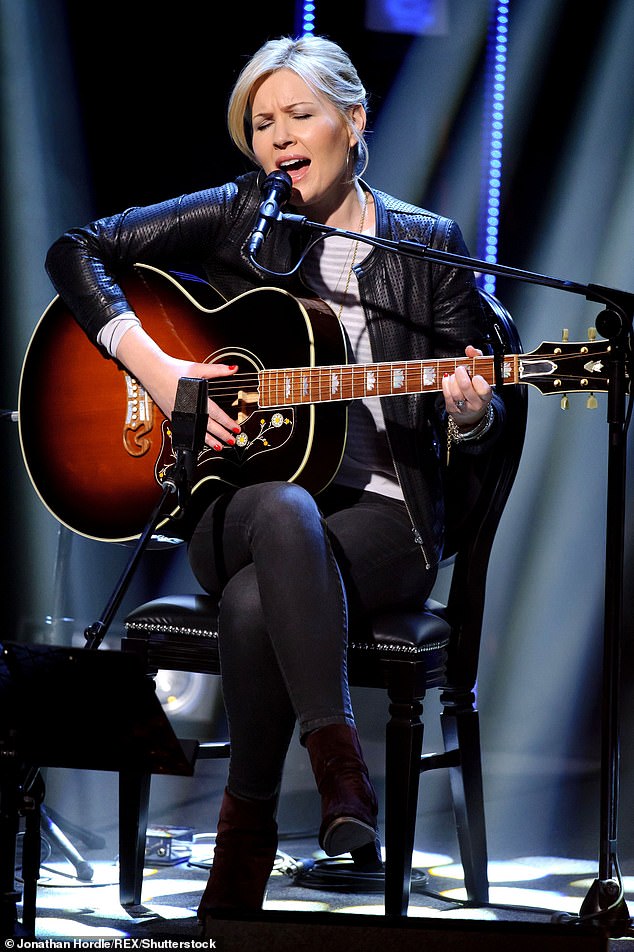 Dido’s latest album is a collaboration with her brother Rollo, who has gone on to produce music for U2, Suede and Pet Shop Boys

Given her wealth now, how does she cope? ‘Well I don’t buy cars or big things,’ she laughs. Instead she has bought freedom, which has allowed her to hold off writing a new album for six years. She has spent that time with Stanley and her husband, ‘just being a family’. Television is not banned, but ‘we go out a lot, we talk a lot’. Her money is spent on ‘experiences’ with her family.

‘The benefits of having money are being able just to get up and go to the Grand Canyon because you all really want to see it. And then to be able to talk to your son and your husband about it for years afterwards.’

Dido’s latest album is a collaboration with her brother Rollo, who has gone on to produce music for U2, Suede and Pet Shop Boys. And this time, despite a ‘huge amount of nerves’, she will promote it by touring. ‘It feels like the right time,’ she says, ‘and Stanley is young enough to come with me.’ This was key to her decision to step back into the limelight. He will travel with her, to share the experience.

As she prepares to leave, she tells a final story about the only man who managed to persuade her to get on a stage in the past decade – her unlikely friend Eminem. ‘I got a call asking if I’d perform on stage at Reading with him in 2013,’ she says. ‘I thought about it. My life was totally domestic but there’s still always music playing or in my head. I left in the morning, got in my car and drove to Reading. I parked, walked on stage just as he was about to start Stan and began singing. The crowd went absolutely wild and it was this bizarre but brilliant experience. As soon as the song finished, I walked back off stage, got in my car and drove home, played with Stanley, put him to bed and got on with my life. Perfect.’

‘Still On My Mind’ is released on March 8. Dido tours the UK from May, didomusic.com