Apple fans lined up at stores across the country and around the world Friday to get their hands on the new iPhone XS and XS Max.

The new models featuring improved battery life and faster processors and offered in gold, silver and space grey were unveiled earlier this month, billed as Apple’s most advanced iPhone yet.

The XS has been crowned Apple’s fastest-selling smartphone to date – despite the fact that it’s starting price is a proud $999.

The most expensive iPhone of all time – the $1,449 512GB XS Max – sold out in its space grey and gold finishes in under half an hour last week.

Despite the new models’ popularity, stores throughout the US experienced significantly less fanfare than with previous launches because the phone has been available for pre-order and customers could reserve a time slot to collect their new gadgets.

Hundreds of Apple fans lined up Friday to get their hands on the new iPhone XS and XS Max. Pictured: A long queue at an Apple store in Midtown Manhattan the morning of the release 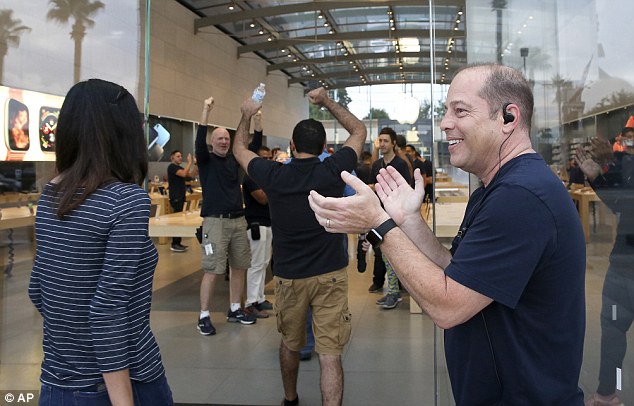 Customers receive a warm greeting at an Apple store in Houston, Texas, the morning the iPhone XS and XS Max hit the shelves 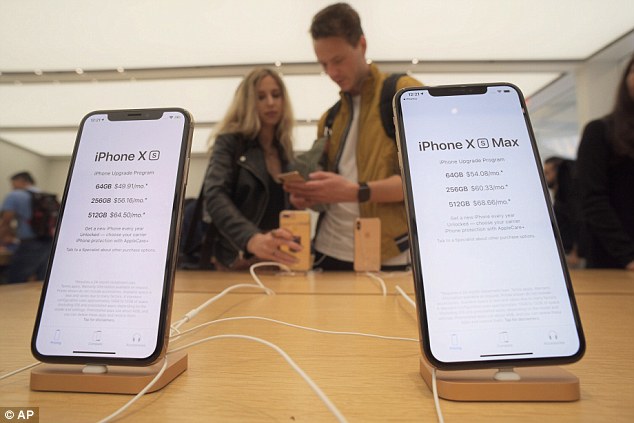 Customers were photographed arriving at Apple locations across the US Friday, greeted by staff bracing for a long and busy day.

A line of excited customers snaked down the sidewalk in front of Apple’s location in Midtown Manhattan as employees inside the crowded store handed out the phones as quickly as possible.

In Paramus, New Jersey, new iPhone owners were seen checking out their purchases outside the store.

At another store in Houston, Texas, managers were seen hyping up staff before the doors opened for the day.

Customers were greeted by a wall of applauding employees as they entered. 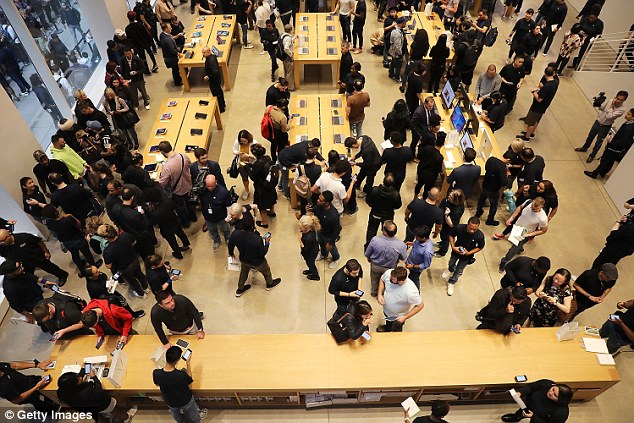 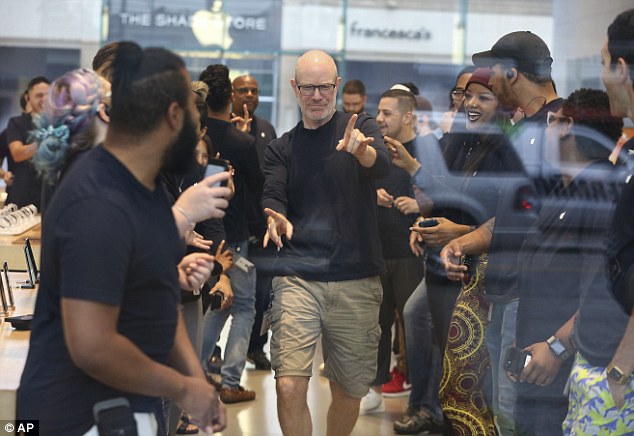 Staff at an Apple store in Houston, Texas, are shown as they prepare to open the doors Friday 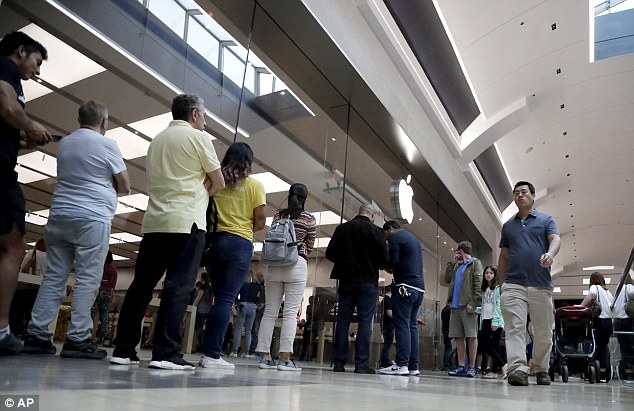 Customers queue in front of an Apple Store at the Garden State Plaza in Paramus, New Jersey 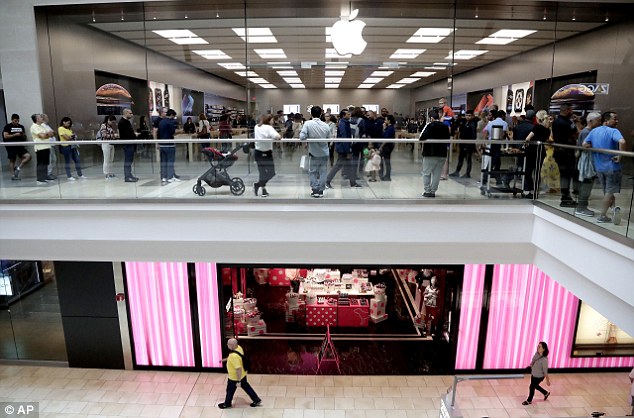 Stores outside the US reported much larger turnouts, with especially impressive crowds seen in Sydney, Tokyo and Shanghai.

Across the pond in London, customers began queuing in front of an Apple store on Regent Street as early as Thursday afternoon.

‘I just came really early, I was here at half past one in the afternoon,’ the first customer to buy the new phone explained.

‘It’s gold, what’s not to love?’ said another customer who participates in the ritual each year, waiting an hour in the pre-order queue. 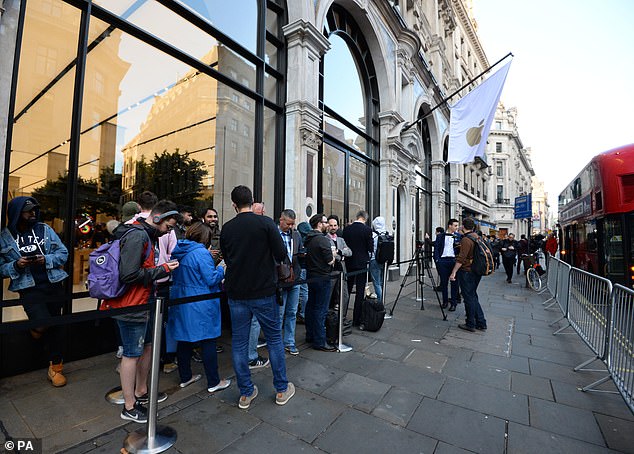 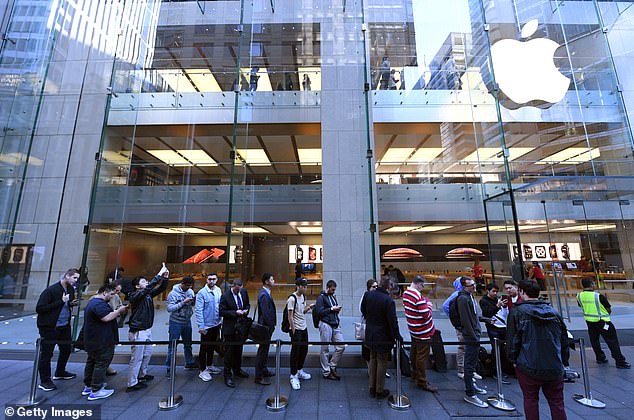 Customers wait outside an Apple Store in Sydney, Australia, ahead of the XS launch Friday 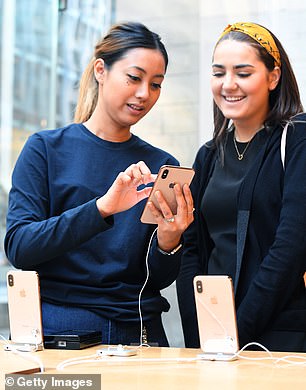 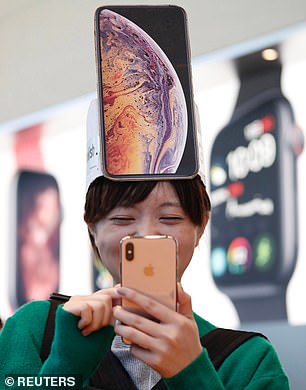 An Apple staff member shows a customer the new iPhone in Sydney (left), while a woman excitedly tests out her new device in Tokyo (right) 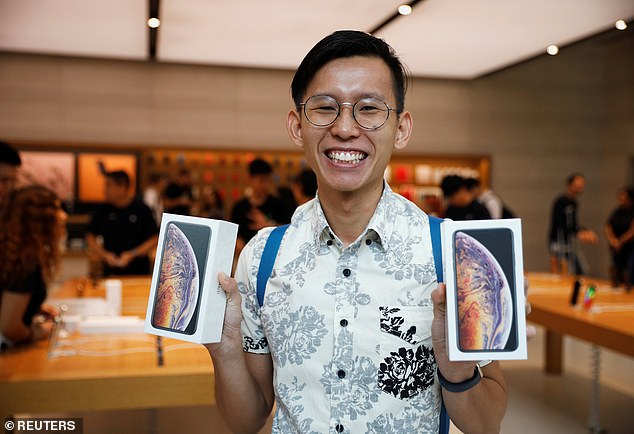 Daniel Lim, 23, was the first in line to buy the newly released iPhones at a Singapore location 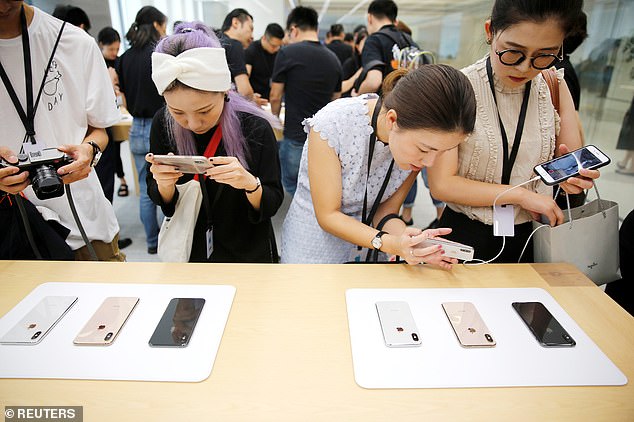 Last Tuesday, Apple took the wraps off of the $999 5.8-inch iPhone XS, a device that CEO Tim Cook said is ‘by far the most advanced iPhone we have ever created’.

The tech giant also unveiled a more affordable model – the 6.1-inch iPhone XR at $749 – in a bid to ensure their devices ‘reach even more customers’. The XR will be available next month.

Pre-orders for the XS began shipping Friday in select markets, including the US and UK, with more locations set to be added on September 28.

The phone is flying off the shelves despite people mocking its eye-watering price this week, with social media users joking that Apple should have named its new flagship handsets the ‘excess’ and ‘excess Max’. 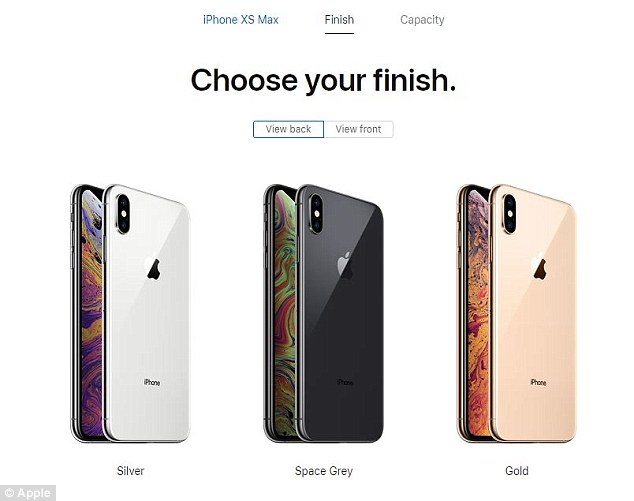 Customers have been snapping up the iPhone XS and XS Max (pictured) since pre-orders kick-started at 8:01am BST (3:01am ET) on Apple.com/UK and on the Apple Store iOS app 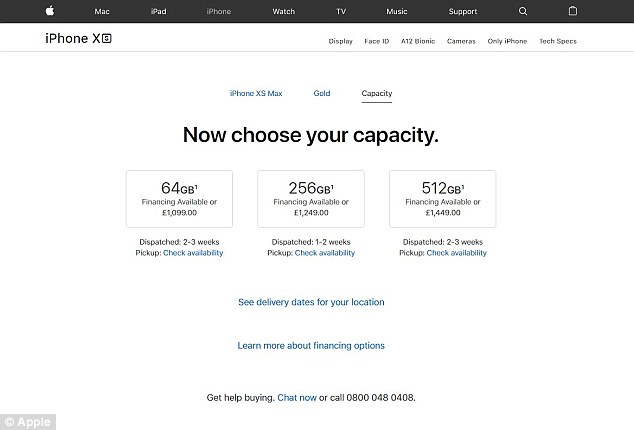 Apple has launched pre-sales for its hotly-anticipated new flagship smartphones. The most expensive iPhone of all time – the £1,449 512GB XS Max (right) – sold out in its silver and gold finishes in under half an hour

Rumors had suggested that Apple would be having an ‘S’ year this time around, with most of the upgrades focused on specs instead of looks, which proved to be mostly true.

Both the iPhone XS and XS Max take a page from the 10th anniversary iPhone X in their design, featuring edge-to-edge organic LED screens, slimmer bezels and facial recognition technology that replaces the home button.

That doesn’t mean the devices fall short on upgrades, however.

‘These are incredible new iPhones,’ said Phil Schiller, Apple’s senior vice president of worldwide marketing. ‘The best iPhones we’ve ever made by a long shot.’

Apple says the phones are ‘more waterproof’ than their predecessors and the cameras are ‘better than ever before’.

The XS and XS Max feature some significant display upgrades. The 6.5-inch iPhone XS Max has a Super Retina display and a resolution of 2,688 x 1,242.

Both phones have improved speakers, a 120Hz refresh rate and Face ID is now speedier, thanks to new algorithms, allowing users to more quickly unlock their device with just their face.

Schiller called this version of Face ID the most secure facial authentication in a smartphone ever. 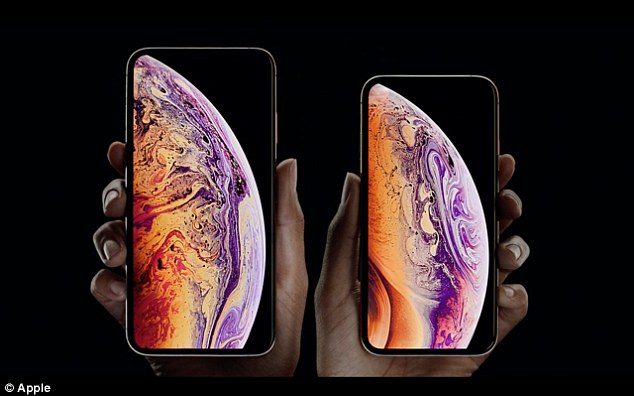 Along with that, Apple introduced an improved ‘bokeh’ effect, which adds a blur in the background of portrait mode photos.

Apple says this smooths out the transition from foreground to background and better defines background shapes.

Apple has bolstered the batteries loaded into each phone too.

It claims the iPhone XS runs for half an hour longer than last year’s X, while the XS Max lasts an additional 1.5 hours.

The iPhone XS and iPhone XS Max are shipping in 64GB, 256GB or 512GB — the largest in-built storage ever shipped on an Apple-branded smartphone.

Apple’s newest phones are equipped with faster processors and better memory capacities than ever before, relying on Apple’s new, super fast A12 Bionic chip.

The A12 chip is made up of a six-core CPU, which contains two ‘performance’ cores and four ‘efficiency’ cores.

It’s also packed with a four-core GPU that Apple says is ’50 percent faster’ than the A11 Bionic chip.

On top of that, the phones feature an upgraded Neural Engine, which powers everything from the iPhone’s augmented reality features to its dual-lens camera. 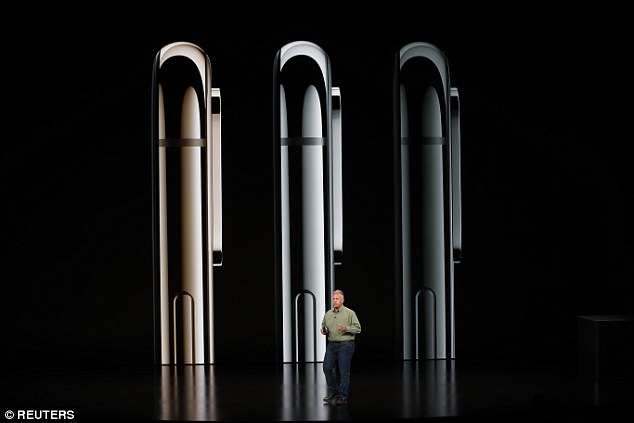 The iPhone XS and XS Max are now able to open apps up to 30 percent faster thanks to the A12 Bionic chip. It will also power improvements in AR, Memoji and Siri shortcuts 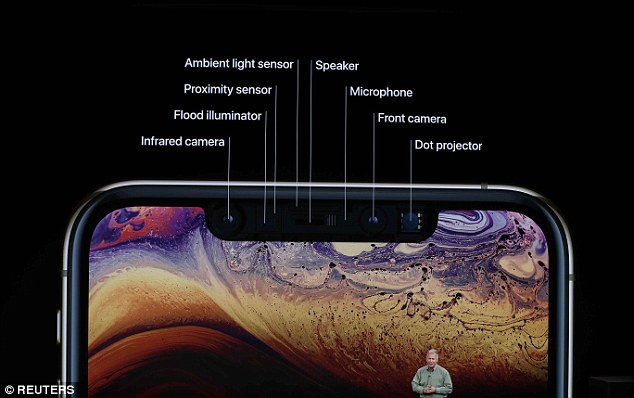 The iPhone XS and XS Max have 12 megapixel cameras with bigger sensors and an improved high-dynamic range imaging, which results in better lighting and photos with deeper colors

The Neural Engine gets a bump up to eight cores, an upgrade from its previous two cores, and can also handle a staggering 5 trillion operations per second.

The iPhone XS and XS Max are now able to open apps up to 30 percent faster thanks to the A12 Bionic chip.

It will also power improvements in AR, Memoji and Siri shortcuts.

Another update that may have gotten lost in the fray is that Apple is adding dual SIM support for the first time ever.

That means both phones will support the use of two phone numbers and data plans, using a physical SIM card and an e-SIM card.

The feature isn’t available just yet, but will be enabled in a software update ‘later this fall.’

In China, where e-SIMs are barred, Apple will even ship a special version of the iPhone XS Max that’s equipped to handle two physical SIM trays.

Earlier in the event, Apple unveiled the Apple Watch Series 4, which marks a major step up from the Series 3.