A registered dietitian is revealing the cold hard facts about food and weight loss on TikTok, insisting people should never cut food groups, eat less than 1,200 calories a day, or fear sugar.

Leah Forristall, 26, from Massachusetts, has more than 73,000 followers on her @the.hiking.dietitian account, where she dispels common myths and misconceptions about healthy eating in her playful ‘Hard Truths from a Dietitian’ series.

‘There are a lot of misconceptions about nutrition. Food is personal, everybody needs to eat,’ she told Bored Panda, explaining that maintaining a proper diet is not black and white or one size fits all.

Keeping it real: Registered dietitian Leah Forristall, 26, from Massachusetts, has more than 73,000 followers on TikTok, where she dispels common nutrition myths and misconceptions 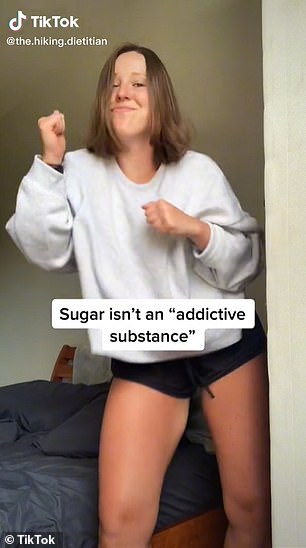 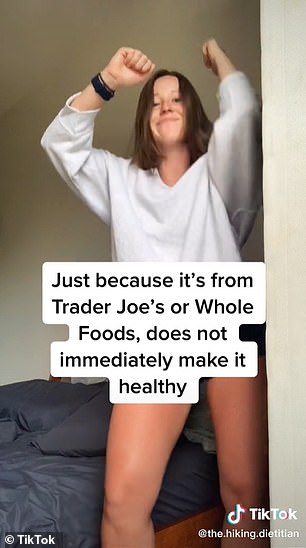 Facts: In her popular videos, she dances around to music as her ‘hard truths’ about food and diets pop up on the screen 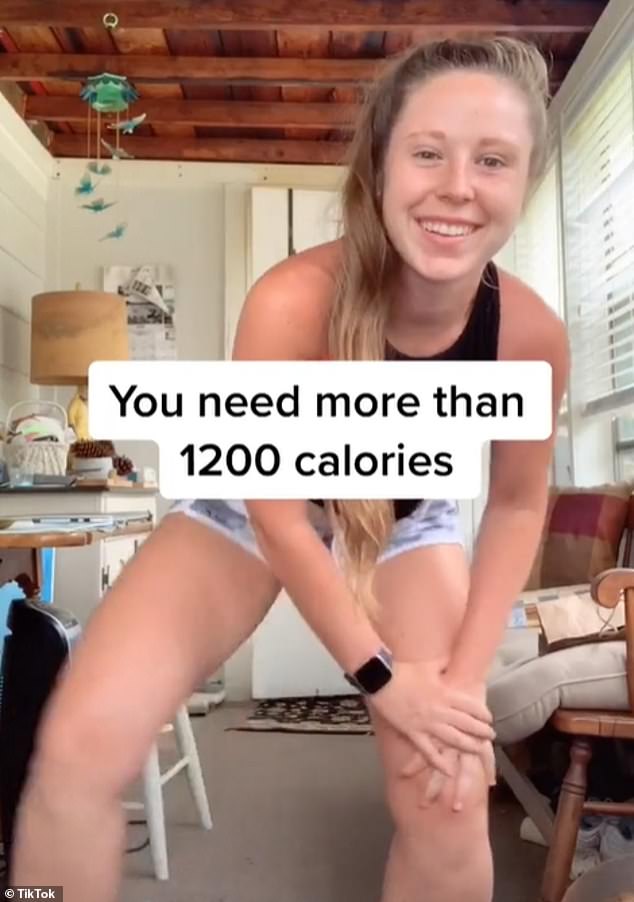 Don’t do it: Forristall is firmly against fad diets, and she insists people need to eat more than 1,200 calories a day

‘There is actually a lot of gray area, which is expected as everybody has their own unique, individualized needs,’ she said. ‘People tend to focus on the extremes instead of finding a healthy balance.’

Forristall, who is a former dancer and hiker, doesn’t believe in unsustainable diets and exercise regimens, nor does she think nutrition should be overly complicated.

In her popular videos, she dances around to music as her ‘hard truths’ pop up on the screen, many of which get pushback from viewers.

She recently caused a stir when she pointed out that sugar isn’t an ‘addictive substance’ like everyone thinks.

‘In some cases sugar does change the neurochemistry of the brain,’ one person hit back in the comments, but Forristall believes in evidence-based nutrition and is always ready to back up her claims. 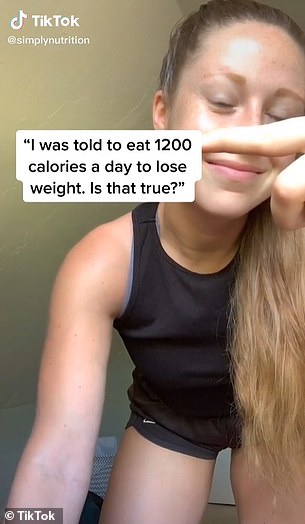 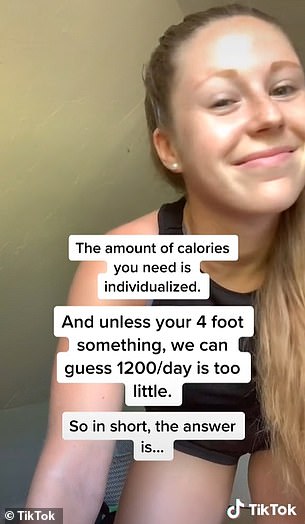 Expert: Forristall, who is a former dancer and hiker, pointed out that unless you are ‘four-foot something’ 1,200 calories per day is too little 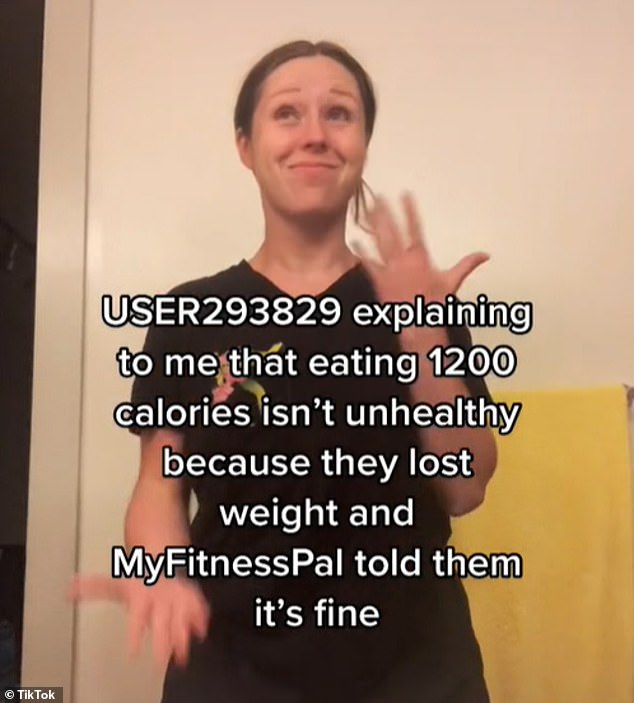 FYI: The dietitian has pointed out that people shouldn’t drastically restrict their calories just because weight loss apps tell them too

‘That happens with multiple things, including eating in general (sugar or other food). It’s part of what tells our body we need food to live!’ she responded.

The dietitian has no problem dispelling common nutrition myths, including the long-held belief that sweet potatoes are superior to white potatoes.

‘The best thing you can do is eat both of them. Both are nutritious. You don’t need to cut out the white.’

Forristall also rubbed viewers the wrong way when she noted that the ‘nutritional difference between white and brown rice is slim,’ which means swapping one for the other won’t make any significant dietary change.

She filmed a follow-up video in which she stressed that ‘science is not an opinion’ after one person commented that it’s ‘funny how every dietitian has their own set of beliefs.’ 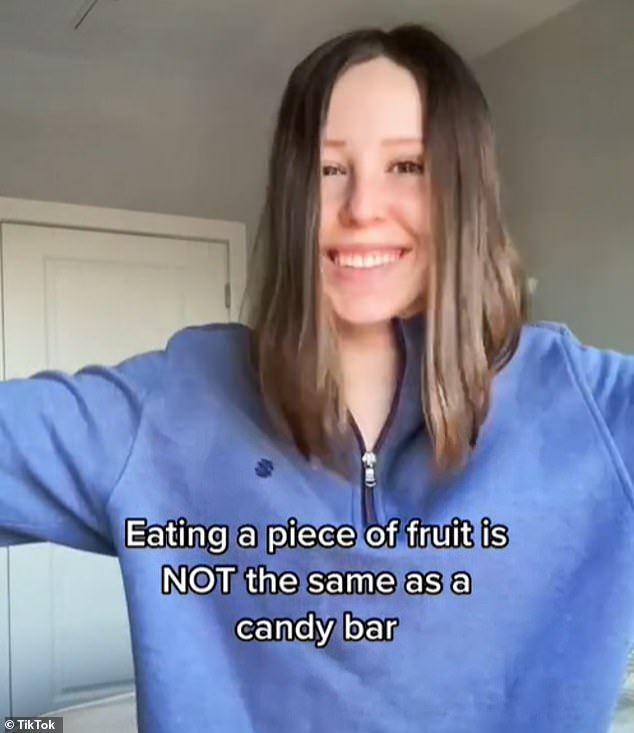 Don’t fear fruit: Forristall has no problem dispelling common misconceptions about sugar and its effect on the body 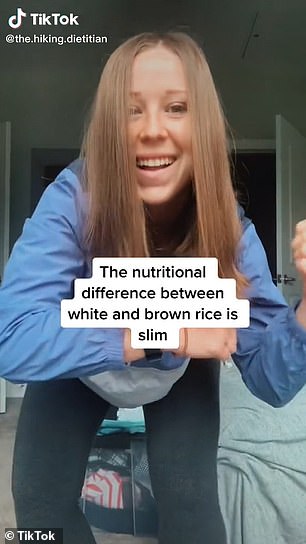 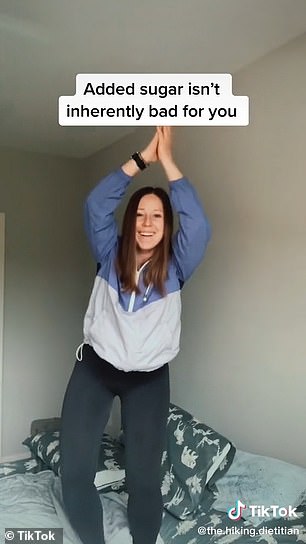 Don’t fear food: Forristall has pointed out that the ‘nutritional difference between white and brown rice is slim,’ and ‘added sugar isn’t inherently bad’ 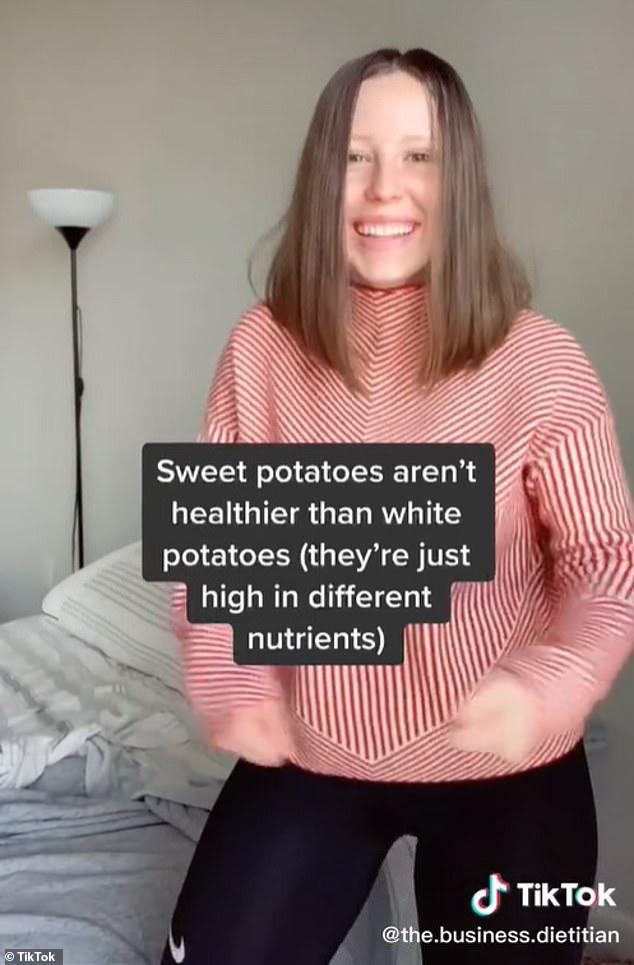 The more you know: In one video, she explained that sweet potatoes aren’t better than white potatoes, saying both are nutritious and should be eaten

‘If you were to ask those dietitians that you’re saying have different opinions than me why they’re saying what they’re saying, I guarantee their reasoning actually aligns with mine. It’s just being said in a different way,’ she insisted, giving the example of the white versus brown rice.

‘There will absolutely be dietitians who do say brown rice is better than white rice and the reasoning will be that the brown rice has more nutrients. And I never said that it didn’t. I said the difference was slim,’ she said.

‘Choosing white rice over brown rice will not significantly impact your health. If nutrients is what you are going for, any dietitian will tell you that there are 1,000 other whole grains that you’d be choosing before rice, white or brown.’

Forristall has also taken aim at Himalayan pink salt and coconut sugar — both of which have become trendy swaps in recent years — saying they are not any healthier than their regular counterparts. 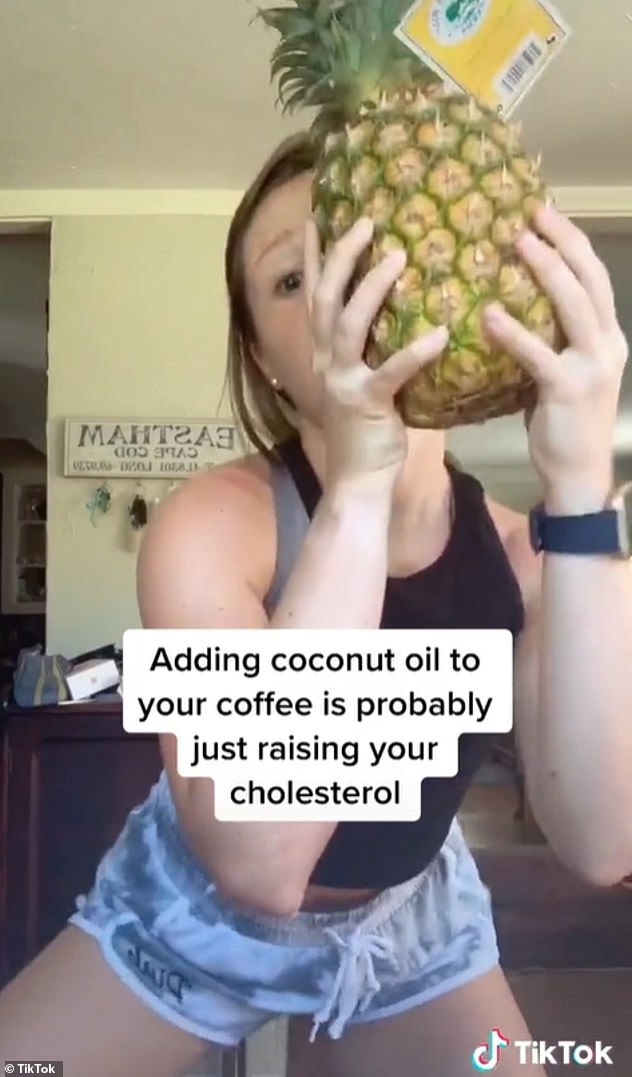 No point: According to Forristall, there aren’t any health benefits to adding coconut oil to coffee 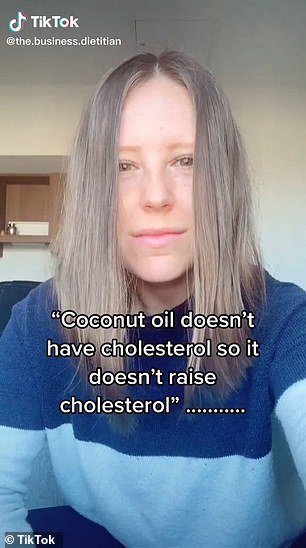 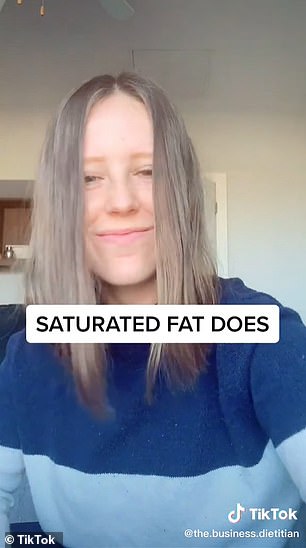 Advice: The TikToker explained in another video that the saturated fat in coconut oil is what raises cholesterol. She said people can still cook with it, but they should use it sparingly 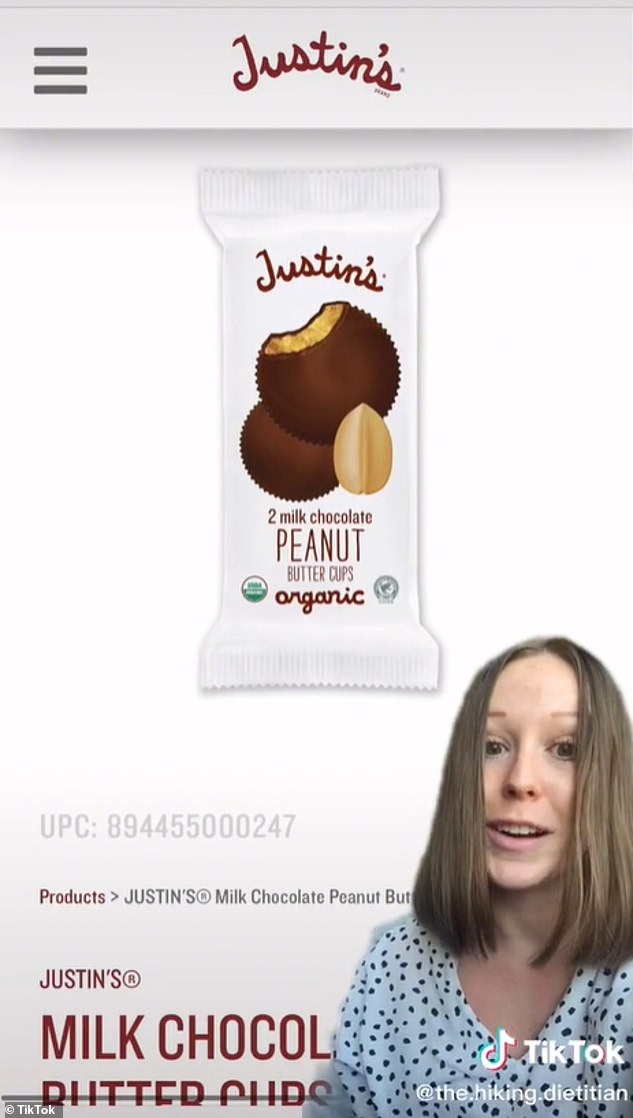 It should come as no surprise that people weren’t thrilled to hear that Justin’s version of the candy isn’t inherently better just because its organic, but she stressed in the comments that ‘added sugar is added sugar.’

‘People on this app are really quick to immediately head to the comments and ready to start a fight without actually listening to what’s being said and asking questions if clarification is needed,’ she noted in another video.

Forristall promotes eating plans and lifestyle choices that people can see themselves keeping up with ten years down the line, meaning she doesn’t advise people to drastically cut carbs or give up gluten and dairy if their body tolerates it.

‘Want to know the secret to weight loss? It’s not the glamorous answer you’re looking for… The secret is consistency,’ she shared in one clip.

She is also firmly against eating 1,200 calories per day to lose weight, which can slow the metabolism over time.

‘The amount of calories you need is individualized,’ she responded to one follower. ‘Unless you’re four-foot something, we can guess 1,200 [calories per day] is too little.’