Yoghurt, bran-based cereals and cucumber are key to getting a flat stomach in 2023, a dietitian has claimed, while you should be steering clear of Asian takeaway food, chewing gum and sodas.

Dietitian Susie Burrell, from Sydney, said it’s perfectly normal to feel a ‘little bloated’ at this time of year after all of the eating and drinking over the Christmas period.

But by including just a few superfoods (and removing a few other foods), you can reduce the bloat and feel ‘bikini ready’ in no time.

Dietitian Susie Burrell (pictured) shared the five foods to add to your diet for a flat stomach in 2023, and the ones to avoid

THE FOODS TO AVOID

While it may surprise some, one of the first foods Susie said you should limit in order to get a flat stomach is cruciferous vegetables including cauliflower, broccoli and cabbage.

‘Cruciferous veggies are extremely nutritious with a number of anti-cancer properties, but they can also produce relatively high volumes of gas thanks to a type of carbohydrate, raffinose, which can remain partly undigested in the intestine contributing to gas production,’ Susie told FEMAIL.

‘For roughly five per cent of the population who are sensitive to the FODMAPs in foods, excessive gas production in the intestine can also cause more extreme symptoms.’

For this reason, Susie recommends that these groups consume these vegetables in ‘small quantities only’.

The second food to limit, Susie said, is soda water and soft drinks.

‘The more gas we consume, the more likely it is we will retain gas in the digestive tract,’ Susie said.

‘The same can be said for any type of bubbly water or diet soft drink as well as the alcohol sugars mannitol, sorbitol and xylitol, which are commonly found in low sugar or low carb snack foods where they may be used as a low calorie sweetener.’

Instead of fizzy drinks, Susie recommends you choose still options as much as possible.

While many people think chewing gum is an innocent habit, in fact Susie said it could be interfering with your quest for a flat stomach.

‘Sugar-free gums may not only contain the alcohol sugars mannitol and sorbitol, which can lead to bloating, but the chewing action will result in you taking in much more air which can become trapped in the digestive system and lead to bloating,’ Susie said. 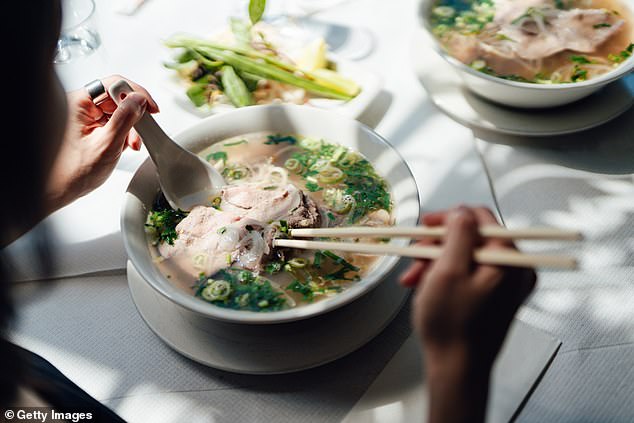 ‘Stir fries, noodles and Asian soups are packed full of sodium with a simple Laksa or Pho containing as much as 2000mg of sodium or our entire upper daily recommends intake in one meal thanks to the addition of soy, fish and oyster sauce,’ Susie said.

She added that the more sodium you consume, the more fluid you retain and hence why you feel bloated afterwards. You’re far better off choosing other forms of takeaway.

Finally, Susie said if you want a flat stomach in 2023, you’re going to need to heavily limit your intake of salty foods.

‘You may have enjoyed plenty of platters and ham toasties over the past few weeks, but it’s now time to go easy on the processed meats including ham, prosciutto and bacon, Susie said.

Not only are they high in fat, but they also carry a hefty amount of salt – which gives fluid retention and bloating.

‘Instead of salty foods, opt for lighter proteins like prawns, shellfish and chicken or turkey breast,’ she said.

THE FOODS TO ADD

On the flip side of the fence, Susie said yoghurt is a fantastic food to add to your diet to stay slim and toned.

‘Not only is natural or Greek low sugar yoghurt extremely nutritious, but yoghurts that contain added “good bacteria” help to naturally regenerate the good bacteria found in the gut which helps to reduce gas, bloating and digestive discomfort,’ Susie said.

Opt for one with a serving of probiotic for peak health and to help keep your gut in optimal health. 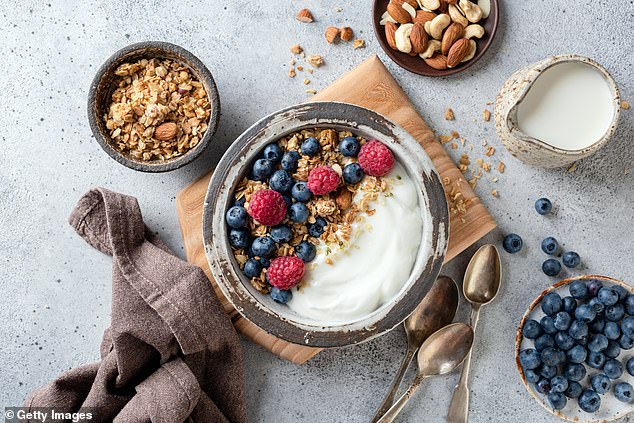 Natural and low sugar Greek yoghurt are excellent foods to add to your diet in order to reduce gas, bloating and digestive discomfort (stock image)

This means that they draw fluid from the body, reduce water retention and ‘keep your tummy relatively flat’

One of the best things you can do for your health is aim for 2-3 cups of herbal tea per day.

If you’re looking for a flat stomach breakfast, look no further than any high fibre, bran-based option – which will ‘help to keep food moving through the digestive tract regularly, removing wastes and keeping the tummy flat’.

‘Bran in particular tends to have the most powerful effect,’ Susie said.

The dietitian recommends you aim for just half a cup of bran-based cereal each day and you digestive system should get more regular.

Your stomach should get flatter as a result

While all salad vegetables are healthy, the high water content found in foods like cucumber, celery and radishes means that they are packed with nutrition and not many calories.

‘Snack on these veggies throughout the day to help eliminate fluids and waste from the body,’ Susie said.

‘You could also aim for at least one serve of salad each day to maximise the flat belly effect of these foods.’

Finally, Susie explained that watermelon and berries are a great option for a flat stomach, as while some fruits have a high sugar content, these are good because they are low in sugar with an ‘extremely high proportion of water’.

Susie Burrell is an accredited dietitian. Susie is continuing to post advice for fans in the wake of her husband Chris Smith being suspended by Sky and 2GB after the television network’s party earlier this month.

For more information about Susie Burrell, you can visit her website here.