Furious diner who obtained kitchen surveillance footage after finding a cigarette butt in his stew watches in horror as he see the chef SPIT in it too!

A restaurant diner in China has told of his horror after watching a chef spitting into his dish while cooking it for him on surveillance footage of a kitchen.

The customer gained access to the video after finding a cigarette butt in a stew he had ordered and then complained about it to the restaurant, according to a report.

He said he saw the chef ‘spitting especially’ into the stew. The restaurant worker claimed he was experiencing tightness in the throat and spat on the ground. 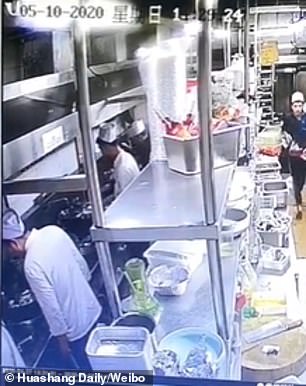 Surveillance footage of the Sufuji Restaurant in Xi’an, China, appears to show a young chef spitting into a dish he was cooking in the kitchen. Mr Zheng, a customer who had ordered the stew, witnessed the revolting scene while viewing the security video in the store on Sunday

The incident took place at around 2pm on Sunday at the Sufuji Restaurant in Xi’an, reported local newspaper Huashang Daily.

The furious diner, Mr Zheng, said he had ordered the stew for his child and sent it back to the kitchen once due to its poor taste.

After he spotted the cigarette butt in the second serving, a waiter told Mr Zheng that it had been left in the dish by accident, he told the newspaper.

And when he requested to watch the security camera footage, he was shocked to discover that the chef had been cooking without a face mask and even spitting into his dish. 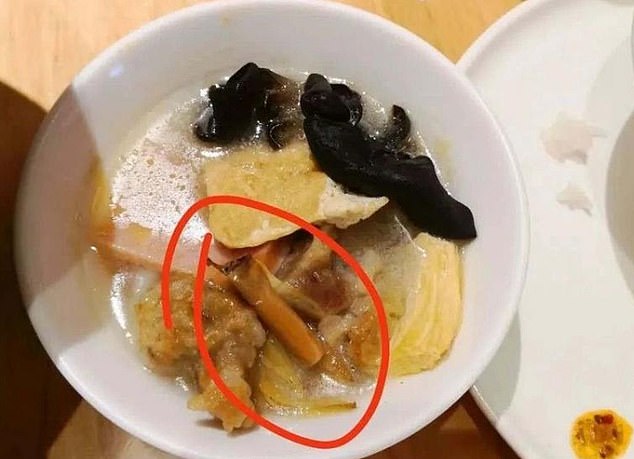 ‘You can see in the surveillance footage very clearly that the chef bent down to spit into the wok especially,’ Mr Zheng said.

The restaurant claimed that the 22-year-old chef, Mr Wang, had spat on the edge of the wok, not inside.

Wang, however, insisted that he had spat on the floor, not towards the wok.

He told the reporter that he had been suffering from throat inflammation. He said he was ‘feeling uncomfortable in the throat’ when he was making the dish. 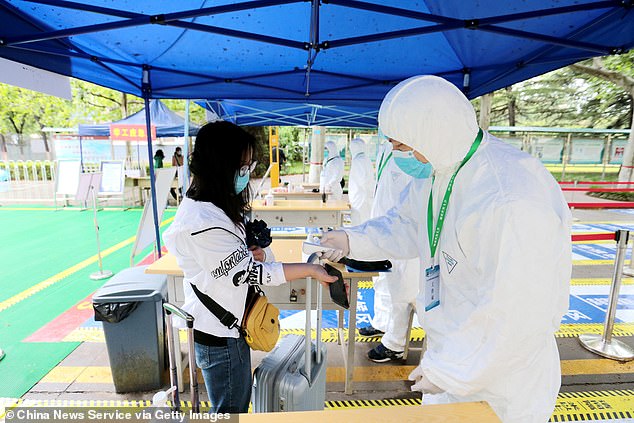 The incident took place at the Sufuji Restaurant in Xi’an. Pictured, a student wearing face mask has her body temperature checked as she arrives in the city on May 9 to resume her studies

The shopping mall, where the restaurant is situated in, said it had ordered the store to shut and ‘dealt with the chef seriously’.

The local market watchdog has launched an investigation into the matter and ordered the restaurant to rectify its problems, reported Beijing News.

The restaurant has promised to cooperate with the investigation.

It said it was ‘very ashamed’ of the matter and expressed its’ most sincere apologies’ to the public in a social media statement today.