The pioneering creative director of Dior who launched the brand’s famed T-shirts proclaiming ‘We should all be feminists’ has opened up on what feminism means to her.

Maria Grazia Chiuri, 53, became the brand’s first female creative director ever last year. As part of her debut collection in September 2016, she designed a simple white T-shirt with the feminist slogan written across the chest in prominent black letters.

Celebrities including Rihanna, Jennifer Lawrence and Natalie Portman have since been spotted wearing the garment — but in her daily life, Chiuri has encountered much less enthusiastic responses to the idea of feminism. 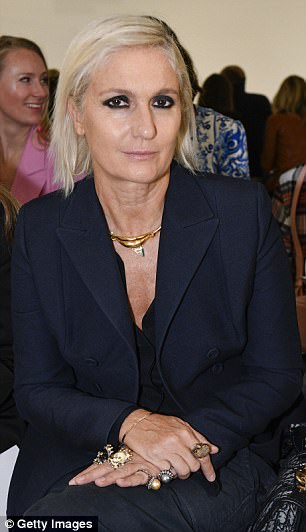 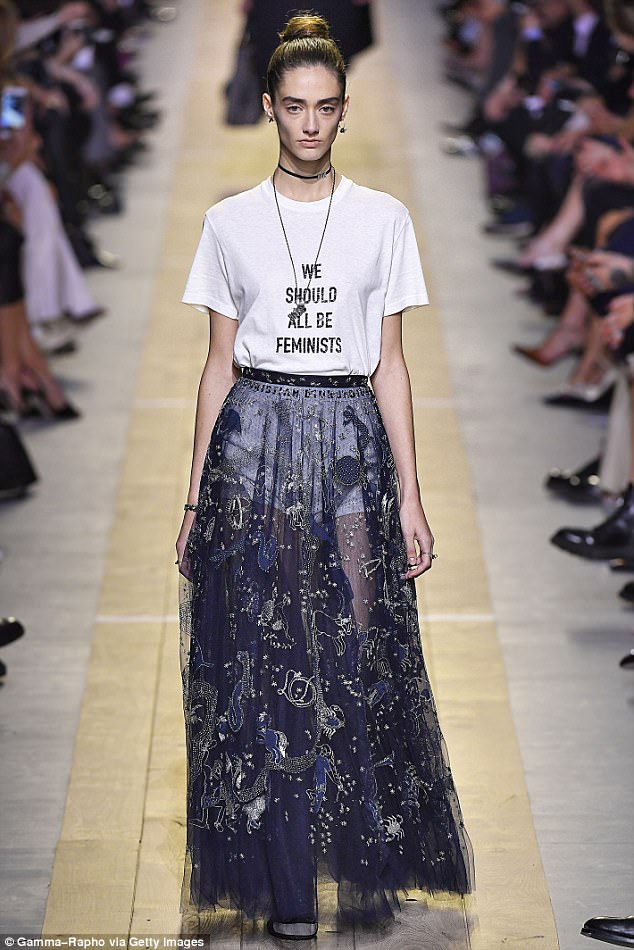 Words: The T-shirts, which read ‘We should all be feminists’, were inspired by an essay and a TED Talk by the Nigerian writer Chimamanda Ngozi Adichie

The Italian designer told Glamour that she was inspired to use the sentence after she and her daughter read all of the Nigerian writer Chimamanda Ngozi Adichie’s books, and watched her TED talk entitled, ‘We should all be feminists’.

Both Dior and Chiuri reached out to the author, who gave Chiuri permission to print the words on her T-shirt and later appeared at the front row or her shows on several occasions.

‘Before, nobody used the word feminist because they thought it was a bad word,’ Chiuri told the magazine. ‘The problem sometimes comes from women themselves. The say, “Oh no, I’m not a feminist.” But do they know what it means? The word means equal opportunity. You can be both feminist and feminine. Why not?’

Reflecting on the identity of Dior as a brand, she said: ‘Everyone told me Dior was a feminine brand. OK. You want to talk about feminine now? What is feminine now?’

The designer also challenged a vision of women once enacted by Christian Dior himself when he said: ‘I drew women as flowers, soft shoulders, full busts, waists as fine as tendrils and wide skirts like flowers in full bloom.’ 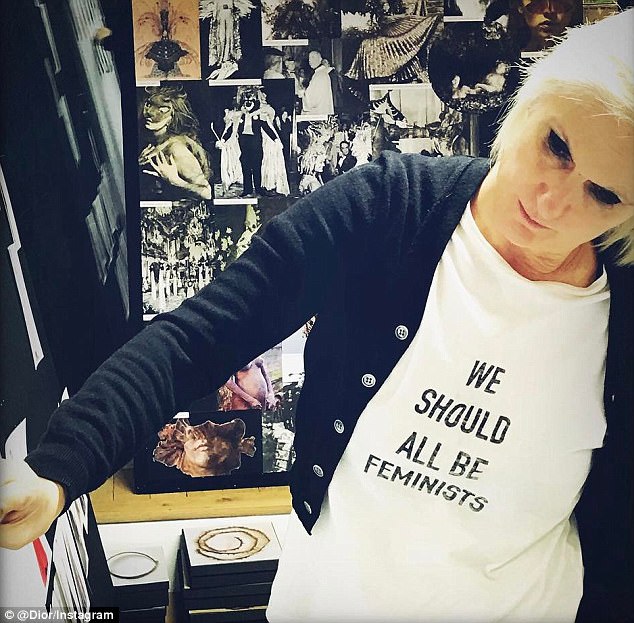 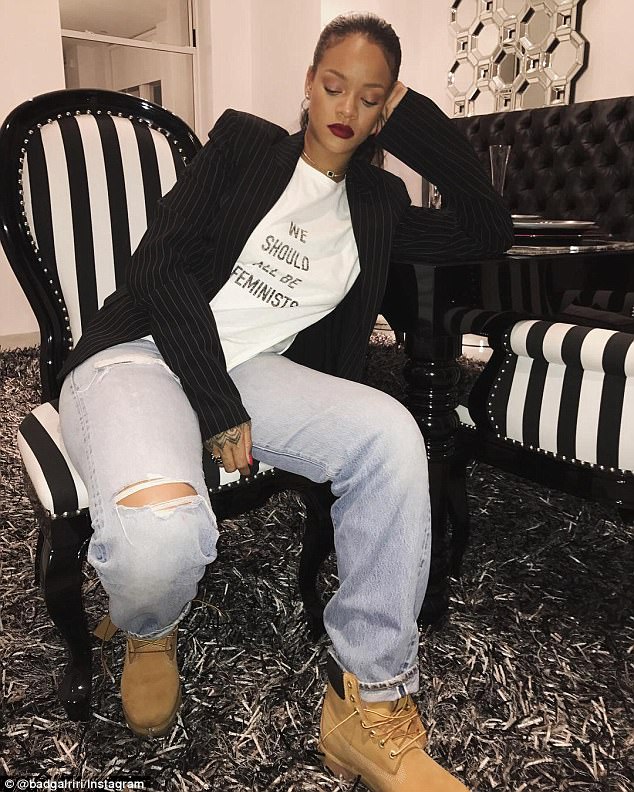 Spreading the word: Rihanna is one of many celebrities who were seen wearing the T-shirt after it made its runway debut in September last year 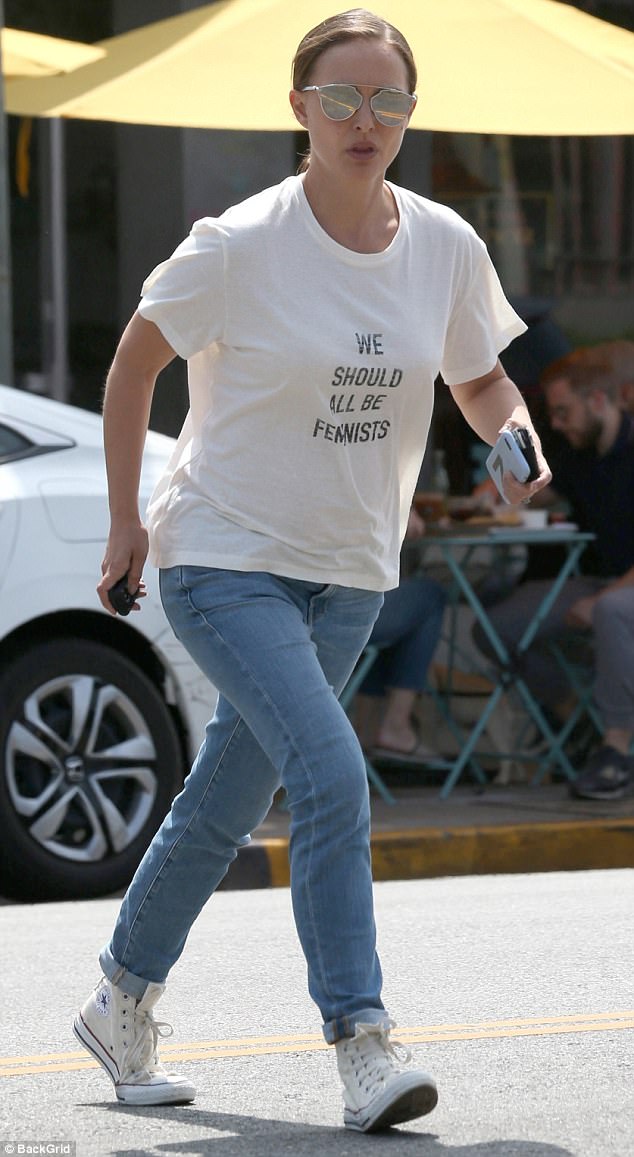 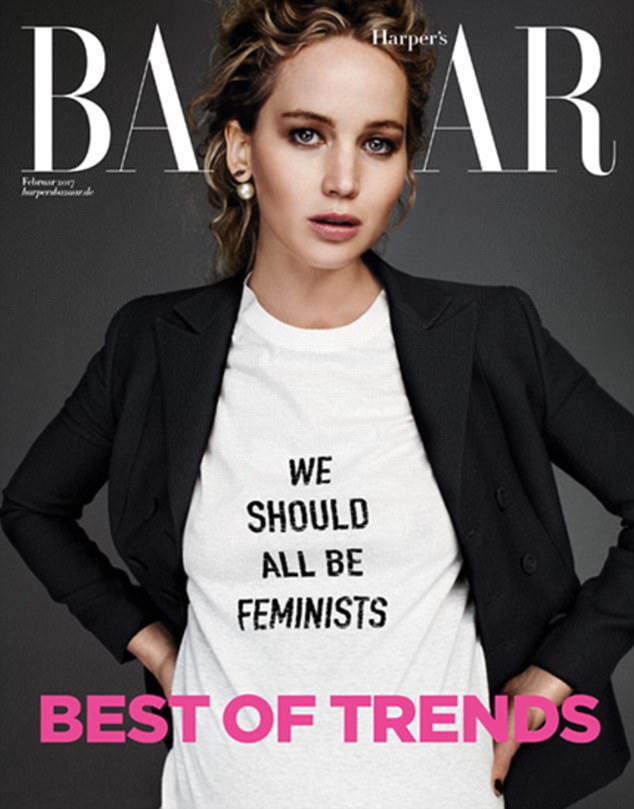 Slogan: Jennifer Lawrence even wore the famous garment on the cover of Harper’s Bazaar 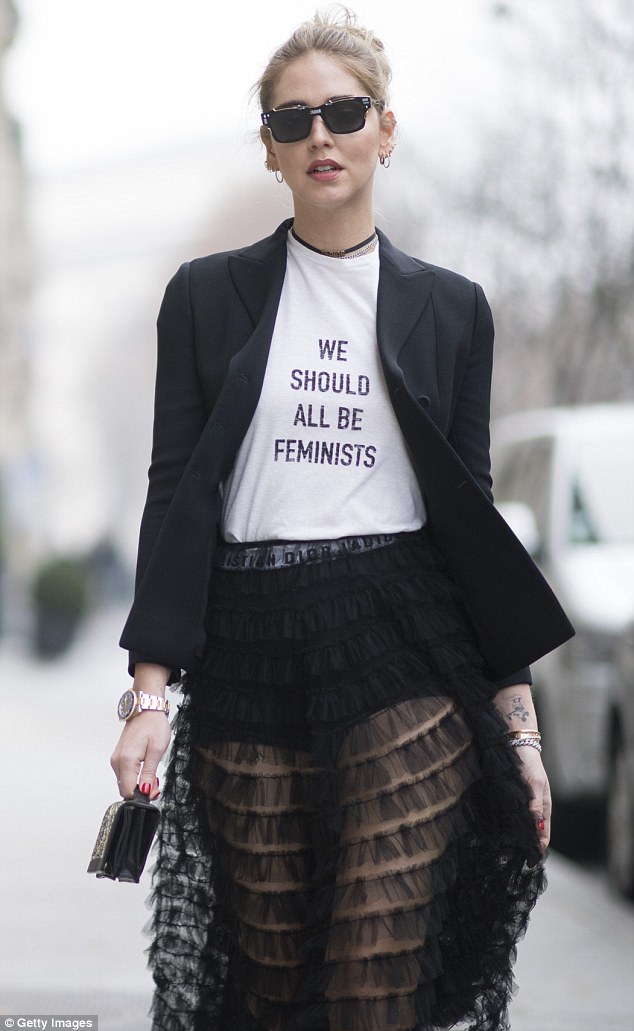 While poetic, this depiction isn’t entirely satisfying for Chiuri, who added: ‘I love flowers. I have flowers everywhere at home. I can make a beautiful dress with flowers. But women are not as simple as flowers. Women are much more.’

Growing up, Chiuri watched her mother working as a seamstress and traveling alone on vacation. She and her relative often discussed women’s rights during Chiuri’s teenage years.

‘We were a very open-minded family,’ the designer said. ‘In some ways, we were a feminist family.’

When Chiuri accepted her position at Dior, she left her native Italy to go live in Paris on her own, without her husband nor her son, who is 24 years old — a move that she now wishes wouldn’t draw attention when it’s done by a woman.

‘Yes, I would like it to be normal,’ she said. ‘It’s so strange that it’s not normal. I want to have the same power as a man, but I want to be feminine. It’s as if it were wrong to want [both]. But why?’

The designer encouraged her daughter Rachele to go study in London when she was 16, so she wouldn’t be exposed to the ‘stereotypical ideas’ that she said are common in Italy when it comes to women.

‘I said, “I don’t want you to stay here. Find your own point of view,” ‘ Chiuri recounted. ‘Sometimes people say feminists are angry. No. I’m not angry. I’m worried. It’s a different attitude.’

Now, the designer hopes her daughter as well as her son view her as ‘brave’.

‘If there is something that I really want to pass down to them, it is this: Be brave,’ she added. ‘Don’t worry. Nothing will happen. Go. That’s what I’d like them to see—a brave woman.’