Diplodocids could move their tails like bullwhips at speeds of up to 73mph, study finds

Diplodocids could move their tails like bullwhips at speeds similar to a fast car, a new study shows.

Researchers created a computerized 3D model of a diplodocid tail based on five fossilised diplodocid specimens.

The diplodocids are a group of herbivorous sauropods, famous for their long necks and long tails, which reached an impressive 40 feet.

According to the findings, the creatures could have whipped their tails at speeds of up to 73 miles per hour (33 metres per second), but nowhere near the speed of sound (760 miles per hour), as proposed by a previous study.

Diplodocid was a long-necked herbivorous sauropod, well known for its massive sizes and long necks and tails

Diplodocids were a group of sauropod dinosaurs and included some of the longest creatures ever to walk Earth.

Some of the large, long-necked creatures, which count Diplodocus and Supersaurus as family members, were up to 112ft (34 metres) long.

While their necks were long, their legs most certainly were not.

Described by some as the ‘dachshund’ of the giant dinosaurs, diplodocids had short legs, with the rear ones longer than the front.

This gave their back a distinctive slope towards the neck.

Their diet is thought to have involved grazing on ferns and horsetails.

The study was led by Simone Conti at NOVA School of Science and Technology in Caparica, Portugal and Politecnico di Milano, Milan.

‘Such an elongated and slender structure would allow achieving tip velocities in the order of 30 m/s, or 100 km/h, far slower than the speed of sound, due to the combined effect of friction of the musculature and articulations, as well as aerodynamic drag,’ Conti and colleagues say in their paper.

‘Material properties of the skin, tendons, and ligaments also support such evidence, proving that in life, the tail would not have withstood the stresses imposed by travelling at the speed of sound.’

This older study, based on more primitive computer simulations, proposed that the diplodocid tail had a structure attached to the end of its tail – similar to a tuft at the end of a bullwhip, usually known as the ‘cracker’.

When the tail was whipped, the cracker could move faster than the speed of sound (340 metres per second or 760 miles per hour) and create a small sonic boom, they said at the time.

However, many palaeontologists were critical of the research, including Dr Kenneth Carpenter from the Denver Museum of Natural History. 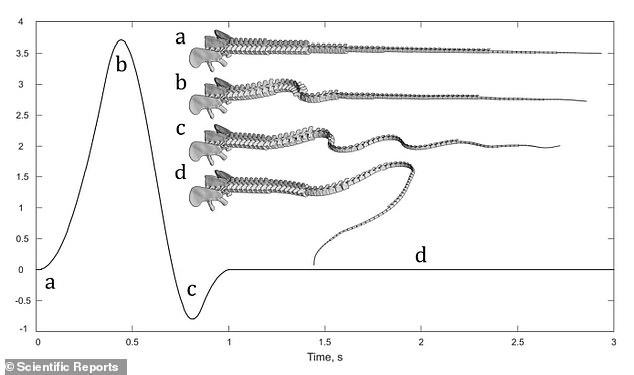 Diplodocids may have been able to move their tails like bullwhips at speeds of up to 33 metres per second (more than 100 kilometres per hour). 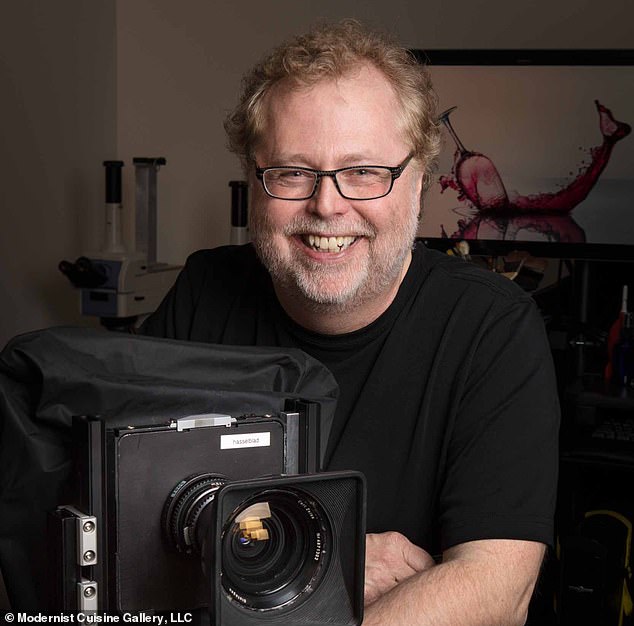 The crack of the bullwhip

Bullwhips taper from the handle to the tip of the whip known as the ‘cracker’ or ‘popper’.

When the whip is swung, energy is transferred from the handle through the whip to the tapering end.

As the mass decreases, the velocity increases which causes the ‘cracker’ to move at speeds faster than sound.

Breaking this barrier is what causes a sonic boom in the whips, but also in supersonic aircraft.

‘To be blunt, the computer simulations are another case of garbage in, garbage out,’ he said at the time, adding that such speeds would have been painful and could have potentially damaged the tail.

The purpose of the Diplodocid’s tail has been debated, although there have been several interpretations from scientists.

Some suggest it may have acted as a counterbalance to the long neck or as a ‘third leg’ when the dinosaur was standing upright on its hind legs.

Alternatively, it could have been a defensive weapon, a noise-making structure or ‘a tactile device for spatial awareness’ – or it could have had a combination of multiple uses.

For the new study, Conti and colleagues simulated diplodocid tail movements using a model based on five fossilised diplodocid specimens.

The model tail is around 40 feet long, weighs 1,446 kilograms and consists of 82 cylinders – representing vertebrae – attached to an unmovable hip bone base.

When the tail base moved in an arc, it generated a whip-like movement with a maximum speed of 33 metres per second (73.8 miles per hour), they found.

This is more than 10 times slower than the speed of sound in standard air and too slow to create a supersonic boom.

For the study, researchers created a computerised model of a Diplodocid tail based on five fossilised diplodocid specimens

The tail model generated a whip-like movement with a maximum speed of 33 metres per second (73.8 miles per hour)

The authors also found that the thin whip-like tail could not move at 340 metres per second (760 miles per hour) without breaking.

They then looked at whether adding three different three-foot-long structures – mimicking the end of a bullwhip – to the end of the model tail could allow it to travel at the speed of sound without rupturing.

The first structure consisted of three segments made of skin and keratin, the second consisted of braided keratin filaments, and the third had a flail-like structure composed of soft tissues.

Again, none of the structures were able to withstand the stress of moving at 340 metres per second without the tail breaking. 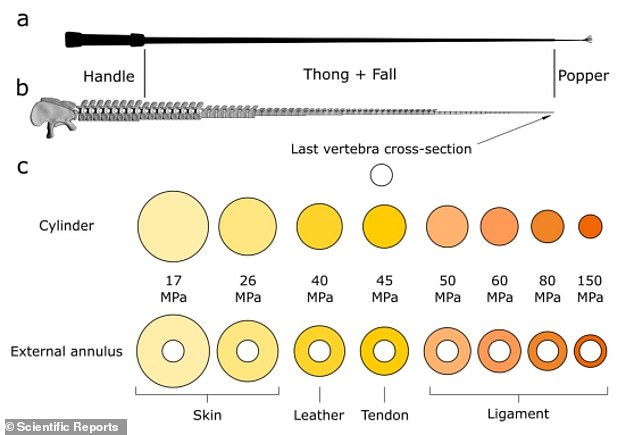 Pictured, the anatomy of a bullwhip compared to the tail model. C) shows cross-section of the animal’s vertebra

While the findings suggest that diplodocid tails couldn’t create a sonic boom as proposed by Currie and Myhrvold, they were still fast enough to be used as defensive weapons or for combat with other diplodocids.

Conti told MailOnline that Currie and Myhrvold’s study in the past ‘did not make any mistakes’ and that his team has built on their work.

‘Thanks to the progress in computer technology and the development of software, like MBDyn, is the key difference between the two studies,’ Conti told MailOnline.

‘In summary, we can say that we were able to achieve the results we obtained thanks to the work previously done by others.’