Nobody puts baby on the floor! Dirty Dancing wedding dance stunt goes horribly wrong as flower girl AND father of the bride crash to the floor while recreating the movie’s famed lift

A bride’s big, choreographed wedding dance stunt nearly ended in tears due to her father’s enthusiasm.

Like many contemporary brides, Samara Fraker decided to entertain guests at her January wedding in San Antonio, Texas, by choreographing a special dance with her father.

Part of the routine involved the famous run-and-lift scene from the movie Dirty Dancing, but, as Fraker told Storyful, because she was too heavy for her dad to hoist up into the air above his head, she decided to have one of her flower girls take on the stunt instead. 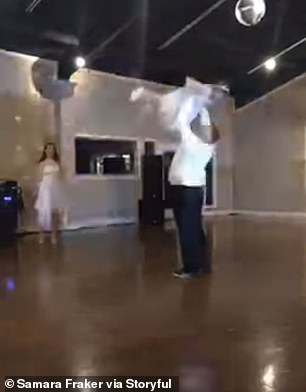 Samara Fraker and her father planned to wow wedding guests with a choreographed daddy-daughter dance. She asked her flower girl to step in for her during a Dirty Dancing-inspired lift

A guest’s video captured the moment when what should have been the highlight of the daddy-daughter dance wound up going horribly wrong.

As Bill Medley and Jennifer Warnes’ (I’ve Had) The Time Of My Life plays in the background, Fraker can be seen standing off to the side so the little flower girl can leap into Fraker’s father’s waiting arms.

Fraker’s father then, full of confidence, lifts the girl straight up into the air in a perfect swan dive position.

Within seconds, the audience’s cheers turn to screams as the flower girl, rather than remaining in the swan dive, continues to fly straight up into the air and over Fraker’s father’s head, before slamming against his back. 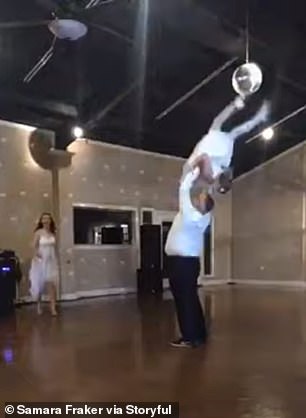 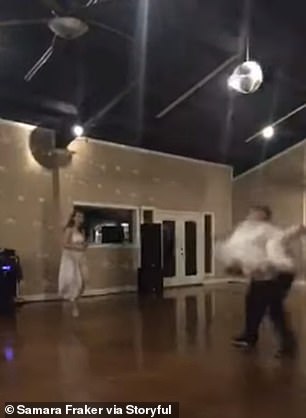 The lift went a little too far as the flower girl flew over Fraker’s father’s head, leading to both dance partners toppling over and hitting the ground 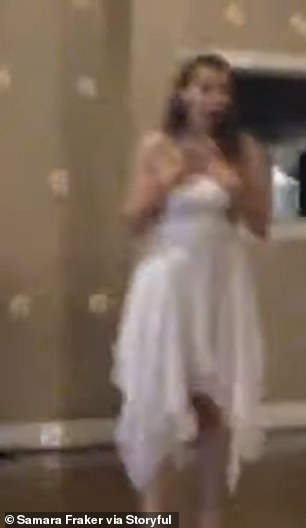 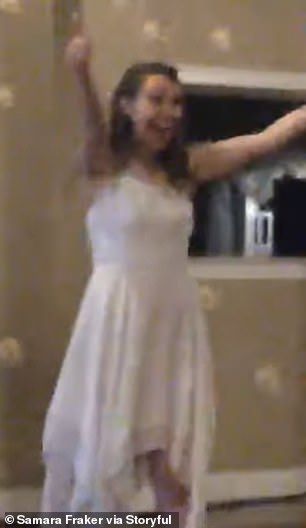 Fraker stood in shock as she watched her father and the flower girl fall to the floor, but then gave a big thumbs up once she realized both parties were okay

Fraker’s father attempts to hold onto the girl, but gravity topples them both to the ground and out of the frame.

As people rush to check on the fallen duo, Fraker can be seen looking on in shock. But, as soon as it’s clear that the two dancers are okay, Fraker gives two thumbs up to the crowd.

‘Everyone thought it was funny once it was confirmed everyone was okay!’ Fraker said of the shocking moment.