Sophie Morgan, 33 (pictured) was stuck on the Tube for an hour and a half yesterday, when her journey should have only taken her 10 minutes

A disabled Channel 4 presenter was left furious after being stuck on a London Underground train for more than an hour because the lifts at her station were broken.

Sophie Morgan, 33, got on the Northern Line at London Bridge to travel to King’s Cross yesterday.

The journey should have taken her 10 minutes. But when she found the lifts were out of order at her destination, she was sent up and down the line three times and it ended up taking her an hour and a half.

At King’s Cross staff told her to go down to Elephant & Castle, where she discovered there was no disabled access. She then got stuck on the train all the way to the end of the line at Morden, before eventually having to go back up to King’s Cross again.

The TV presenter, who was left paralysed from the chest down in a car crash aged 18, took to Twitter to express her anger, where other commuters branded the incident ‘disgraceful’ and ‘pathetic’.

She wrote: ‘Absolute shocker @TFL. I just got the northern line to London Bridge from KX, arrived to find lifts are broken. No warning. Told to go to Elephant & Castle.

‘Got there, no access. Now STUCK on tube with no way off until Morden. Then have to go all the way back to KX. No words.’ 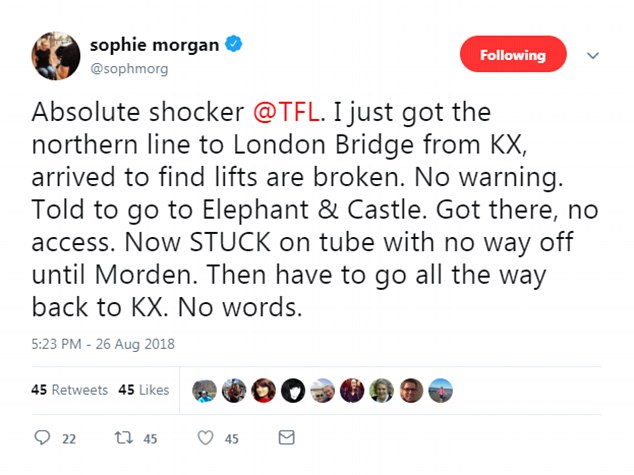 The TV presenter, who was left paralysed from the chest down in a car crash aged 18, took to Twitter to express her anger 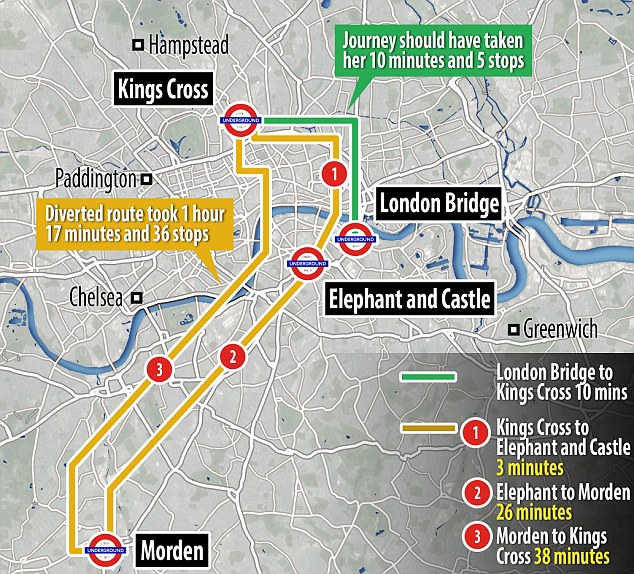 A Transport for London spokesman replied to her tweet, saying: ‘Hi Sophie, thanks for your message and sorry to hear that your journey has been so disrupted today.

‘The lifts at London Bridge were out of service due to broken door fittings. These have just gone back into service so full step free access has resumed. Thanks, Sue.’

But Ms Morgan responded: ‘You MUST update travellers when lifts are broken and you MUST train your staff to know where accessible stations are. I was stuck on the northern line for 90 mins. This could have been avoided.’

Ms Morgan is a reporter on Channel 4’s Unreported World and also presented Live Sports at this year’s Olympics and Winter Paralympics.

She has been voted in the top 100 influential people with a disability for two years running. 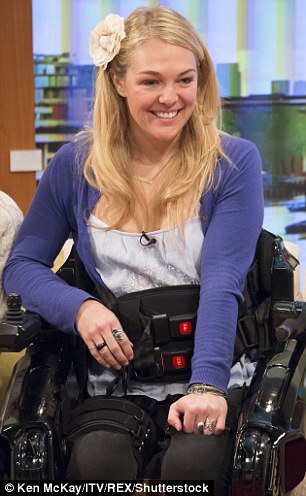 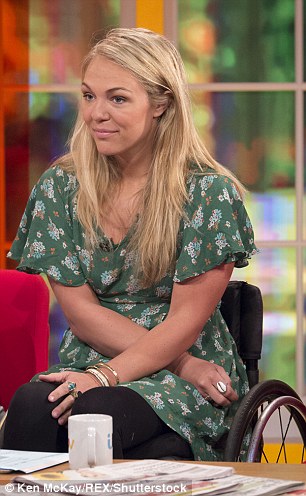 Pictured: Sophie Morgan has been voted in the top 100 influential people with a disability for two years running 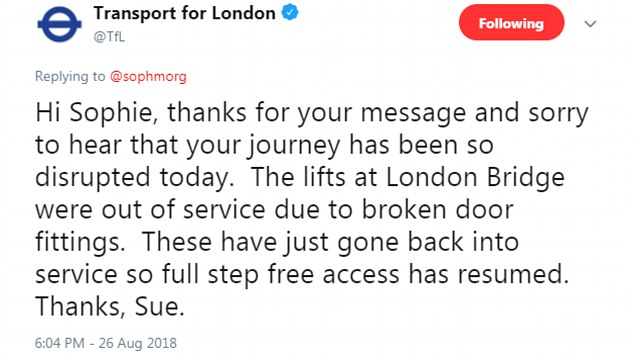 Her recent ordeal comes just a few months after she was left alone for 40 minutes on a plane while she waited for staff at London Gatwick to escort her off.

Other commuters were appalled by Ms Morgan’s experience on the Tube yesterday, responding to her post with messages of support on Twitter.

Fellow presenter Homes Under The Hammer host Lucy Alexander wrote: ‘That makes me furious….Shocking and not good enough @Tfl?

I’m encouraging my daughter independence, imagine her being faced with this as a disabled passenger? Sorry to hear this sophie! Get a cab and send @Tfl the bill?’

Ms Morgan replied to explain she would have got a taxi and footed Transport for London with the bill – had she not been stuck on the train.

Other users commented: ‘Oh soph, how utterly maddening. No acceptable excuse that we aren’t doing better than this. Come on @Tfl.’

One posted: ‘That’s absolutely shocking, ime not disabled and can’t imagine what you have to go through just to go from A to B.’

‘Should be part of an action plan as soon as lift breaks to put out a notice to passengers.’ 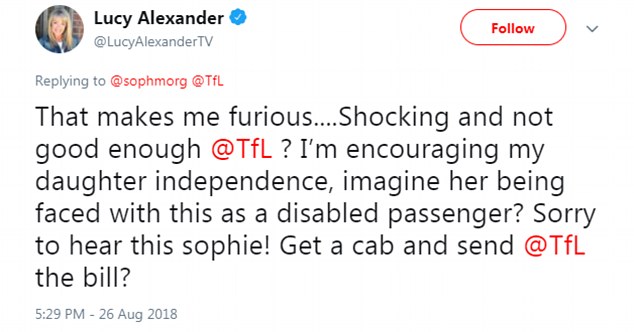 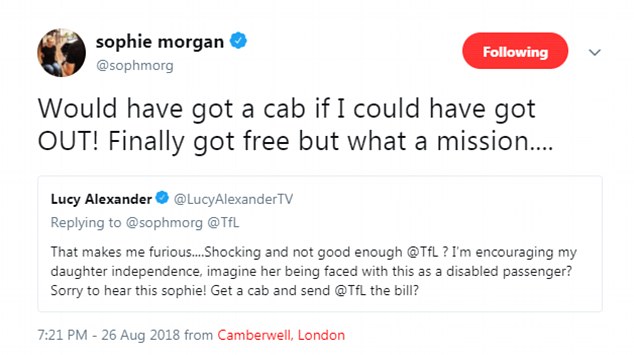 One of her other followers added: ‘It is Pathetic that in the 21st Century disabled people find traveling so challenging on Public Transport.

‘In 2012 the government boasted they saved 500 million on the Olympic Games.

‘They should of put that money into disability access on all the tube stations as a fitting Legacy.’

Her journey should have been five stops on the Northern Line – it ended up being 36.

Mark Wild, Managing Director of London Underground, told MailOnline: ‘We’re very sorry to hear about the unacceptable journey that Sophie Morgan experienced and we will look into it urgently to ensure we learn from it.

‘London has one of the most accessible transport networks in the world but we recognise that we have more work to do, including around customer information when lifts are out of order and we will take Sophie’s comments on board.

‘We are currently investing £200million in making further improvements to step-free access, which will help ensure our services are accessible to more people in future.’