Disabled woman fined £160 for parking between the WRONG white lines

A disabled woman was slapped with a £160 fine for parking between the wrong white lines while visiting a doctor.

Melanie Baslington, who has a cancerous tumour in her bones, placed her car in what she believed to be a marked bay as she attended an appointment at North Point Medical Centre in Hull, East Yorkshire.

The 52-year-old from Bransholme had been forced to park outside the shopping centre next door because the surgery’s spaces were packed.

But when she left the centre, she found a £60 fine waiting for her as it turned out she’d actually parked between the wrong two lines, which marked a space between one designated bay and a yellow grid forbidding parking.

‘I had to park at the shopping centre because there were no spaces in the medical centre and I saw the space with two lines either side it and parked there, I’ve seen other people parked there all the time,’ she said.

‘A couple of minutes later, I’d been fined £60. The warden said there was nothing he could do and I would have to call to dispute it.’

She said that in the fortnight she has spent trying to resolve the dispute, the fine has shot up to £160.

Private company Parkwatch issued the ticket, which states Ms Baslington was fined due to her car being ‘not parked wholly in a bay’. This the spot in which the 52-year-old attempted to park her car while attending an appointment, after which she was shocked to have been issued a fine

But Ms Baslington branded the road markings confusing because two of its white lines appeared to be the end of a bay.

She said motorists are further at risk of being unfairly caught out because there is no sign or yellow line that forbids parking.

‘You can’t tell whether one is a new line or not there isn’t a sign or yellow lines to say you can’t park there,’ she said. ‘One of the lines were fresh but to me it looked like a bay.

‘There’s no writing on the floor, there’s a line and that’s it.’ 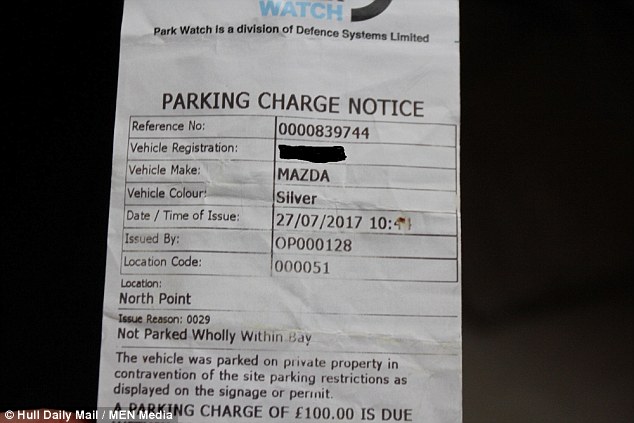 She said she was forced to battle the penalty while on morphine prescribed for blood clots.

‘I’ve been hounded,’ she said. ‘I went into hospital in October as I had three blood clots on my lungs and was getting letters but I was put on morphine so that was the last thing on my mind.

‘I’ve had a solicitor’s letter saying it has gone up to £160 and I have to pay it within three months.

‘I’ve argued saying it doesn’t look like a bay but they’re not interested. I even got another letter yesterday. I did appeal but it got rejected.

‘I’ve been to Magistrates Court who said it had nothing to do with them so I went to the Wilson Centre who told me I would have to do it all online.

‘Lots of people are parking there and still getting tickets, it’s not fair.’ 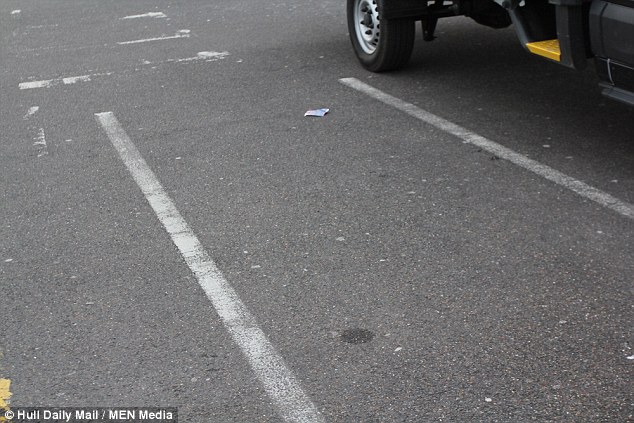 With her appeal rejected, she has been told she must pay the £160 within three months.

Ms Baslington says her ordeal has been made even worse as she continually sees other people being fine for parking in the same spot at the shopping centre.

She has since got a badge which enables her to park her car in spots designate for the disabled, but did not have it when she parked in the space last summer.

Ms Baslington has called for more awareness at the site telling people where they cannot park.

‘I think there should be a sign or the lines lines to show you can’t park there,’ she said. ‘The money I have to find will come out of money which should be used to get me about.’

A Parkwatch spokesman said: ‘The motorists has made several payments to this payment charge so has therefore admitted liability. We have no further comment.’