Married at First Sight UK fans will finally get to see the finale of the show tonight, after Channel 4 failed to air the last show of the series on Thursday.

Viewers were left fuming last night when they realised the previous episode of the hugely popular reality show was playing instead of the finale in a disastrous blunder for the channel.

Furious fans took to social media to complain, and the episode stopped after the first commercial break.

For the next 30 minutes or so, viewers were faced with a puprple screen with the message ‘Programmes will continue shortly’, punctuated with ad breaks, before the channel decided to air a repeat episode of Celebrity First Dates from 2016.

A ‘sonic wave’ which took Channel 4 off the air at the weekend has continued to disrupt programmes throughout the past week.

A spokesperson for E4 said: “Following the incident at the weekend, ongoing technical issues have meant that Thursday night’s episode of Married at First Sight UK was a repeat from Wednesday 29th September.

‘We apologise to the fans of the show and have worked hard to get the episode to you this evening at 9pm. We hope that when you finally watch it you can find out whether Amy & Josh, Tayah & Adam and Morag & Luke renew their vows.’

Channel 4 suffered a disastrous mistake last night after it aired the wrong episode of Married At First Sight UK instead of the finale.

Episode 20 – Vow Renewals 2 will air at 9pm on E4, followed by MAFS After, and both episodes will be available on All4 shortly afterwards.

A reunion special scheduled to air on Monday will still go ahead as planned.

The sixth season, which has been airing on E4 for the last three weeks, saw 16 singletons walking down the aisle to marry a stranger, before they embarked on a luxurious honeymoon, and moved in with each other and their fellow couples.

Wednesday nights episode of the hit TV series finished on a cliffhanger, as couple Amy and Josh decided whether to stay together after the experiment or split for good.

And last night fans were looking forward to seeing whether two further couples – Luke and Morag, Tayah and Adam – had decided to stay together after leaving the experiment.

However after realising the same episode as last night’s was being aired, E4 stopped the show – instead leaving viewers with a screen reading ‘Programmes will continue shortly’.

Viewers were left ‘fuming’ over the mistake, with one writing: ‘Who’s getting fired for replaying last night’s ep instead of the *actual* finale?’

Another wrote: ‘Imagine playing the wrong episode on finale night. So what happens now then? When do we actually see the finale?’ 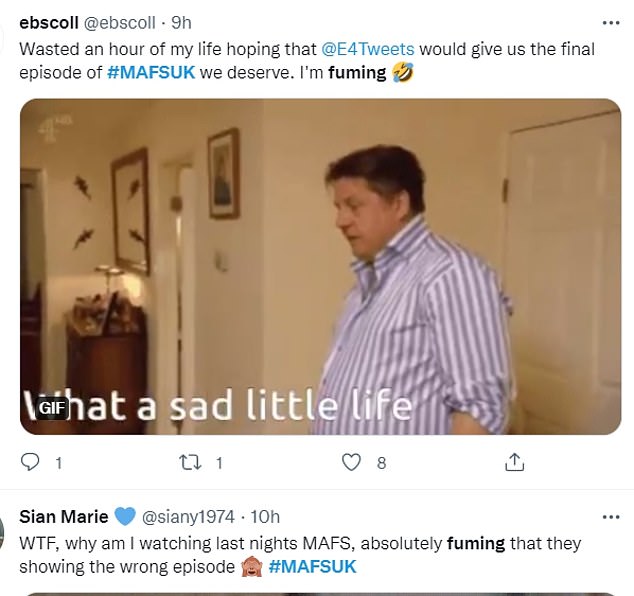 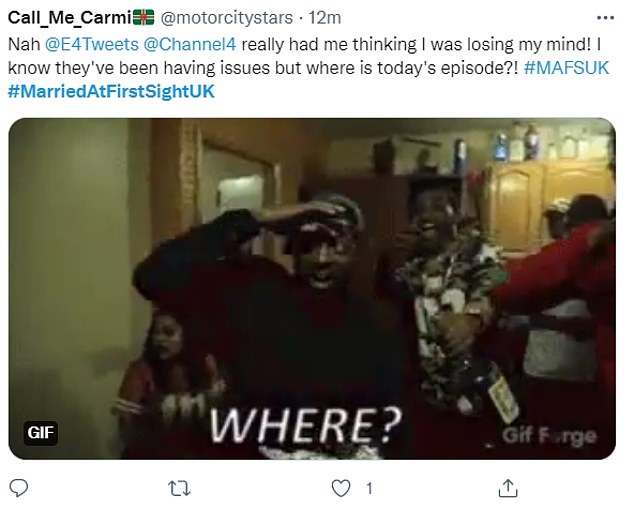 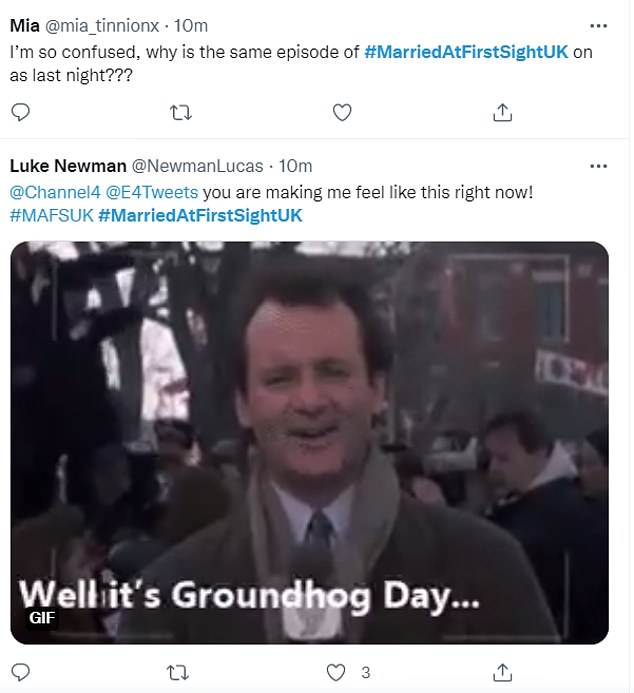 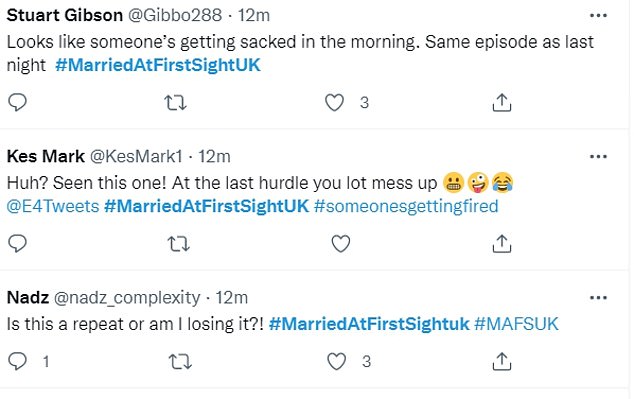 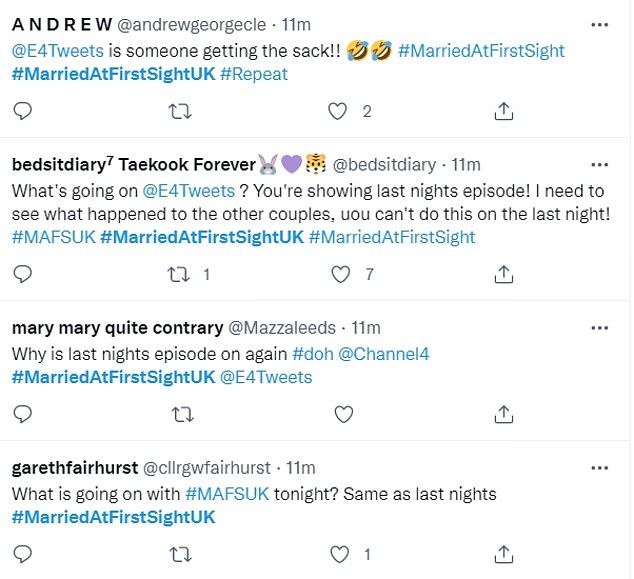 Another commented: ‘E4 is having a bit of a disaster tonight aren’t they?’

Another wrote: ‘WTF, why am I watching last nights MAFS, absolutely fuming that they are showing the wrong episode.’

A fourth said: ‘@Channel4 is having a mare!! Where’s #MAFSUK. Wrong one, frozen screen and now just a load of adverts.

One commented: ‘What a mess E4 are making of this. A repeat of yesterday’s episode, and now just constant adverts… Some poor person is sat working from home, desperately trying to fix this.’

‘It’s all down to our ongoing tech issues which we’re working hard on. We’ll update here as soon as we know more and when you’ll be able to see the final episode of MAFS UK.’

It later tweeted: ‘To confirm, #MAFSUK and Afters won’t be playing tonight.

‘We’re sorry again – we’re working to make it available on All 4 and E4 as soon as possible and we’ll update as soon as we know more.

Channel 4, among others, first went dark on Saturday night following a fire at a Red Bee server centre in White City, west London.

The smoke from the flames triggered a safety measure which sucked all the oxygen out of the room – which in turn caused a so-called sonic wave, causing the servers to shut down, sources told the Times.

Channel 4 does not know when normal service will resume while Red Bee Media, which also broadcasts for the BBC and Channel 5, is racing to solve the issue.

The broadcaster was forced to switch to an emergency backup system Sunday but issues have persisted.

The BBC avoided the worst of the disruption as it was able to switch its operation to Salford. 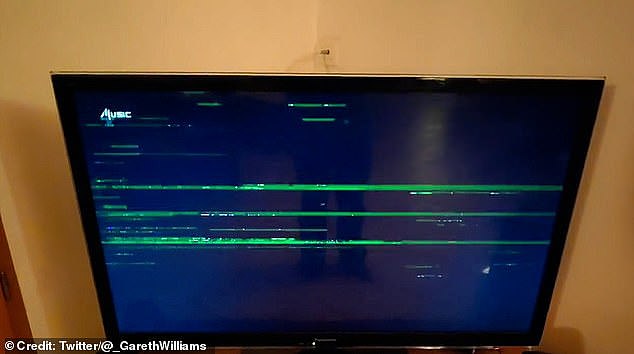 Downdetector reported more than 3,000 outages on Channel 4 from approximately 6.30pm to 8pm Sunday

A spokesperson for Channel4 previously confirmed the channel came off air ‘over technical issues and steps were made to right it as soon as possible’.

They added there is no timeline in place as of yet for a full-fix, but engineers are working to resume normal service.

A spokesperson for Red Bee Media confirmed staff were evacuated after a fire at their Broadcast Centre in West London.

They said: ‘As a result of this incident and the automatic safety measures set in motion at the time, several services originating from the Broadcast Centre have been disrupted.

‘London Fire Brigade attended the scene, and once they had determined that the building is safe, people were allowed to return to the building. We are continuing to work to restore all services and remedy any issues caused by this incident.

‘To avoid speculation, we will not make any further statements until all services have been fully restored and we have concluded a full investigation of the cause. We apologise for any inconvenience for our customers and their viewers.’

Could Married at First Sight UK’s golden couple be on the rocks? Adam admits to ‘enjoying time to himself’ away from wife Tayah and that he has a ‘terrifying confession to make’ at vow renewals

Adam Aveling confessed he was ‘enjoying time to himself’ away from his new wife Tayah Victoria, hours before he was due to take part in a vow renewal on on Married at First Sight.

Estate agent Tayah, 25, tied the knot with electrician Adam, 26, on the E4 show, with the pair connecting emotionally and physically while on a romantic honeymoon together.

During the series, she left her husband’s jaw on the floor when she told another couple in the experiment that they were already talking about having children together.

In a sneak preview of the penultimate episode, Adam and Tayah were split for the first time ahead of the final ceremony, with the groom admitting he had a ‘terrifying’ confession to share with his wife. 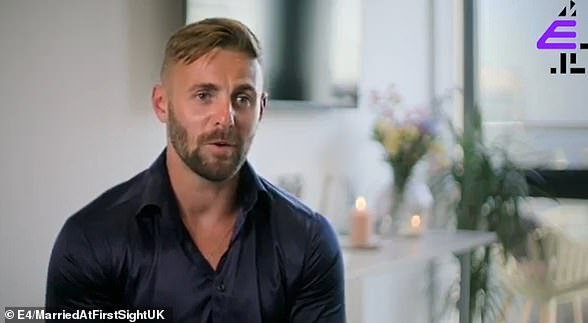 Adam Aveling, 26, confessed he was ‘enjoying time to himself’ away from his new wife Tayah Victoria, 25, on Married at First Sight, hours before he was due to take part in a vow renewal with her

He explained: ‘Being apart from Tayah is strange, having spent so much time with her over the past months.

‘I think Tayah is probably missing me, probably a little more than I’m missing her.

‘I am enjoying time to myself. I’ve been single for so long, I’ve lived on my own for so long, you do start to enjoy your own company and just enjoy doing things you want to do.’

Meanwhile he confessed he understood the concerns of others who had felt they were moving too quickly. 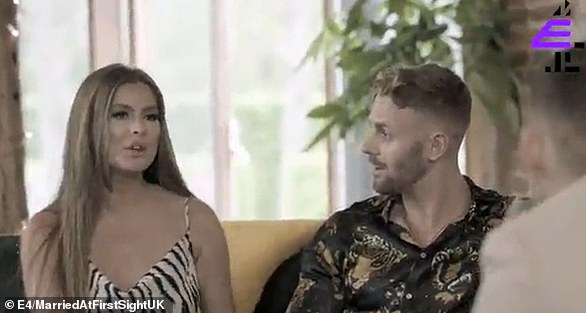 Adam and Tayah were split for the first time ahead of the final ceremony, with the groom admitting he had a ‘terrifying’ confession to share with his wife

He said: ‘Throughout the experiment a lot of people have been telling us to slow down. I get where they are coming from.

‘It’s very weird to go from years and years of not really giving two thoughts of a relationship to jump straight in the deep end.

‘It’s crazy that I’m doing this after such a short period of time really.’

‘I’ve obviously got a lot to think about with the vow renewals coming up. There’s something I want to say to Tayah but I’m absolutely terrified about it. 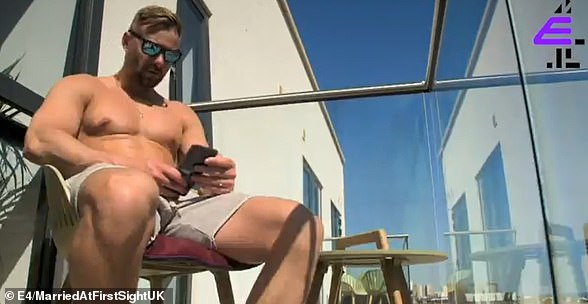 ‘I just don’t know when the right time is.’

After being paired by the expert matchmakers on the show, Adam faced an awkward moment at his wedding ceremony.

He was blown away by one of Tayah’s bridesmaids, beaming as he saw her and saying: ‘Wow, hi nice to meet you.’

The moment saw one of his wedding guests being forced to remind him the bridesmaid was not his wife-to-be. 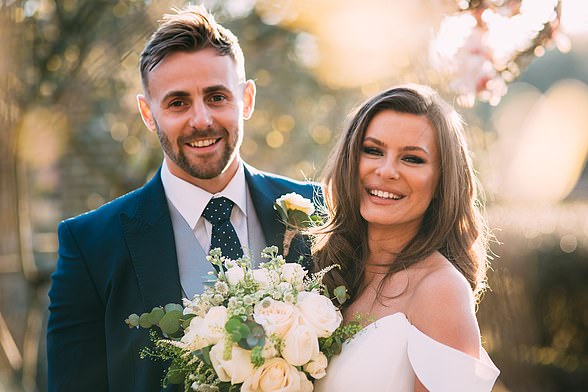 Tayah and Adam had appeared to be one of the strongest couples on the experiment, with the pair connecting emotionally and physically at their wedding and while on a romantic honeymoon together

Despite the mishap, the bride and groom were immediately keen on each other with Adam calling her ‘absolutely stunning’.

Later, at the wedding breakfast, Tayah was getting along swimmingly with Adam’s parents, who teased him about confusing his bride with the bridesmaid.

Meanwhile Adam was left shocked when Tayah announced to the group they were hoping to be pregnant as soon as possible.

He said: ‘We’ve not properly agreed that’s going to happen by the way, she’s just having visions.’