By Vincent Graff For The Daily Mail

When I first came to the Algarve, it was the Seventies and I was a little boy. Portugal had not long emerged from 50 years of dictatorship and we spent three or four holidays here because Dad was doing business in the area.

I remember fishermen selling sardines from their boats, widows on their doorsteps top-to-toe in black — and open sewers running down to the sea. The Algarve wasn’t really set up for tourism.

Now, 40 years on, two million or so Britons visit Portugal each year — with a significant number heading to the Algarve — which is why the authorities are quaking a little at the thought of Brexit.

Sunny days: The cove next to the Tivoli hotel in Carvoeiro. Two million or so Britons visit Portugal each year — with a significant number heading to the Algarve

Their response? Promising fast-tracked UK passport lanes at the airport and free healthcare. (They call the policy ‘Brelcome’.)

A lot has changed since my childhood. This time round, it is far more glamorous and no one is worrying about the plumbing. Indeed, my 13-year-old son and nine-year-old daughter spend happy hours in the hotel spa.

We’ve split our week in two: the first half in Carvoeiro, a quiet town, the second in livelier Vilamoura.

At Carvoeiro, we stay in a hotel like no other. From the street the Tivoli looks nothing special.

But inside there’s a floor-to-ceiling window opposite the reception area, which looks out on a spectacular turquoise cove framed by honey-coloured rock.

And it’s so lush. When we open our curtains in the morning, my wife spots yellow and green cycads, spiky agave, giant daisies and fig trees. The children want to get out and about, so we head for Zoomarine, where we’ve booked the Dolphin Emotions experience — an hour swimming up-close with dolphins. 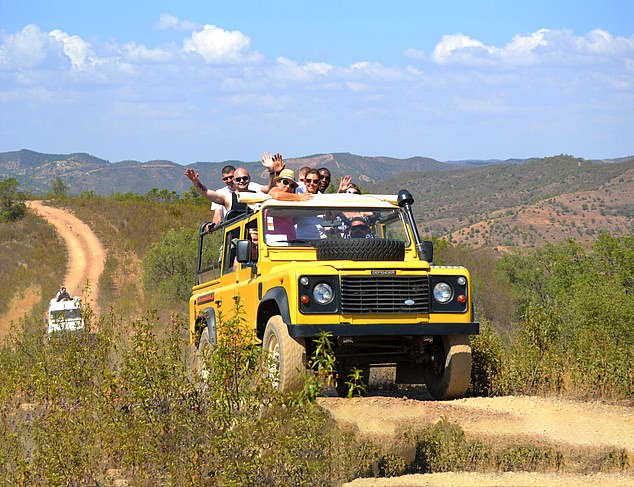 An Algarve Jeep safari. The jeeps head into the Barrocal hills, where the buildings give way to carob, cork, olive and almond trees

Our instructor, Victor, waves his arm, twists his finger and blows a whistle; the dolphins jump, twist, clap, then rush back to our side. They’re mesmerising.

At Vilamoura, we stay in another striking Tivoli hotel: there’s water on both sides — one side beach, one side posh marina — and a groovy beach club attached. The manager tells me the windows are free from birds’ mess because ‘we employ two falcons who work shifts to scare off the seagulls’.

Vilamoura is a purpose-built tourist town created in the late-Sixties on some unloved farmland. But we’re more interested in the landscape than the bars.

We take a boat trip from Albufeira and see dozens of dolphins in the wild, swimming just feet from the boat.

Back on land, we go for a Jeep safari into the Barrocal hills. Buildings give way to carob, cork, olive and almond trees. One moment you can smell orange blossom, then lavender, then carob. I wish my late father could see it.