Wherever your travels lead in southeast Sicily, you’re never far from 1693. The earthquake of January that year destroyed more than 70 cities, killing some 60,000 people —including two-thirds of the population of Catania.

Which makes the Baroque cities, built with such nerve and verve following the quake, so awe-inspiring — both from an architectural and emotional perspective.

But, then, Sicily has always ploughed its own furrow — sometimes to its detriment.

Chiesa nostra: The Chiesa Santa Maria dell’Ittrio and Ragusa Ibla – or St Mary of the steps church (above) – in Sicily, Italy, is gripping on, like many monuments do, since the 1693 earthquake destroyed 70 cities and killed more than 60,000 people

At the start of the 1995 trial of seven-time prime minister Giulio Andreotti on charges of colluding with the Mafia, ordering the murder of a journalist and misusing public funds, his defence lawyer stated that Sicily was ‘too complicated even for Sicilians to understand’ and suggested the judge throw out the case.

Others, such as Peter Robb, whose book Midnight In Sicily offers a compelling introduction to the highs and lows of the Mediterranean’s largest island, have said you can’t hope to understand Italy without trying to understand Sicily.

He has a point. Traffic lights seem to be for guidance only; men wear ever tighter ‘budgie smuggler’ swimming briefs; the tomatoes are the best in the world; good vino is a fraction of the price elsewhere, and in summer, the midday heat is such that some places are reduced to a post-apocalyptic stupor.

Certainly that’s the case in our fabulous villa, Il Baglio della Sorgente, part of the expanding Thinking Traveller collection, where six of us seek out the gentlest of post-prandial breezes amid acres of orange, mandarin and lemon groves.

The house took six years to build and is a triumph of good taste and bold imagination, reached via a long dusty drive about ten minutes from the fishing village of Scoglitti. It features nine exquisite bedrooms, all with their own bathrooms, in two separate houses that share a walled garden and open courtyard.

Both are filled with antiques from around the world, including a huge Chinese bed converted to become a table, doors from Brazil and wrought-iron chairs. Keeping everything neat and tidy is Ramona, whom my wife says looks like Penelope Cruz. I’m glad she, not me, made that connection.

Thirty-something Ramona spent ten years working in Manchester, where she managed a restaurant frequented by footballers and their wives. That was ‘back in the day’, she says with a charming Italian/Mancunian inflection.

Now she’s here with her boyfriend and dog, helping guests discover a small corner of Sicily where tourists are made to feel welcome but where nothing is specifically tailored to them.

In fact, we don’t come across any other Britons the entire week.

The beaches are scruffy. If you want a Caribbean-style turquoise experience, then you need to drive east for an hour or so in the direction of the Vendicari Nature Reserve. Which you must do, not least because you can combine it with visiting thrilling Baroque towns and cities, some of which cling to the sides of steep canyons in clear defiance of what happened in 1693. 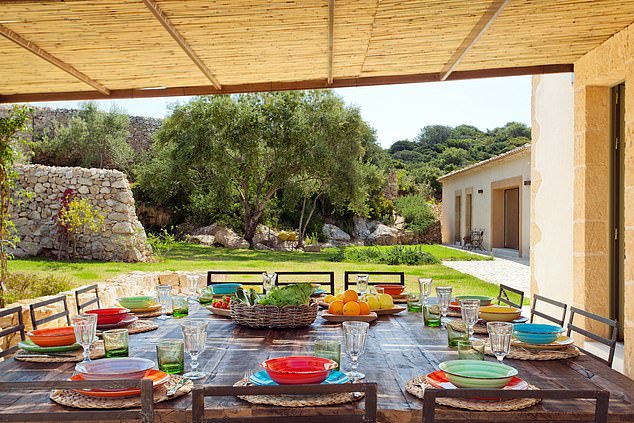 Cruz passengers: Il Baglio della Sorgente villa, which costs from £5,330 a week based on ten people sharing, offers a Penelope Cruz lookalike, no other Brits and is packed with antiques from around the world, but it is close to ‘scruffy’ beaches

We hire a guide in Ragusa, part of the Val di Noto UNESCO Heritage site. He seems to enjoy the look on our faces as we pause outside the St Mary of the Steps church and catch our first glimpse of Ragusa Ibla tumbling down a gorge, with the domed cathedral of St George peaking out from the top.

Modica is nearby and, to our minds, even more delicious — but that might have something to do with our visit to Antica Dolceria Bonajuto, the oldest chocolatier in Italy (‘eat chocolate, lose weight’ urges a sign in the wood-panelled shop that looks like a Fifties English chemist).

Better still is Noto where, after the quake, three architects hired by a Spanish duke were allowed to go wild — and came up with a Baroque masterpiece, displaying all the flair and fervour of the period, with ever more elaborate facades trying to outdo each other.

For four of our group this is a first experience of Sicily, a taster of sorts in perhaps one of the most unfashionable parts of the island — but enhanced by one of the loveliest villas you will find anywhere in the Med.

The Sicilian Mafia may ruin lives — and, of course, Andreotti was acquitted — but this rough and tough, architecturally magnificent, historic island has a charm that is both unfathomable and unforgettable.