In the shadow of Castro Marim castle is a simple, whitewashed barn. Surrounded by what might appear to be sun-baked flatland, it is so ordinary that you might be forgiven for missing it on the road towards the more obvious splendours of the Algarvian coast.

Yet these fields yield something that has been cultivated here for centuries but now feature in the kitchens of Michelin-starred restaurants around the world – Fleur de Sel. Or in other words, salt.

We stop here on our road trip through Eastern Algarve and although it may seem strange to spend a day navigating hot, water-logged salt pans, this is not the same stuff you sprinkle on fish and chips. Fleur de Sel is farmed slowly, by hand, until it forms into crystals that on closer inspection resemble the pyramids of the Aztecs.

Jorge Raiado took over his father-in-law’s land, 13 years ago, and examining the tiny wonders of nature that he plucks from the ground below us, it’s easy to see why this is some of the most sought-after salt in the world.

‘The Romans saw the potential the Algarve has to produce salt for drying fish and meat to feed their army,’ he explains. ‘But in the sixties and seventies, chefs began looking for something less industrial, something with more flavour and quality.’

The Salmarim farm of just seven hectares produces 100 tons of salt a year, but only ten per cent is deemed worthy to be called fleur de sel.

The proof is in the tasting, and we sample it on fresh vegetables and prawns cooked on his Calor Gas stove. He sprinkles table salt, sea salt, and Fleur de Sel on slices of the same tomato to demonstrate the impact it has. As a sceptic, I was surprised at how different it would really be, but the tomato sings with Fleur de Sel. 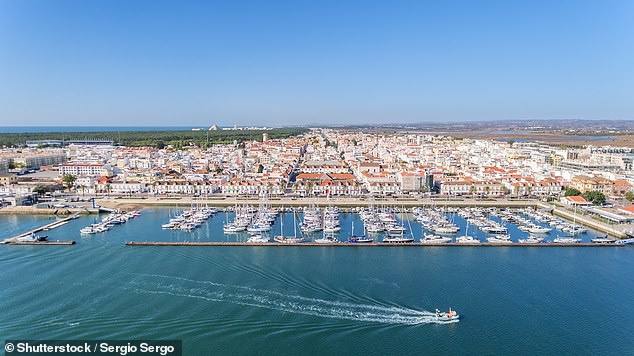 In the town of Vila Real de Santo Antonio, pictured, Jaymi dines on a feast of Portuguese cuisine, from cod, to pork, to squid

Quality comes at a cost – £103 a kilo, but Jorge compares his salt with wine. ‘Why do people buy a €300 bottle and not a cheaper one? Because they are not the same.’

Salt is not the only foodstuff the Eastern Algarve is famous for. Much of the area’s historical wealth has come from commercial fishing, and while the industry declined by the mid-20th century, a rich food heritage remains.

South of Castro Marim, on the banks of the Guadiana River that marks the border between Portugal and Spain, is the town of Vila Real de Santo Antonio. We stay at the five-star Grand House, known locally for its fabulous restaurant. 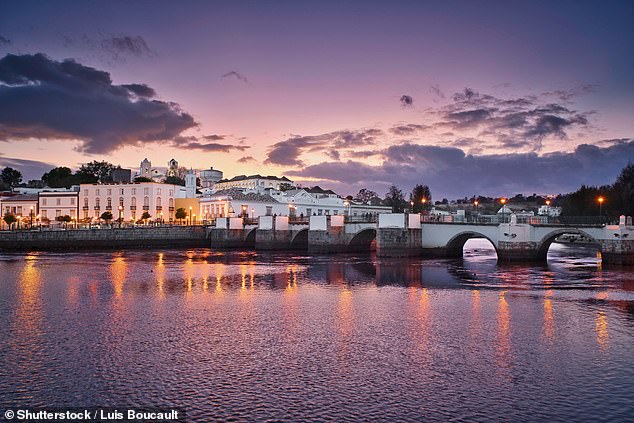 Jaymi reveals that Tavira, pictured, is ‘widely considered the prettiest town in the Algarve’

In a setting which reflects the building’s Belle Epoque history, a tasting menu takes us on a journey of Portuguese cuisine, from cod, to pork, to squid, all paired with regional wines.

Drive west along the coast the next morning, through quiet towns and rural communities and you’ll be struck by how authentic the eastern Algarve feels. Its hills are peppered with carob trees, and olive groves.

Tavira, widely considered the prettiest town in the Algarve, is a short ferry from the quiet beaches of uninhabited island Ilha de Tavira. 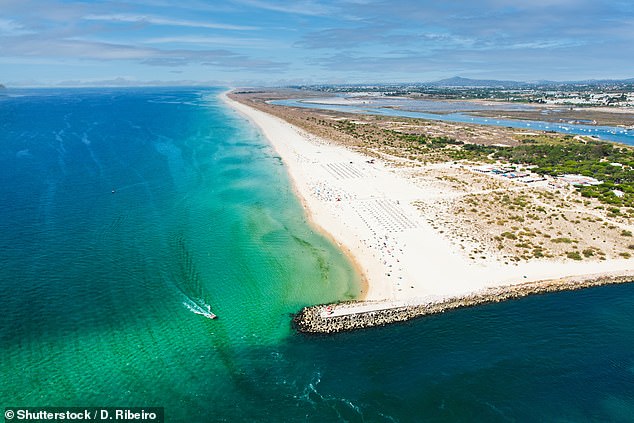 The historical centre thrives with bistros and bars. Hotel Vila Gale Tavira is inspired by the region’s Arabic history, the Moors ruled much of Portugal for five centuries, and it features a Turkish bath and spa that is worth stopping for.

No two Algarvian towns feel the same, and heading even further west, we next visit Olhão. Still an active centre for commercial fishing, it is now also home to artisans attracted to its industrial past, bustling food markets and striking street art.

For years the town’s whitewashed centre was left to crumble, and much of it still has a gritty charm, but increased investment makes this an attractive, authentic destination.

One of the most impressive properties is the refurbished Casa Fuzetta, a labyrinthine, 12-bedroom, 19th-century former doctor’s residence in the old town. Its rooftop boasts views towards the islands of the national park, the Ria Formosa, which spans 65 square miles.

We explore the park by catamaran from nearby Faro, and sail through the maze of sandbanks and islands. Although you are minutes from the busy port of Olhão, it feels peaceful and wild.

Guides Maria and Bruno explain how isolated communities still live on the islands and use ancestral fishing techniques to remain independent.

It is hardly surprising that these warm, unpolluted waters produce some of the best shellfish in Europe.