What does the most luxurious hotel in the world need to burnish its glittering reputation?

In the case of the Burj Al Arab in Dubai, the answer is two more stars (it already has seven) in the shape of the top-rated Michelin chefs Francky Semblat and Kim Joinie-Maurin.

The Dubai landmark, with its instantly recognisable sail-shaped structure, is already synonymous with over-the-top luxury. This hotel doesn’t have rooms, only suites so spacious they have two floors connected with striking curved stone staircases. TV’s rise at the touch of a button and curtains close at the touch of another.

The Burj Al Arab in Dubai, pictured, is instantly recognisable thanks to its sail-shaped structure and is synonymous with over-the-top-luxury 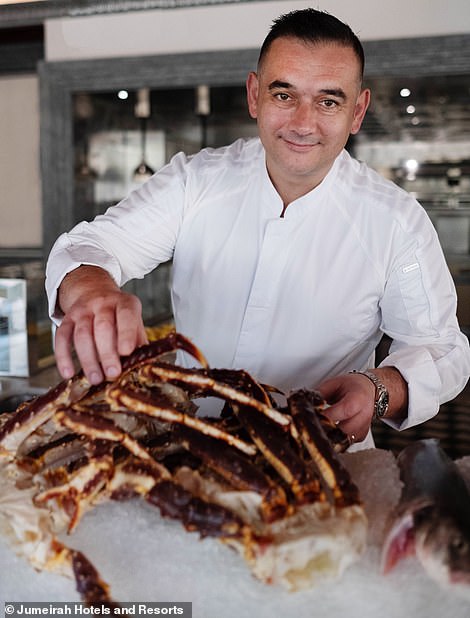 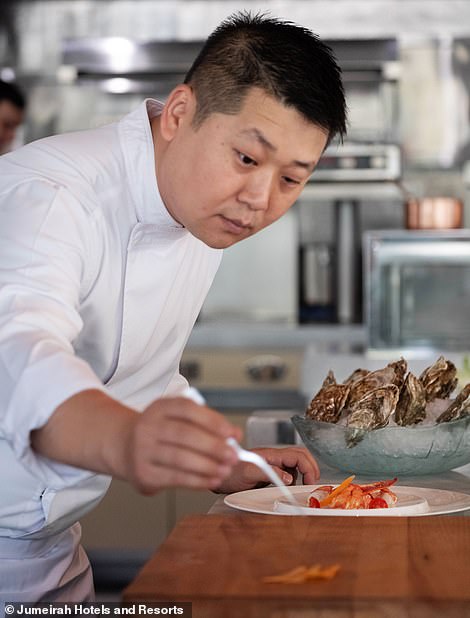 But in January last year, Chief Executive Officer of Jumeirah Hotels and Resorts, Jose Silva, decided sophisticated tourists should be given the opportunity of visiting a hotel to experience ‘exciting dining’.

The first step in his mission was to recruit, 18 months ago, Michael Ellis, former Managing Director of the famed Michelin Guides, as Chief Culinary Officer.

His little black book of celebrity chefs was key to realising Silva’s vision. And now Semblat and Joinie-Maurin have brought their skills to the Jumeirah kitchens.

Chef Francky had three Michelin stars and Chef Kim two, from previous establishments, before being snapped up to work at the Burj. 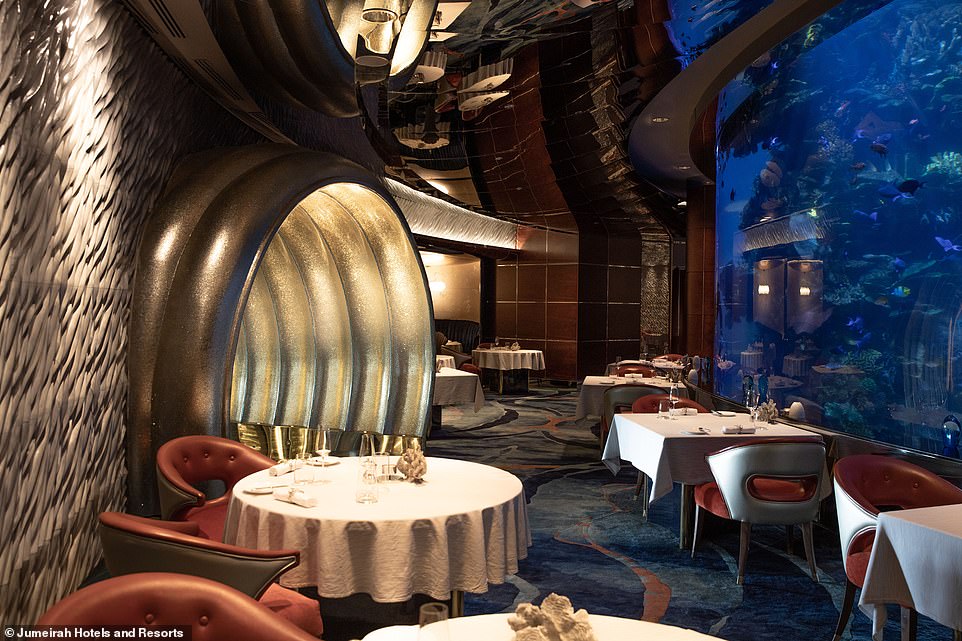 Both were protégés of the Joël Robuchon school of excellence. Joinie-Maurin spent 12 years working at Robuchon restaurants before joining the Burj Al Arab as head chef at the Al Mahara seafood restaurant. Meanwhile, Semblat has presided over a stunning ‘relaunch’ of the 27th floor Al Muntaha restaurant.

Manager Xavier Gonet explains much is made of the panoramic views over the Arabian Gulf, but the aim is to create such a superb gastronomic experience that guests ‘forget the view and concentrate on the food’.

Having spent 24 years working with the famed Robuchon, Semblat says, ‘a little of his inspiration is in almost all my dishes’. The tasting menu, a choice of five or seven courses with optional wine pairings, begins with a light-as-air burrata amuse-bouche with tomato and basil ‘essence’, topped by a tiny jewel of a tomato.

Each course is a master-class of culinary technique, but highlights include the Salmon Tartare with Caviar and Shiso – a miniature gold toast-rack holds bread ‘crisps’ and a piece of edible gold leaf decorates the sublime tartare. Also the Wagyu Tenderloin with Virtual Béarnaise and Blow Crispy Potatoes, where the three main elements of béarnaise are separated next to a mouthful of extraordinarily intensely flavoured wagyu, and delicate potato ‘puffs’. 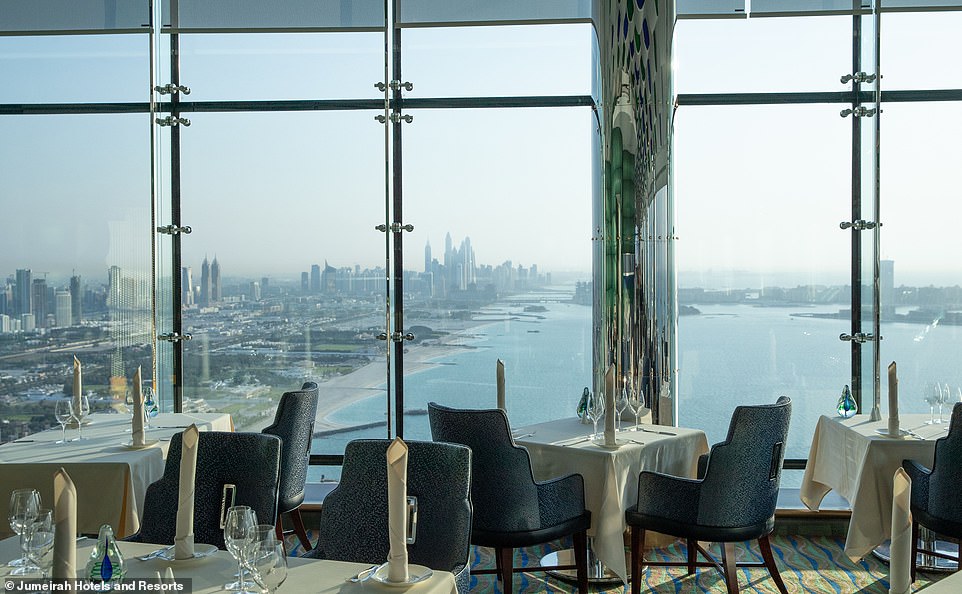 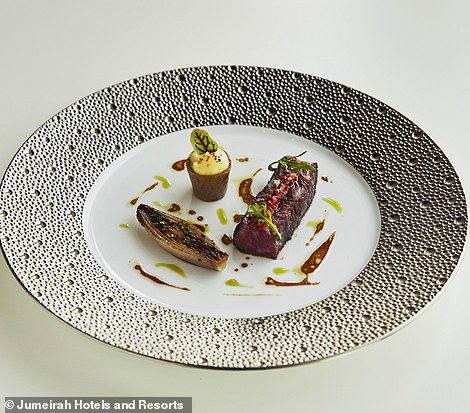 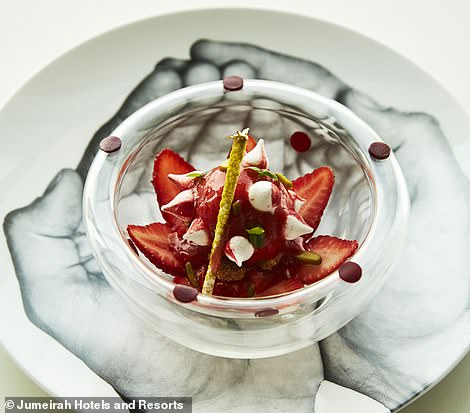 The Wagyu tenderloin, left, which is on offer at the Burj Al Arab’s Al Muntaha restaurant. Pictured right is the strawberry dessert, which Ian says includes a ‘divine sorbet and strawberry confit’ 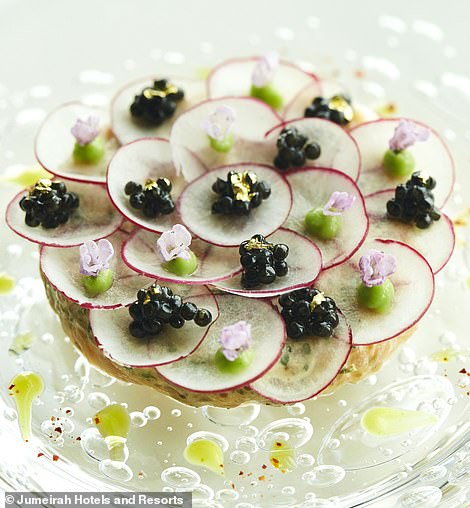 Strawberry dessert, a divine sorbet and strawberry confit studded with tiny meringue corns, was the finale to an evening of faultless culinary creativity and execution. I could only agree with Monsieur Gonet, the view is good, but the food is better.

The Burj has its own helipad, sits on a purpose-built island, has several pools, 24-hour butler service, a staff-to-suite ratio of 8:1 and enough gold leaf to make Midas himself happy – on furniture, in drinks, even the coffee machines are gold plated.

Sumptuous bathrooms have full-size Hermes his-and-hers toiletries, gold plated scales, walk-in showers and colossal Jacuzzi baths the butler fills on request – none of that pesky turning the taps on yourself. It’s no surprise that a hotel that is home to cutting-edge engineering, from a unique man-made beach to the world’s tallest atrium, now has equally lofty goals for its dining experience, which has undergone a transformation over the past 12 months.

But the Burj is not the only part of the Jumeirah empire where diners can now look forward to a top-of-the-range culinary experience. Walking back over the exclusive Burj bridge, which separates the hotel from the mainland, I was able to see the new food and beverage strategy in action at the five-star beach-fronted Jumeirah Al Naseem Hotel.

Part of the huge Madinat Resort and with spacious, light-wood, contemporary interiors it contrasts sharply with the colour and gold of the Burj. But it has undergone an equally thorough Silva/Ellis makeover of its food and beverage outlets.

First up for a ‘root and branch’ revamp was Rockfish, the beach-side Italian seafood restaurant with outstanding views of the Burj Al Arab that’s just a stone’s throw away.

Blonde wood, cool cream marble, aqua toned tableware, and superb staff welcome guests, but it is the skill of yet another Michelin-starred chef, Marco Garfagnini, that tantalises the taste-buds and makes this a stand-out dining experience. Chef Marco received his first Michelin star at the age of 25 and became Executive Chef for Jumeirah Al Naseem in 2019. 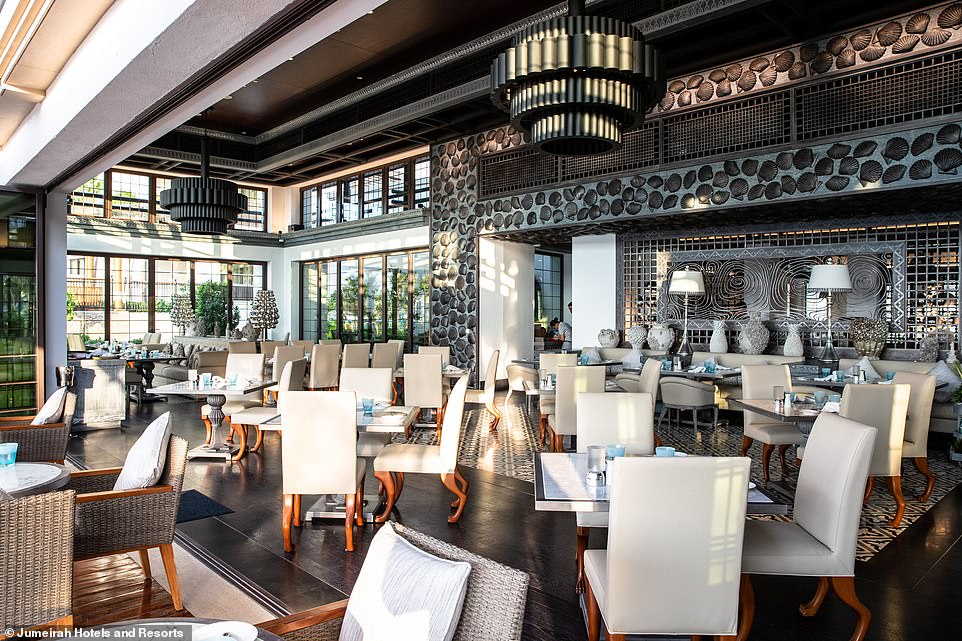 The revamped beach-side Italian seafood restaurant Rockfish at the five-star Jumeirah Al Naseem Hotel. The menu has a focus on crudo (meaning ‘raw’ in Italian) food and seafood 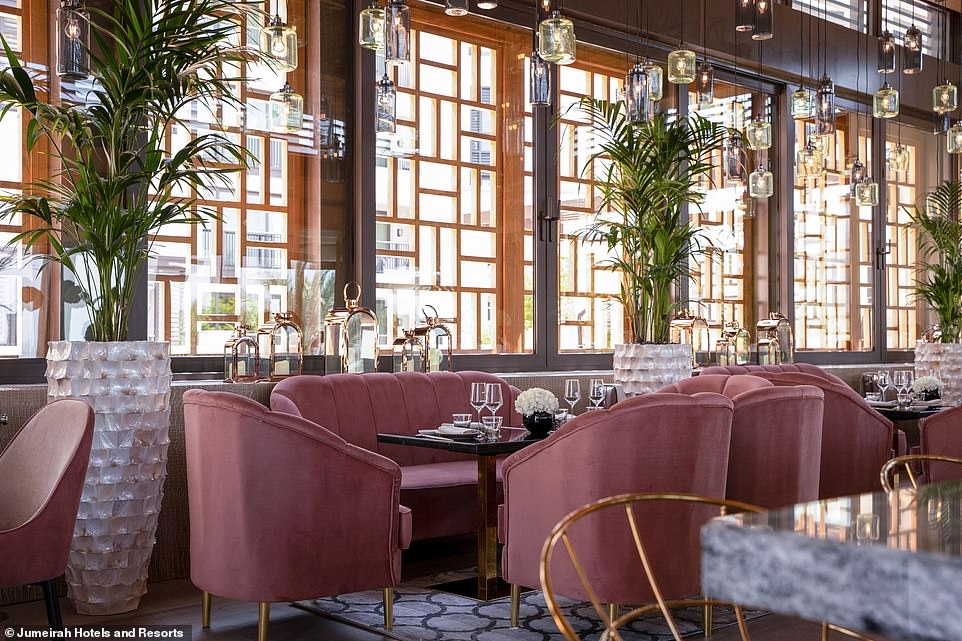 Jumeirah’s first ‘pop-up’ restaurant, Kayto, pictured, also at Al Naseem, which Ian says has been an unqualified success since its October opening

His menu has a focus on crudo (meaning ‘raw’ in Italian) and seafood, though classic Veal chop Milanese and free-range baby chicken with polenta Florentin, make an appearance. The freshly baked breads – foccacia with dried tomato and olives was perfect – came with addictive aubergine caviar (secret ingredient apple and pear vinegar).

A taste of line-caught seabass and chicken plin ravioli, with Parmesan cream, veal jus and truffle left me in little doubt that few people could be disappointed with this menu.

With Expo 2020 expected to bring an influx of visitors to Dubai, Ellis acknowledges: ‘We have made a lot of changes and we are under pressure to deliver.’ He praises the group’s ‘brilliant’ chefs, but emphasises there is no room on the team for those that don’t buy-in to the new sharper focus on food.

Jumeirah’s first ‘pop-up’ restaurant, Kayto, also at Al Naseem, has been part of the new strategy and an unqualified success since its October opening.

Japanese-Argentinian chef Cristian Goya specialises in ‘Nikkei’, a fusion of Peruvian and Japanese cuisine and with live DJ sets six nights a week the atmosphere is lively – like the food. Highlights include sea bass ceviche, leche de tigre and Peruvian corn, Kagoshima wagyu, Kayto sauces and Saikyo miso black cod. Scheduled to end in May I can see Kayto winning an extension. 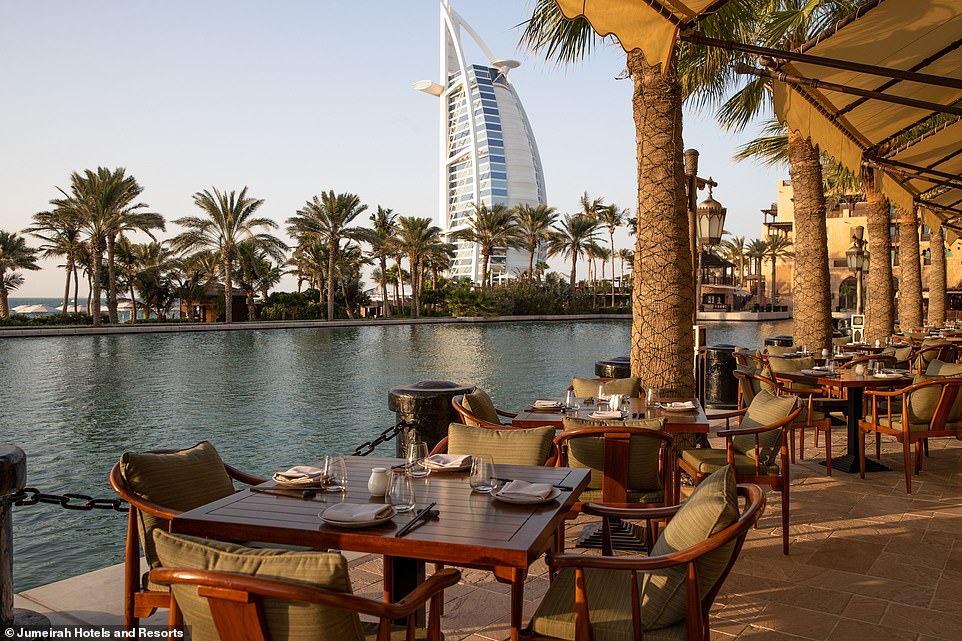 Chinese eatery Zheng He’s, pictured, relaunched under Chef Lai Min Wei at the Jumeirah Mina A’ Salam hotel. It has views of the Burj Al Arab 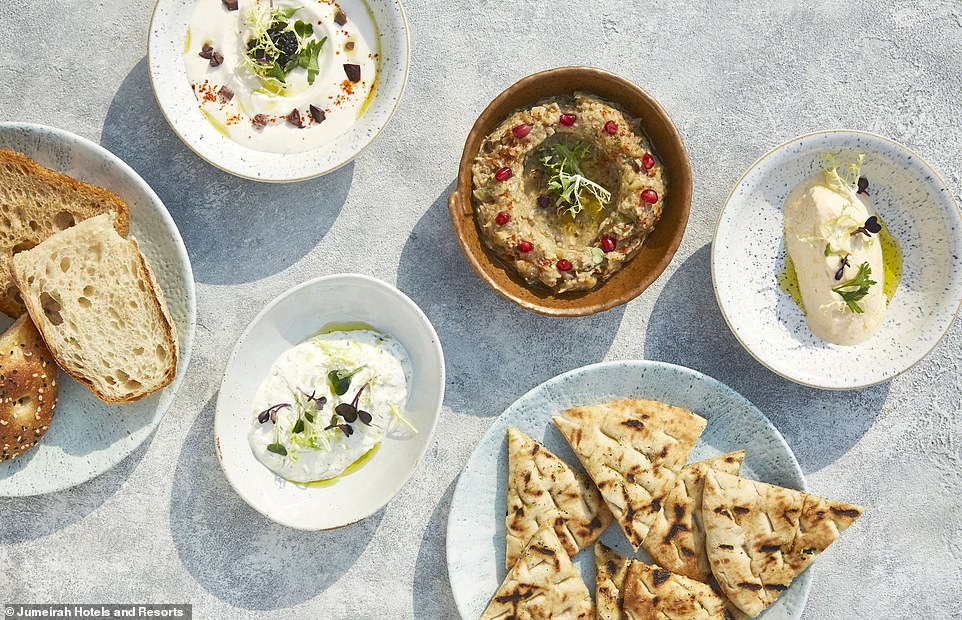 Ian also enjoyed a meal at Shimmers, a Greek beach restaurant at Jumeirah Mina A’ Salam. Pictured are some of the dishes on offer

With four hotels and over 50 restaurants at the resort, Ellis’s work is never done and mainstream outlets have also come under the microscope.

Chinese eatery Zheng He’s, relaunched under Chef Lai Min Wei, is a recent hit. His dim-sum and Peking duck are flawless, while other dishes with a contemporary spin – blue lobster dumplings with caviar and lemongrass, wagyu truffle puff and a green matcha tea fondant dessert – are deliciously different.

A long walk along the beach to help my waistline took me past Shimmers, a Greek beach restaurant ‘revitalised’ by Crete-born Chef Nikolas Bragoudakis and the perfect choice for the last meal of my trip.