As I take in the glorious sea views in the Lymington-Keyhaven Nature Reserve, a plaque catches my eye which bitterly complains of ‘a glaring injury to the beauty of the shore’. The words on it were written in 1791, by a vicar aggrieved by Hampshire’s booming salt industry that blighted this coastline at the time with giant vats of brine, wind pumps and boiling houses spouting smoke.

Salt was produced around Lymington from Roman times to 1865, when the powerhouse producers of Cheshire then gained supremacy. The wealth generated by the salt, which was exported as far as Newfoundland, is still reflected in the town’s fine Georgian beauty.

But that vicar would have been very happy with his view now, as the brackish lagoons, sluices and mudflats of the nature reserve create an idyllic coastal spot, home to rare flowers and nesting birds.

Shore thing: Beach huts along the front, above, at Milford on Sea

Twitchers swoon at the black-tailed godwits, curlews and lapwings, the shelducks, oystercatchers and skylarks. Samphire, sea pink and campion flower on the sea wall, and the passing clouds are reflected prettily in the many ponds.

It is pretty much heaven. While many of us have childhood memories of camping jaunts to the New Forest, it is often forgotten that Britain’s smallest national park also has 43 miles of coastline – and this is what we are here to rediscover.

My friend Lucille and I are biking around with Adriaan Laubscher. This gentle Afrikaans entrepreneur and his family have adopted the coastline as their own in recent years, and their bike hire store, New Forest Bikes, is on the cobbles in Lymington Quay. You can whizz off from here – on your own or accompanied by a guide – on a range of mountain, electric and kids’ bikes.

There are about 100 miles of cycle trails in the area. We speed past seawater baths, salt marshes, ponds, coastal grazing marshes and handsome coastal pads. It feels good to be alive on two wheels.

The New Forest’s claim to fame is that it was the mini-break choice of William the Conqueror, who resided in Winchester. By 1079 he had quelled the English and was ready for a spot of hunting and wenching. When he glimpsed the New Forest’s deer-filled heathland and wild woods, he knew he had found his happy place. Nova Foresta, as the Domesday book recorded it, became a royal playground, jealously guarded for an elite few. 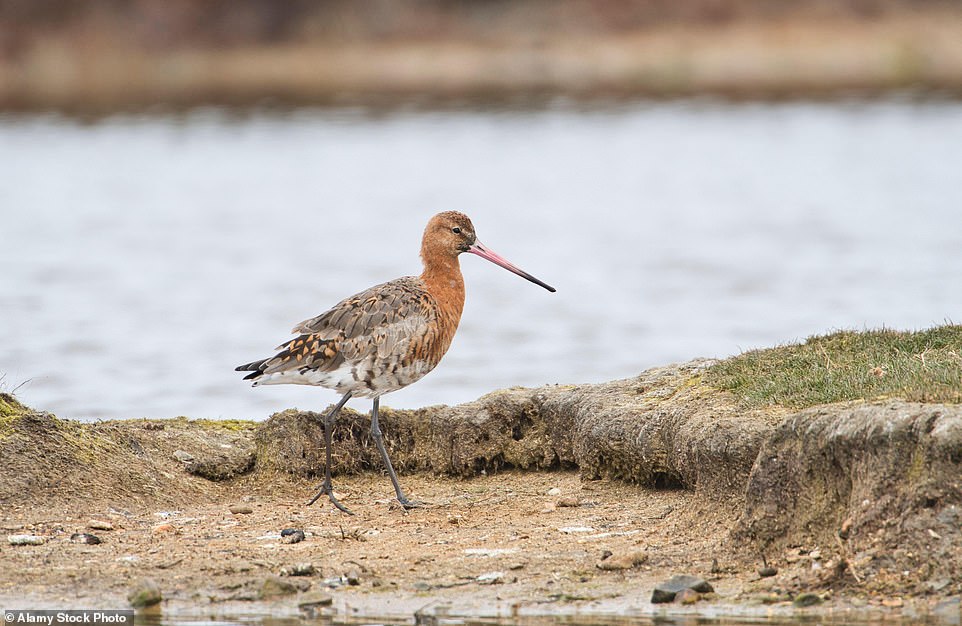 Black-tailed godwits (pictured), curlews and lapwings, shelducks, oystercatchers and skylarks can be seen at the Lymington-Keyhaven Nature Reserve

In some senses, little has changed. This is the preserve of wealthy retirees and private estate owners. But its ancient glades are as they have always been – deers graze under canopies of oaks, and wild ponies roam.

We stay at the Montagu Arms Hotel in Beaulieu – a little inland at the head of the Beaulieu river.

The 13th Century village of Beaulieu grew up around the abbey that was founded by Cistercian monks. Following the 1530 dissolution of the monasteries, Henry VIII sold the estate to ancestors of the current owners, the Montagu family. Its last pater familias, Edward, Lord Montagu, opened the estate to visitors and began displaying vintage cars owned by his father, and in 1972 it became the National Motor Museum, now housing more than 250 cars from all over the world. 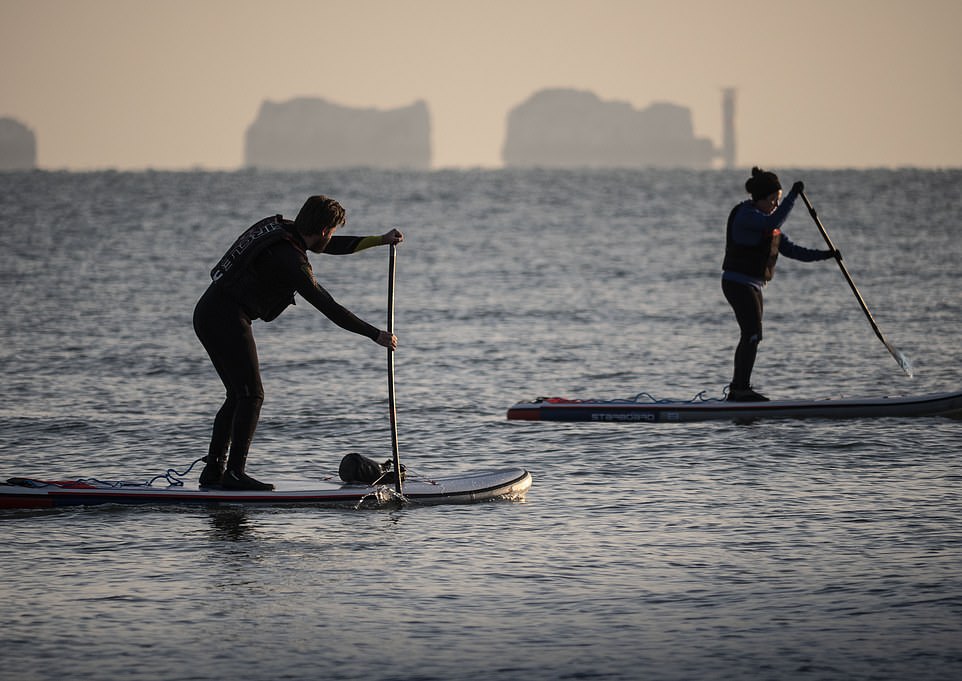 Lydia went paddleboarding in Keyhaven. She said it was a ‘meditative experience’ (stock image)

His son, the current Lord Montagu – Ralph Douglas-Scott Montagu – can perpetuate Beaulieu’s eccentric idiosyncrasy as he wishes, because he owns the lot.

Donkeys wander the town, munching on grass while stopping the traffic. The location managers for the Harry Potter films probably had it down in their notebook as ‘spare wizarding village’.

Pottering around the shops confirms it. Queensmead is an old-fashioned sweet shop selling Fizz Bombs, Stingers, Fruit Salads and Black Jacks; Belle & Blossom is a magical little florist; Bellalocus sells hand-made tea towels and pretty homewares. Admiring the bird baths at Fairweather’s, the picture-perfect garden centre, we chat to a local who informs us that Lord Montagu is fastidious about keeping things as they are. ‘Basically you can’t sneeze without asking his permission,’ he says, cheerfully. 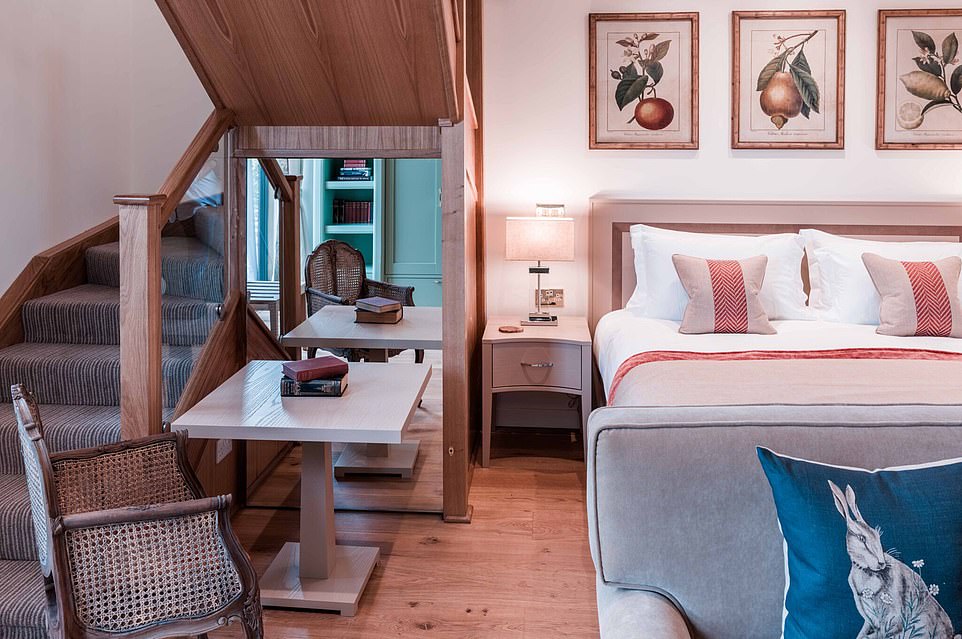 Inside a room at the family-owned Montagu Arms Hotel in Beaulieu, which is ‘friendly and relaxed’

The Montagu Arms Hotel is family-owned and, while friendly and relaxed, it purveys an unbroken sense of the past, from the grandfather clocks to the panelling and kippers for breakfast.

A suggestion that you might be in the 21st Century leaks in via Matthew Whitfield’s stellar cuisine. His four-course treats and tasting menus are the crowning culinary glory of our weekend. Vegetables are from the kitchen garden, the game and pork are from the park and the fish from the South Coast. New Forest strawberries and spelt and parsley risotto with shallots and Old Winchester cheese convey the juicy fulfilment of spring in just one bite.

The morning after our feast we skip breakfast to go paddleboarding at Keyhaven, outside Milford on Sea. This peaceful, unassuming little village looks across to Hurst Spit and Castle and the Needles of the Isle of Wight. We find Sean Scott, the young paddleboard enthusiast who runs The New Forest Paddle Sport Company, working out of a container at the harbour. 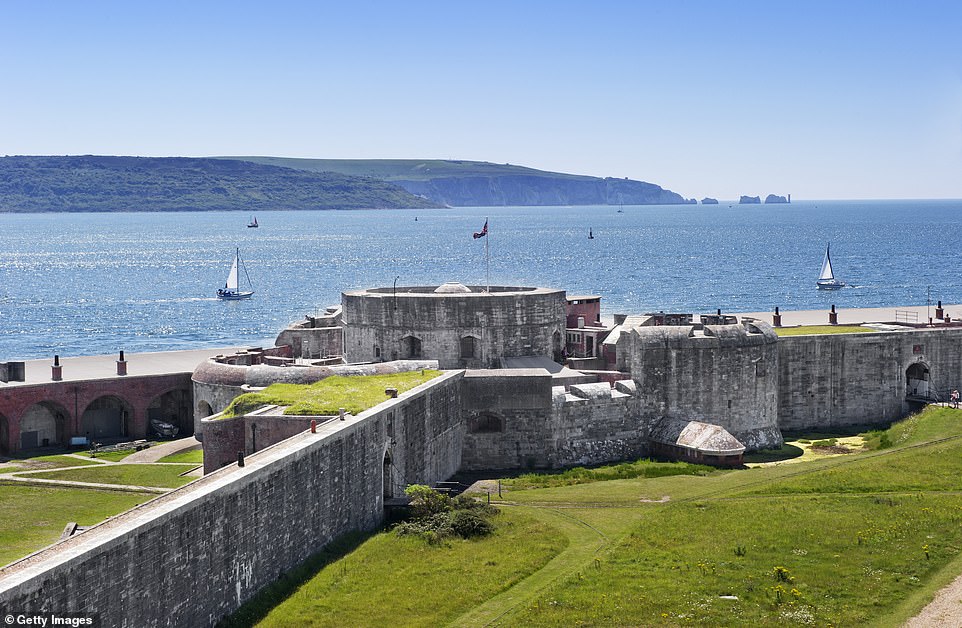 Sea wall: From Hurst Castle, built by Henry VIII, visitors can see across to the Isle of Wight

It turns out that stand-up paddleboarding (known as SUP to the regulars) is a breeze once you forget that you’re standing upright on an oversized surfboard in the middle of the water. It’s a changeable microclimate on this patch of Britain’s coast, but fortunately Keyhaven harbour is very protected and the water is like a millpond.

It’s a meditative experience once my toes stop gripping the board as if I am teetering off the edge of the Empire State Building. We drift peacefully down the salt marsh channels, waving at samphire foragers.

They do a number of adventurous paddles, including stuff involving surf, but I’m taken by the idea of the full-moon outing. They paddle by the light of the moon alongside the pebbled spit to Hurst Castle, returning at midnight. 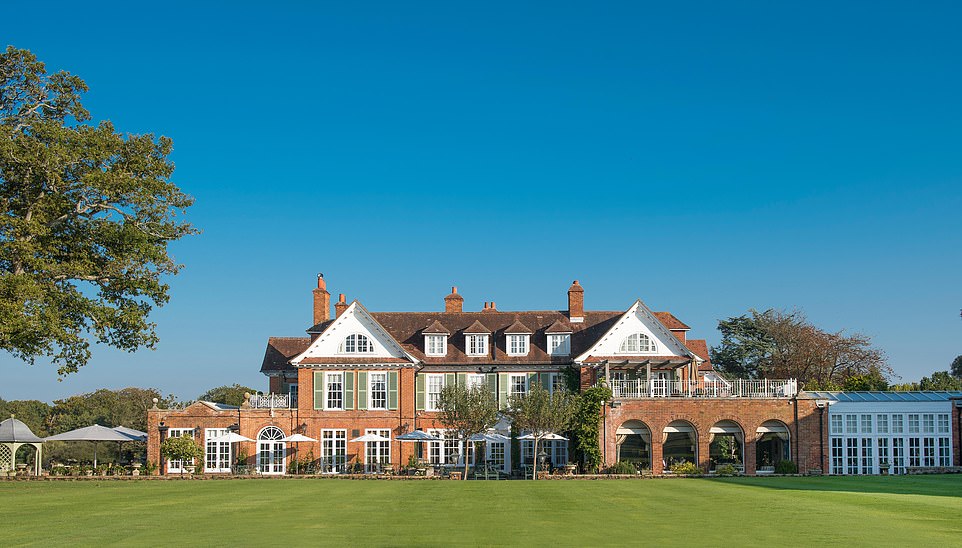 The Kitchen is located at Chewton Glen, above, Hampshire’s most luxurious coastal hotel

Emerging from Keyhaven harbour, we go across the road to revamped pub The Gun Inn. This beauty has a passionate chef whose beef-dripping chip butties, crab mayo sandwiches, salt-aged rib-eye steaks and crock-pot crumbles have the pub full. In its sunny garden, a resident gives me the lowdown on the way of life here. ‘The forest is medieval in more ways than one,’ says Geoff, who is cradling a local IPA. ‘The system of rules and rights that existed a millennium ago are still intact.’

He explains that locals are still called commoners and they have the right to common (keep animals in the park), estovers (the right to collect firewood) and pannage (putting pigs out to scoff the acorns).

After lunch we opt for a little promenading at Barton-on-Sea, which is also the start of the epic 60-mile coastal path, the Solent Way.

A Victorian entrepreneur developed Barton-on-Sea, but his large brick hotels have been replaced with apartment buildings now.

We walk fast along the blustery sand-and-pebble beach, a catwalk for pomskis and cockapoos, trying to build up an appetite for tonight’s show: The Kitchen at Chewton Glen, Hampshire’s most luxurious coastal hotel.

That evening the barn-like restaurant is crammed with visitors who cannot wait to get their chops around chef James Martin’s food.

Feeling fully justified in tucking in after a weekend spent cycling, paddleboarding and walking on this lovely coast, we put away double macaroni and cheese, a whole lemon sole, baby spinach lashed with Grana Padano and yuzu miso dressing, a salad of wood-roasted asparagus with Winchester watercress, oh, and a knickerbocker glory.

It hurts our bellies – I recommend wearing something elasticated – but it’s worth it.