Discovering the wonders of Sri Lanka in style and comfort

Dawn is still just a smudge of rouge on the horizon, but at the port of Mirissa on Sri Lanka’s southern coast, an unusual daily challenge for locals is under way: how many tuna can you fit on a tuk tuk?

The rules seem simple: buy as much of that day’s catch as you can from the extravagantly-decorated boats jostling for a berth in the harbour, pack it on to your three-wheeled scooter and drive away at speed.

Easy does it: An elephant ride near Sigiriya Palace

My family and I are here not to observe John West’s delivery squad, but to climb aboard the 50 ft catamaran Jade, which waits for us at the far end of the quay, and head a few miles offshore for Mirissa’s other great sport: whale watching.

We’re in luck. Sort of. Though the mighty humpbacks and blue whales that cruise these waters are on a day off to the deep, our skipper spies a pod of smaller pilot whales and we spend a magical half-hour tracking alongside them as they bob and dip obligingly for the camera. That’s another of Sri Lanka’s attractions ticked off the list. We’re going to need a big sheet of paper.

A few days ago we had been alongside elephants and leopards, camping out on safari in the north of the island.

Before that, it was a hike up Sigiriya rock fortress, a monument that must rival Machu Picchu as a gob-smacking wonder of improbable construction. Next stop: on to the central highlands, chugging through the tea plantations on one of the world’s most scenic train rides. Oh, and did I mention the white-water rafting?

So much to see. So much to do. So isn’t it all a little exhausting? This is Sri Lanka, after all, where tropical heat and occasionally erratic infrastructure can conspire against relaxation.

Ah, but if you want to make the most of all ‘the Teardrop Island’s’ attractions (look at a map and the name makes sense), hiring a driver-guide for the duration of your stay, and choosing a reputable travel firm to sort the itinerary, means that family parties can see Sri Lanka not just in comfort and safety, but in style. 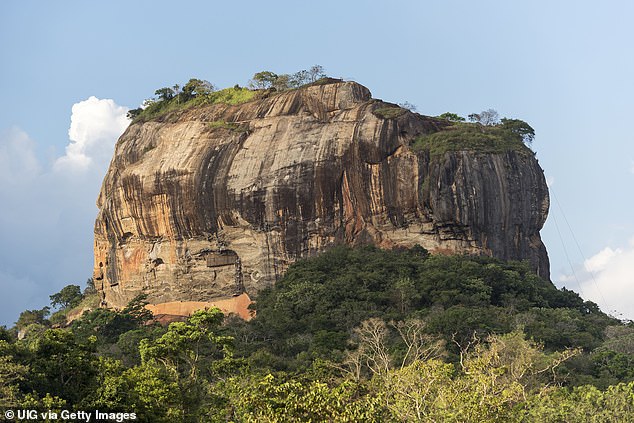 Sigiriya rock fortress, pictured above, is a ‘monument that must rival Machu Picchu’

That was what swung it for my family as we debated where in the world we would go for one last big adventure, before our daughter headed off to university and our 16-year-old son decided the whole concept was ‘like, totally not cool’.

The man tasked with shepherding us around was Parweez, who was waiting for us on arrival in Colombo and, over the course of our 12-day trip, became the fifth member of our family.

Hugely knowledgable and articulate, he would entertain us for hours on end with tales of Sri Lanka’s past and present. Our son Adam, in particular, would delight in trying to catch out ‘The Parvster’, as the poor man became nicknamed, by asking the most random of questions.

‘Parvster, what type of tree is that?/how exactly is rubber made?/ where’s the nearest shop that sells designer knock-offs?’

Like a human version of Alexa, he was never once lost for words.

We started our adventure in the country’s ‘Cultural Triangle’, home to many of its most awe-inspiring ruins. With temperatures soaring to the high 30s by midday, early starts are essential (cue groans from the teenage contingent).

On arrival – The Wallawwa

Surrounded by elegant gardens, yet just a short hop from Colombo airport. A perfect introduction to Sri Lankan hospitality and your first ‘breakfast hopper’ (a crispy pancake basket with baked eggs). 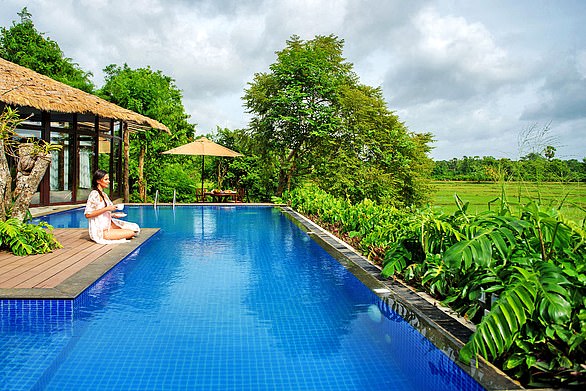 Green with envy: One of the private plunge pools at Ulagalla resort in Sri Lanka

Luxury with a traditional twist. On arrival, you don’t just sign in: you’re greeted with an entire ritual of bell-ringing and candle-lighting. Vast rooms with private plunge pools (pictured) look out over paddy fields and forest.

On its own private headland, overlooking the surf, rooms with hardwood floors and spa-sized bathrooms attract many a visiting celebrity.

A nine-bed boutique hotel straight out of the pages of Architectural Digest with staggering mountain view.

A marvel of thoughtful restoration. Rooms arranged around a leafy central courtyard offer a cool and chic respite.

A 200-year-old converted manor house surrounded by (and infinitely more characterful than) the towering new skyscrapers of the metropolis. Host to a fine-dining restaurant that attracts the city’s smart set.

Sigiriya, built in the 5th century as a king’s fortress, involves a steep climb up a metal staircase bolted to the rock face, where vertigo is not the only threat.

‘Notice: when bumble bees attack, visitors are not allowed to proceed beyond the lion’s paw,’ read a surreal notice on the way to the summit.

The staggering views from the top are reward enough as you marvel at how this place could once have been home to 500 concubines, with what must be the world’s first infinity pool to splash around in. ‘Parvster: how DID they get the water to the top?’

Our own palace of pleasures was Ulagalla, a hotel whose luxurious chalet rooms are set around 58 acres of paddy fields. Wallowing in the vast pool, you are watched over not by concubines but the resident troupe of Grey Langur monkeys.

Next stop: Wilpattu National Park, an area of the island hitherto off-limits during the country’s 26-year civil war. While the southern tip of the island claims some of Sri Lanka’s most popular safari hotspots, Wilpattu is unique for its varied habitat of jungle, grassy plains and ‘Villu’ lakes that play host to a cornucopia of wildlife — including the ‘big three’: elephants, leopards and sloth bears.

With my wife never wanting to stray too far from a hot shower and a comfortable bed, we stayed at the Leopard Trails camp, where ‘being under canvas’ comes with a few indulgent extras such as gourmet meals, crisp white sheets and a cocktail waiter. They also have some of the best specialist wildlife guides and Jeep drivers you need to enter the park. (A blessed break for The Parvster).

We hit the jackpot on our first drive, with a leopard stalking out of the undergrowth almost alongside us, as silent as a shadow. And around the next corner, a sloth bear was standing on the track.

‘He’s a big one,’ said our guide. ‘How can you tell it’s a male?’ asked my wife. And right on cue, up he reared on to his hind legs to give us a most impressive display of his Gentleman Bear Necessities.

Subsequent drives at dawn and dusk were less dramatic, but nonetheless provided a staggering challenge as we sat around the flickering lanterns at dinner, struggling to name all the creatures great and small that we’d seen. 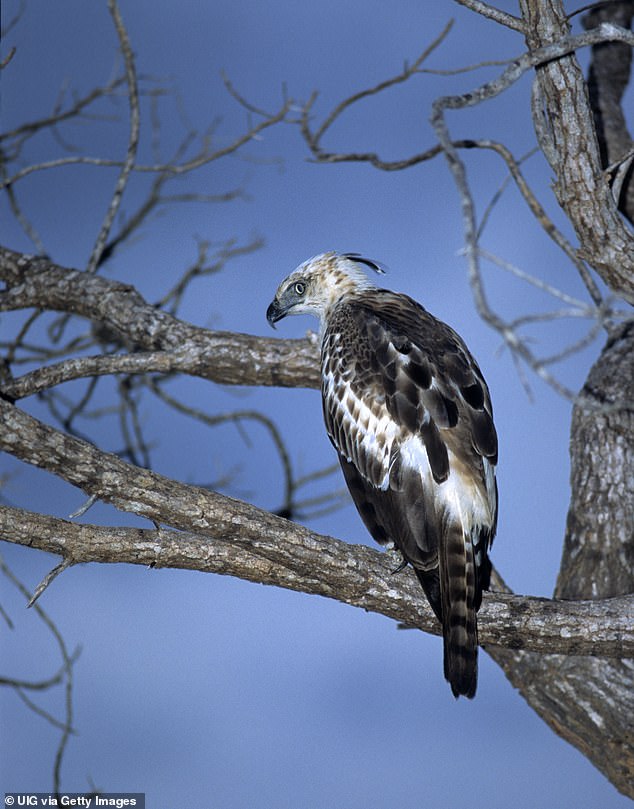 By Day 8, via a whistle-stop visit to the ‘Tea Country’ highlands (possibly a step too far on a 12-day itinerary, though we did adore the train ride) we were ready for a little R&R.

Point the minivan to the coast, Parvster. Destination: Weligama and Galle — a must-see fortress town on the South-West coast where the colonial past (British and Portuguese) is embraced in style, not least in our hotel, a former bazaar, lovingly restored into boutiquery at its best.

The miles had been many, the itinerary action-packed, but as we approached the end of our Sri Lankan odyssey we had one final adventure left in store: a village cookery lesson, to learn how to recreate the spicy sambal pickles, rich dhals, and fragrant coconut-infused curries that had fuelled us along the way.

As we licked every last morsel from our banana leaf-lined bowls, there was one question on our lips that even Parweez couldn’t answer: when can we come back?

Sri Lanka In Style (00 94 11 239 6666, srilankainstyle.com) offers 13 nights from £4,300 pp, based on two sharing, including return flights, all transport with English-speaking guide, plus visits to Sigiriya rock, cooking classes and private whale watching.