Elizabeth Holmes appeared in court on Wednesday to face charges for defrauding investors out of billions with her fake blood testing technology.

The disgraced Theranos founder looked fresh and relaxed despite the fact that she faces up to 20 years in prison and millions of dollars in fines when the case goes to trial next summer.

Holmes’ blonde tresses were blown out and loosely curled, framing her face with only a touch of makeup. She kept her outfit simple with a basic black dress and black blazer.

Prosecutors allege that Holmes and Balwani deliberately misled investors, policymakers and the public about the accuracy of Theranos’ blood-testing technologies from 2003 to 2015.

US District Court Judge Edward Davila ruled last month that the trial will begin on July 28, 2020. The purpose of Wednesday’s pre-trial hearing has not been disclosed.

Disgraced Theranos founder Elizabeth Holmes appeared in federal court for a pre-trial hearing on Wednesday in San Jose, California. She is facing criminal charges for defrauding investors out of hundreds of millions of dollars with her fake blood testing technology 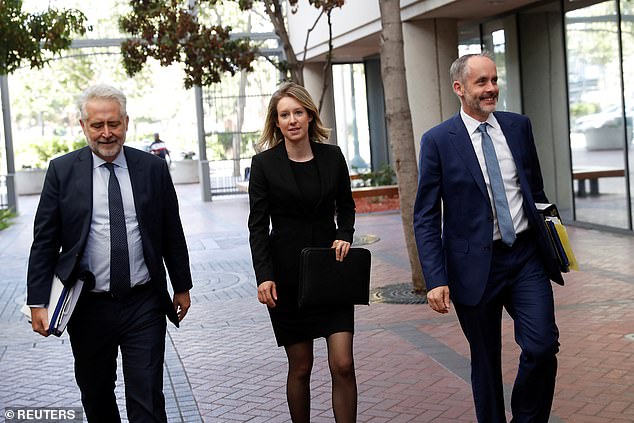 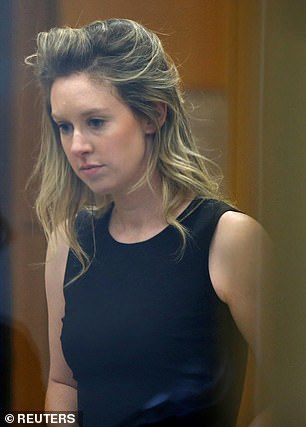 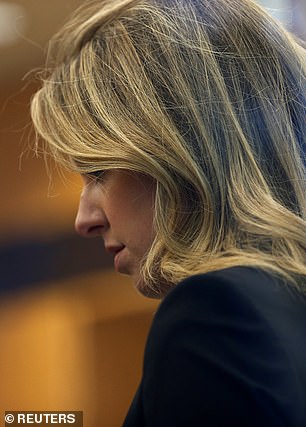 Holmes’ blonde tresses were blown out and loosely curled, framing her face with only a touch of makeup. She kept her outfit simple with a basic black dress and black blazer 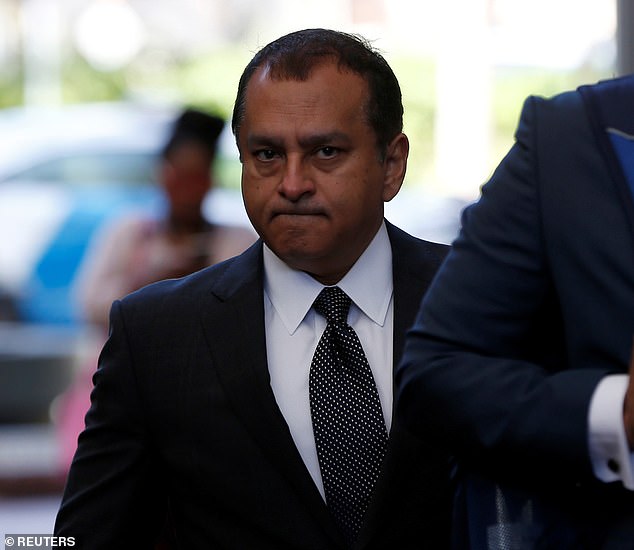 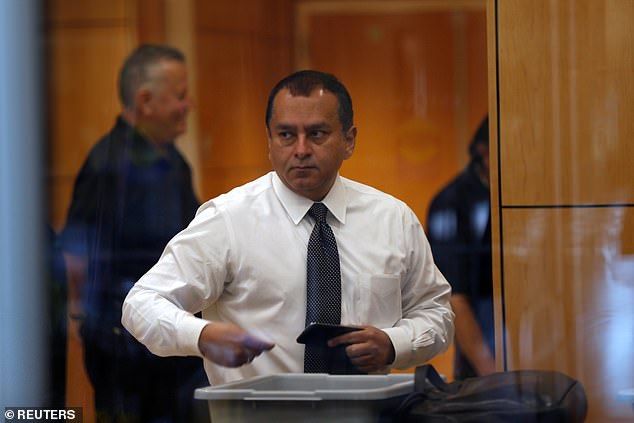 Holmes founded Theranos in 2003 shortly after she dropped out of Stanford University. She said she was inspired to start the company in response to her own fear of needles.

The notoriously-secretive company raised more than $700million from private market investors while sharing very little information about its blood-testing technology with the public or the medical community.

Prosecutors say Holmes and Balwani, who dated from 2003 to 2016 despite a 19-year age gap, promised that the Theranos’ revolutionary ‘Edison’ machine could provide a cheaper way to run dozens of blood tests with just a prick of a finger and a few droplets of blood.

In reality, the technology was still years away from that and the machines actually had accuracy and reliability problems and performed limited tests.

The FBI has alleged that Holmes and Balwani endangered health and lives with their scheme to swindle investors out of hundreds of millions of dollars.

Theranos, once one of the most buzzworthy companies in Silicon Valley and valued at $9billion, went under after its claims were proven to be phony.

It was shut down in late 2018 by the Securities and Exchange Commission, which accused Holmes and Balwani of orchestrating an ‘elaborate, years-long fraud in which they exaggerated or made false statements about the company’s technology, business, and financial performance’. 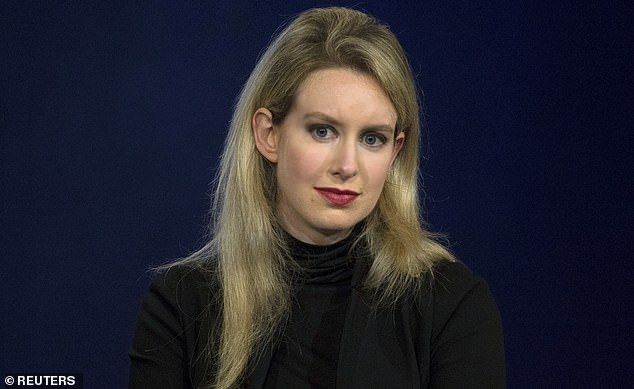 Prosecutors allege that Holmes (pictured in 2015) deliberately misled investors, policymakers and the public about the accuracy of Theranos’ blood-testing technologies 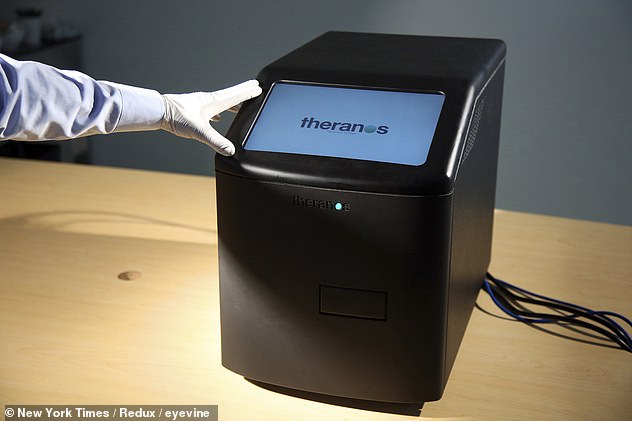 Theranos’ ground-breaking invention, a machine Holmes claimed could perform hundreds of tests on a drop of blood taken from a pin-pricked finger, was exposed as a humiliating sham

Prosecutors said they have already provided more than two million pages of evidence to the defense teams and that there is more to come, the Wall Street Journal reported last month.

Despite ample evidence, Holmes, who was named by Forbes as the youngest self-made female billionaire in 2014, insists that she is innocent.

Her legal team plans to argue that the Wall Street Journal’s John Carreyrou, whose reporting led to the demise of the company, ‘had an undue influence on federal regulators,’ and ‘went beyond reporting the Theranos story,’ Bloomberg reported.

The reporter’s 2015 scoop and subsequent stories revealed Theranos was a threat to public health, and won multiple journalism prizes.

‘The jury should be aware that an outside actor, eager to break a story, and portray the story as a work of investigative journalism, was exerting influence on the regulatory process in a way that appears to have warped the agencies’ focus on the company and possibly biased the agencies’ findings against it,’ Holmes’ attorneys wrote.

Her defense team has also continued to argue over what information should be made available, saying they do not have fair access to documents.

The story of Holmes’ meteoric rise and fall was the subject of a best-selling book by Carreyrou, ‘Bad Blood’, and an HBO documentary entitled ‘The Inventor: Out for Blood in Silicon Valley’.

It showed her disturbing ability to coolly deceive some of America’s wealthiest and most intelligent people and revealed a personality cult around Holmes.

She cultivated herself as the charismatic leader with her penchant for Steve Jobs-style black turtle necks and an uncanny baritone voice.

A Hollywood production starring Jennifer Lawrence as Elizabeth Holmes is reportedly in the works. 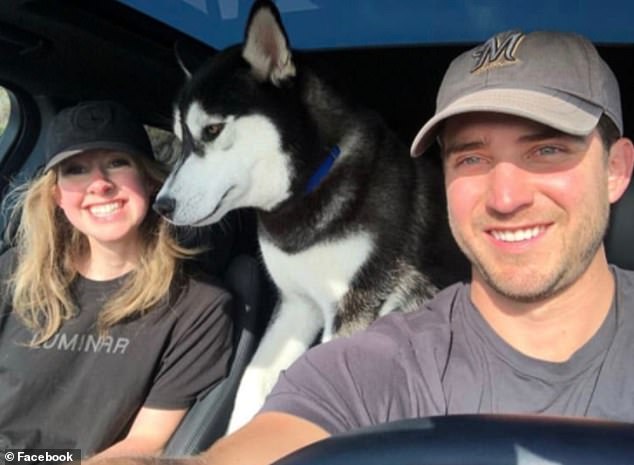 White fang: Holmes with  Evans, the heir to a hotel fortune who worked for the driverless car start-up Luminar Technologies (Holmes and Evans with Balto)

Despite facing up to 20 years in jail, Holmes reportedly got married in secret.

The 35-year-old alleged scammer recently got hitched to her hotel heir fiancé William ‘Billy’ Evans, 27, according to a friend of his.

His image-conscious parents were flabbergasted by their son’s engagement to Holmes at the beginning of the year, according to The New York Post.

‘His family is like: ‘What the f**k are you doing?’ It’s like he’s been brainwashed.’ a colleague told the paper.

A relationship with Holmes ‘will destroy your social value,’ the colleague added. ‘But you will get something else in return’ – namely, fame.

Evans, for his part, reportedly told his friends: ‘The media has it all wrong about her.’