An unhappy shopper in an upmarket town left a one-star review for posh department store John Lewis – because a shop assistant used the word ‘quid’.

Donna Hewer from Cheltenham, Gloucester, visited her local branch of the high-end retail store, but was left ‘disappointed’ by her experience after chatting to one member of staff.

She took to Google Reviews to share her dissatisfaction – calling out the staff member on the language they used when quoting a price.

The unhappy shopper in Cheltenham left a one-star review for John Lewis in the Gloucs. town 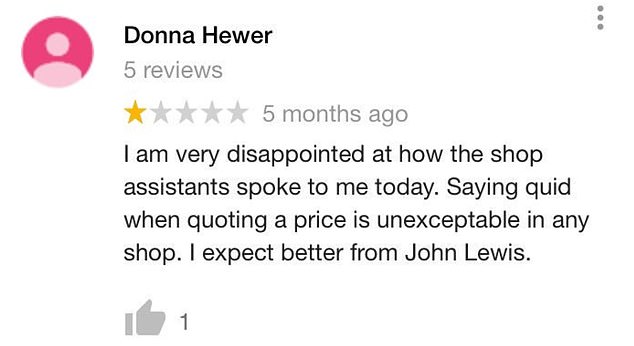 Ironically, Donna also wrote that is was ‘unexceptable’ instead of ‘unacceptable’.

Donna wrote: ‘I am very disappointed at how the shop assistants spoke to me today.

‘Saying quid when quoting a price is unexceptable in any shop. I expect better from John Lewis.’

She accompanied her review with a one-star rating of the Cheltenham branch of John Lewis, which only opened nine months ago in October 2018.

And people on social media were quick to call Donna out on her review – and point out the irony of her misspelling of ‘unacceptable’.

The review was shared on the Twitter page Cheltenham Problems, with the post: ‘As for us, Donna, we’re so disappointed in how you’ve chosen to spell ‘unacceptable’.’

The Tweet has received 284 likes and 42 retweets in just two days, with Twitter users suggesting Donna ‘get over it’. 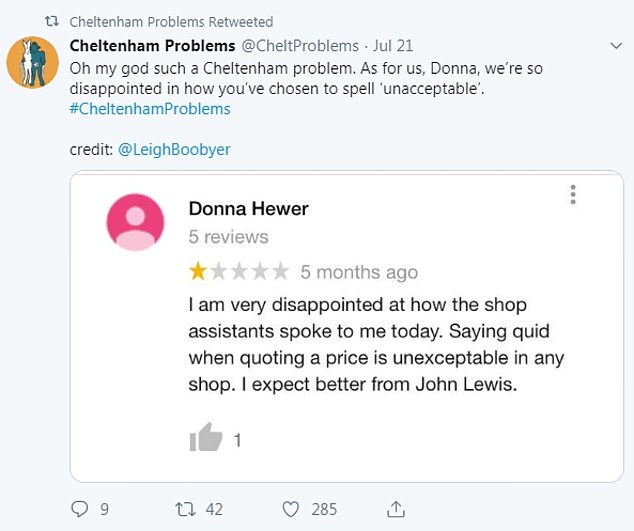 Donna wrote: ‘I am very disappointed at how the shop assistants spoke to me today’ but Cheltenham Problems Twitter page, along with many others, were unsympathetic

Barbara Sue Atwood wrote: ‘Good grief. What century were you born in? Shop assistants are not servants.’

And Mark Conway commented: ‘Maybe John Lewis could give her something Quid Pro Quo for her feedback?’

Other customers have described the staff as polite, pleasant and friendly, and the store as ‘modern, bright, clean and inviting’.

The Tweet has received nearly 300 likes and 42 retweets in just two days, with Twitter users suggesting Donna ‘get over it’ and questioning what century she was born in